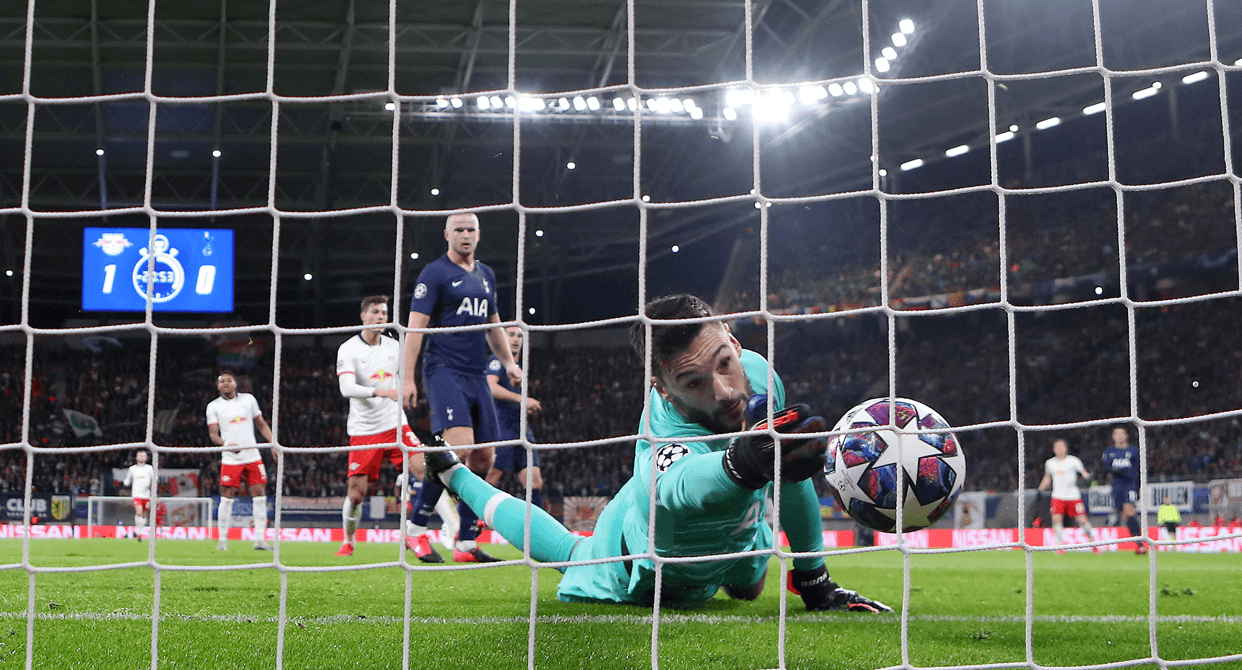 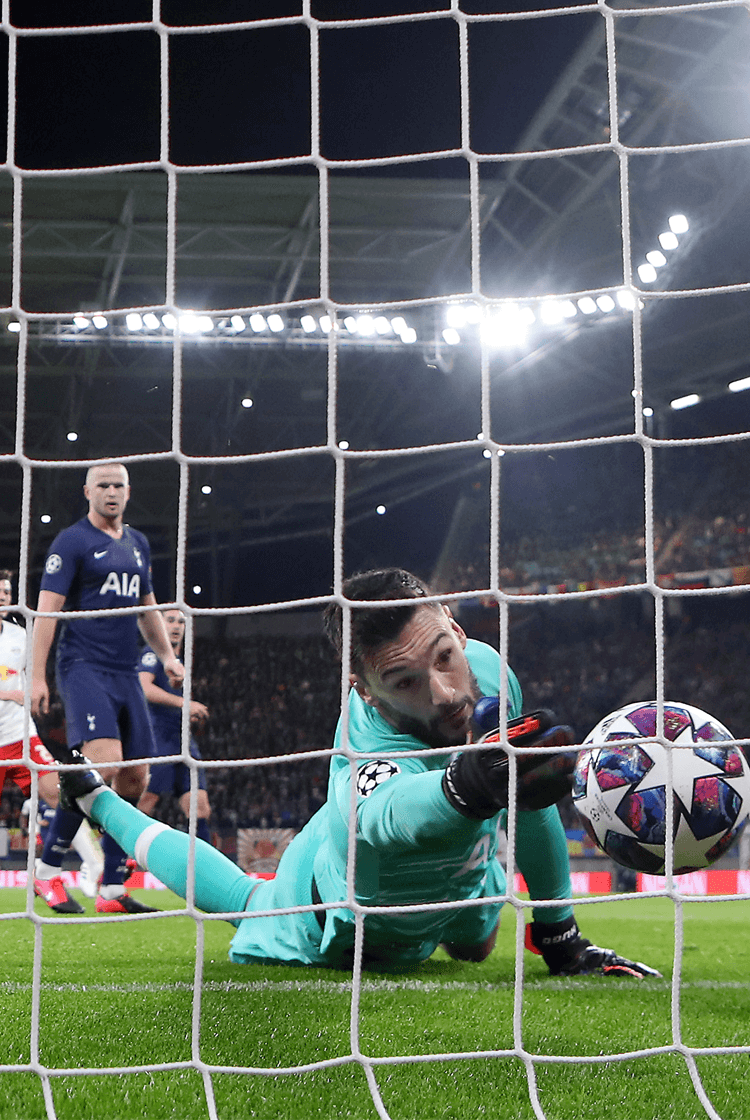 Tottenham again lost to RB Leipzig, to ensure that the Champions League campaign of last season's finallists was ended at the round of 16. Already leading 1-0 from the first leg, Leipzig essentially moved beyond Spurs' reach through Marcel Sabitzer's two goals, which both came when the visitors' goalkeeper Hugo Lloris perhaps should have made saves; a late finish from Emil Forsberg represented his first touch after coming off the substitutes' bench. José Mourinho's team, shorn of injured attackers Harry Kane, Son Heung-min and Steven Bergwijn, are without a victory in six. "It's hard for us to score at the moment," the manager said. "Their physicality is incredible, their defenders win the duels, they stop the game. They are very fast in attack. They can hurt us all of the time, they deserve to go through. We made mistakes that we have analysed in previous matches." "Perfection is difficult in soccer because you'll always make mistakes," said his opposite number Julian Nagelsmann. "But we had control of both legs. We were a bit lazy in the first 10 minutes of the second half but we got more powerful after that." 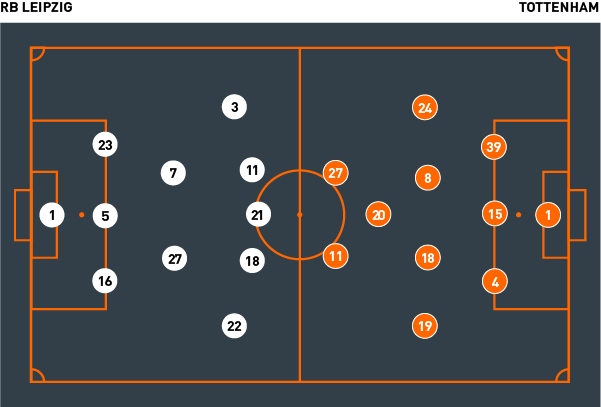 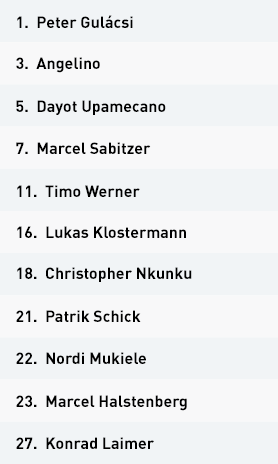 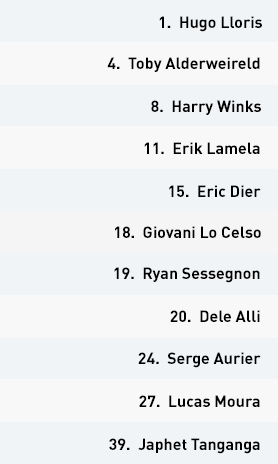 As during the first leg in London, Julian Nagelsmann's RB Leipzig adopted a 3-2-5 while they had possession. Their visitors favoured defending with a 5-2-3, through Serge Aurier and Ryan Sessegnon withdrawing from midfield into defence.

The hosts largely dominated possession, and therefore largely controlled the nature and tempo of what unfolded. They built from defence, via their three central defenders attempting to find the spaces with which they could break lines and play towards the midfielders and attackers in front of them. Marcel Sabitzer regularly advanced from the double pivot in front of that defence and beyond Giovani Lo Celso and Harry Winks to offer another route into the final third, leaving Konrad Laimer to operate as a single pivot, unless Dayot Upemacano advanced from central defence or Nordi Mukiele tucked inside from wide on the right.

Any such rotations particularly troubled Lo Celso and Winks; Spurs also had a wider struggle when, at first, they sought to press their hosts during build-up phases, largely because they didn't convincingly limit the spaces that existed. The higher they sought to apply that press, the larger those spaces between the lines would become, inviting Leipzig to increasingly operate within them.

In contrast to their opponents, if Leipzig's individuals regularly received possession while facing their own goal, they were supported by a teammate capable of receiving in the opposite direction. Their success in posseession owed to the level of support that was offered, and which led to combination play, and a variety of options, contributing to them overcoming Tottenham's attempts to remain disciplined and organised.


Regardless of prioritising offering that support, Nagelsmann's team continued to cover a significant area of the pitch, to ecnourage their wing-backs to attack Aurier and Sessegnon one-on-one, particularly with Aurier's positioning not complementing that of his fellow defenders and the extent to which that left him running towards his own goal. This was particularly evident when Sabitzer scored his second goal, and when a previous effort was disallowed.

Combined with the movement they offered ahead of the ball, that their central defenders contributed so much to their attacks was also influential. Upamecano drove forwards with possession, before exchanging passes to continue to advance, and often drawing an opponent and therefore freeing up a teammate while doing so.

The front three formed of Timo Werner, Patrik Schick and Christopher Nkunku also moved and supported intelligently, often with the intention of creating spaces for Angelino and Mukiele to advance into. It was Leipzig's dynamism, perhaps above all else, that Spurs most struggled with.

Tottenham were organised into a 3-4-1-2 formation by their manager José Mourinho, whose unfamiliar front three consisted of Lucas Moura, Erik Lamela and Dele Alli, the latter as their number 10. They were confronted with opponents who defended with a 5-2-3, through Angelino and Nordi Mukiele withdrawing into defence.

Spurs regularly struggled to establish and retain possession; even when they did so, they then struggled to advance beyond RB Leipzig's aggressive press. The hosts largely operated number for number when applying that press and, when possession travelled to one side of the pitch, the wing-back on the far side would adopt a narrower position to create a four-on-three against Spurs' front three.

If Giovani Lo Celso and Harry Winks are often influential in Spurs' attempts to build attacks, they were struggling to find them in space and therefore became reliant on Alli withdrawing into midfield to offer an additional option there, not least because when he did so far enough Dayot Upamecano resisted the temptation to follow him. It was the shortage of options around the receiving player that too consistently undermined Spurs' ambitions; when an individual succeeded in breaking lines, passes were regularly played to feet, and with the relevant player facing towards their own goal while lacking support.

When he was then surrounded by opponents it became even more difficult to retain possession, and a similar reality applied during transitions. There were occasions when individuals – notably Lamela – were found in advanced positions during transitional moments, but a lack of speed in progressing their attack, often through taking too many touches, invited their opponents to recover their positions and to again pressure their visitors.

Similarly consistent was a willingness, from the hosts, to commit fouls on the occasions Spurs were threatening to advance. One consequence of the visitors' struggles to advance with the ball was their central defenders – Eric Dier, particularly – attempting long passess into the channels for Lamela and Moura to pursue, and with mixed results.

It was from free-kicks that they posed their greatest threat, but these also eventually produced little. Their limited options in possession, the speed of their possession, and their movement around and ahead of the ball was exposed by Leipzig's success in those crucial areas.