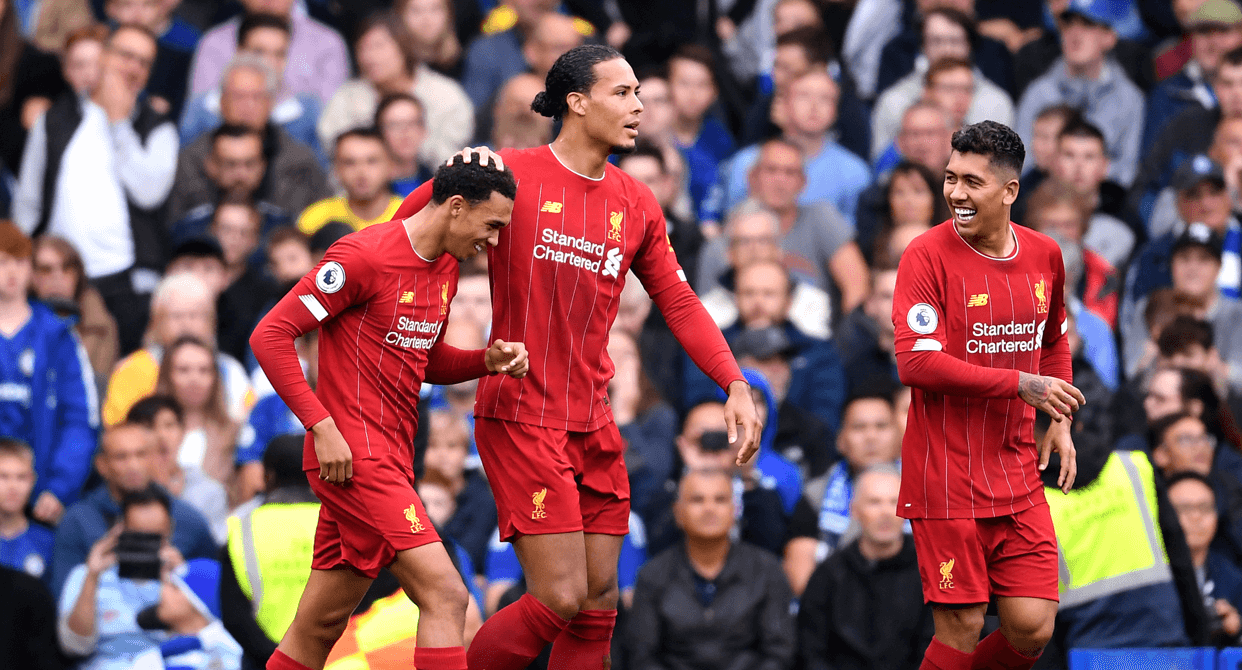 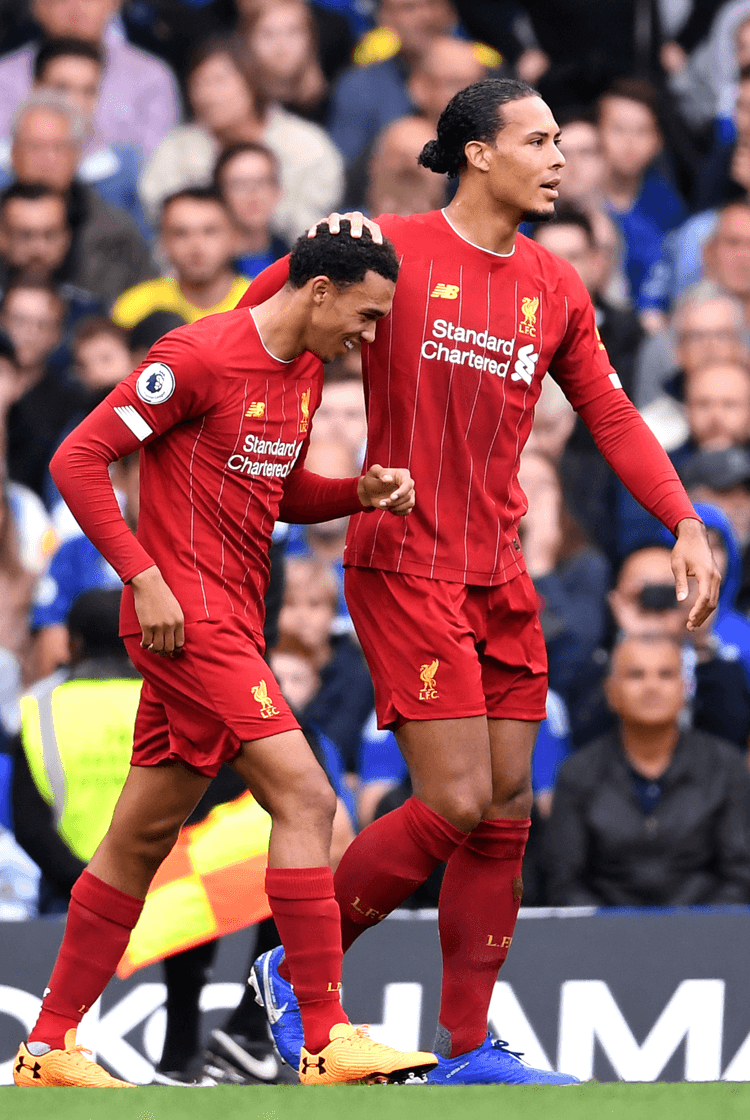 Liverpool became the first team in the history of the Premier League to win their opening six league matches for two consecutive seasons when they recorded a potentially vital victory at Chelsea. The victory was also their 15th successive in the Premier League – a run surpassed only by defending champions Manchester City’s mark of 18. A fine, curling Trent Alexander-Arnold finish from a first-half free-kick gave the visitors the lead and, after César Azpilicueta had an effort ruled out for a narrow Mason Mount offside, Liverpool doubled their advantage through a powerful header from Roberto Firmino. The influential N’Golo Kanté struck in the second half, as Chelsea sought to avoid their second defeat of the week at Stamford Bridge, but Jürgen Klopp’s team held on to restore their five-point lead over rivals City. 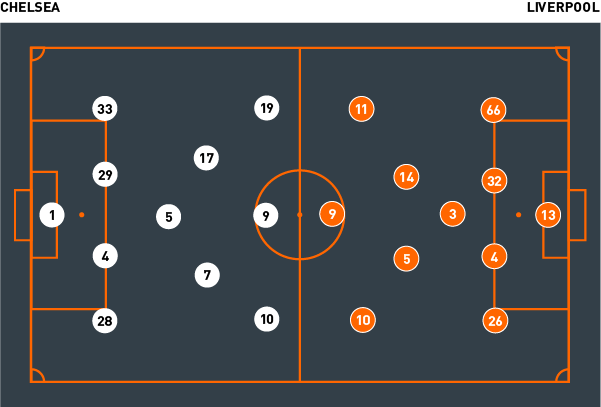 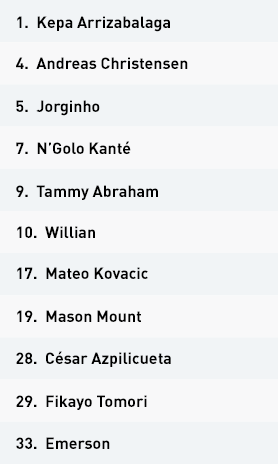 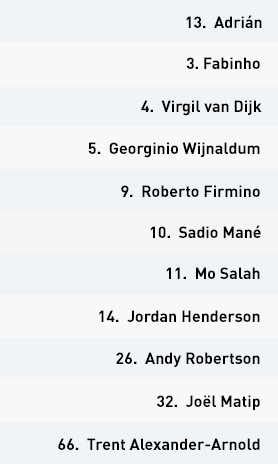 Frank Lampard organised Chelsea into a 4-3-3 formation, having recently experimented with a 3-4-3, and they soon succeeded in playing over the pressure Liverpool applied in the final third. The visitors’ attack pressed on to Chelsea’s withdrawing defenders and goalkeeper; with Jorginho supporting them from his position at the base of the midfield, Fabinho tracked him from within the aggressive man-marking system Liverpool applied from midfield. When that meant the Brazilian left space in front of his central defenders, Tammy Abraham was able to drop and link with his back to goal.

As the lone striker Abraham had mixed success with those passes, because he struggled against the physicality of both Joël Matip and Virgil van Dijk. Liverpool’s defence regardless had to remain compact and advance as their teammates moved forward behind the press of the front three, reducing the space between the lines and inviting penetrative passes in behind. That encouraged Abraham to make forward runs instead of receiving short and to his feet; one such run sent him one against one with Adrian, but a save denied him his best chance to score in the 90 minutes.

It was on the left that Chelsea became more productive. Mo Salah’s advanced role when out of possession encouraged Marcos Alonso – an early replacement for the injured Emerson – to attack. Mason Mount was quick to move inside Trent Alexander-Arnold from his starting position on the left of the attacking three, increasing the space Alonso had to move into. With Jordan Henderson responsible for providing cover and man-marking Mateo Kovacic, any pressing of Alonso was delayed; it was from the left that Chelsea created the finish César Azpilicueta then had ruled out by the Video Assistant Referee.


Liverpool’s shift from a higher press into a compact mid-block contributed to Jorginho being given greater freedom and, as the single pivot, playing more direct balls towards the advanced Alonso. But, with Abraham the only real threat from Alonso’s deliveries, Chelsea required further options. Direct balls to Alonso were quickly pressed by Henderson, who had adopted a deeper role; even Salah had moved back into a more defensive position.

Lampard’s team therefore worked possession into the left inside channel, where Jorginho and Kovacic sought diagonal balls for penetrative runs on the right – from where N’Golo Kanté, with a dribble and superb finish, scored the hosts’ only goal. With the exception of Mount’s late chance from an early Alonso cross, however, Chelsea struggled to really test Adrian in the Liverpool goal and consequently made it four home games without a win at the start of the season.

Liverpool retained Jürgen Klopp’s favoured attacking 4-3-3 structure but, for all of the consistency involved in his selection policy, subtle adaptations were made to counter the threat posed by Chelsea. Mo Salah remained wide on the right in the opening exchanges, when he was supported by the advancing Trent Alexander-Arnold. When moving narrower, he sought to combine with forward runs from Jordan Henderson or switch to Sadio Mané, who made direct movements in between Chelsea’s full-back and central defender from his starting position wide on the left.

Fabinho’s advanced position from his usual role as the single pivot contributed to the Reds taking the lead. He surged through Chelsea’s midfield to release Mané in exactly that position between César Azpilicueta and Andreas Christensen; Mané drew the foul, and Alexander-Arnold scored from the resultant free-kick. Fabinho, typically the deepest of Liverpool’s three-strong midfield, continued to advance and to pressure Chelsea counterpart Jorginho, but as a consequence the gap between the visitors’ defence and midfield grew. Without the cover he provided, their flat central midfield was easily broken with direct balls or third-man combinations into Tammy Abraham; the Reds eventually adjusted by pushing up to nullify those spaces and discouraging Abraham from playing with his back to goal.

It was when Chelsea adopted a 4-4-2 shape that Liverpool were given a free individual – usually Henderson – within inside channels. They soon reverted to a more patient 4-3-3 mid-block, which led to the visitors playing more direct passes from defence, with mixed success. The Reds’ second goal came from a further set-piece, when Roberto Firmino was gifted a free header in among Chelsea’s poor attempts to mark zonally.

Mané’s defensive efforts largely prevented Chelsea from progressing on their right, but on their left Salah’s advanced positioning – from where he was poised to counter behind Marcos Alonso – contributed to space around Alexander-Arnold. Mount or Willian’s movements and runs inside drew Alexander-Arnold and, with Henderson covering Mateo Kovacic, Fabinho again withdrew to provide cover. When that then freed up Jorginho to receive, he was able to target teammates advancing into the space vacated by Alexander-Arnold on the home left.

A deeper block, with even Salah withdrawing more than usual, negated the threat Chelsea posed from this side. This undermined Liverpool’s ability to attack from transitions, but it denied the hosts the space they required to penetrate in behind or combine between the lines as they previously had.

Chelsea’s aerial superiority in defence placed an increasing emphasis on second-ball regains from number eights Henderson and Georginio Wijnaldum to improve possession in the final third. Firmino’s deeper role added further pressure in the pursuit of regains in central areas, and an additional shorter passing option to link with attack after those regains – which, should possession advance, were followed by delayed runs from Alexander-Arnold and Andy Robertson. The three central midfielders would then position themselves in a way that protected against any Chelsea counter-attacks, as Klopp’s men worked to see out an important away victory that maintained their 100 per cent start to the league season.