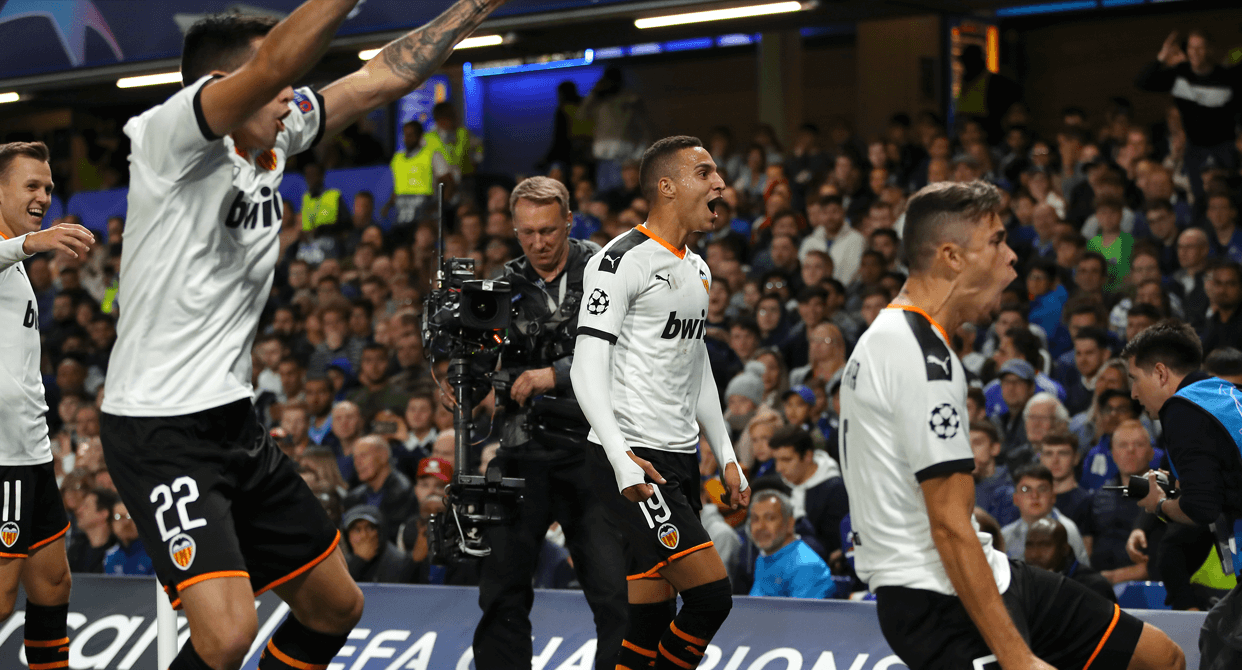 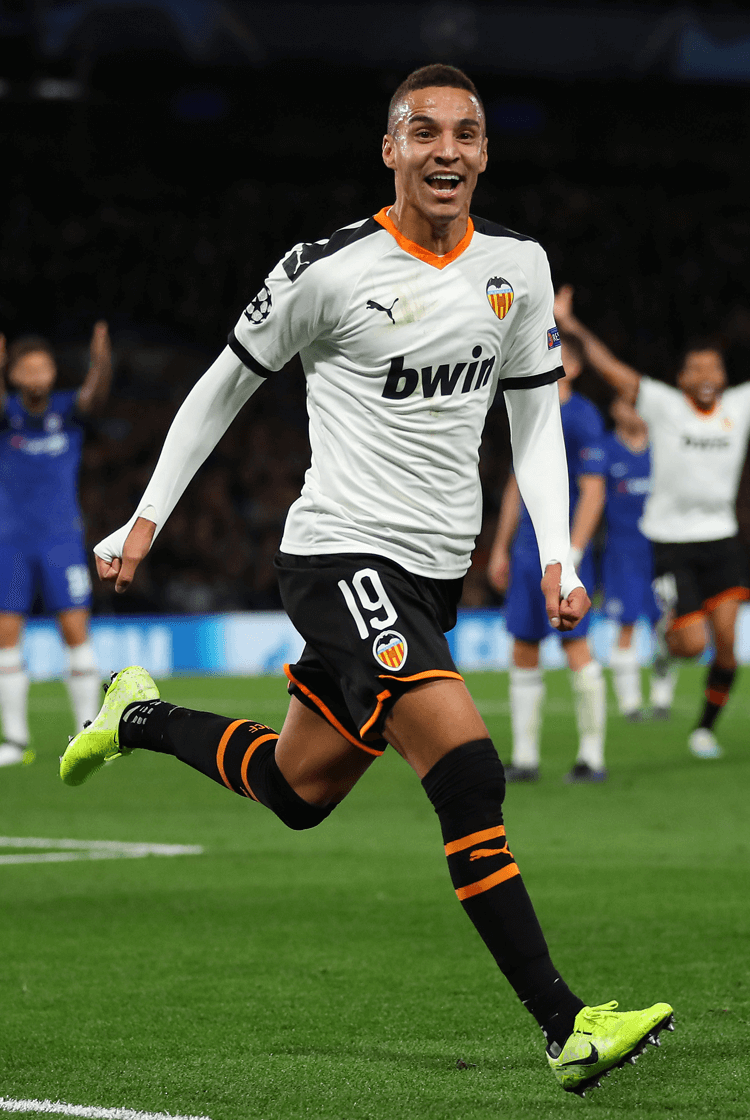 Chelsea made a losing start to their Champions League campaign when Ross Barkley missed a late penalty to hand Valencia victory at Stamford Bridge. Undermined by an injury suffered by Mason Mount during the first half, the hosts were presented with the chance to secure at least a point in the 86th minute, when the Video Assistant Referee judged Daniel Wass had blocked Fikayo Tomori’s header – but instead of Jorginho or Willian, it was Barkley who stepped up and then missed the target. Rodrigo had only 12 minutes earlier taken advantage of poor defending to give the visitors the lead. Defeat represented Chelsea’s first at home in the Champions League group stages since Basel won at Stamford Bridge in late 2013. 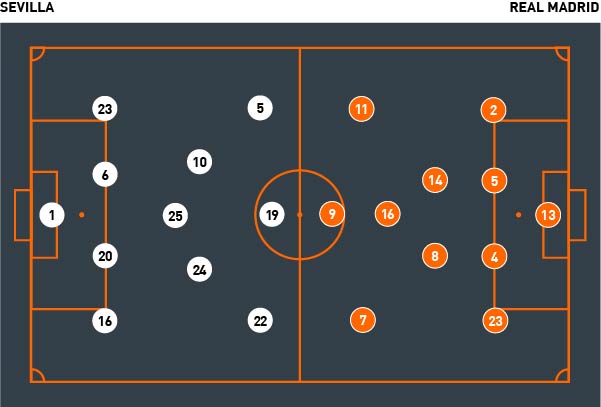 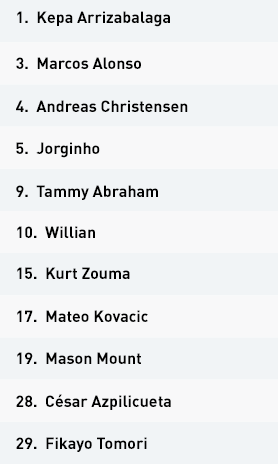 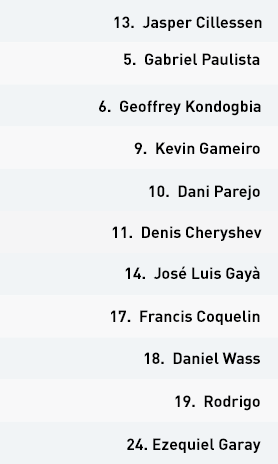 For Frank Lampard’s first Champions League fixture as a manager, he organised Chelsea into a 3-4-3 formation led by a front three of Willian, Tammy Abraham and, before he departed through injury, Mason Mount. When Chelsea looked to build up, they attempted to position Jorginho and Mateo Kovacic behind the front line of Valencia’s mid-block, to try to draw their central midfielders and create space behind.

The hosts sought access to space out wide, so positioned Mount – later replaced by Pedro – and Willian in half-spaces to unsettle Valencia’s wide midfielders. If those wide midfielders screened the ball from those in the half-spaces, Chelsea would play possession to wing-backs Marcos Alonso and César Azpilicueta; if they blocked passes out wide, it would be sent to Willian or Pedro. With Alonso or Azpilicueta in possession, the opposing full-back had to choose whether to engage, and risk an attacker in the half-space therefore making a penetrative run and potentially receiving from the wing-back, or to invite the wing-back to cross towards Abraham from a deeper position.

Chelsea often created these opportunities through circulating possession horizontally, moving Valencia’s midfield and creating the necessary gaps to play into. When the ball progressed up the pitch they kept Kovacic and Jorginho behind it with their three central defenders, and relied on their two wing-backs and front three to attack.


Valencia used a 4-4-2 shape out of possession, and a mid-block to attempt to restrict Chelsea’s access through central areas. Strikers Kevin Gameiro and Rodrigo applied moderate pressure when one of the hosts’ central defenders was in possession, while attempting to screen passes into the nearest central midfielder. If it travelled wide, Cheryshev or Coquelin would respectively engage Alonso and Azpilicueta to prevent play moving inside. When Chelsea progressed beyond midfield, defending full-backs José Gaya and Daniel Wass would be given responsibility for the wing-backs.

The visitors also used central midfielders Geoffrey Kondogbia and Dani Parejo to protect the middle of the pitch through maintaining a close distance and discouraging attempts to play through them. They were disciplined out of possession, and rarely tempted into areas that left them vulnerable.

In only his second match as the club’s manager, Albert Celades set Valencia up into a 4-2-4 formation when they were in possession. This often became a 2-4-4, with full-backs Daniel Wass and José Gaya pushing up into midfield – which encouraged Francis Coquelin and Denis Cheryshev to join Kevin Gameiro and Rodrigo in a front four. They had significantly less possession than Chelsea, recording only two shots on target as a result.

When building, the visitors attempted to play through central midfielders Geoffrey Kondogbia and Dani Parejo. If Wass and Gaya advanced out wide, Coquelin moved inside and Cheryshev moved with Gameiro and Rodrigo as those attackers looked to keep a close distance to each other to encourage the quick combination play they sought around the penalty area. There was often a relatively slow tempo to the initial phases of their build-ups, until they approached the final third.

Valencia also increasingly attempted to play with width – particularly on the right, where Coquelin moved inside and Wass advanced. Rodrigo joined him out wide, creating a two-on-one against the defensively suspect Marcos Alonso. The visitors also looked to set-piece routines and created better chances from them – including the game’s only goal in the second half.

Chelsea used a 5-4-1 shape when out of possession, which involved their two wide attackers withdrawing to join Jorginho and Mateo Kovacic in midfield, while wing-backs Alonso and César Azpilicueta dropped alongside the three central defenders.

They attempted to press high early on, and in the 5-4-1 mid-block phases looked to deny central penetration and encourage the ball out wide while waiting for a pressing trigger. Once a Chelsea player was considered close enough to possession, he would look to apply higher pressure, at which point teammates would join him and look to continue that press. Unfortunately for the hosts, they failed to do enough in possession and fell to a disappointing home defeat.