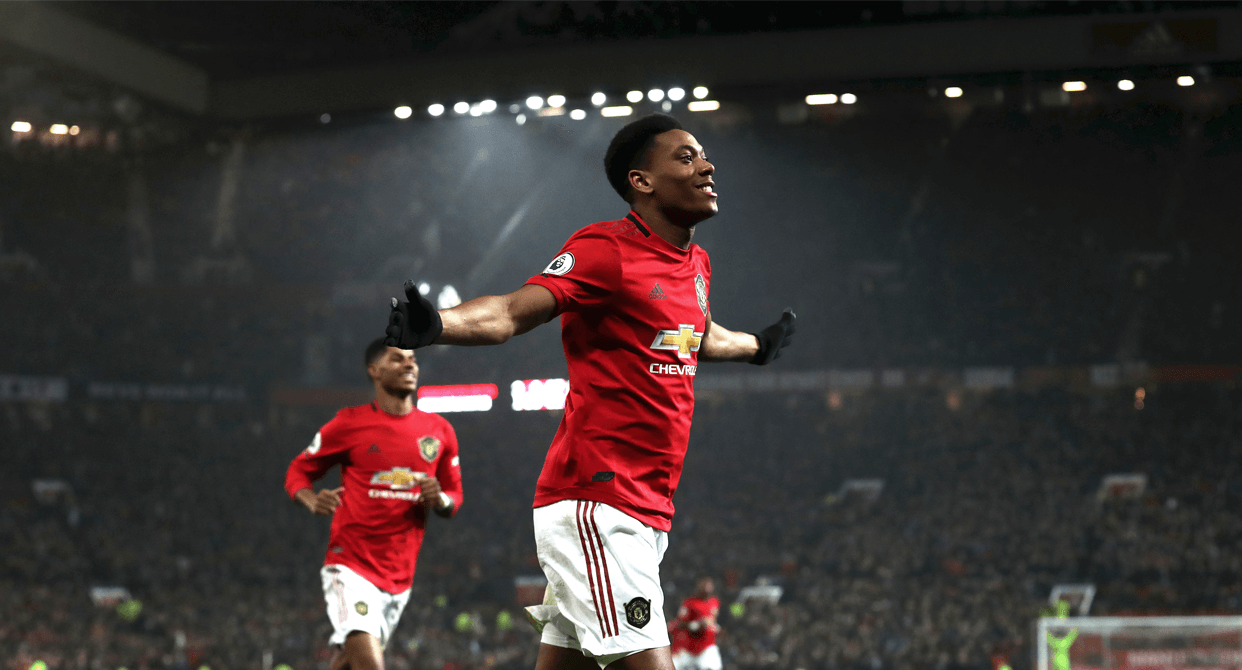 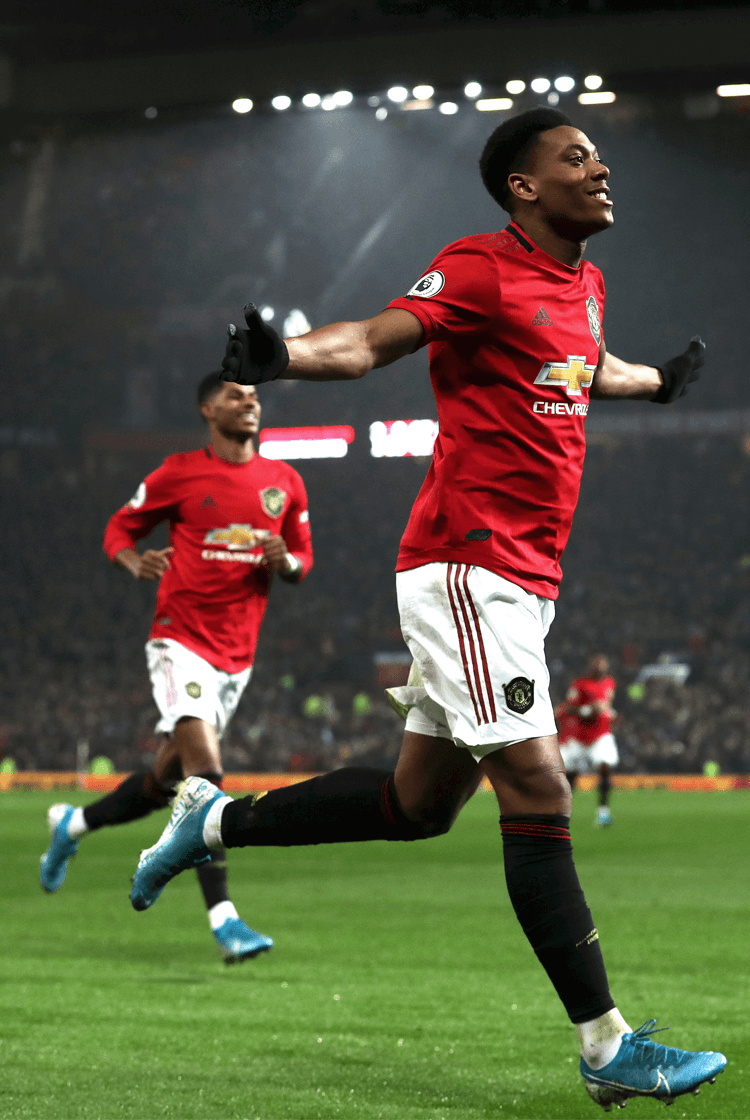 Manchester United recovered from a losing position to move to within four points of the top four when two goals from Anthony Martial and further finishes from Mason Greenwood and Marcus Rashford cancelled out Matty Longstaff's, for Newcastle. If elements of their performance and the result gave a youthful team cause for optimism ahead of 2020, they will regardless be aware of the need for greater consistency, and of the intense competition that will come from those rivals also pursuing qualification for the Champions League. "We're not going to see the best of Mason for a couple of years," said Ole Gunnar Solskjær of his exciting, young attacker. "He's learning, growing as a human being, he'll grow more and more. Marcus Rashford sprung on the scene the same age and you see more maturity in his game. You saw the intent straight away. Newcastle made mistakes but we made them make them by pressing and we made it hard for them." 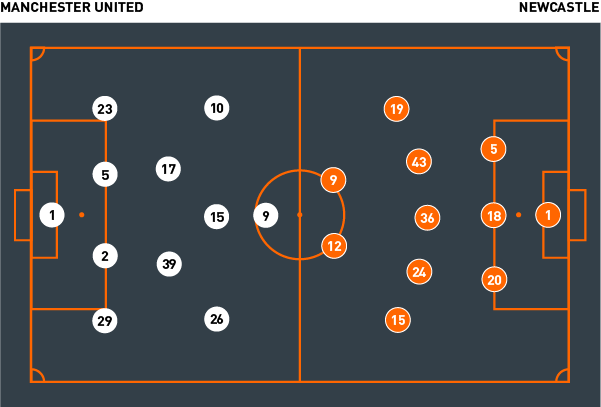 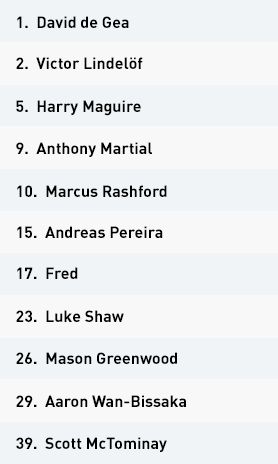 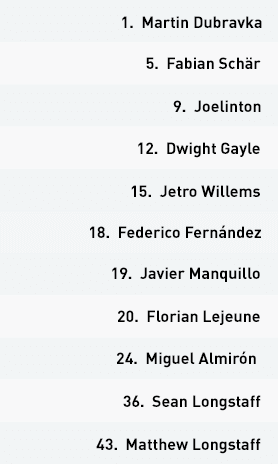 Manchester United again adopted Ole Gunnar Solskjær's favoured 4-2-3-1 formation, that on this occasion was led by the promising front three of Marcus Rashford, Mason Greenwood and Anthony Martial. Confronted by opponents who defended with a 5-3-2 and a deep and compact block, they largely dominated possession.

United circulated the ball, but the spaces they sought were regularly limited by Newcastle's attempts to press them, so they instead overloaded the left wing by advancing Luke Shaw and also using Rashford and Martial in both high and wide positions. When this contributed to a three-on-two overload in central midfield, their free number remained between the lines, to receive, turn, and advance, and United increasingly attempted to draw their visitors wide to create passing lines to that free number, and then attack.

Newcastle's unexpected opening goal led to them adopting even deeper positions – there were occasions when only Joelinton was not in their defensive third – and the distances between their units becoming even smaller as they sought to always keep players between the ball and goal. United played with intelligence and creativity when they were pursuing combinations in possession, ultimately to create spaces they could access through further combinations and blindside movements. Those off-the-ball movements, and their supporting angles, were enhanced by some one-touch football that was intended to access the few spaces that existed in the final third.


It was regardless poor defending by the visitors that led to United's second, third and fourth goals, after they had moved level. Paul Pogba replacing Scott McTominay gave Solskjær's team increased power and creativity within midfield, and Newcastle's midfielders struggled to cover the ground they needed to amid United circulating possession and accessing spaces between the lines.

Newcastle's additional number is more regularly in midfield; that at Old Trafford he was instead in the final third enhanced little when they were out of possession, particularly given their increased struggles to restrict spaces. Their manager Steve Bruce responded by removing Dwight Gayle, for Christian Atsu, and demanding that they defend with a 5-4-1. If that meant that they had greater width, United continued to operate from between the lines, and therefore to attack.

With Joelinton left as the visitors' only outlet, full-backs Aaron Wan-Bissaka and Luke Shaw were given greeter freedom to advance; Fred and Pogba also attacked and, between them, central defenders Harry Maguire and Victor Lindelöf were comfortable defending with the two-on-one they had against the Brazilian. Only greater ruthlessness in the final third prevented them from extending their lead even further.

Newcastle were organised into a 3-5-2 formation and, unusually under Steve Bruce, they started with two recognised strikers in Joelinton and Dwight Gayle. Their hosts defended with the same 4-2-3-1 they used to attack, but Newcastle's approach surrounded resisting pressure and using their front two as outlets, during transitions, to attack on the counter.

Joelinton was often their target, and he was complemented by Gayle and occasionally an advanced midfielder or wing-back running beyond him. If this led to the creation of goalscoring chances, early on, after they had taken the lead they offered too little in the final third. Joelinton and Gayle were too often isolated, owing to the deep territory in which Bruce demanded their defensive and midfield lines remained.

Through pressing from their 4-2-3-1, Manchester United also encouraged their opponents towards the touchline, from where they could limit their space and force them into mistakes. Andreas Pereira often advanced to join their leading attacker Anthony Martial so that, alongside either Marcus Rashford or Mason Greenwood, each of Newcastle's central defenders was pressed, and ultimately forced wide.

When the visitors attempted to build from defence, their wing-backs advanced to create potential four-on-fours, alongside Gayle and Joelinton, against United's defence, but the long, diagonal passes that were then played towards them were too often inaccurate. Newcastle's attacking potential was also limited by their struggle to retain possession during the second half, in which they too often cleared it and waited for their hosts' latest attack.