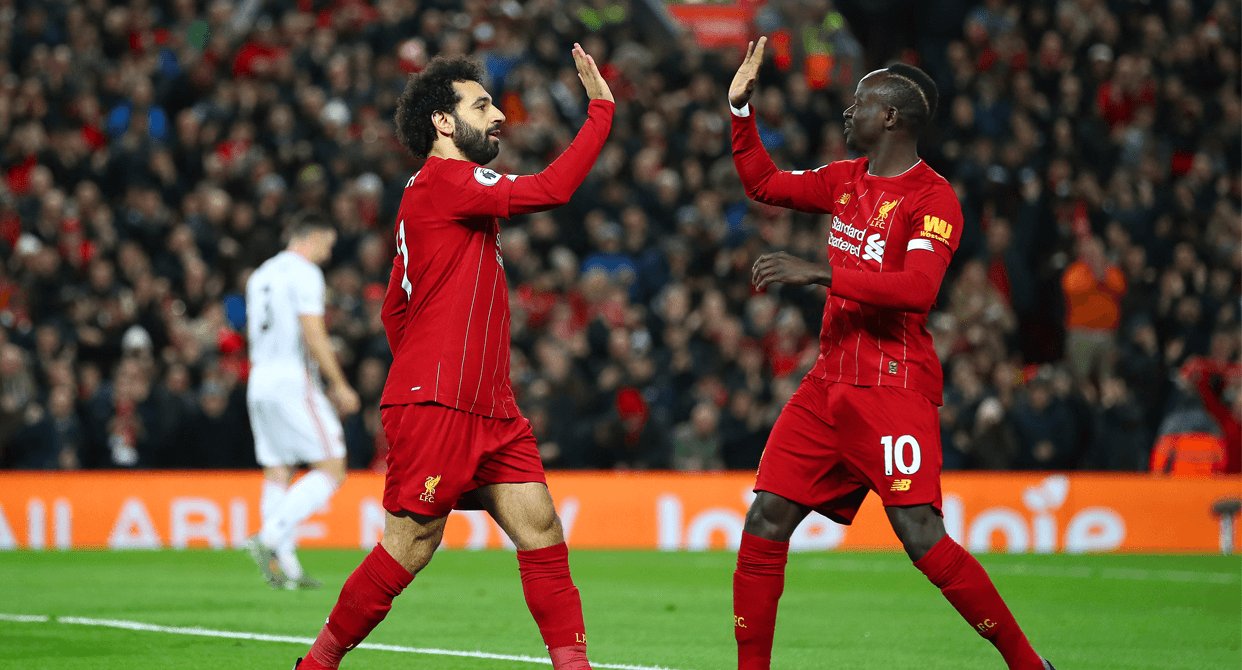 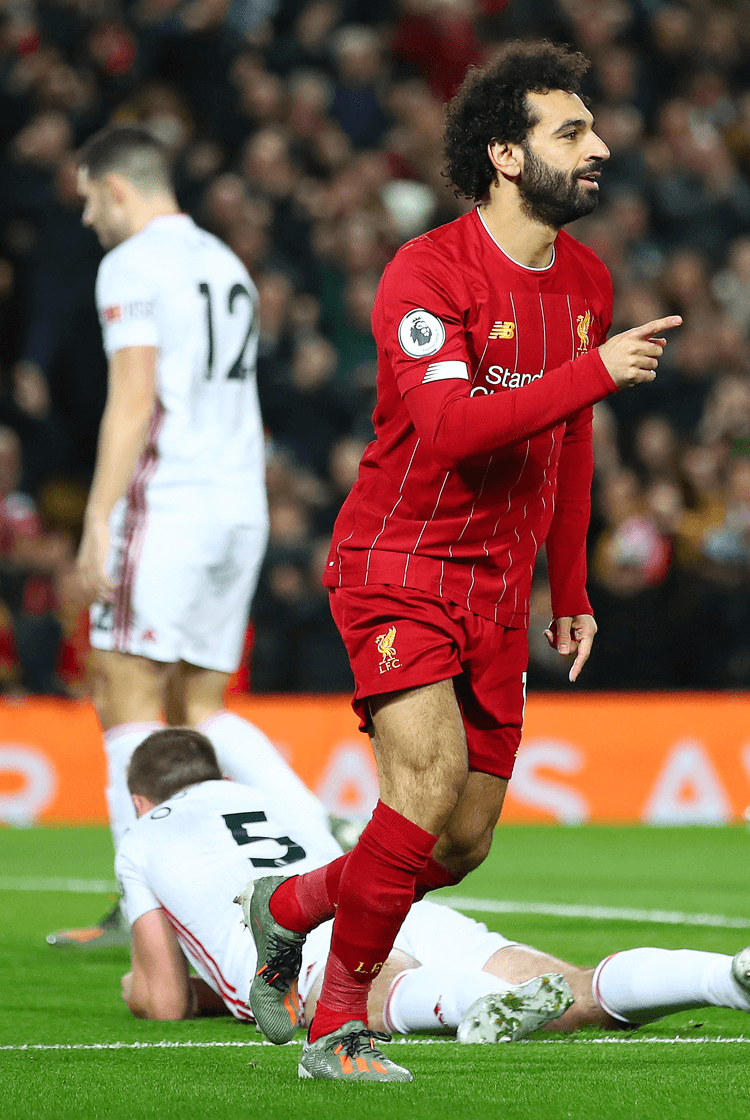 Liverpool remarkably passed a year without defeat in the Premier League when they recorded their latest three points, at home against Sheffield United. Mo Salah scored during the first half and Sadio Mané the second, maintaining their 13-point advantage from first place, and keeping them on course to dethrone defending champions Manchester City. From a possible 60 points, Jürgen Klopp's team have so far recorded a similarly impressive total of 58; at Anfield they have also won 18 in succession in the league, and have gone 51 league fixtures without defeat. "I am really happy and really proud of the boys," Klopp said. "We should not take things like this for granted. The way we controlled Sheffield United was exceptional. In possession we were incredible; we were calm but lively as well. The goals we scored were exceptional." 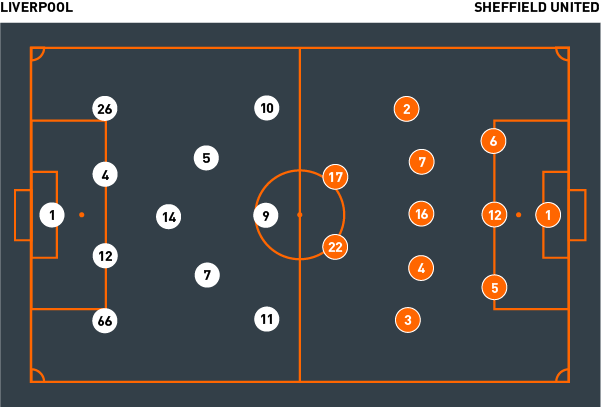 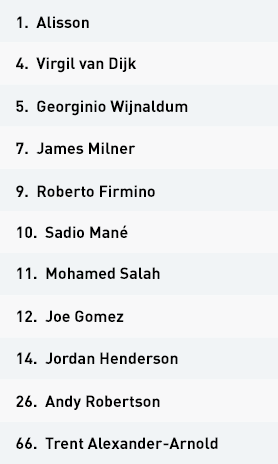 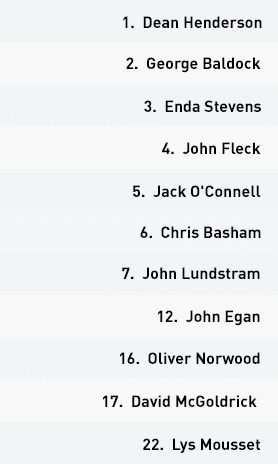 Jürgen Klopp organised Liverpool into their long-term 4-3-3 formation, which on this occasion featured Jordan Henderson deputising for Fabinho as their defensive midfielder. Hosting opponents who defended with a 5-3-2, they largely dominated, registering an impressive 74 per cent possession.

Sheffield United's organisation and compact defensive shape meant that Liverpool had to move the ball to create spaces, so they circulated it across their defence. The visitors were content for Joe Gomez and Virgil van Dijk to have possession; Lys Mousset and David McGoldrick had little desire to press them, and instead remained closer to their opposing midfield, continuing to shuffle across as the ball was moved to prevent it from being played forwards. It was only when either of the two central defenders attempted to carry it forwards that they responded by then pressing.

In response to Chris Wilder's team playing with two strikers, one of Liverpool's midfielders was increasingly used as a false full-back, increasing the width that that front two were then forced to cover and committing their wider midfielders towards possession, which they could therefore then play into the relevant full-back. Owing to the reluctance of George Baldock and Enda Stevens to leave their defensive line amid the risk of Sadio Mané or Mo Salah exploiting them doing so, the spaces they could pursue were to the sides of United's central midfield. By drawing that midfield to one side of the pitch and then switching possession, they stretched their visitors' defensive structure, and created openings from which they could cross.


Salah intelligently pursued those crosses, stepping away from the ball and the relevant defender to their blindside just before it was played, and then running across that defender to attack it, even if the visitors largely defended those crosses effectively. Their organisation also meant that they could go lengthy periods out of possession without Liverpool consistently threatening.

Robert Firmino had attempted to withdraw into deeper territory to be available for passes, but he was consistently followed by one of the visitors' central defenders when he did so, forcing him to travel further into midfield, where he was then followed by the aware Oliver Norwood. Mané recognised that Chris Basham followed if he attempted similar movements, so he exploited that by creating the spaces he would then run into, and Liverpool increasingly rotated positions in wider areas.

Salah, similarly, drifted inside while James Milner moved wider, and those operating as false full-backs created further uncertainty among United's defenders, who were debating whether to follow those many movements or to remain in their positions. When this invited them to make combinations, Liverpool also targeted the spaces between the opposing wing-backs and the wider central defenders with those rotations and also one-twos, in an attempt to then play low crosses. For all of their dominance and the threat they posed during transitions, the final ball too often lacked the detail required to capitalise on the occasions United had not recovered their positions, preventing them from winning by a wider scoreline.

Sheffield United were organised by Chris Wilder into their familiar 3-5-2 formation, against the 4-3-3 Liverpool remained in when they were out of possession. The visitors saw little of the ball, contributing to the fact that they only had three shots on goal.

They attempted to play long passes from the defensive third to either of their wing-backs or strikers, but the hosts' defence regularly won the first contact, and was supported by the midfielders in front of them then collecting the second ball. During their rare phases of improved possession they attempted to break lines with off-the-ball runs from deeper territory; short, diagonal passes were used to trigger blindside runs and overlaps, but they too rarely had possession to truly capitalise.

Liverpool's energetic press screened passes to United's wing-backs, so they instead clipped balls into the channels, but the impressive Joe Gomez and Virgil van Dijk excelled when defending those areas, meaning that the runs made by David McGoldrick and Lys Mousset came to little. The hosts also impressed during transitions when they were without the ball.

They regularly attempted to apply a counter-press, and did so until possession had been regained, or travelled to an area they lacked the personnel required for that press to continue effectively. If that counter-press was overcome, they would then make high-intensity recovery runs to frustrate their visitors.

Their work ethic during transitions and while defending was relentless, and demonstrated why they last conceded a Premier League goal in early December. That they are so effective at retaining possession for lengthy periods also denies opponents opportunities to attack.