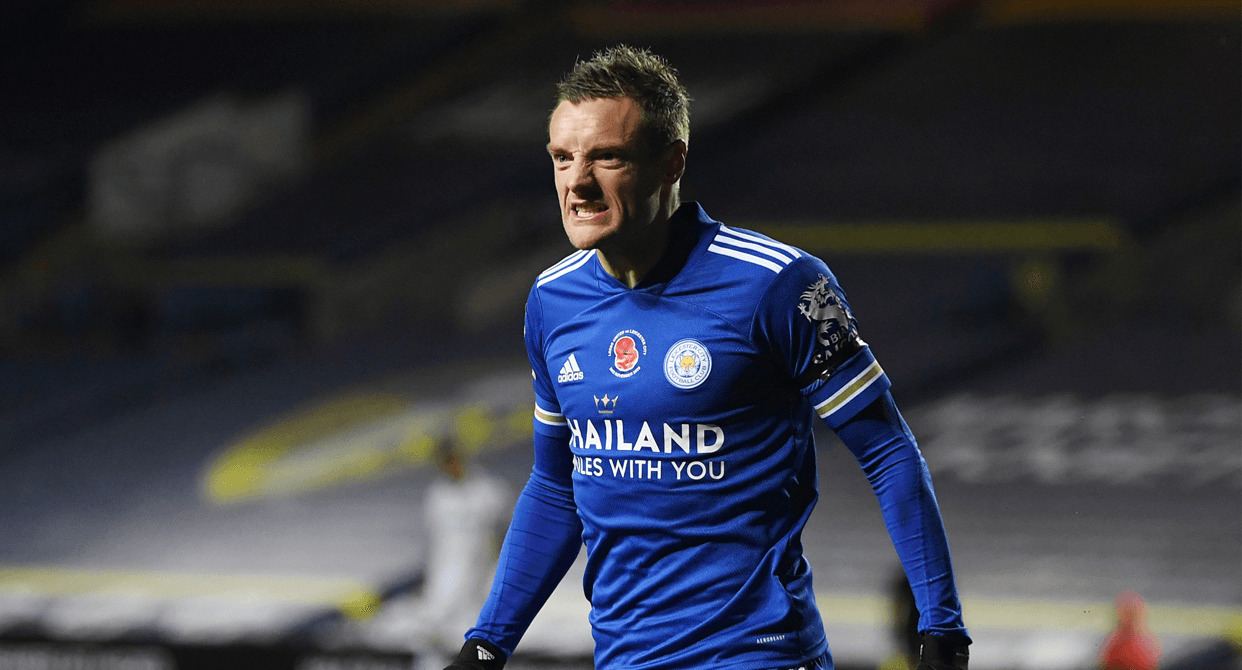 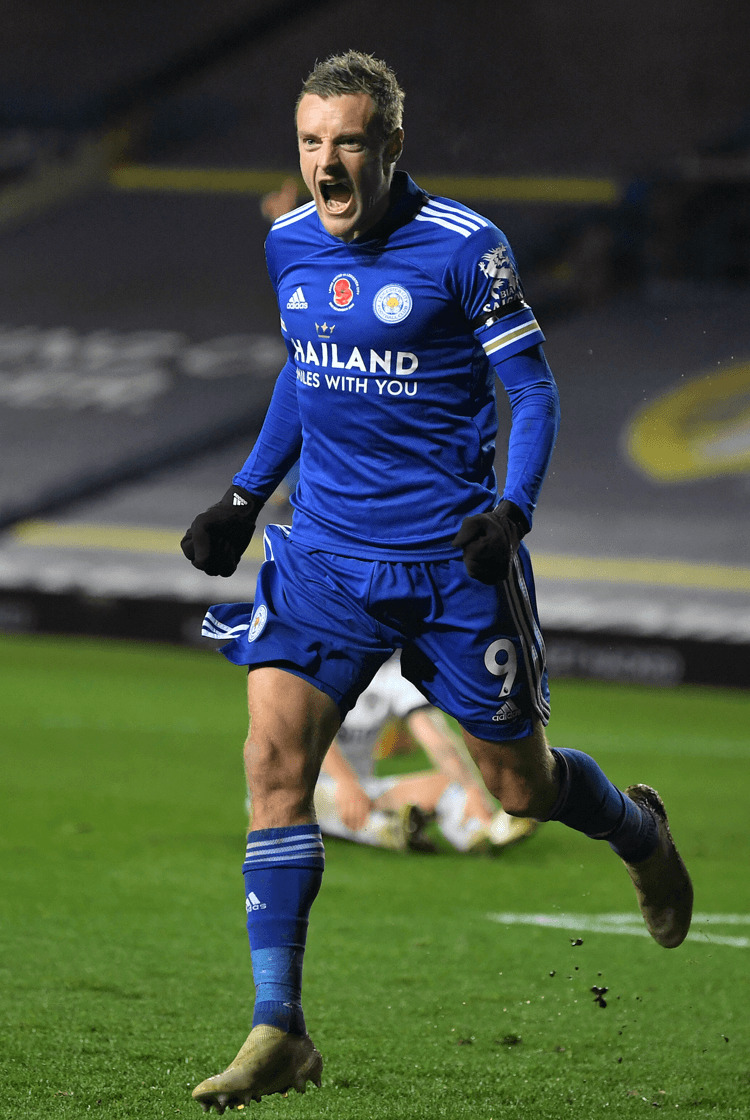 Leicester moved up to second and to within a point of Premier League leaders and defending champions Liverpool with a convincing victory at Leeds that demonstrated their potential to again challenge towards the top of the table. Harvey Barnes gave them the lead in only the third minute, and Youri Tielemans doubled that lead in the 21st. When Stuart Dallas scored three minutes into the second half for the hosts, they appeared capable of mounting a comeback, but Jamie Vardy restored Leicester's two-goal lead to essentially secure all three points, before Tielemans' stoppage-time penalty. "My players were brilliant," said Leicester manager Brendan Rodgers. "We had to be tactically disciplined and then play when we had the ball. If we get to March, April and we are in that position, then it will be nice, but there is a long way to go." His opposite number Marcelo Bielsa said: "In the first 30 minutes, we defended poorly and after that we didn't create enough danger. That is one of the main responsibilities of the manager. I am not taking the blame, just stating the players were not correctly distributed. The players are disappointed." 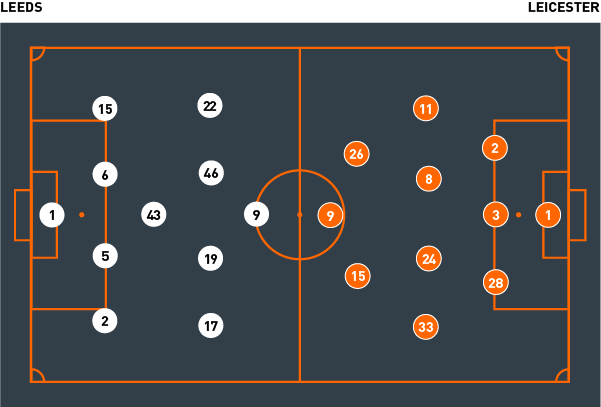 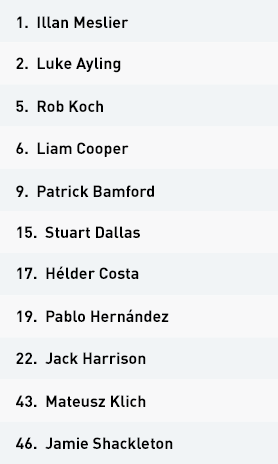 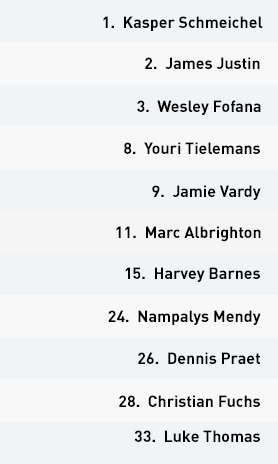 Leeds were organised by their manager Marcelo Bielsa into a 4-1-4-1 formation that featured Patrick Bamford as their lone striker and Mateusz Klich at the base of their midfield. They encountered opponents defending with a 5-4-1, via Marc Albrighton and George Thomas withdrawing from midfield and into defence.

They largely dominated possession, and used that possession to attempt to break down Leicester's organised and compact defensive block. Brendan Rodgers' team was content for Leeds' central defenders Robin Koch and Liam Cooper to retain the ball, and to instead limit the spaces in their defensive half.

Jamie Vardy led those defensive efforts by screening passes into Klich, and behind him his teammates moved in relation to the ball to restrict Leeds' efforts to play forward. Bielsa's team circulated possession between Koch and Cooper in their pursuit of spaces to do so; diagonal passes to their full-backs Luke Ayling and Stuart Dallas proved the trigger for Leicester to engage, so Leeds used that change in tempo to attempt to play through their opponents.

Their attacking players offered contrasting movements in an attempt to disorganise Leicester's defence; a wide attacker and central midfielder would do so, and Bamford would occasionally contribute by making the same run as the wide attacker. Though that rarely led to Leeds threatening on goal, it did bring the benefit of possession between the lines. They also sought to overload the wide areas via a full-back, wide attacker and one or both of their central attaking midfielders, and then to combine around the opponents they had drawn towards them before switching play through either an aerial ball into the penalty area or a switch that created a new point of attack.


It was in the wider areas of the pitch that Leeds demonstrated their greatest potential. Their full-back, wide attacker and closest attacking midfielder combined to create a triangle that featured blindside runs being made by their third man, often evading pressure, but they continued to struggle to create quality goalscoring chances, recording a xG of only 1.42.

Ian Poveda's introduction for the second half gave them more of a direct threat in one-on-ones – the young winger regularly sought to beat players – but if crosses were played into the area Leicester defended well against them. Bielsa's team also attempted to draw their opponents further forwards to create a free man in midfield, but they refused to move with them, forcing Leeds to instead rely on the less creative Cooper and Koch to carry possession, and on diagonal passes to their wide players.

Leicester's patience contributed significantly to their success. They waited for passes into anyone beyond central defenders Koch and Cooper before engaging, sought to trap those receiving vertical passes with their backs to goal, and trusted Harvey Barnes and Dennis Praet to read horizontal passes and win the ball. The rain was another factor in the game, as it undermined Leeds' attempts to move the ball successfully.

Brendan Rodgers set Leicester up into a 3-4-3 formation led by a front three of Harvey Barnes, Dennis Praet and Jamie Vardy. Their visitors, Leeds, essentially defended with a 4-4-2, but their priority was to apply a man-oriented press that involved them having an additional player in their defensive line at the expense of one in attack.

Leicester's possession was limited. They instead focused on pursuing transitional opportunities. In the early stages they tested Leeds with longer passes in behind, not least because the windy conditions made the ball's flight harder to predict; they otherwise sought to release runners and to counter at the moment they made regains. Barnes and Vardy represented their greatest transitional threats, and through using their potential they built a two-goal lead by half-time; Rodgers' team either play forwards immediately, or secured possession and then advanced it. Given Leeds often had only central defenders Liam Cooper and Robin Koch behind the ball, their other outfielders were often being forced to make intense recovery runs to negate Leicester's efforts.

Leeds striker Patrick Bamford was instructed to close down the closest central defender, and was assisted by the relevant wide attacker or attacking midfielder. Leicester, however, recognised that they had an overload in the first line of their build, so attempted to draw Bamford out of position before switching possession to their wide central defenders, who in turn advanced into the half-spaces.


When they did so Bamford withdrew into midfield to occupy the midfielders who had been left free, and where Youri Tielemans and Nampalys Mendy worked to provide security against counter-attacks and to draw Leeds' man-oriented structure into more central areas, to instead create spaces in wide territory. Leicester also proved adept a slowing the tempo of play when they had the ball.

They, similarly, demonstrated a sound understanding of when to accelerate it, to advance through Leeds' shape – the pass into substitute James Maddison and the next into Cengiz Under before their third goal provided a fine demonstration of them doing so. There was an intelligence and discipline to their approach, which ultimately contained a free-flowing and attack-minded team.