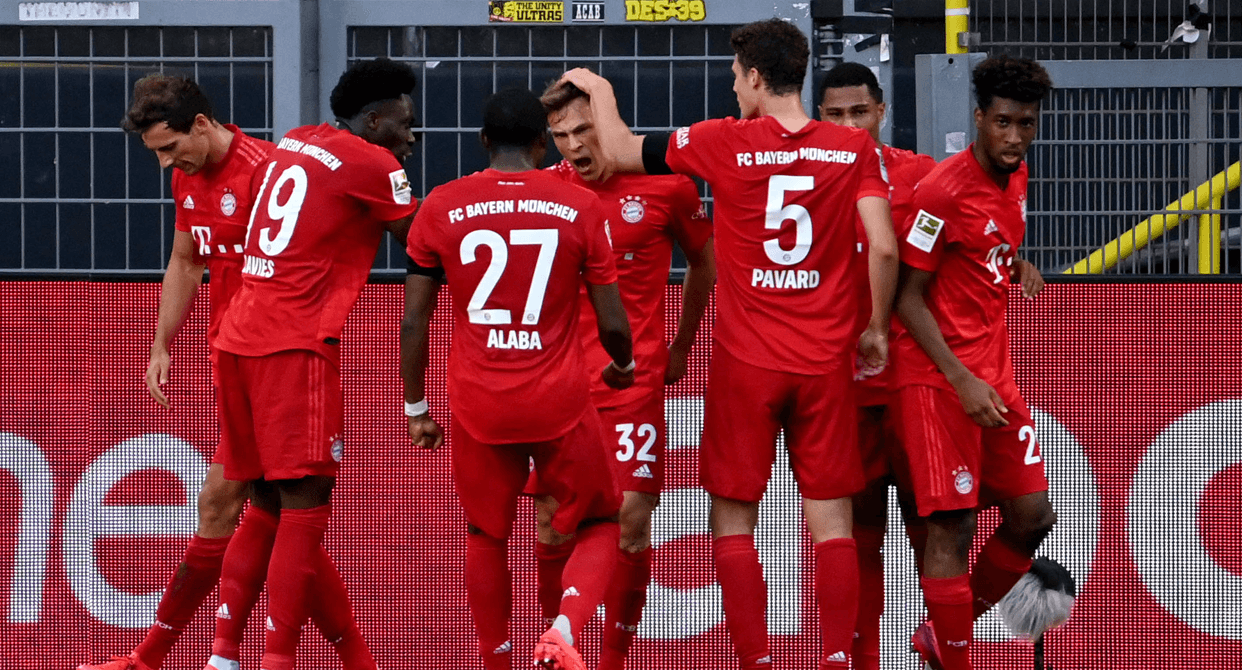 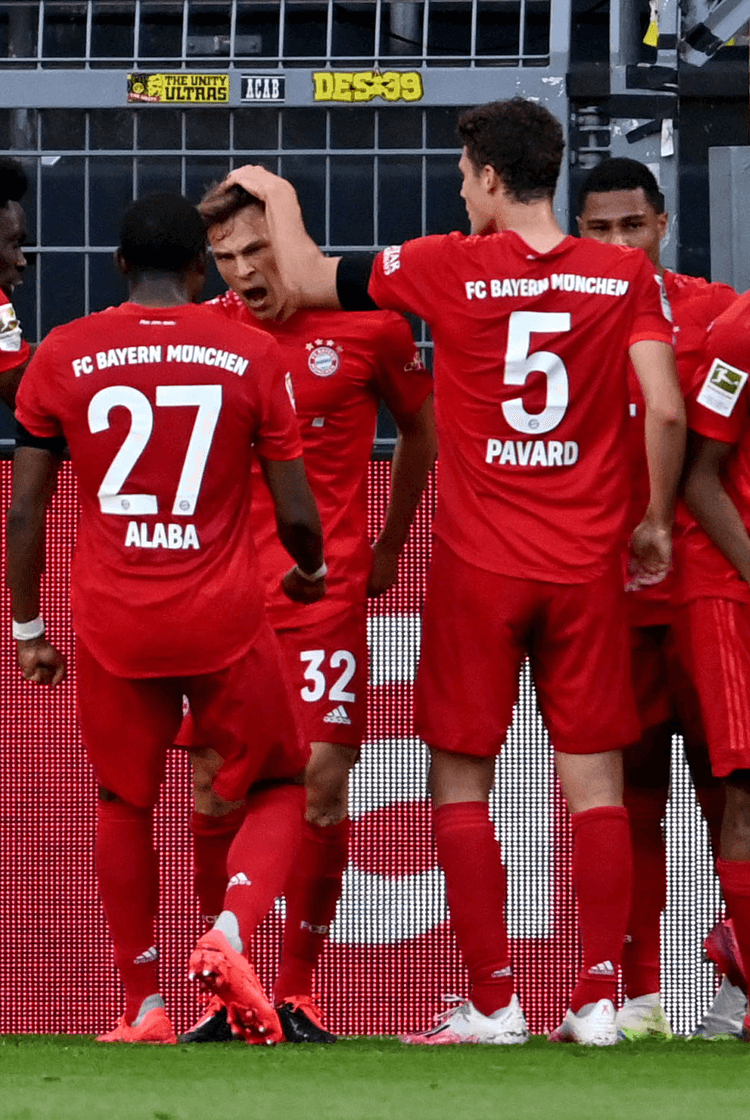 It will be "brutally difficult" for Borussia Dortmund to overcome Bayern Munich's seven-point lead at the top of the Bundesliga, their manager Lucien Favre conceded after watching his team suffer a costly home defeat to their rivals. A first-half finish from the influential Joshua Kimmich – a fine chip from 20 yards – put Bayern in front and, more significantly, eventually secured the victory that gives them a commanding lead from first place when they and their closest challengers have only six remaining league fixtures. Bayern's troubled start to the season had given Dortmund increased hope of winning the title, but since Hansi Flick's appointment Bayern have won 15 of their 18 league fixtures – only Pep Guardiola matched that from his first 18 at the club. "Seven points in six games – it will be very, very difficult," said Favre. "We wanted to win and take a big step forward – we did that," said Flick. "We were focused, decisive and courageous." 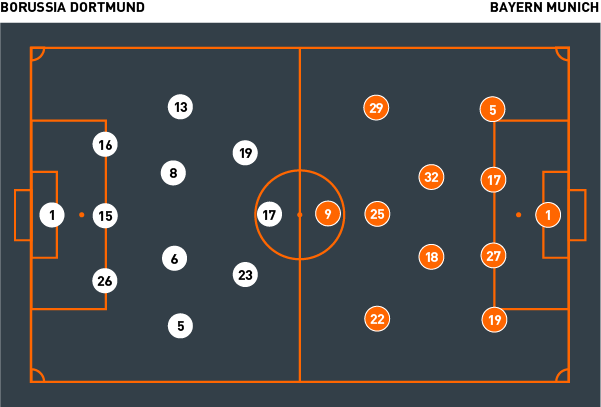 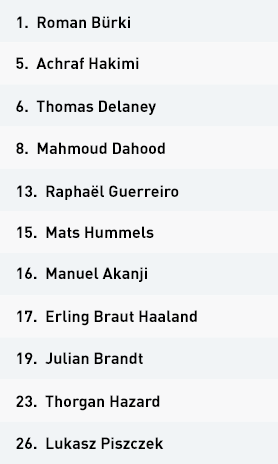 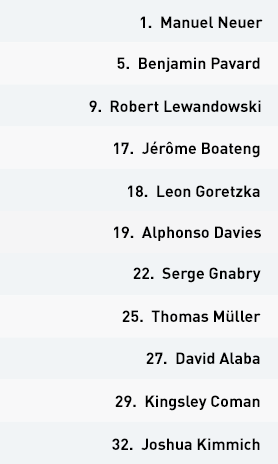 Lucien Favre set Borussia Dortmund up into a 3-4-3 formation, led by the front three of Thorgan Hazard, Erling Braut Haaland and Julian Brandt, when they had possession. Bayern Munich used a 4-4-2 while they were without possession, through Serge Gnabry and Kingsley Coman tucking in alongside Joshua Kimmich and Leon Goretzka to form a four in midfield.

Bayern pressed Dortmund in advanced territory, so Dortmund most regularly succeeded by playing over the top of that press and playing directly to Haaland, and through one-twos in the wide areas that involved their wing-backs advancing into the spaces that existed out wide. When Bayern pressed the left side of Dortmund’s structure, they were also attempting to force Dortmund into the wider areas where Bayern were sometimes successful in trapping them, and in isolating Haaland.

The visitors operated with a high defensive line in an attempt to condense the spaces in which Dortmund could operate; their quick central defenders and their alert goalkeeper Manuel Neuer were ready to defend the spaces that that created. Dortmund had little success towards the right, where Bayern left-back Alphonso Davies was too fast in his recovery runs, and David Alaba was also able to offer cover. Where Dortmund had previously used their wing-backs and penetrative runs from their wide attackers, they instead had to adapt, against Davies.

They attempted two solutions. Davies was being drawn too far across when the ball was on the far side of the pitch, so Dortmund attempted switches of play, but they either struggled to execute doing so at the necessary speed required to expose him or their final ball disappointed. A further approach involved one player moving to draw Alaba while another pulled Davies out wide, to create space inside; if that space was created, the speed and quality of their execution again meant that it was not exploited.


Emre Can and Jadon Sancho were brought on to replace Delaney and Brandt during the second half. Little changed tactically, however; Sancho played in different areas to those Brandt favoured during the first half, but he struggled to penetrate Bayern's defence.

As the second half progressed, Dortmund tweaked their build-up play and attempted to break the first two lines of Bayern’s structure with greater consistency. They created a diamond shape in the wide areas, with the intention of taking advantage of Bayern’s man-oriented defending, but if Dortmund made it through the first two lines of Bayern's defence they ultimately continually struggled to advance beyond the final defensive line.

In the game’s later stages, Bayern withdrew into a deeper position and became more compact as they sought to defend their narrow lead. Their defence was excellent at protecting the spaces that existed behind them, both when Dortmund had the ball in a central position, and when they advanced to where they could cross. Kimmich and Goretzka were influential in negating those crosses; Bayern’s compact structure also left Dortmund struggling to create meaningful chances and limited them to shots from distance, which rarely threatened Neuer.

Dortmund brought on Mario Götze and adopted a 4-2-4 to provide another number in the final third in their pursuit of an equalising goal. If he was involved in some neat combinations in the final third, Dortmund regardless continued to struggle to create, and fell to a defeat that may end their challenge for the Bundesliga title.

Bayern Munich were organised by their manager Hansi Flick into a 4-2-3-1 formation, built on the double pivot provided in midfield by Joshua Kimmich and Leon Goretzka, during the periods they had possession. They encountered hosts who defended with a 5-4-1, through Achraf Hakimi and Raphaël Guerreiro withdrawing into defence from midfield, and Julian Brandt and Thorgan Hazard adopting wide midfield roles.

They attempted to build possession from defence, and regularly succeeded in the early stages of doing so, owing to the two-on-one that existed between David Alaba and Jérôme Boateng against Erling Braut Haaland. The structure that existed behind Haaland demonstrated that Borussia Dortmund’s priority, while defending, was to deter Bayern from attempting to continue that build through central areas, so they invited their opponents to play out wide before moving to trap them there by increasing the numbers they offered in those areas.

Bayern regardless continued to favour those wide areas; a diagonal pass from central defence to a full-back, and therefore outside of Dortmund’s midfield line, often triggered their attacks. Those passes were regularly complemented by a diagonal, penetrative run between the relevant, opposing wing-back and central defender, intended to lead to either a penetration into the final third, or to draw an opponent out of position.


Further forwards, Robert Lewandowski and Thomas Müller, who rotated between operating as the visitors’ out-and-out striker and supporting attacker, also alternated between running in behind to stretch Dortmund’s defence, and withdrawing to towards possession. The different phases of Bayern’s attack eventually led to a pass inside to the attacker withdrawing into a deeper position, where he would receive possession while facing goal. Against an inferior team, Bayern could have expected to create multiple goalscoring opportunities, but the experienced Mats Hummels often frustrated them.

Kingsley Coman and Serge Gnabry drifted inside to invite the relevant full-backs to advance, and Gnabry also moved from the left wing to the right, to create a potential overload, and one which often led to them advancing through the hosts’ midfield. Gnabry also capitalised on the spaces that existed between Dortmund’s defence and midfield by receiving possession and turning and advancing in those areas. It was when attempting to progress beyond the final line of their opponents’ defensive structure – Lucien Favre’s defence knew when to hold their positions and when to step up – that they struggled. There were few quality goalscoring chances for both sides.