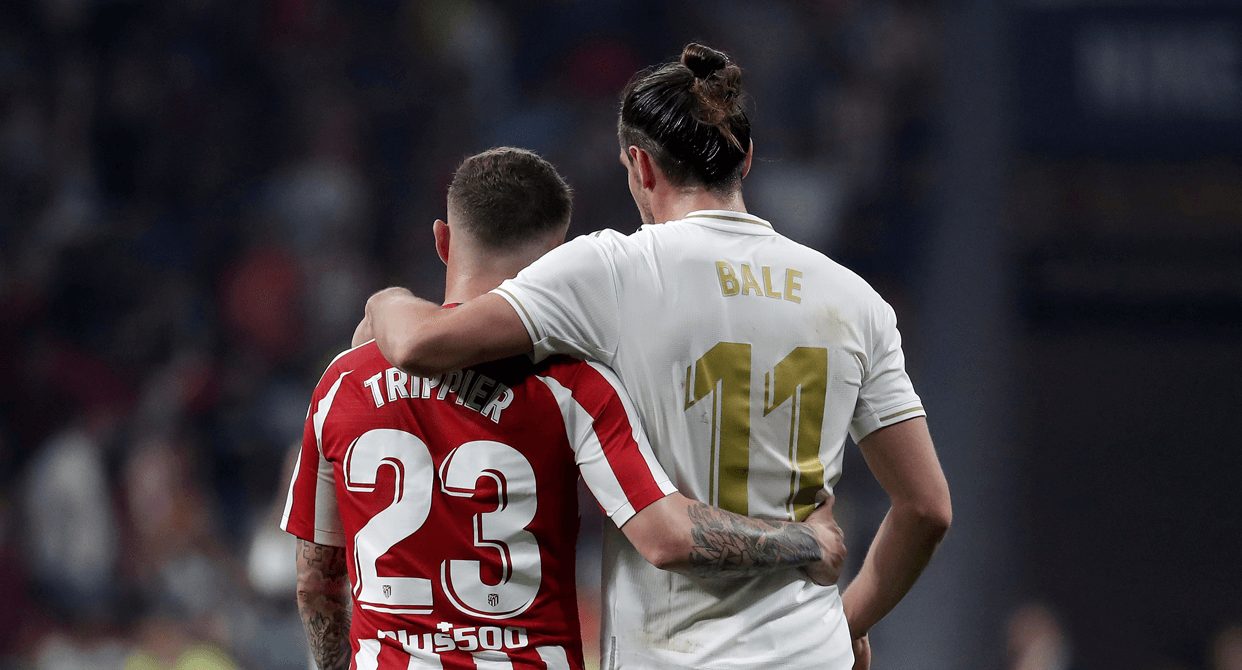 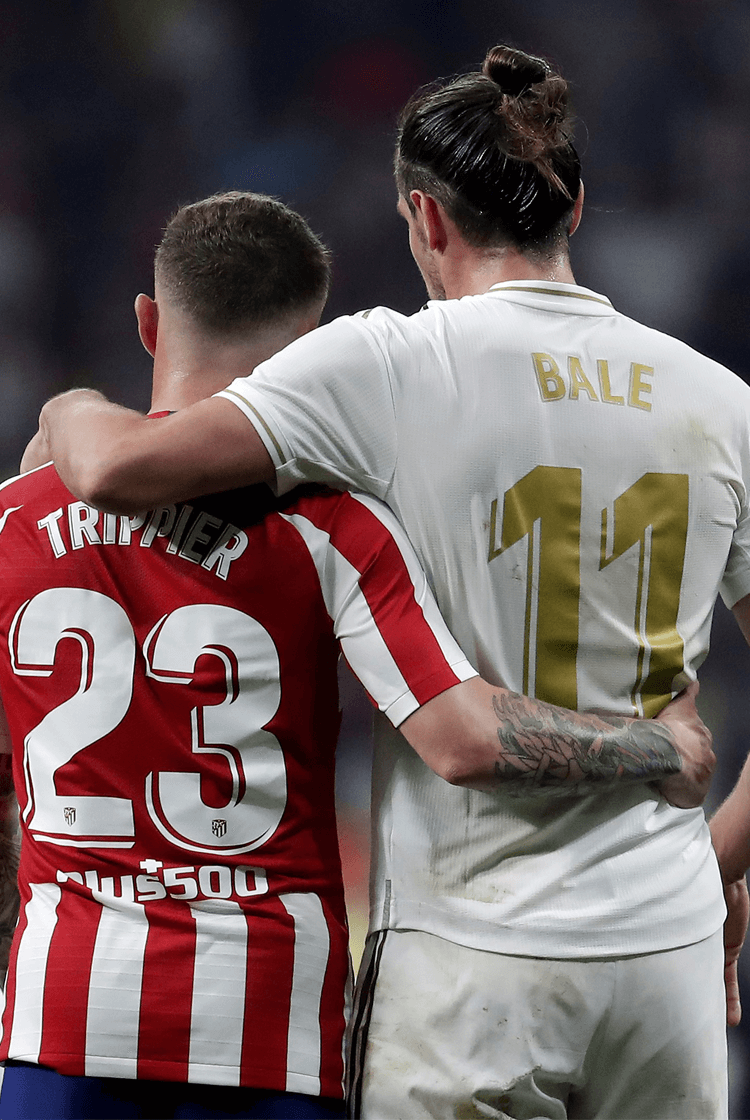 Real Madrid remain top of La Liga after the first Madrid derby of the season ended in a goalless draw. Zinedine Zidane’s future may remain the subject of speculation amid Xabi Alonso and Jose Mourinho being linked with his position, but it was the visitors to the Wanda Metropolitano Stadium who were perhaps the more deserving of victory. Diego Costa went close to giving Diego Simeone’s hosts the lead in the first half, but after the break Gareth Bale shot over when he should have scored, and Jan Oblak was forced into a fine save to deny Karim Benzema late on. “It’s significant to go unbeaten for three successive games,” Zidane later said. “I’m sure we’ll make things happen. We were up against opposition who were trying to stifle all our attacking options. We could have taken all three points.” 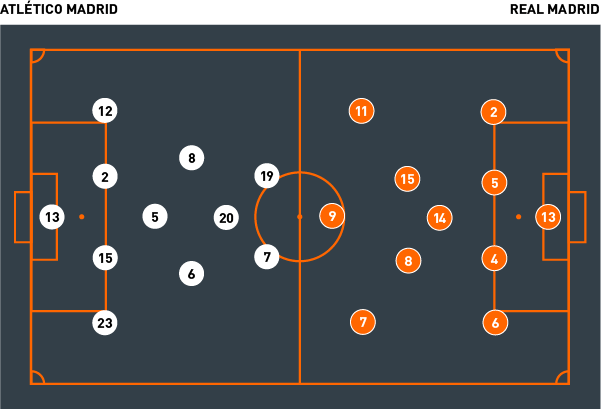 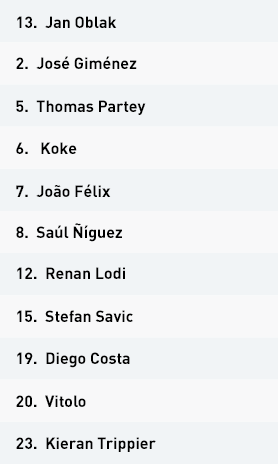 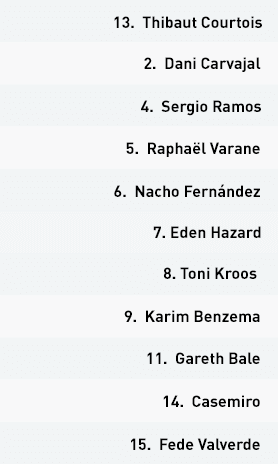 Atlético Madrid were set up by manager Diego Simeone into a four-diamond-two formation that featured Thomas Partey at the base of midfield, Vitolo at the peak, and Saúl Ñíguez and Koke between them. They intended to use fluid movements within midfield and attack to create passing lines through which they could penetrate, while full-backs Kieran Trippier and Renan Lodi provided width. Ultimately, however, they struggled to create much against their big-city rivals.

The hosts looked to play directly to the feet of Diego Costa and João Félix, who in turn attempted to set possession to a supporting midfielder, to encourage a potential penetration. They were consistently frustrated by Real Madrid’s compact defence when attempting the final ball, however. Félix and Vitolo rotated in an attempt to draw Casemiro out of his holding position behind the Real midfield, while Thomas played high-risk passes through midfield and drove at Real in a bid to draw attention and create spaces elsewhere around the front line. A surfeit of caution on both sides guaranteed that none of these tactics really yielded any great joy, however.

Real dropped into a 4-1-4-1 shape out of possession, and operated in a mid-block. Casemiro was the single pivot behind their four attacking midfielders, and Karim Benzema the lone striker in front of them. Without the ball they focused on limiting central penetrations and tempting Atléti into mistakes or long passes, rather than engaging in the pursuit of regains.

Wide attackers Gareth Bale and Eden Hazard pressed their opposite full-backs, but the visitors were content with their rivals’ fluid movement and instead looked to remain compact. Their defenders’ positions were particularly rigid, which frustrated Simeone’s team. Real’s priority was to consistently have numbers between the ball and goal; only when Casemiro was unable to follow Félix did any of their defensive line shift out of their shape, with Sergio Ramos stepping up in an attempt to prevent him receiving and turning.

It was when their midfield was penetrated and Atléti played wide to their full-backs that Real’s defending full-back would advance to engage, but even then they were reluctant to commit to making a challenge. They instead attempted to delay their opposite number, securing the necessary time for their teammates to recover their positions and hold their shape in what was an impressive defensive display.

Zinedine Zidane instructed Real Madrid to play in a 4-3-3 when they had possession, and for all of the caution involved in their approach he still started with the talented front three of Gareth Bale, Karim Benzema and Eden Hazard.

Despite their superior grasp of possession, they struggled to break down Atlético Madrid’s organised defensive block, in which the distances between defence and midfield were minimal, so they attempted to isolate individual midfielders to create possession in wide areas, often through positioning Toni Kroos in half-spaces before switching play to him.

Full-backs Nacho or Dani Carvajal could therefore advance beyond midfield to create a potential two-on-one with Bale or Hazard against a full-back, or Hazard would withdraw to exploit spaces that were created in central areas. Fede Valverde also withdrew to join the ball-carrier, to receive a short pass and then quickly return it, potentially creating spaces further forward. While this often took them beyond the hosts’ midfield, the Atlético defence proved more resilient, through consistently remaining compact.

Out of possession, Atléti’s four-diamond-two transformed into a flat 4-4-2, and they swapped between a high press and a compact mid-low block. When they pressed high they would encourage possession to reach one of Real’s central defenders, when Diego Costa and Félix would share responsibility for pressuring the defender in possession and monitoring Real goalkeeper Thibaut Courtois.

If using a lower block, the hosts kept a distance of 12-15 yards between their outfield units, therefore retaining three compact lines that were difficult to break down. Wide midfielders Koke and Saúl Ñíguez supported full-backs Kieran Tripper and Renan Lodi when Bale or Hazard were in possession; those spare in defence and midfield would then form a protective cage around the visiting attackers in an attempt to attack crosses from both in front and behind, and to ensure greater numbers to pursue second balls.