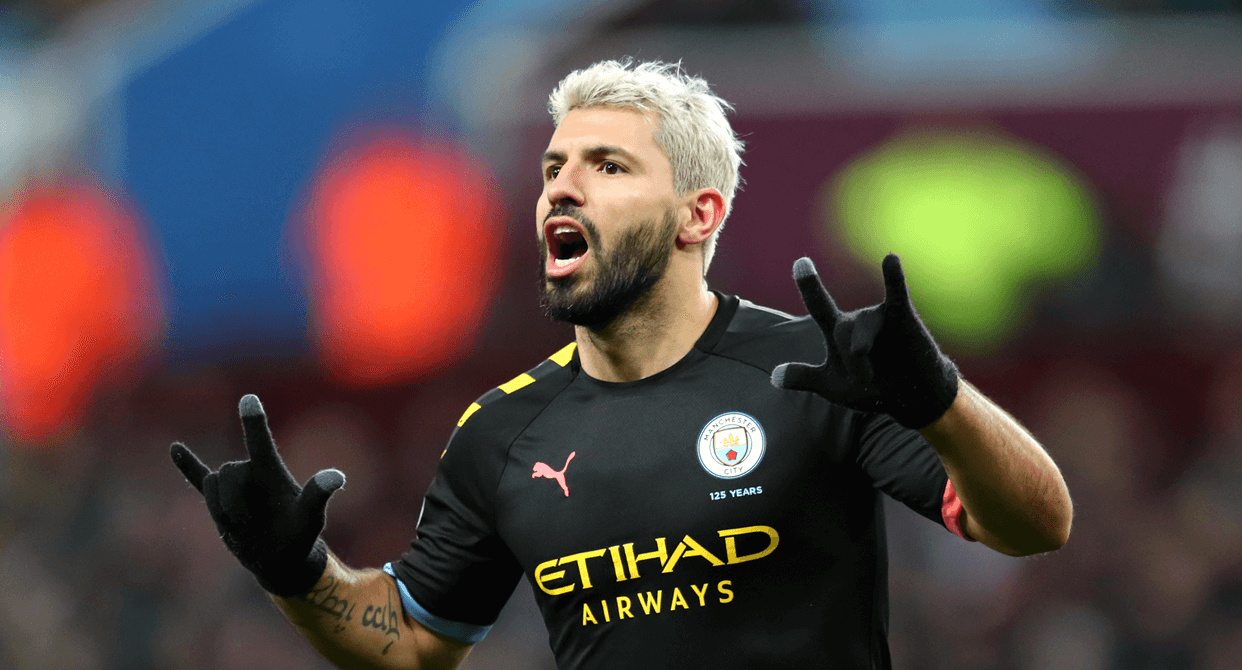 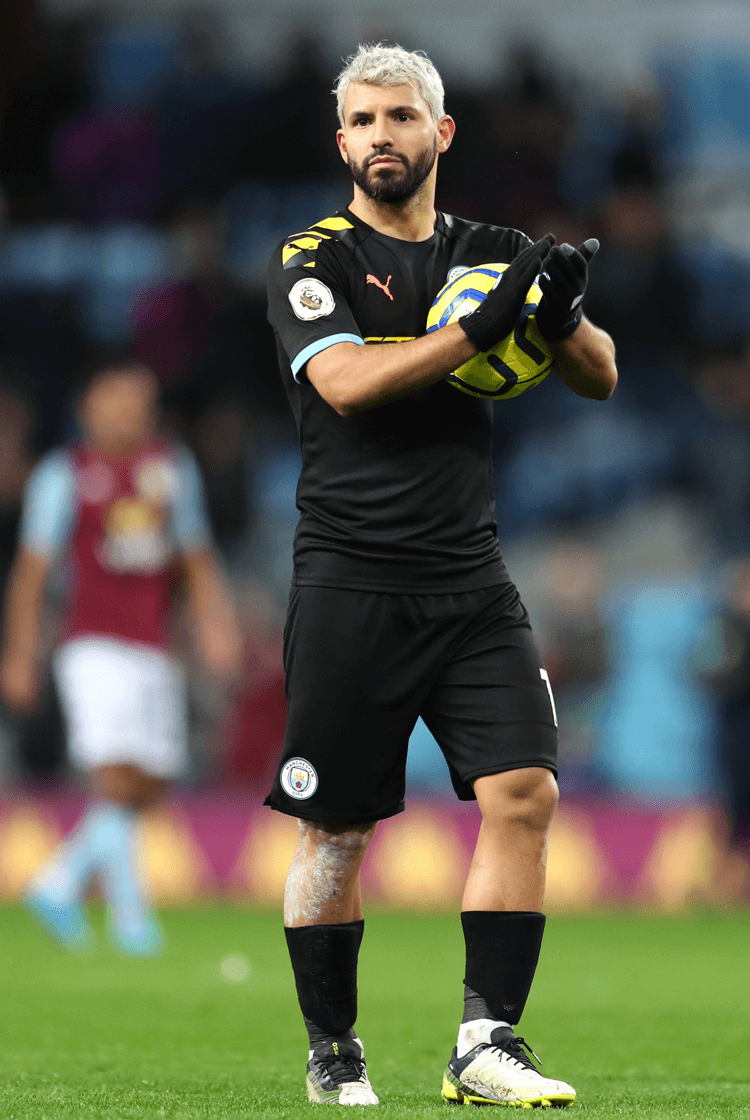 Manchester City returned to second in the Premier League when they eased past struggling Aston Villa. On the occasion of Pep Guardiola's 300th league win as a manager in one of Europe's leading divisions – in only his 390th league fixture – and Sergio Agüero surpassing Thierry Henry as the Premier League's leading overseas goalscorer, Villa finished the weekend in the relegation zone, and with pressure building on Dean Smith. Two finishes from Riyad Mahrez were complemented by Agüero's hat-trick and a further goal from Gabriel Jesus; Villa's only response came when Anwar El Ghazi scored from the penalty spot when they were already six goals down. "There's a professional pride as a coach and a team, and the third goal summed it up," said Smith, who remains without the injured Tom Heaton, Wesley and John McGinn. "They had about 20 passes without us laying a glove on them. We have to ask why weren't we competitive and why we gave them too much respect." 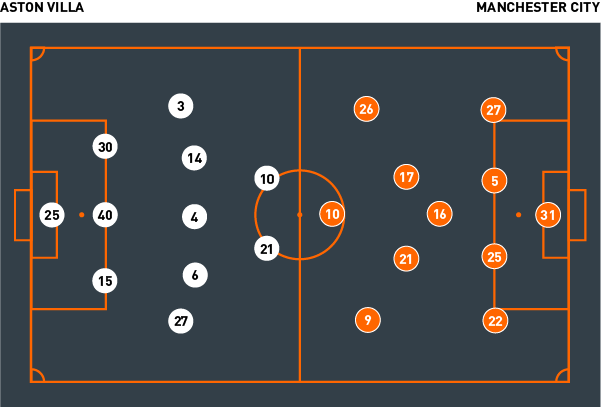 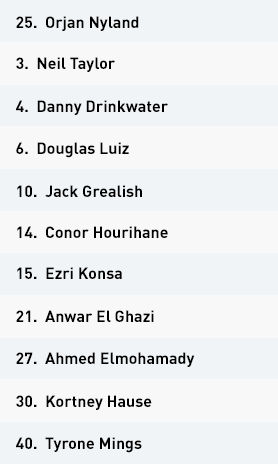 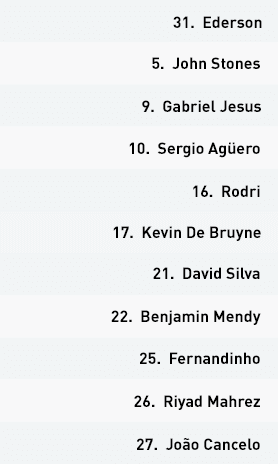 Dean Smith organised Aston Villa into a 3-5-2 formation for the periods in which they had possession, against a team defending with a 4-1-4-1. Those periods of possession were ulitimately rare, as was any attacking threat – demonstrated by the fact that they registered only one shot on goal.

Villa prioritised circulating the ball between their three central defenders in an attempt to look for opportunities to move it forwards, but Manchester City largely applied an aggressive press, led by their three-strong attack. Riyad Mahrez and Gabriel Jesus closed down the two wider central defenders and screened potential passes to the relevant wing-backs to force Villa into central areas, where they could then defend three-on-three within midfield.


The hosts struggled to bypass the first line of City's press, and regularly conceded possession in the defensive half. On the occasions they played forwards they mostly did so vertically and with speed, but an over-reliance on Jack Grealish meant that they remained predictable; City surrounded the forward and, if necessary, fouled him. That inability to retain the ball, and a significant lack of movement and support from within midfield was essentially why they were 4-0 down at half-time.

Danny Drinkwater particularly struggled. He contributed to the concession of all four first-half goals; he first made it too easy for Mahrez to beat him; he conceded possession in the penalty area; he naively pressed Kevin De Bruyne, and then later freed up De Bruyne when he instead pressed John Stones. A lack of match fitness unquestionably contributed, but as influential was his poor decision making, and the quality of opponent he was encountering.

Manchester City adopted Pep Guardiola's favoured 4-3-3 formation when they were attacking. Rodri operated as the single pivot at the base of midfield, against opponents who defended in a 5-3-2.

They largely controlled possession, but were confronted by Aston Villa's deep block. They first advanced beyond midfield, before then struggling to penetrate through Villa's five-strong defence. Guardiola prefers his team to adopt a symmetrical shape while on the ball, but David Silva began to operate closer to Sergio Agüero, contributing to the many combinations between them that took them beyond Villa's defence.

Gabriel Jesus operated as an inside forward from the left, inviting Benjamin Mendy to advance from left-back, from where he mostly had the freedom of the left wing. Riyad Mahrez largely stayed wide on the right; João Cancelo supported him from a deeper role than the one Mendy was being asked to fulfil, and from there Mahrez excelled at moving into space and on to his favoured left foot, instead of wasting those spaces as he can when his starting point is more central.

Vertical rotations were used to draw Villa's defenders, and therefore to create spaces; both Agüero and Jesus withdrew towards possession as Silva and Kevin De Bruyne offered penetrative runs in the opposite direction. Those movements made the hosts' midfield particularly compact, creating half-spaces in central areas and further spaces out wide to encourage two-on-ones, or Mahrez to attack one-on-one.

The regularity of those rotations meant that Villa had to repeatedly reorganise themselves, to both pass opponents on and to track them. When De Bruyne, Silva and eventually substitute Phil Foden began to adopt positions wide of Villa's central defenders while Mahrez and Jesus remained wide, the hosts' wing-backs and central defenders also became uncertain about their positioning, because of the risk of being stretched.

Balls towards Mahrez or Mendy would trigger penetrative runs from one of City's attacking midfielders, with the intention of them then receiving possession and playing low crosses into the penalty area. If those deliveries had been of a superior quality, Villa would have struggled to block so many.

It was during the second half that City adopted a 5-4-1 when they were without possession, giving them greater cover across midfield and support for their wing-backs. This ultimately also sacrificed their ability to pose a counter-attacking threat, albeit by a point when even a point was beyond their reach.