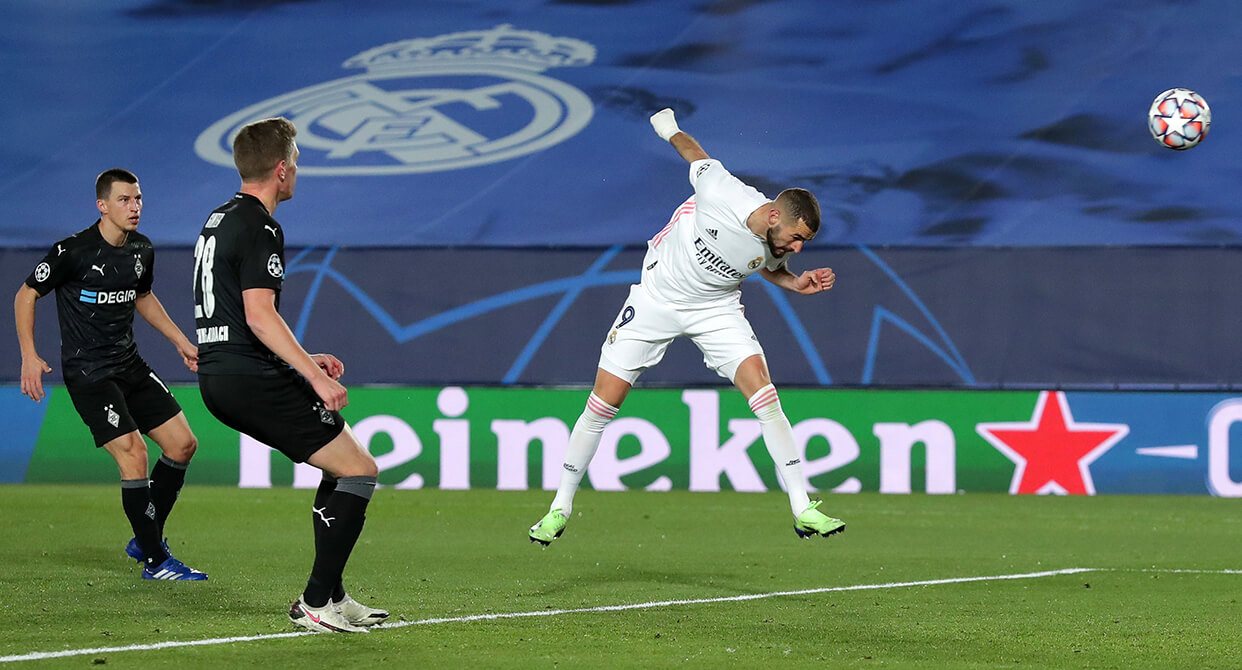 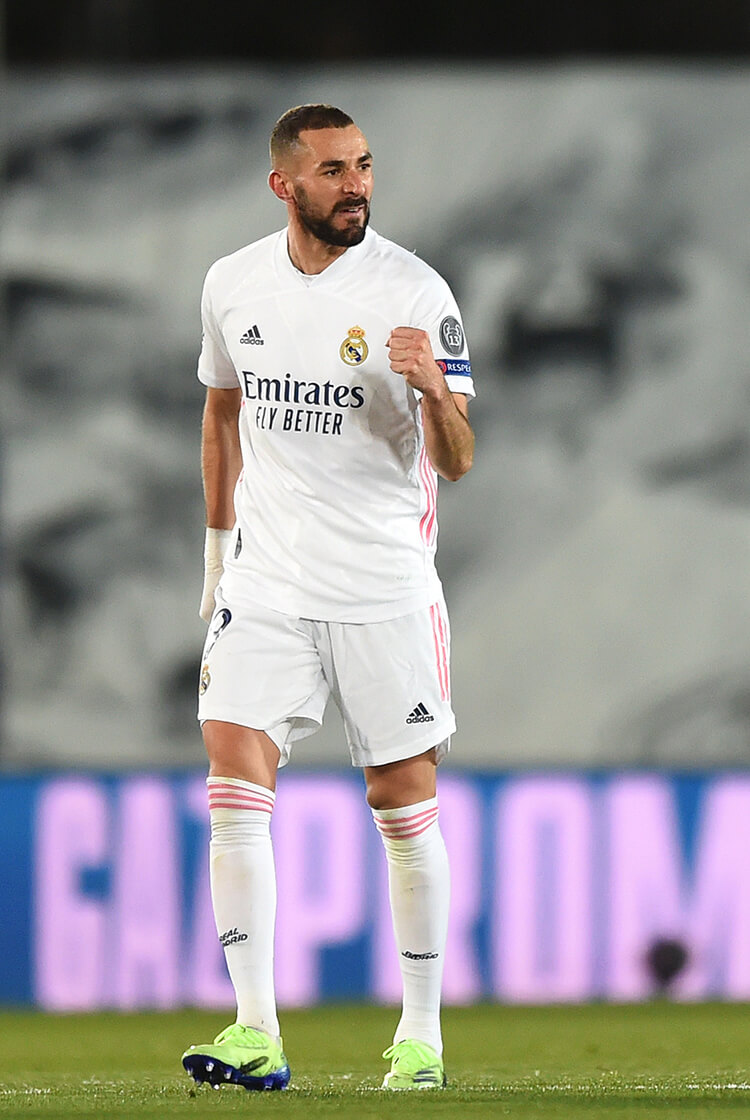 Real Madrid and Borussia Mönchengladbach progressed to the knockout stages of the Champions League, at the expense of Inter Milan and Shakhtar Donetsk, after a valuable victory for Real. Two first-half goals from the consistent Karim Benzema delivered the three points they needed; an on evening when Luka Modric also had a finish ruled out, they then largely negated their opponents' attempts to attack. "We flew out the blocks from minute one," said Real's manager Zinedine Zidane. "Our first half was spectacular and the second was fantastic too. I'm thrilled for the players again because they suffer with all the things that get said on the outside." His opposite number, Marco Rose, said: "We gave Real Madrid too much time and space. Madrid played a different game than the first leg, Modric was a very important factor against us. We ran back a lot and we couldn't get much of the ball." 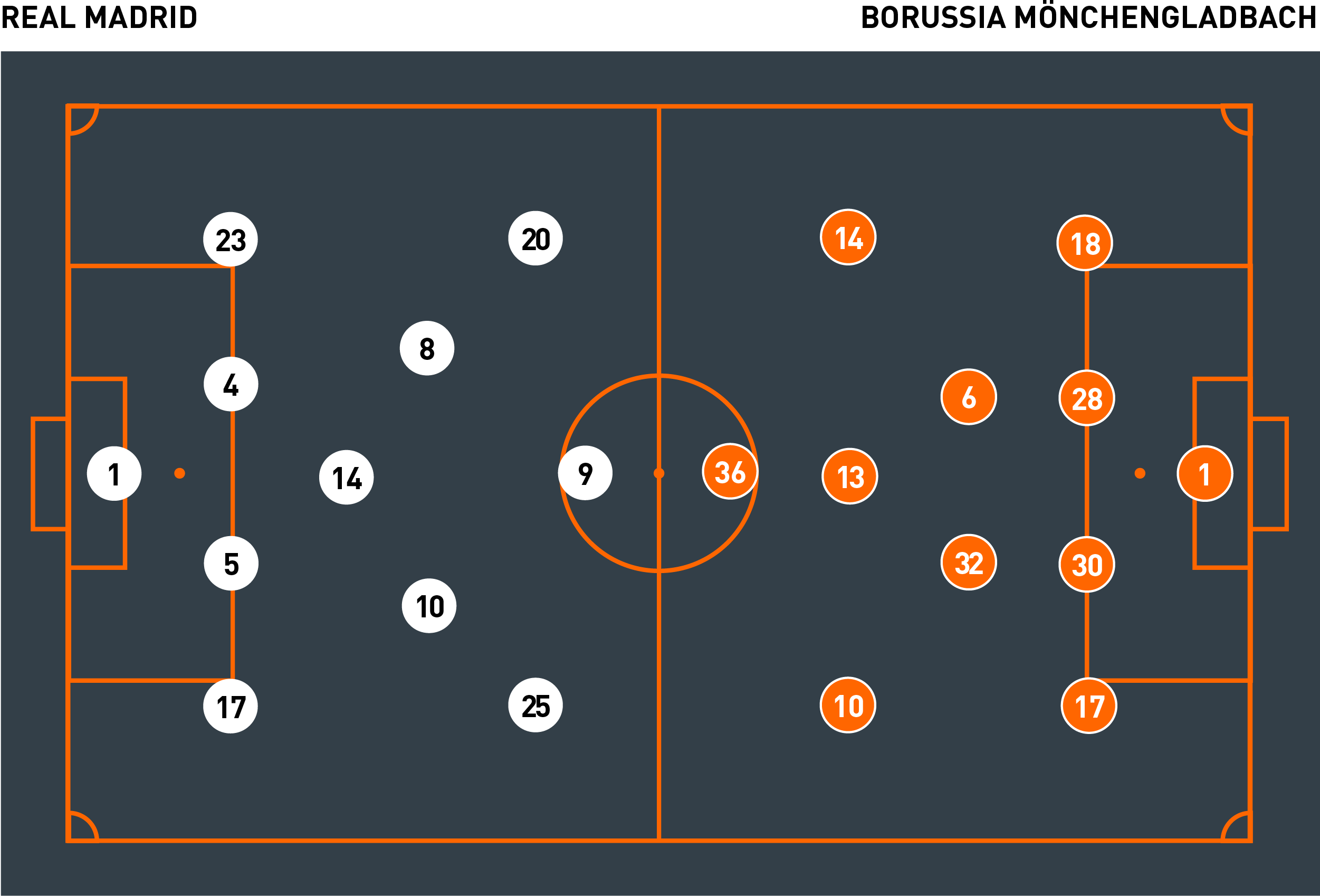 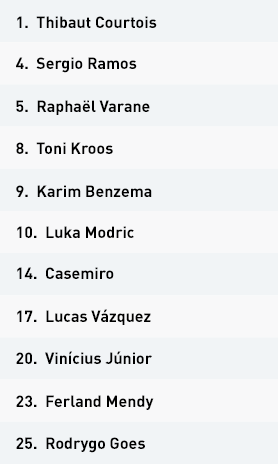 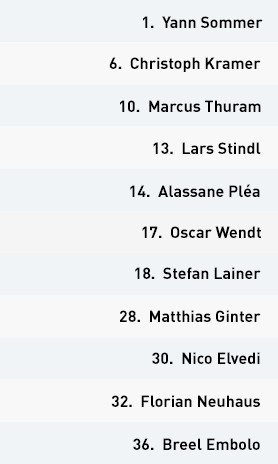 Real Madrid were organised by their manager Zinedine Zidane into a 4-3-3 formation led by the front three of Vinícius Júnior, Rodrygo, and Karim Benzema. Their opponents, Borussia Mönchengladbach, defended with a 4-4-2.

Real were confident in attempting to play through that 4-4-2; their midfielders, via Casemiro withdrawing into central defence and Luka Modric or Toni Kroos adopting positions as a false full-back, assisted in creating an overload that took them beyond their visitors' front two and that invited their full-backs to advance. Gladbach's flat structure meant that there existed space between the lines that Real could target, and they regularly succeeded in accessing them.

Zidane's team also worked to draw individuals away from the midfield block they were encountering, increasing those spaces between the lines and feeding those capable of continuing their attempts to penetrate forwards. Towards the right Lucas Vázquez remained wide and Rodrygo alternated between the wide areas and the half-spaces; towards the left Vinícius remained wide and Ferland Mendy advanced to adopt an attacking midfield position. Mendy therefore regularly received between the lines, and in turn sought to thread passes into the forward runs of Karim Benzema, or for Vinícius, who attacked Stefan Lainer one-on-one.


Gladbach too often covered too far when possession travelled wide in both their defensive and midfield thirds, so Real capitalised by switching play via a diagonal pass to the relevant advancing full-back. Targeting those wider areas ultimately delivered – both of their goals came from crosses from the right-wing, and Benzema pulling away from Matthias Ginter.

At 2-0 up Real resisted increasing the tempo with which they were playing, aware that Marco Rose's team were unlikely to score, and that they were already on course to secure the victory they required the reach the knockout stages of the Champions League. Further chances were created for Modric and Sergio Ramos – both came from wide deliveries – but were not taken, and combinations in the final third, complemented by short, quick passes and blindside runs, ensured that they continued to threaten.

Borussia Mönchengladbach's manager Marco Rose set his team up into a 4-2-3-1 formation led by Breel Embolo. Their hosts, Real Madrid, defended with a 4-1-4-1 that featured Casemiro between defence and midfield.

Gladbach sought to build from the back, but encountered an intense press. Real's wide attackers, with the support of Karim Benzema, pressed their central defenders, and Sergio Ramos and Raphaël Varane adopted aggressive positions in an attempt to encourage mistakes. Florian Neuhaus moved from defensive midfield to a false full-back's role to contribute to the first line of their build-up and to provide an additional number there; in turn, Marcus Thuram or Embolo withdrew into the space he vacated, and Oscar Wendt advanced from left-back.

Embolo roamed throughout the first half to receive to feet, and Alassane Pléa made diagonal runs into the spaces behind those Embolo vacated. If Embolo's movements would normally have meant an additional figure in midfield, the willingness of Ramos and Varane to move with him to prevent him from receiving, turning and advancing largely negated that.


Rose's team struggled, throughout the first half, to find a way to progress beyond Real's press. One attempt involved using blindside movements from a third runner, via moving possession inside to draw their opponents there and that run then being made on the blindside of a defender in a wide position. But if that took them beyond the first two lines of Real's shape, they continued to struggle to test Real's back four – it was instead during moments of transition that they posed their greatest threat.

During the second half they instead attacked with a 4-3-3 that featured one defensive midifelder instead of two, and therefore increased the numbers with which they attacked. There existed the potential for combinations, and for their full-backs to advance; Lars Stindl also operated similarly to as a false nine, contributing to the creation of a diamond shape in midfield and therefore a four-on-three against Real's midfield three.

When he did so Thuram and Pléa made their attacking runs. Regardless, for all that the visitors had an increased grasp of possession and continued to progress beyond Real's attack and midfield, they continued to struggle to provide a goalscoring threat.