Profile
There are few sights in football that evoke nostalgia quite like some of football’s most recognisable names reappearing on teamsheets across Europe. Justin Kluivert, Federico Chiesa, Enzo Zidane, Timothy Weah, Giovanni Simeone, Ianis Hagi, Devante Cole and Daniel Maldini are all following in their fathers’ footsteps, and Marcus Thuram – son of 142-cap France international Lilian – is showing signs that he could be one of the best of the next generation.

Thuram junior attracts extra attention – and with it, expectation – thanks to his family name, but his position as one of Borussia Mönchengladbach’s most important players has nothing to do with his father. He is playing a key role in his side’s challenge for Champions League qualification, and manager Marco Rose is well aware of both the 22-year-old’s strengths and his potential. “Marcus is a footballer who benefits greatly from his physique and stature,” Rose said. “Nevertheless, he’s also a fine technician who can always deal with situations in tight spaces. I believe that Marcus is far from the end of his development. There’s a lot more to come from him.”

Tactical analysis
Thuram is both a goalscorer and a creator rolled into one – he is Gladbach’s joint-top scorer in 2019/20 and ranks in the top 10 in the entire Bundesliga for assists. He makes the majority of his appearances on the left side of the attacking midfield three in Rose’s 4-2-3-1 formation, but he is by no means a traditional winger. He provides a threat in behind and spends significant periods in central areas, almost like a second striker. Despite often starting on the left wing, Thuram will quite regularly be Gladbach’s furthest player forward, spending more time close to goal than the centre-forward – usually fellow top scorer Alassane Pléa.

He does not seek possession, instead waiting for his opportunity to strike, and he only really seems interested in what happens close to goal – but that is part of what makes him so dangerous. He often goes through long periods without touching the ball, but still poses a regular threat on goal. In a recent 3-1 defeat to Bayer Leverkusen, Thuram had only 30 touches of the ball in his 77 minutes on the pitch but still scored. In Gladbach’s most recent match – the 4-1 win over Union Berlin – Thuram had the second-fewest touches of all Gladbach players who played at least 80 minutes. He still played a crucial role, however, scoring twice.

It’s not uncommon for an attacker to be less involved in play than others – take Leicester striker Jamie Vardy, for example, who will frequently have fewer than 30 touches in a game but remains one of the Premier League’s most potent marksmen – but it is a little unusual that Thuram plays such an insignificant role in build-up play given he regularly plays, nominally at least, as a midfielder. When he is involved, there is pressure on him to make his contributions count.

Thuram’s movement is one of his greatest strengths, with bursts of pace and explosive moments often too quick for his opponents. He holds his position well and does not always get drawn towards play, instead taking up a position that makes it difficult for defenders to see both him and the ball. Then, when a chance presents itself, Thuram springs into action and sprints in behind (below). 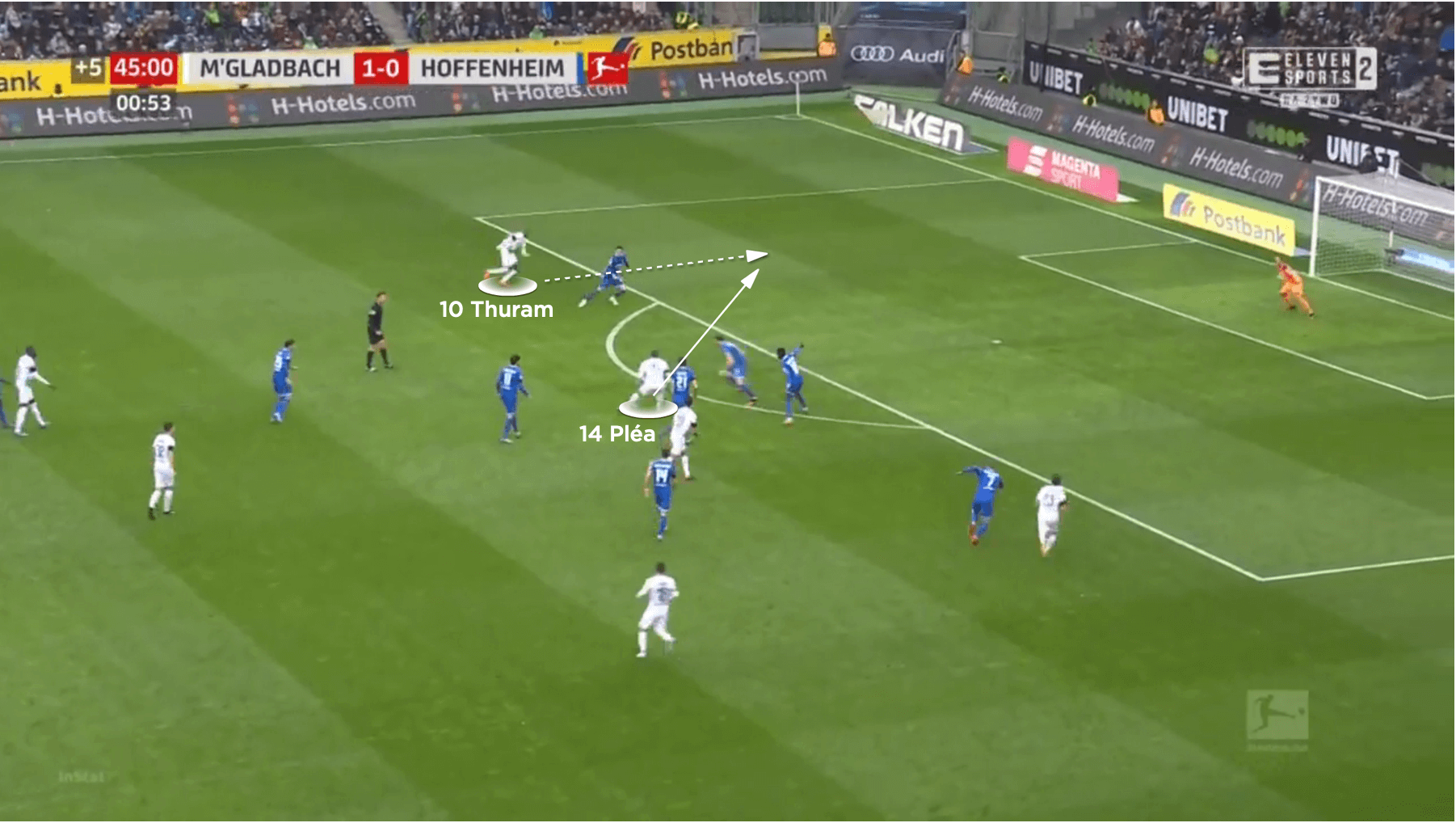 He is extremely effective at throwing defenders off through what have become trademark flicks with which he disguises a pass into an onrushing teammate’s path. To do this, Thuram slows right down as he makes a run across the front of an opponent, drawing that player out of position as they stay tight to him, hoping to prevent the young Frenchman from turning. In the knowledge that he has created space in the position he and the defender have vacated, Thuram is adept at swiftly flicking the ball into that gap with a cleverly disguised and extremely quick movement.

He then continues his run in the opposite direction and draws defenders further out of position with what is essentially a dummy run. Doing this can create space in tight central areas (below), but can also make larger gaps on the left after Thuram as drifted off the flank, inviting Gladbach’s attacking left-back Ramy Bensebaini to overlap. Bensebaini has five goals and two assists in just 12 Bundesliga starts in 2019/20. Rose is evidently keen to get him forward at every opportunity, and Thuram plays a key role in ensuring that happens. 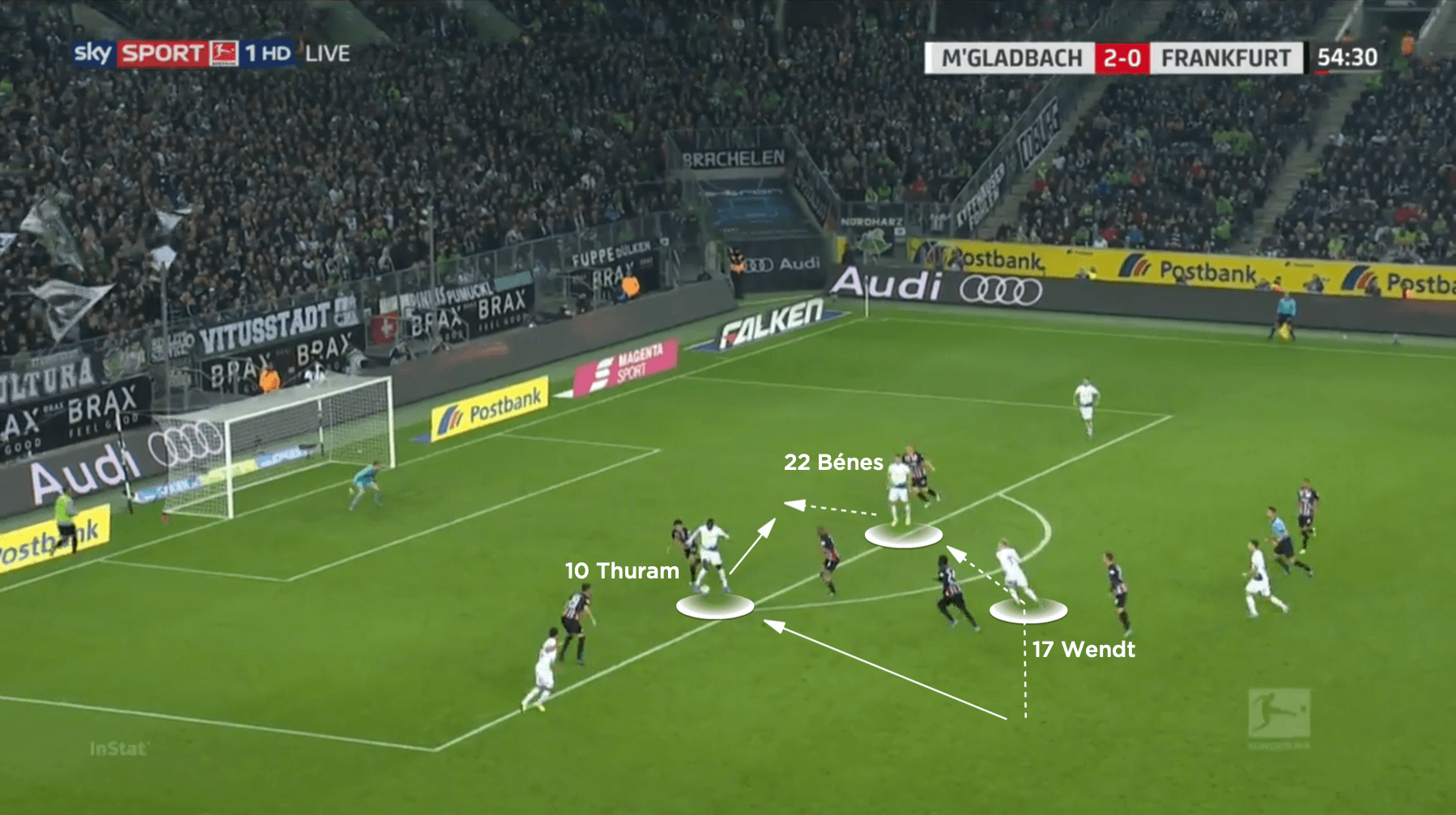 Defenders tend to try and remain as tight to Thuram as possible, to deny him the chance to dribble if he does get the ball under control. He is big, but he has brilliant close control and dribbling, and can find his way out of tight situations with impressive ease. He takes lots of small touches when he dribbles, and uses the outside of his foot to do so – meaning he is constantly poised to flick the ball to a teammate with very little backlift, or simply continue to dribble. This makes him very difficult for defenders to predict so he draws a large number of fouls. This has proven particularly useful for Gladbach, who rank sixth in the 2019/20 Bundesliga for goals from set-piece situations.

Role for Gladbach
The 6ft 3ins Thuram poses a significant threat from crosses himself, of course, and ranks 11th in the Bundesliga and fifth among attackers for aerial duels won over the course of the 2019/20 season. As well as providing an extra goal threat, this is also a very useful outlet for goalkeeper Yann Sommer and the defenders if they need to play a long ball. Given Thuram usually plays on the left, he tends to come up against a full-back in the air and therefore enjoys more success than he might against a centre-back. This was a tactic Roberto Martínez sometimes used during his time at Everton, when he often stationed Romelu Lukaku wide, to challenge for high balls against a smaller full-back, as a quick route up field. 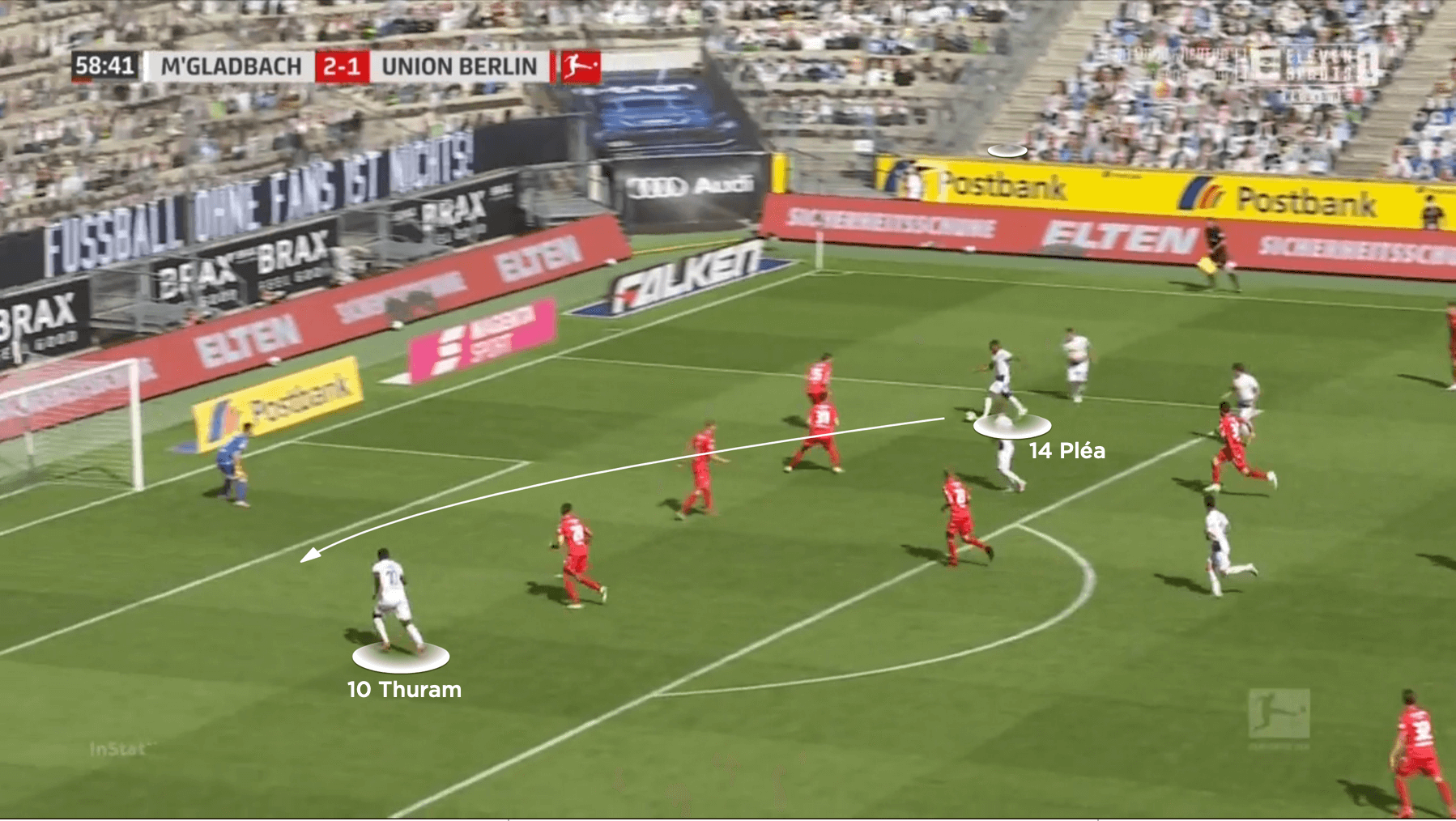 Much of Thuram’s role in this team is as a foil for others until the moment comes where he can jump in to make a key contribution. His infrequent involvement in build-up play is a good indication of his footballing intelligence. Opponents move with play, so his willingness to drift away from play or simply stand still means defenders can lose track of him. He therefore often has the element of surprise on his side, so it perhaps makes sense that the majority of his goals are scored off one touch and after he has ghosted into a position in the box on the blindside of his opponent (above).

He has also demonstrated the ability to lay on easy finishes for teammates himself – often by isolating a full-back, beating them for pace on the outside and playing a square ball across goal for a straightforward finish for a teammate. This offers yet more evidence of his intelligence and selflessness – and his Gladbach teammates are reaping the benefits.

Thuram is having a breakthrough Bundesliga season to remember, and he is starting to show that he belongs at the top a of major European league. With the right coaching and guidance, as well as the possibility of exposure to Champions League football next season, he could easily keep improving at the impressive rate he has so far progressed. 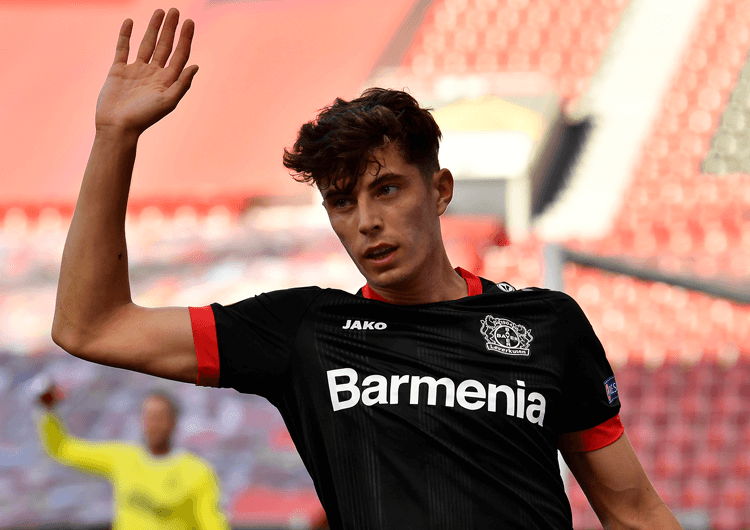 Kai Havertz is one of Germany’s most exciting talents, and chose to leave Bayer Leverkusen for Chelsea, where he joins Timo Werner. We analyse him 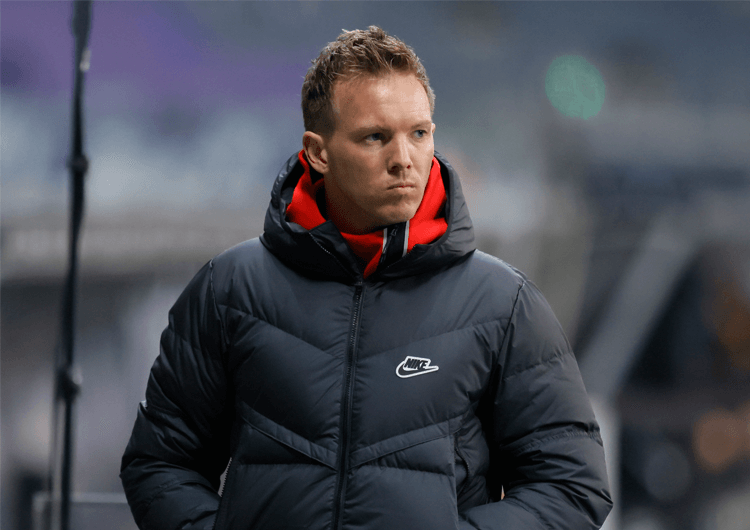 RB Leipzig’s Julian Nagelsmann has long been considered one of the most promising managers of the coming generation. We examine exactly why 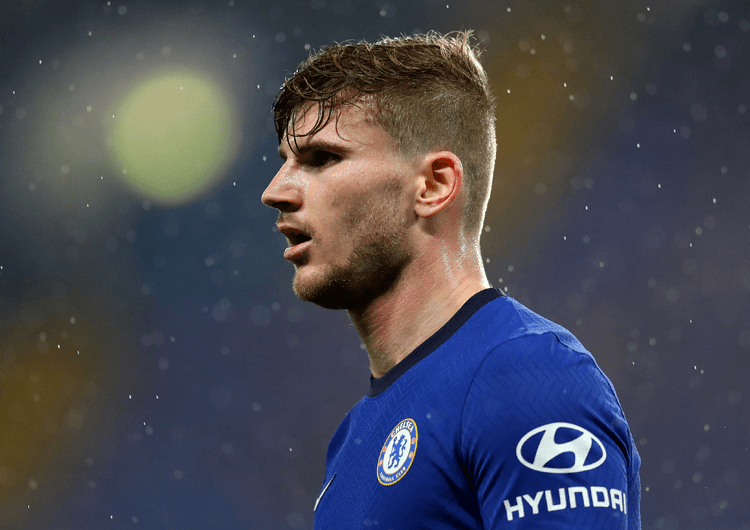 Having added all-round play to his game under Julian Nagelsmann’s guidance, Werner has become an increasingly complete forward. We assess him at Chelsea