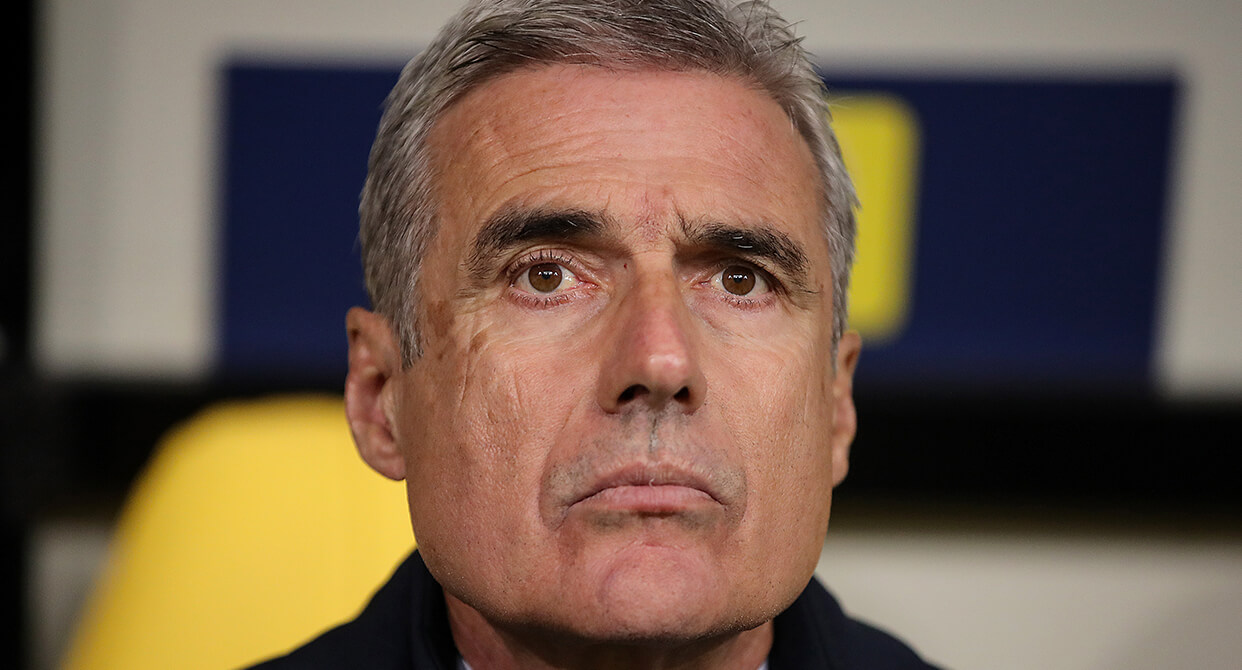 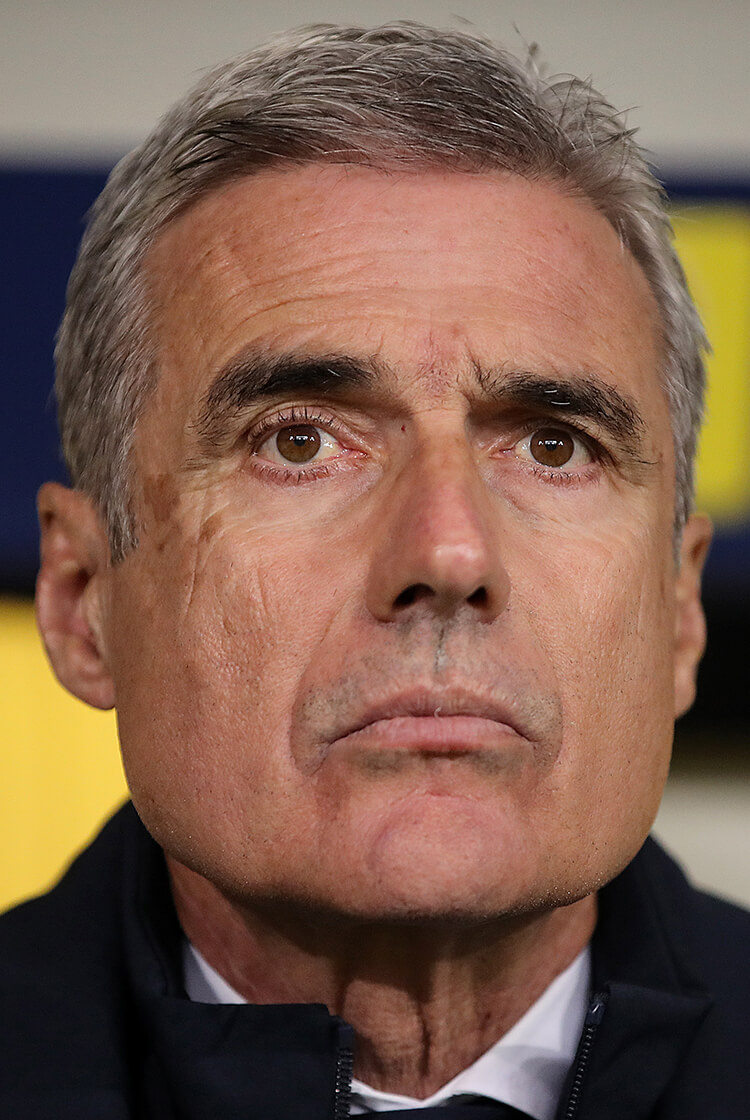 We have all travelled a path.

That path has an impact on how we see the game. We are affected by all our experiences along the way.

It's also true that everyone has a matrix – an idea set in our minds – but we shape it as we have new experiences.

Everything began for me as it normally does with children. Running with a ball at my feet – in the street, at school, on the beach. That rudimentary game – when we are with the ball and our friends – is the birth of passion for football.

Then we notice a key aspect of the game – its competitiveness. Everyone wants to win, and the appetite for winning increases with time.

However, with maturity comes an interest in how to win. If in childhood what matters is winning, later we pay attention to aesthetics – the way to build the desired result.

I was 11 when I started playing for a club. From then on, the organisation of the game started to play out in my head. Football became more organised, but without too much complexity. That comes with professionalism.

The complexity of the game is something that tests us. Some of us respond well; others, like me, find it harder to develop. It might be a technical, physical, psychological or tactical obstacle. If you fail in any of those areas, you begin to fall behind.

As a footballer, I had an intense relationship with the game. Even though I had my difficulties, I managed to play professionally until I was 35. When we like something so much, we basically want to keep doing it for life.

Unfortunately, we can't play until we’re 70. So how can I carry on in football after my retirement as a player? From the answer to this question, my desire to become a manager was born.

"Being a football manager is to be destroyed at every game"

I had been captain for 14 years of my playing career. Often the captain is elected by the squad. My teammates chose me, and I felt good in the role.

I assumed that leadership could be key in the shift from player to coach. While I was still playing, I also had an unusual experience – managing the Under-13s at Águeda, the club I was playing for. I enjoyed it a lot.

A lot of the time we say we shouldn't stipulate rules for children's football. The argument is that rules will take them down pre-set paths, taking away the pleasure of discovering new things. But a child without rules is plunged into chaos.

I decided to show them ways that would be helpful to developing their talent. So the day I retired as a player, Águeda offered me the post of first-team manager.

There is no such thing as a perfect career. Everyone’s is unique to them, and there will always be difficulties. You can’t assume that anyone who starts managing at a big club didn't have any. Difficulties are intrinsic to any manager's career.

Being a football manager is to be destroyed every game, just to be rebuilt during the week until the next game. That’s the dynamic – you are constantly under reconstruction.

The unknown will always cause us discomfort. What will I find? What have the opposition got lined up for us? What should I do? Should I go here or there? The richer and more developed my own idea is, the more prepared I am to face other playing ideas.

A rich style of play will always have several different styles of attack and defence. You have to know how to take a different route. You will find teams that won't let you go anywhere – although that's another conversation.

I was already managing in the Primeira Liga – Portugal's top flight – at Penafiel when I received an offer to become the technical director of FC Porto's youth teams. I would be managing more than 20 grassroots coaches, something I had never done. It was obviously a tough decision, as I couldn't be sure whether or not I was ready.

I decided to give it a try, and I spent the following seven years in the job. Leading the process, and choosing professionals.

At times we tend to look at what someone knows when it comes to doing a specific job. I prefer to look at it a different way. What human values does that person have to do the job? If you choose according to the values a person has, it will be easier for that person to do a good job. Technical knowledge without human values might bring everything crashing down.

It was a good time in my life. Working at Porto is all about structure. It doesn't depend on one, two or three people. My interest was in having good leaders; good coaches able to show the best way to develop each youngster.

Whenever people talk to me about being Porto's first-team coach, I ask them if it’s right to say I was the manager, seeing as I only stayed in the job three months.

I was there to complete a transition, but it was a difficult time because we basically couldn't train. We were competing in the Europa League, the two national cups, and the Portuguese league. I was more like an administrator than a coach.

Are we coaches? I don't know. We play on Tuesday or Wednesday, and then again at the weekend. Then all over again. Then comes the international break, and can we enjoy some rest or training? A lot of players go to their national teams and return after playing two or three games in what is supposed to be a closed period.

Nowadays, a manager almost has to be an engineer to find his line-up. The football calendar allows for playing and recovery. There isn’t time for much training, so it’s no surprise that we see such instability at basically every club.

I was at Porto B when the opportunity arose to manage the first team. It wasn't the right time for me. But that's how our profession works. The opportunities don’t always come when you imagine they will.

After that brief experience, I went back to Porto B and we won the Portuguese second division. That was the first time a B team from any club had won a competition in Portugal. That trophy rekindled my enthusiasm to be a manager after several years working as a director.

"Shakhtar has scouted for fantastic footballers in Brazil for a while"

I decided it was time to find a new challenge, and Rio Ave opened the doors for me. I had no doubt that that was my natural path. It was crystal clear how much I enjoyed being a coach.

From Rio Ave, I went to Chaves and we finished sixth in the league. Then I moved to Vitória Guimarães and we came fifth in the Primeira Liga, giving us a place in the Europa League.

After that successful spell at Vitória, I had offers from Asia, Africa and Europe. My staff and I chose Shakhtar Donetsk, a club that has been getting more attention on the European stage. We made the right choice.

Shakhtar is a very interesting project. The squad is a mix of talented youngsters and experienced players. The group is basically made up of Brazilians and Ukrainians; we also have a Georgian and an Israeli.

Football has a universal language, and whoever plays the game understands this. There are no cultural barriers or communication issues on the pitch. Our players understand each other.

Shakhtar has scouted for fantastic footballers in Brazil for a while, and the club has been taking advantage of their talent on the pitch before eventually selling some of them for considerable fees. It's a successful recipe that always brings positive results.

"I have overcome obstacles that have seemed insurmountable"

The club chairman leads the project along with his directors. The idea is to identify talented youngsters in Brazil as well as in Shakhtar's academy, and give them time to adapt to the club among the experienced players who have undergone the same process. The project has proved successful in every respect.

We are creatures of habit though, aren’t we? I also found Shakhtar was accustomed to an exhausting routine. The Donetsk conflict hit and the club had to move to Kiev. The players moved there to live and train.

However, at first they were playing home games in Lviv. Then in Kharkiv. More recently, the club started playing in Kiev. For several years, the travel was ridiculous. Last season we probably made 90 or so trips – that leaves its mark on a team.

Despite that, last season was very gratifying for us, even though defeat to Inter Milan in the Europa League semi finals was tough to handle. We felt we could have gone further.

It was an outstanding season, anyway. Not only in what we achieved, but in how we did it. Sometimes we win and want to forget how we played, but not in this case. I want to highlight and appreciate the value of how we built those victories.

I never envy any other path in life. I followed mine overcoming obstacles that seemed insurmountable. But there’s something interesting about football – nothing is really impossible.

Any team can beat any opponent. A manager can potentially work for any club. Things happen all the time, and you shouldn’t build barriers for yourself.

Letting life run its course doesn't mean being passive. It's your duty to give your all to your profession. What happens after that is beyond our control.

I am taking my own path. I have made my way through the different divisions – local, third, second and first in Portugal. I have reached the Europa League, and now the Champions League.

Before you know it, you’ve gone through all those stages. And here I am.