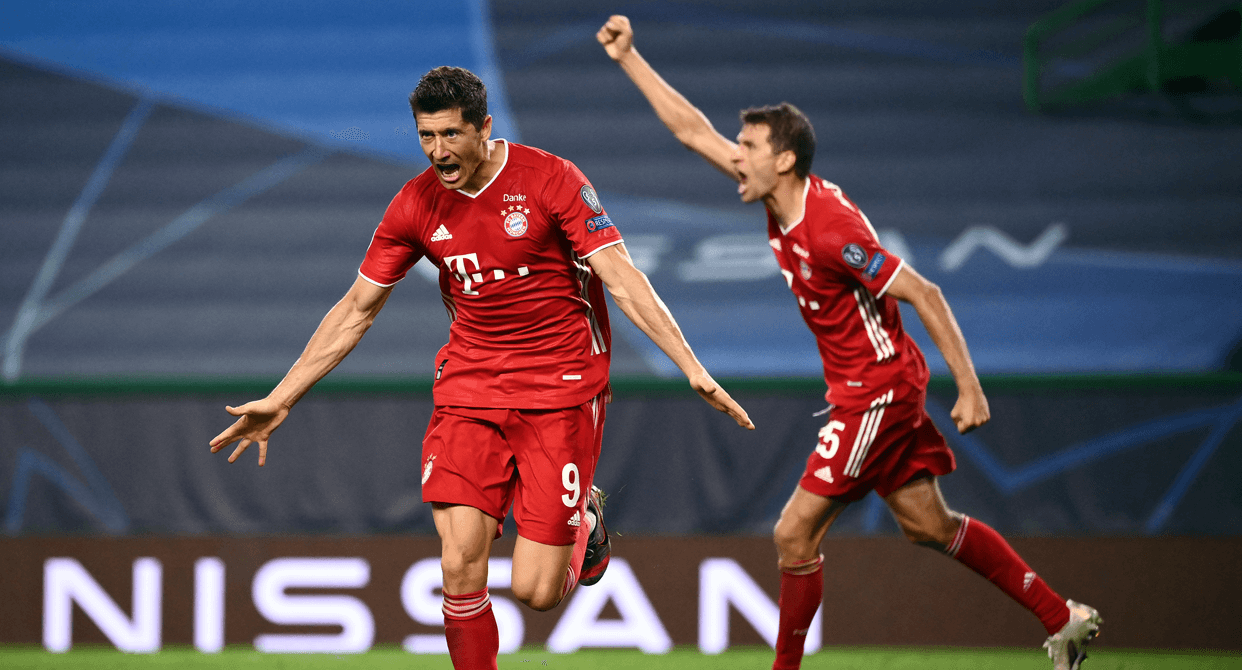 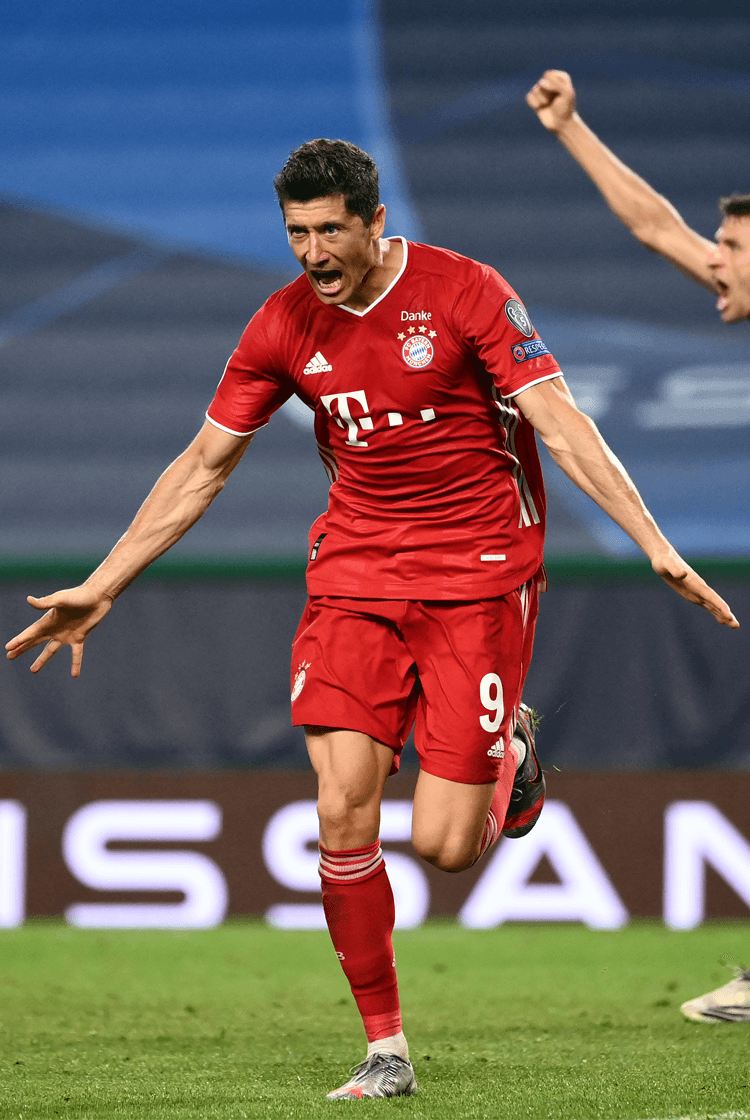 Bayern Munich eased past Lyon to reach the Champions League final against Paris Saint-Germain after recording their 10th successive victory in Europe's elite competition. Equalling a record they first set in 2013 and since matched by Real Madrid in 2015, once Serge Gnabry gave them the lead they largely took control, and extended an unbeaten run to 29 matches that started in December 2019. Gnabry added a second goal before half-time, and Robert Lewandowski scored a third in the final minutes. Bayern, incidentally, will be competing in their 11th Champions League final – equalling AC Milan's total, and a total only surpassed by Real Madrid's 16. Lyon substitute Rayan Cherki, aged just 17 years and two days, also became the youngest player to appear in the knockout stages of the competition. "(Lyon) are strong tactically and they caused us problems early on," said Bayern's manager Hansi Flick. "We know we need to defend better; we said before we couldn't afford to give away the ball easily, but we did." 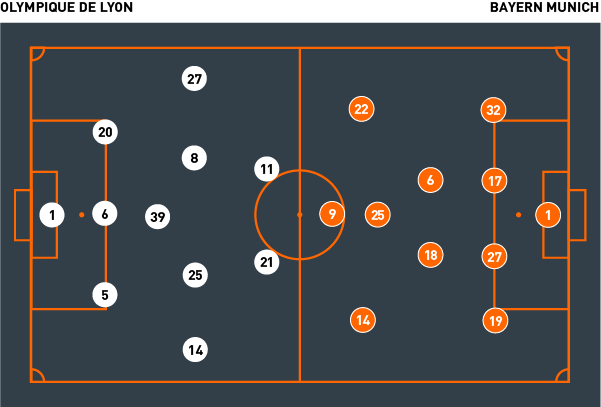 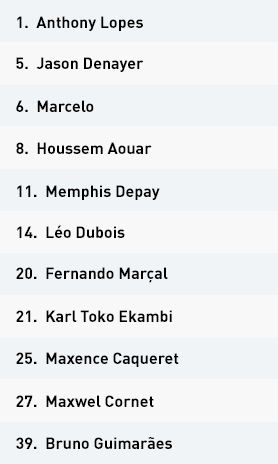 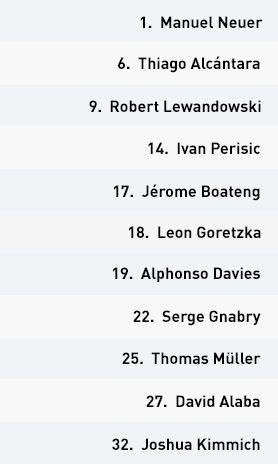 Olympique Lyonnais were organised by their manager Rudi Garcia into a  3-5-2 formation led by the front two of Karl Toko Ekambi and Memphis Depay. Bayern Munich remained in their 4-2-3-1, and sought to apply a high, man-oriented press led by Robert Lewandowski that only changed if possession travelled wide, when their far-side full-back would tuck in alongside the two central defenders alongside him to create a three-on-two against Lyon's front two. Lyon's far-side wing-back may have remained free, but he did not pose a threat; if a long, diagonal switch of play was attempted, Bayern were capable of shuffling across to pressure the player receiving possession.

Lyon therefore posed their greatest threat on the counter. At turnovers of possession, Depay or Ekambi – sometimes both – quickly made runs in behind, and their teammates sought to play towards them as early as possible. On the rare occasions they were able to build possession, they retained a reasonably narrow midfield from which Houssem Aouar and their wing-backs would advance most.


They sought to play forward passes into the half-spaces that existed between the relevant opposing full-back and central defender, or wide of that full-back towards an attacker or wing-back. The dynamism of their attacks initially threatened Bayern, and to the extent that Lyon perhaps should have taken the lead, but Manuel Neuer's goalkeeping and blocks made by Bayern's defenders denied them.

Even as the evening progressed, Lyon continued to succeed in accessing spaces behind Bayern's defence, but they continued to struggle to apply the finishing touch. Alphonso Davies' athleticism made it particularly difficult for them to advance towards the right, owing to his ability to protect the spaces behind him and his effectiveness during defensive transitions, in which he would recover his position and prevent attempted counter-attacks.

Bayern Munich operated with Hansi Flick's favoured 4-2-3-1 formation, built on the double pivot this time provided by Thiago Alcántara and Leon Goretzka. They were confronted by opponents who defended with a 5-3-2 mid-block.

The Bundesliga champions dominated possession while trying to break down that block. Lyon's front two of Memphis Depay and Karl Toko Ekambi pressed the outside shoulder of their central defenders with a line of engagement near the halfway line, with the intention of forcing Bayern to keep possession in the central areas of the pitch. Lyon had numbers there, and the positioning of their front two gave them the potential to counter between the relevant central defender and full-back.

Where Thiago would operate from a deep position to, with the central defenders alongside him, create a three-on-two against Lyon's front two, Goretzka adopted a more advanced one to draw an opposing central midfielder. When another central midfielder advanced to negate the three-on-two Thiago had contributed to, and the third prioritised Thomas Müller, Joshua Kimmich and Alphonso Davies were freed up to create two-on-ones with Serge Gnabry and Ivan Perisic.

When that ultimately create a six-on-five in Bayern's favour against Lyon's defence, Lyon adjusted by accepting the three-on-two overload that existed against their front two and instead prioritised remaining compact in the central areas of the pitch and providing improved cover if possession travelled wide. Bayern's attacking players also rotated with each other, which further challenged their opponents, forcing them to choose between holding their positions or tracking those rotations.


Bayern sought to maximise the effectiveness of those rotations by drawing defenders with one player while another made a penetrative run into the space being vacated and was then targeted by a pass from a deeper position. If the defender chose to hold his position, passes would instead be played to the attacker withdrawing into a deeper position. These approaches, following a run in behind by Müller, could be seen when Gnabry scored his first goal.

Depay was replaced by Moussa Dembélé during the second half, and by Houseem Aouar advancing towards the left and Ekambi playing towards the right they often adopted a 5-2-3. By Dembélé moving to between Bayern's central defenders, flanked by Aouar and Ekambi, that front three attempted to negate the attempts of Bayern's defence to build possession.

If this challenged Flick's team, they adjusted through Gnabry and Kingsley Coman, who had replaced Perisic, withdrawing from their wide positions into the half-spaces to receive passes from central defence on the outside of Lyon's two central midfielders, whose priority remained Goretzka and Thiago. The new passing option they provided encourage straightforward penetrations.