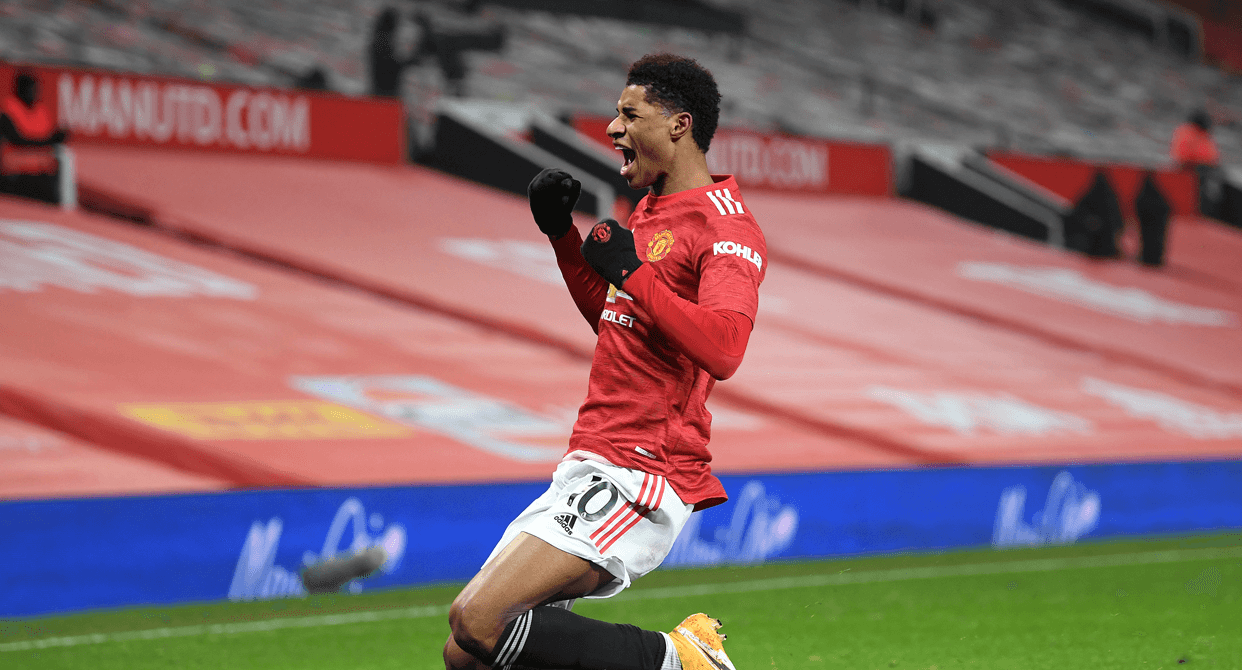 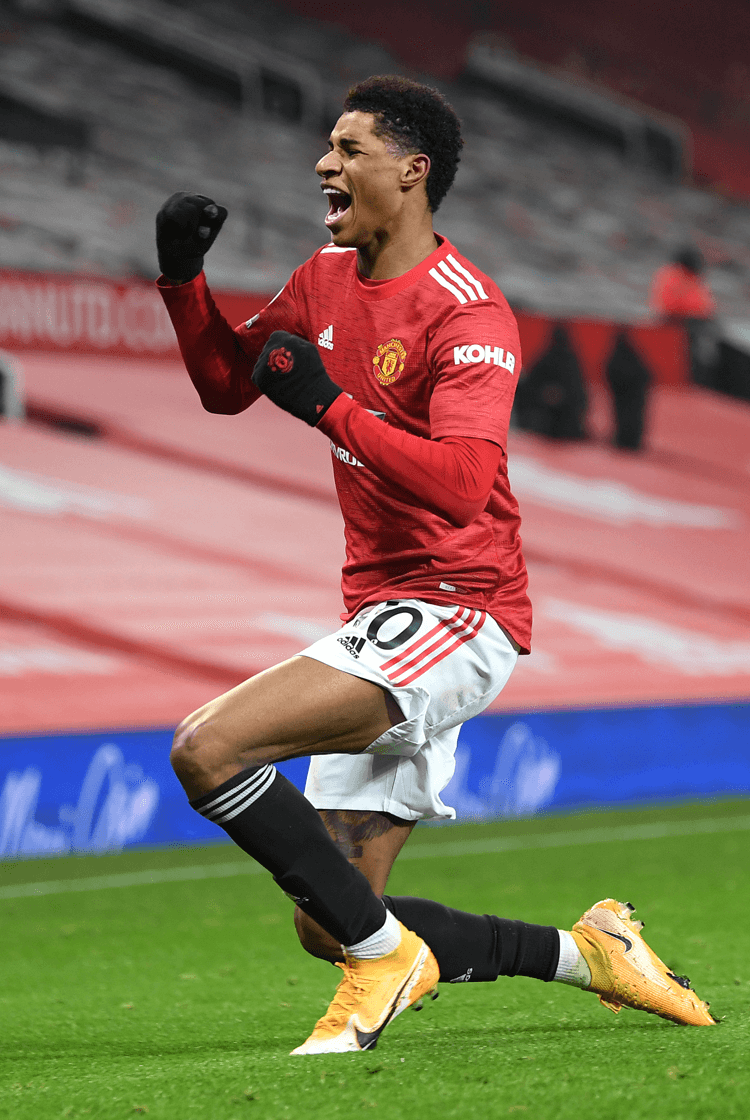 Manchester United climbed to second in the Premier League as an often-difficult year ended on the high of beating Wolves via Marcus Rashford's stoppage-time goal. The talented forward scored, via a significant deflection off of Romain Saïss, with what represented their last chance of securing all three points and narrowing the gap between them and leaders Liverpool. Their manager, Ole Gunnar Solskjaer, regardless refused to declare them contenders for the Premier League title. "There's no title race after 15 games," he said. "You can lose the chance of being in the race in the first 10 games of course but play another 15 and get to 30 maybe, then we can start talking about it when we've at least played more than half the season. The belief is there. They think 'We can win against anyone, anywhere'. This result is massive for the attitude." His opposite number, Nuno Espírito Santo, said: "This is football and a learning process. It's cruel in the moment but you can't stay feeling sorry – you have to move forward. We created chances, sometimes we should finish more." 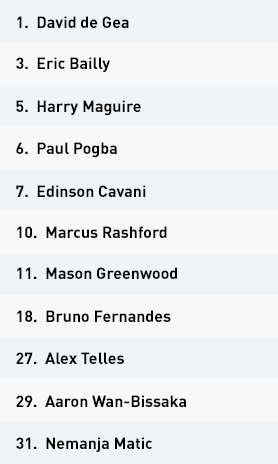 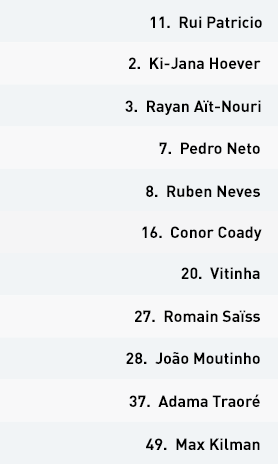 Manchester United were organised by their manager Ole Gunnar Solskjaer into a 4-2-3-1 formation led by Edinson Cavani. Their opponents, Wolves, defended with a 5-2-3.

Wolves provided a disciplined and organised defensive structure. Adama Traoré and Pedro Neto initially had passive roles that involved them occupying the half-spaces and screening passes into United's wide attackers when United's central defenders had possession, but without applying anything more than limited pressure to those central defenders, who they also allowed to play to their full-backs.

Vitinha prioritised Paul Pogba, and João Moutinho or Ruben Neves would move to press the relevant full-back, particularly if they were receiving possession in the attacking half. With Nemanja Matic regularly featuring as a false left-back during their attempts to build play, Alex Telles advanced to create a two-on-one with Marcus Rashford against Ki-Jana Hoever; Matic's positioning also provided security against the potential of Traoré.

That passes to their full-backs were so often available initially made that the base for United's efforts to progress possession; diagonal passes were played to one, drawing one of Wolves' central midfielders, and were followed by switches of play to the far-side wide attacker who was being supported by an overlapping run by the other full-back. Wolves' three central defenders remained compact, and followed the runs of United's attackers to prevent them from receiving with time and space.


Despite Rui Patricio's authority, and the presence of their wing-backs ensuring that Wolves could consistently retain three central defenders inside the penalty area when United were attempting crosses, United continued to treat crosses as their favoured means of creating goalscoring chances. Wolves' compact structure made it difficult for United to advance through the centre of the pitch, contributing to that, but United offered too few numbers in the area for their crossing to prove effective.

An alternative involved intricate combinations around the area; wall passes were used to isolate one of Wolves' wider central defenders, and complemented by penetrative runs in behind. Conor Coady, regardless, particularly impressed in organising Wolves' defensive line and covering the forward runs that went untracked, and those around him also regularly closed down the ball and prevented quality chances from being created.

A further approach involved clipped passes being played in behind, from deep positions, into the path of penetrative runs, but in addition to Wolves defending impressively, the space that existed in behind was so limited that the timing of the run and weight of the pass had to be particularly accurate. Even then the nature of the delivery made finishing difficult.

Pogba later adopted a more attacking role, which increased the potential of United's combinations. It was perhaps Wolves' enthusiasm in defence that ultimately undermined them; a significant deflection beat Patricio in stoppage time.

Wolves were set up by their manager Nuno Espírito Santo into a 3-4-1-2 formation in which Adama Traoré and Pedro Neto formed their less familiar front two. Their hosts, Manchester United, remained in their favoured 4-2-3-1 while they defended.

United attempted to force play to one side, via Edinson Cavani chasing the ball to one of Wolves' wider central defenders and then closing down his inside shoulder to restrict access into Conor Coady and Rui Patricio. Bruno Fernandes prioritised the ballside central midfielder, and the relevant wide attacker remained ready to engage the wing-back opposite him.

João Moutinho and Ruben Neves adopted narrow positions as Wolves built from defence, in an attempt to draw Fernandes and one of United's wide attackers, in turn creating potential switches of play to the far-side central defender, who then played forwards to the wing-back in front of him. Wolves favoured diagonal passes into feet to encourage switches of play and penetrative runs; United were drawn to one side of the pitch and the ball was then gradually played towards the other.

In the knowledge that United's defensive line would move across to cover, when Wolves worked possession back inside the far-side wide attacker dropped into the opposite half-space to receive a diagonal pass while a wing-back advanced outside of him, giving them the potential to advance beyond United's midfield and to create two-on-ones against a full-back.  Further options to feet existed during moments of building play, but a lack of penetrative runs during those moments largely undermined their attempts to continue to progress possession.

For all of their intelligence, they also attempted direct passes towards Traoré, who competed aerially and sought to bring possession under control and then to create. His significant threat when attacking one-on-one meant Wolves regularly looked to him to create goalscoring chances, but his technique too regularly let him down when he was needed to control or pass the ball. Traoré and Neto gave Wolves potential on the counter, but their technical quality again meant that David de Gea was only tested at set-pieces.