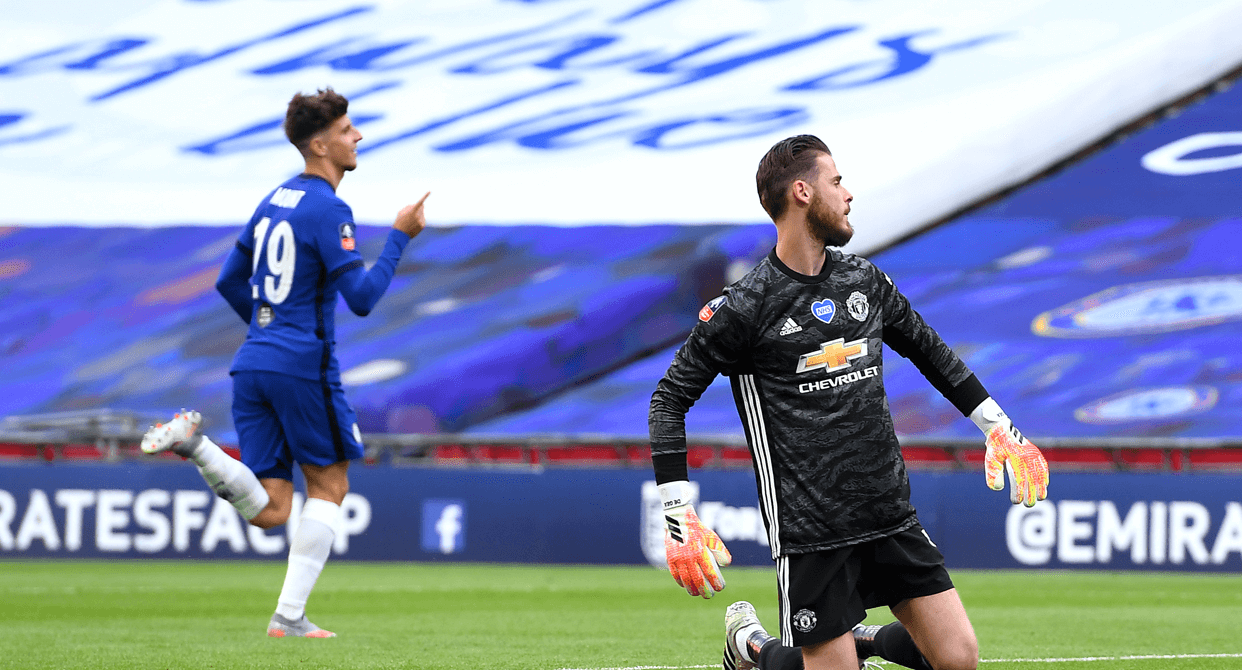 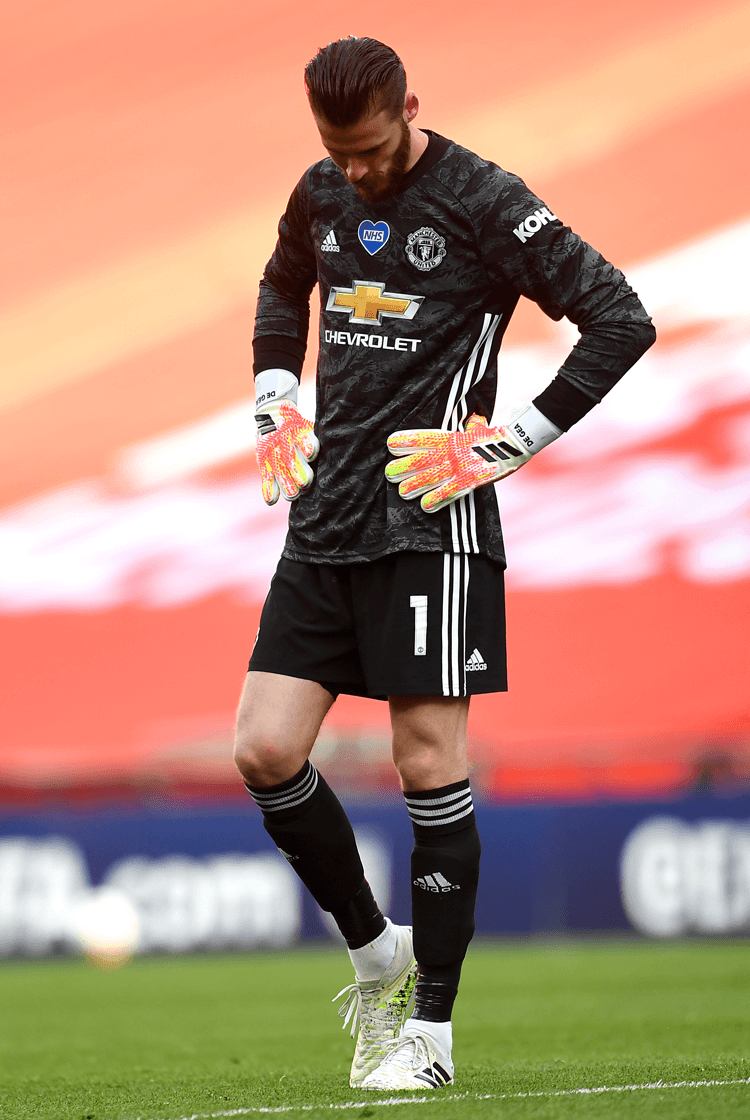 Chelsea progressed to the FA Cup final at Manchester United's expense when two errors from David de Gea contributed to two of their goals in a convincing victory. The Spaniard, chosen over Sergio Romero despite the Argentinian previously being preferred by Ole Gunnar Solskjaer in the FA Cup, made mistakes that led to goals for Olivier Giroud and Mason Mount. When Harry Maguire scored an own goal late in the second half, Chelsea's place in the final at Wembley against Arsenal – who had eliminated Manchester City – was secured, regardless of Bruno Fernandes' later penalty. Their victory represented Chelsea's first over United since the final in 2018. "We are working towards something," said Chelsea's manager Frank Lampard. "It doesn't come easy. We have seen that with other teams in recent years. It is step by step. Three games won't define the progress we have made but we are at the business end (of the season)." 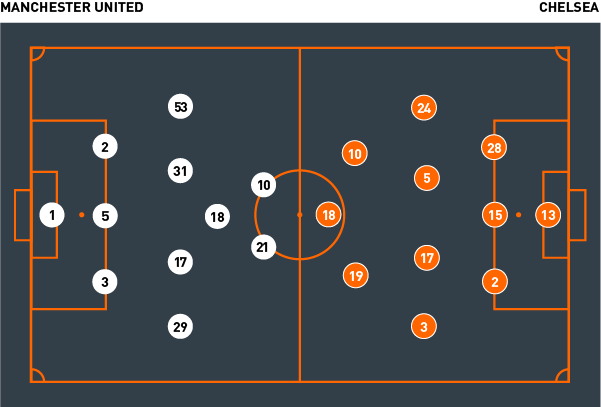 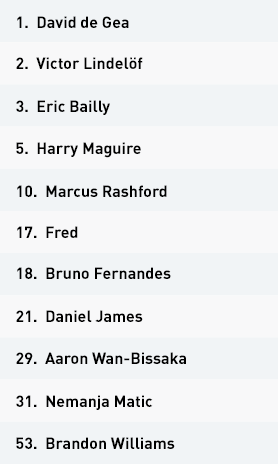 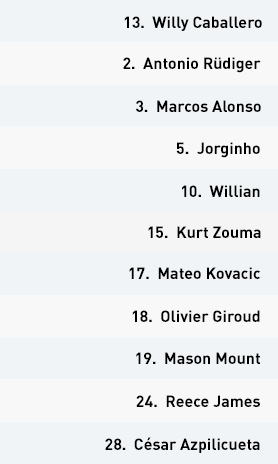 Manchester United were organised by their manager Ole Gunnar Solskjaer into a 3-4-1-2 formation in which Bruno Fernandes featured behind the front two of Marcus Rashford and Daniel James. They struggled to build through Chelsea’s 5-2-3 defensive block, and largely because Chelsea's front three of Mason Mount, Willian, and Olivier Giroud convincingly pressed United's central defenders.

By marking man-for-man across the pitch, Chelsea restricted access into Fernandes beyond Chelsea’s narrow central midfield with intelligent pressing towards the wider spaces, encouraging United to play around or over their block. Fernandes therefore regularly had to withdraw to in front of Jorginho and Kovacic, further increasing the distance between he and Rashford and James.

United struggled to target the spaces behind Chelsea's defence, despite them employing a high defensive line. For all that Rashford and James represent suitable targets to play into those spaces, the angle of the passes played rarely complemented the runs they made. Kovacic and Jorginho had an overload against Fernandes, and they prioritised second balls which, with Nemanja Matic and Fred withdrawing into deeper positions to defend against Chelsea's attacks, succeeded against the unsupported Portuguese. United also attempted balls over Chelsea's press, but lacked the aerial ability Chelsea possessed with Olivier Giroud.


Eric Bailly's injury contributed to United adopting a 4-2-3-1, and Fernandes briefly posing an increased attacking threat, but goals on the stroke of and shortly after half-time for Chelsea gave them a commanding lead; individual errors from Brandon Williams and David de Gea were influential in those goals. With Willian and Mount drifting into central midfield to contribute to defending against Fernandes, Matic and Fred, United were also outnumbered there.

When Aaron Wan-Bissaka and Williams advanced from full-back, James and Rashford could adopt narrower positions, test Chelsea’s central defenders, and offer a more consistent option beyond Chelsea’s midfield. United struggled to play through Chelsea’s press, howeverm so the chances for those full-backs to attack were limited.

United targeted their wide players early, in transitions, in an attempt to both evade Chelsea's high press and to expose their high defensive line. With the pace provided by Rashford, James and substitute Mason Greenwood they had significant pace, but Frank Lampard's team continued to offer the numbers they required in defence to at least delay, if not cover, those attacks. Harry Maguire's own goal then put Chelsea's victory beyond doubt.

Frank Lampard set Chelsea up in a 3-4-3 formation, and they succeeded early on when building play with short passes against Manchester United’s out-of-possession 5-3-2. With Bruno Fernandes in a withdrawn role behind Marcus Rashford and Daniel James, Chelsea’s defence had a one-man overload; Mateo Kovacic and Jorginho offered bounce passes into the inside channels, where their wider central defenders, César Azpilicueta or Antonio Rüdiger, could then advance. Chelsea’s wide forwards, Mason Mount and Willian, drifted inside and into space away from United’s central defenders and on the outside of their central midfield three.

United responded through Fernandes moving higher so that they could press with a 3-4-3, which disrupted Chelsea’s build-up play. Lampard's team then started playing longer passes towards Olivier Giroud, who withdrew into the inside channels to create a passing lane directly from Chelsea’s wider central defenders. With United’s front three pressing high, Nemanja Matic and Fred pushed forwards, leaving space between the lines in which Giroud moved to receive long balls. He was rarely tracked into this space by an opponent, because of United's desire to preserve their defenive line. Eventually, however, they moved into a mid-block, encouraging Chelsea to build comfortably to the halfway line.

It was Azpilicueta’s role as Chelsea’s right-sided central defender that then proved key. He joined Willian and Reece James as a third attacker on the right, and offered crosses from a narrower position while Willian occupied Matic and James provided width around the outside of Brandon Williams. With Rashford not tracking the Spaniard's forward runs, he regularly found the space to provide the crosses, at which Marcos Alonso provided an increase aerial threat alongside Giroud.


Despite the potential this offered Chelsea, and the fact that they often won the ball back high up the pitch, goalscoring chances remained limited during the first half. It was when United adopted to a 4-2-3-1, following Eric Bailly’s withdrawal through injury, that Chelsea scored the opening goal. The increased space in the penalty area from which Azpilicueta could cross, after combining with Willian and James, resulted in Giroud finishing past David de Gea.

They almost doubled their lead early in the second half, when Mount intercepted a poor pass from Williams, drove forwards, and scored as De Gea made a woeful mistake. Increased spaces in United's defence helped Chelsea to again progress possession along the ground, and Giroud expertly operating between the lines to secure aerial passes meant that they also still had the option to play aerial balls. The width provided by James and Alonso drew United’s full-backs, creating spaces for Mount or Willian to attack around the outside of a central defender, inviting Chelsea’s midfielders to advance further fowards and to carry possession there.

What their attempts to move the ball from deep territory meant, however, was that Chelsea had less cover against early transitional balls, which United's wide players were ready and willing to pursue. Azpilicueta therefore increasingly chose to remain within Chelsea's back three, and to prioritise those attempts to advance. The responsibility instead fell to  Jorginho and Kovacic to move into the inside channels to form a triangle with the wide defender and attacker before then aiming for Giroud; such a move towards the left concluded with Alonso's cross being turned in by Harry Maguire. By the point of Fernandes' late penalty, victory was already secured.