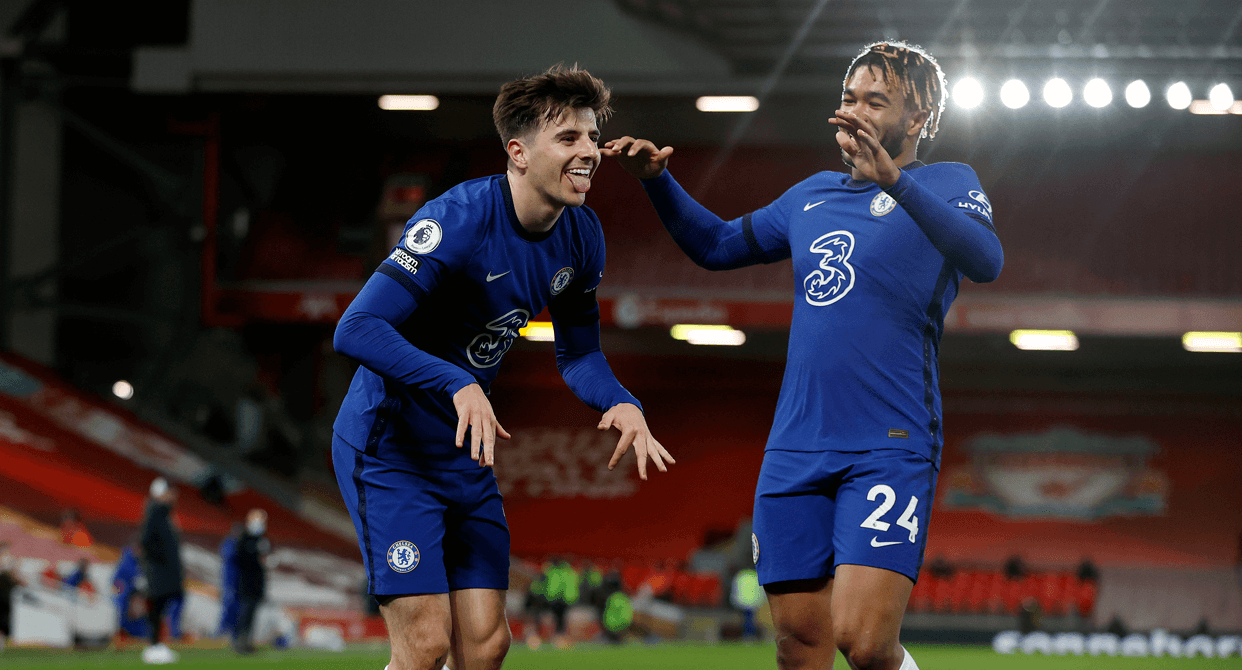 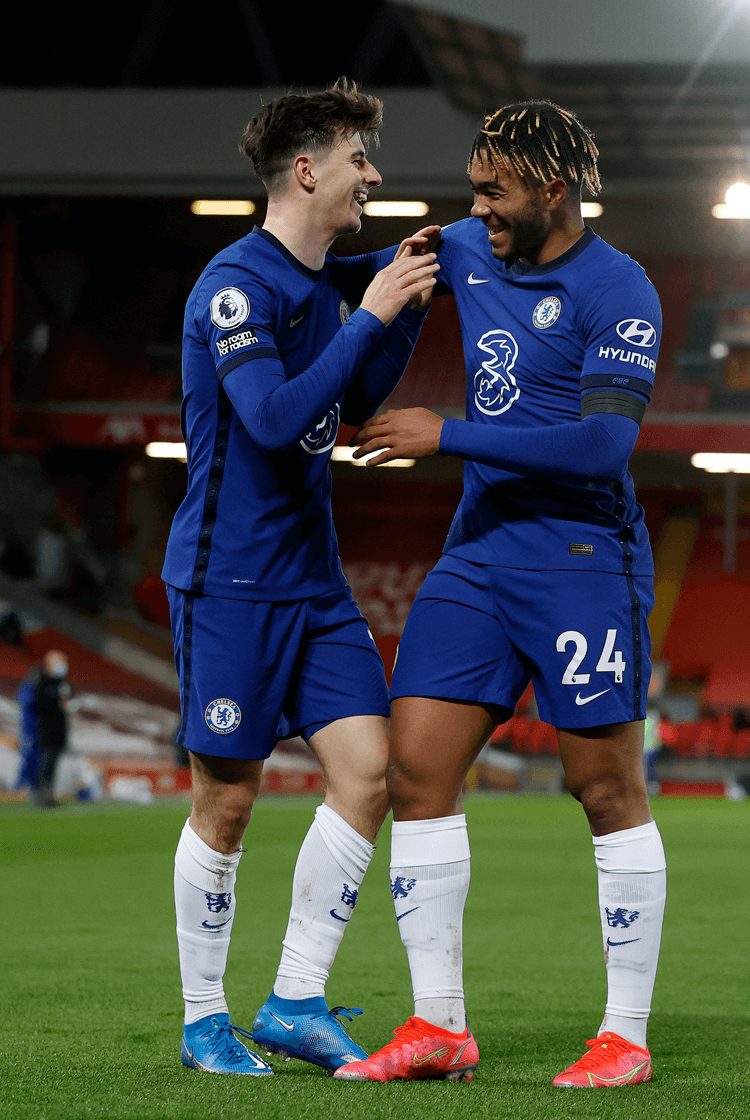 Chelsea inflicted, for the first time in Liverpool's history, a fifth successive home defeat on Jürgen Klopp’s team – leaving the reigning champions with an increasing struggle to finish in the Premier League's top four. Mason Mount's impressive strike shortly before half-time rewarded their dominance at Anfield, and extended Chelsea's unbeaten run under Thomas Tuchel – once Klopp's successor at Borussia Dortmund – to a 10th match. "We forced them to make mistakes, they forced us to make mistakes," said Klopp. "They used one, we didn't use ours." Tuchel said: "We were very brave with the ball and never lost intensity with the ball. We were always aggressive and very brave. This was the key. It was a top team performance and a deserved win." Liverpool have recorded just 10 points from 11 Premier League games in 2021 – only West Brom, Newcastle and Southampton have taken fewer. They are also the first English top-flight champions to lose five successive home league games. 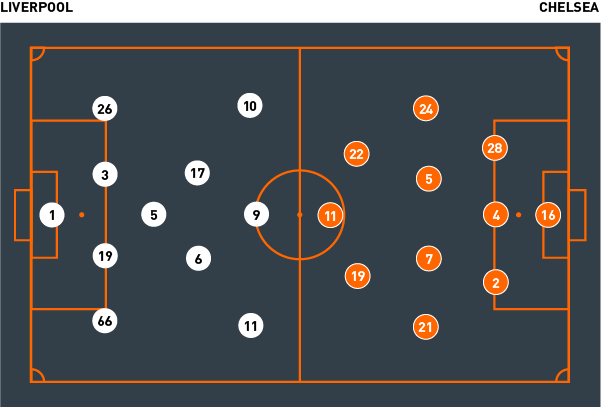 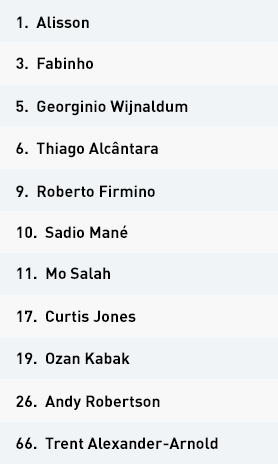 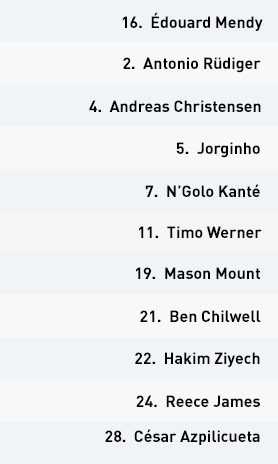 Liverpool were organised by their manager Jürgen Klopp into their long-favoured 4-3-3 formation that on this occasion featured Fabinho and Ozan Kabak in central defence. Their opponents, Chelsea, defended with a 5-3-2 led by Hakim Ziyech and Timo Werner, and with which they worked to minimise the spaces between their midfielders and front two to encourage Liverpool to play with width.

Ziyech and Werner sought to screen passes to Georginio Wijnaldum and Thiago Alcântara, the two most central of Liverpool's three midfielders, and Chelsea's three central midfielders were positioned behind them with sufficient width to cover both infield and wider. Reece James and Ben Chilwell, Chelsea's wing-backs, engaged when possession travelled wide, and the remaining four in their defensive line would adjust to defend balls into the penalty area or in behind, doing so behind Jorginho and N'Golo Kanté, who impressively provided defensive support.

Liverpool's struggles to build possession and create goalscoring opportunities meant that they started to attempt to overload Chelsea's front two – most commonly via Thiago adopting a position as a false full-back to create a back three with Fabinho and Kabak and to invite Trent Alexander-Arnold to advance, and therefore Mo Salah to drift infield. An alternative involved Alexander-Arnold moving into a more central position, Salah therefore remaining wide to provide their width, and Andy Robertson advancing to feature almost as a winger, from where he made attacking runs. Doing so ultimately contributed to them advancing into the attacking half.


The hosts regardless appeared to pose their greatest threat via longer passes in behind – Sadio Mané perhaps should have given them the lead after advancing in behind following one such pass. It will no doubt concern them that they recorded only one shot on target. They were surprisingly short of creativity.

Chelsea were set up by Thomas Tuchel into a 3-4-2-1 formation in which Timo Werner was supported by Hakim Ziyech and Mason Mount. Their hosts, Liverpool, remained in their 4-3-3.

Liverpool started by attempting to apply a man-oriented press to Chelsea's back three. Mo Salah and Sadio Mané sought to press the outside shoulder of their opposing central defender to force possession further infield and to screen passes into their wing-backs, which in turn would have drawn either Liverpool's full-backs forward or stretched their midfield three. When the far-side wide forward moved into a more central position to maintain their desired compactness, and Chelsea moved possession across their defence, the distance and angle regardless became too much for that wide forward to both pressure the ball and screen the relevant wing-back.

Their higher press also left Liverpool at risk of a four-on-three in midfield, via Mount and Ziyech withdrawing to form a box with Jorginho and N'Golo Kanté around Thiago Alcântara and Curtis Jones. When they did, their front three were forced to withdraw into a deeper position to transform that four-on-three into a six-on-four in Liverpool's favour, after which Chelsea were able to access their wing-backs and stretch play further, forcing Liverpool to shuffle across and risk leaving spaces.


Chelsea's far-side attacking midfielder regularly attempted to remain wide of Liverpool's three central midfielders, and the wing-back alongside him wide of his opposing full-back. By the attacking midfielder being accessible via a diagonal pass, a two-on-one was created in a wide area – Mount and Ben Chilwell regularly troubled Jürgen Klopp’s team, and contributed to the creation of some quality goalscoring chances.

The visitors also targeted accessing the spaces in behind Liverpool's defence. Werner's selection owed much to a desire to take advantage of that defence's high positioning – only a narrow offside decision prevented him from scoring. Chelsea also impressively built possession while under pressure – often via one-touch football in their defensive third – to create numerically favourable situations with which they drew their opponents out of position and played around them. A switch of play often followed, creating a further two-on-one. Liverpool repeatedly struggled to resist their efforts to do so.