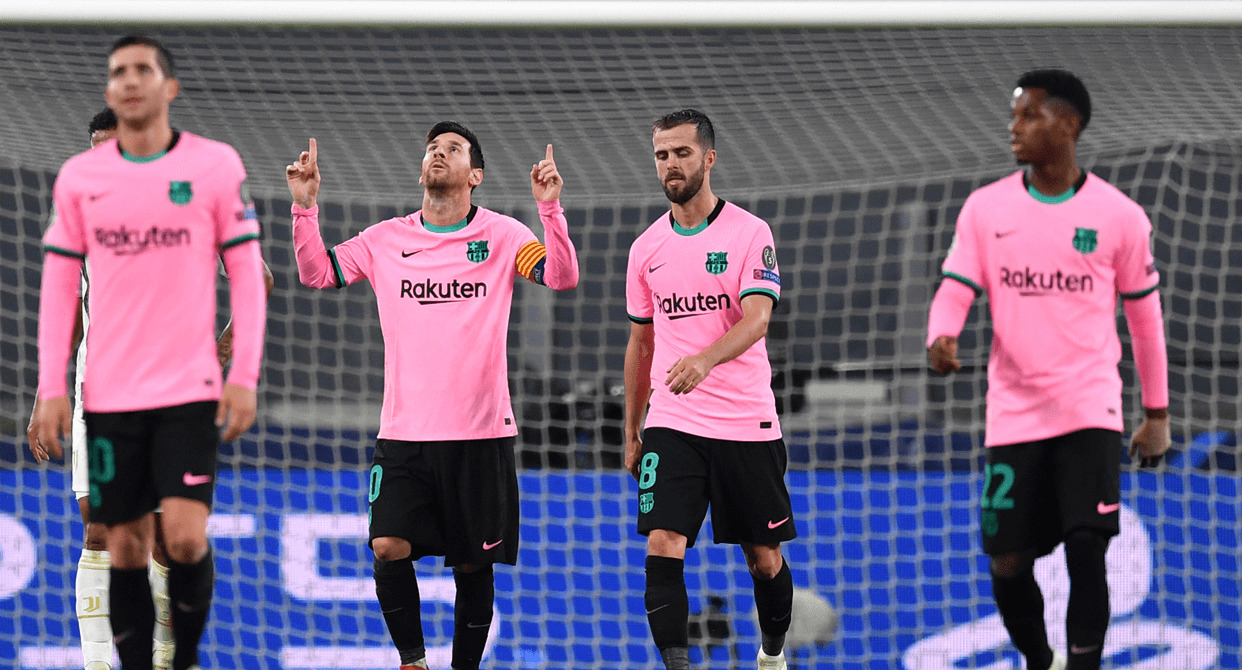 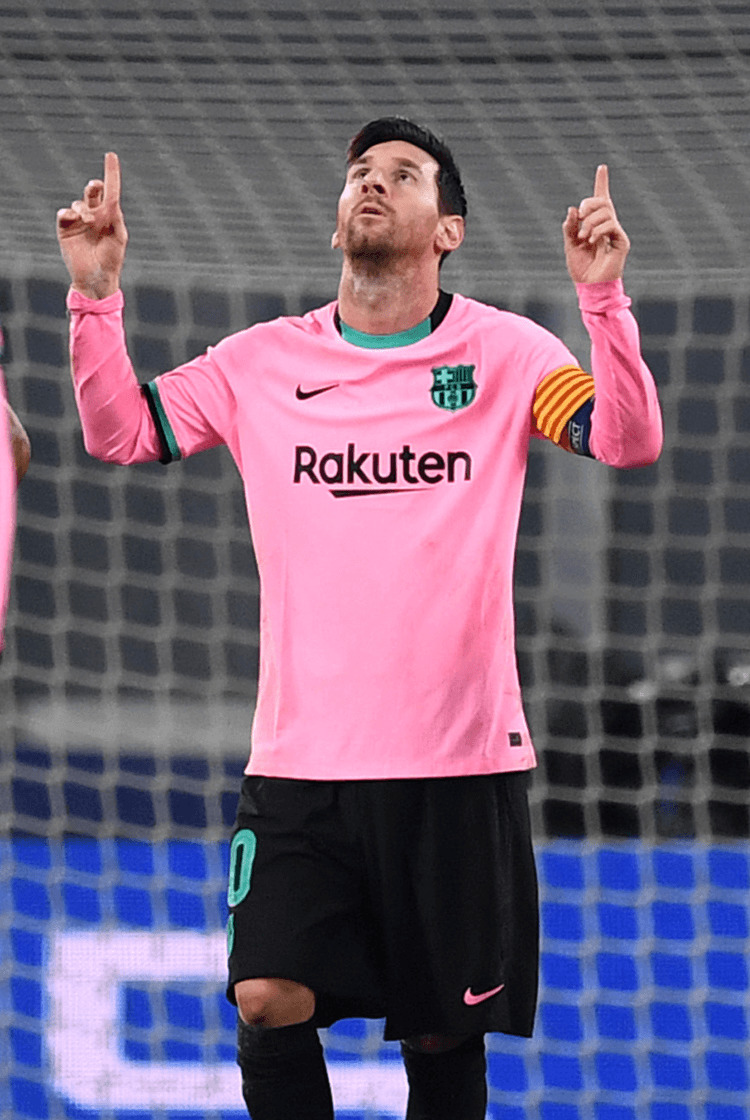 Barcelona ran out comfortable winners at Juventus as they took the lead at the top of Group G in the Champions League and, in doing so, took a big step towards the knockout stages, potentially igniting Ronald Koeman's reign as their manager. On an evening that would have renewed the rivalry between Lionel Messi and Cristiano Ronaldo were it not for the Portuguese's positive test for Covid, it was Koeman's team who came out on top. Ousmane Dembélé opened the scoring with a heavily-deflected effort on his return to their starting line-up, and Messi secured victory with a late penalty following a rash challenge by Federico Bernardeschi. "I'm very content with the football we played, with the result and especially with the character my team showed," Koeman said. "We created a lot of goal chances and, frankly, I think we should have finished the match off much earlier." His opposite number Andrea Pirlo said: "Ultimately, it’s a match that will be useful for us to grow and improve in future. We need to work and improve until we can play Barcelona on level terms." 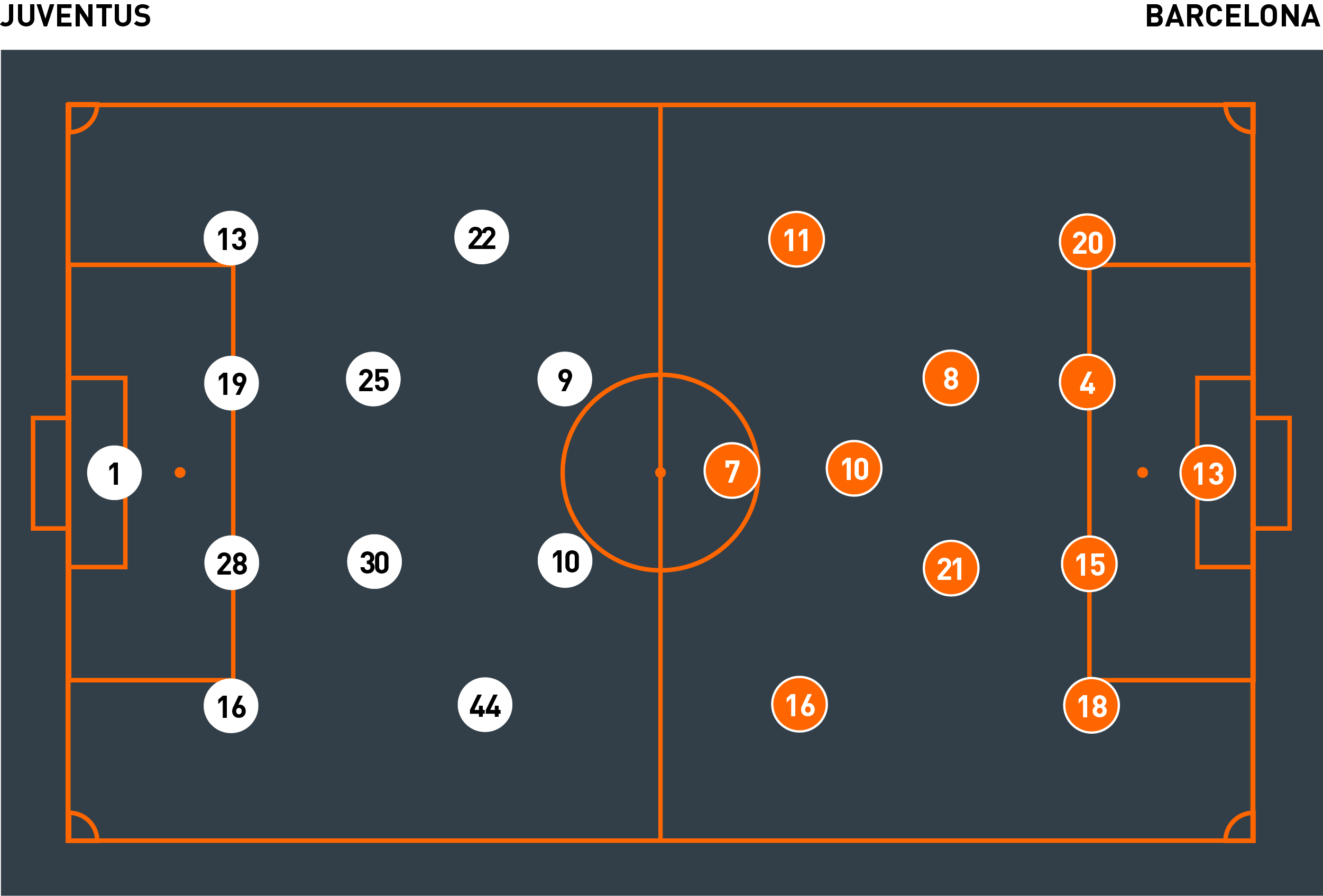 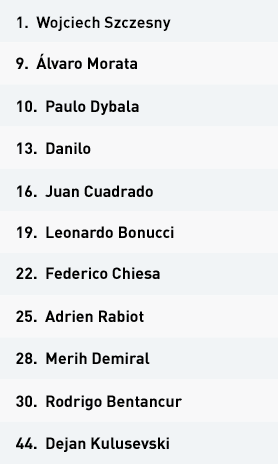 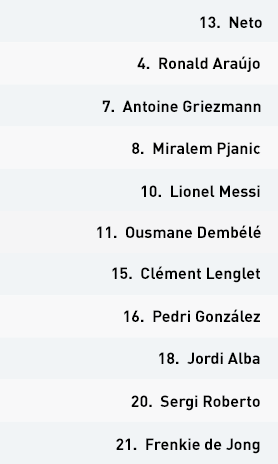 Andrea Pirlo set Juventus up in a 4-2-4 formation with Adrien Rabiot and Rodrigo Bentancur in midfield and Dejan Kulusevski, Paulo Dybala, Álvaro Morata and Federico Chiesa forming their attack. Barcelona used a 4-4-2 when out of possession.

Juve built play from the back, and Barça tried to prevent their opponents from making progress through central areas. Juve’s players sometimes took on a structure more akin to a 3-2-5, via Danilo tucking in from left-back to alongside their centre-backs and Juan Cuadrado pushing up high on the right, allowing Kulusevski to move infield so that Dybala could drop into deeper areas to receive possession.

Juve had a simple method to progress play – coupling diagonal passes with blindside movements. One example came when Leonardo Bonucci was on the ball in the left centre-back position; Dybala dropped to the left of Barça's centre midfielders. The eyes of Barça's midfielders were drawn towards the ball and they would also be preoccupied with what Bentancur and Rabiot were doing centrally, allowing Dybala to receive a diagonal pass. Another involved Juve working the ball back inside from Cuadrado on the right, and as the ball moved to Bentancur in a right-central position, Danilo advanced on the outside of Barça's wide midfielder in the hope of receiving a diagonal pass. Those movements were common throughout, and evident all over the pitch. There were even occasions when three or four Juve players adopted positions in a diagonal line, almost like a rugby team’s backs, aiming to move the ball along the path.


A major issue for Juve when building that way was the lack of movement and rotations they offered in the final third. Pirlo’s team had few problems progressing through the first two thirds of the pitch, but when it came to breaking the Barça's defensive line, their attackers were often static and their attack lost momentum, so the ball was then recycled.

Barça had two defensive strategies. Firstly, they implemented an aggressive, man-oriented press through which they sought to win the ball rather than just force mistakes by forcing Juve into wide areas. Their second was a mid-block with which they tried to restrict possession into Rabiot and Bentancur, and which involved Lionel Messi and Antoine Griezmann screening the central midfielders rather than pressing their centre-backs – although if they were close enough then they closed down Bonucci and Merih Demiral. Ronald Koeman's central midfielders Frenkie de Jong and Miralem Pjanic also remained close to Bentancur and Rabiot to create a four-man box around Juve’s central midfielders with which they would swarm the ball if a pass was played into midfield.

For all of Juve’s diagonal passing and blindside movements, the hosts had difficulty in advancing in behind, and struggled to create goalscoring opportunities, ending the game without a shot on target and a xG of just 0.29. They had three goals disallowed, but all three were correct offside decisions that resulted from Morata moving in behind too soon. The Spaniard tried to provide a threat with runs in behind Barça's defence, but he did not get the timing of his movements right.

In the second half Juve went slightly more direct and played more vertical passes. They still kept the ball on the ground, but they attempted to break lines with vertical passes in addition to the aforementioned diagonal passes. There were more rotations and third-man movements to try to access the spaces in behind, leading to better goalscoring chances, but still no goal.

Ronald Koeman organised Barcelona into a 4-2-3-1 formation in which Ousmane Dembélé, Lionel Messi and Pedri González supported Antoine Griezmann in attack. They encountered opponents using a flat 4-4-2 when out of possession.

Juventus set up with a mid-block that was designed to restrict access into Frenkie de Jong and Miralem Pjanic in central midfield, but Barça responded by moving two of their three attacking midfielders into central areas to create an overload. If Juve then moved their wide midfielders inside to restore numerical parity, Barça accessed the wide areas, with Jordi Alba and Sergi Roberto happy to push forward from full-back. If Juve maintained their flat midfield four to try to protect the width of the pitch, then Barça played through the middle of the pitch.


The presence of Barça’s additional central players for the visitors challenged Juve’s central midfielders Rodrigo Bentancur and Adrien Rabiot, and it was relatively easy for De Jong and Pjanic to receive, turn and advance. Furthermore, Messi moved freely, allowing Barça to create numerous overloads in different parts of the pitch.

In the second half Barça used a similar positional strategy to Juve when in possession, with Roberto remaining deep as part of a back three alongside De Jong – moved from central midfield at half-time – and Clément Lenglet, and Alba pushing up high on the left. Barça’s shape then became a 3-4-3, and the three in the first line against Juve’s front two made progression relatively simple.