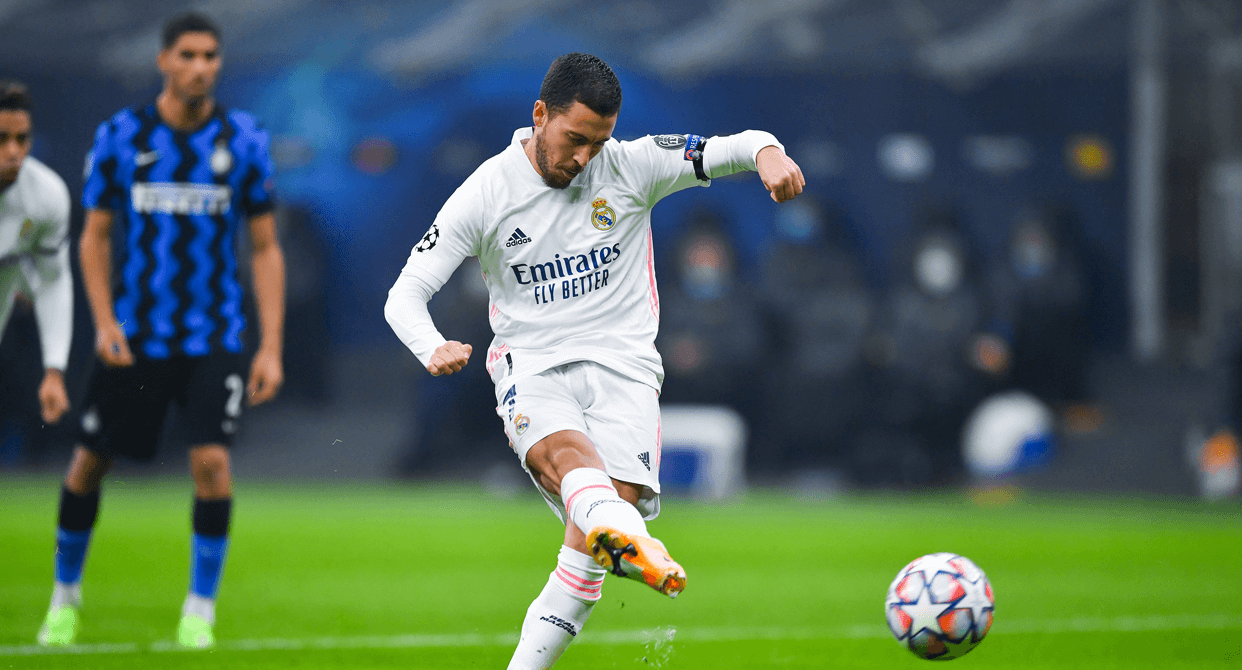 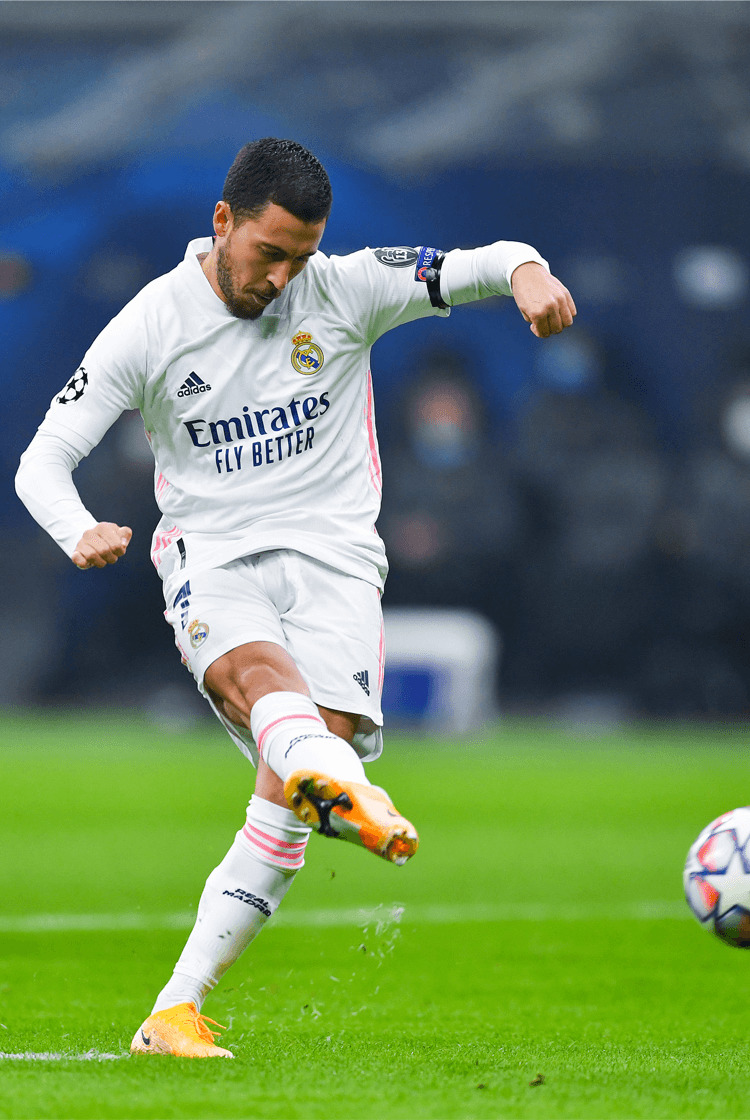 Inter Milan were left on the brink of elimination from the Champions League after losing at home to Real Madrid on an evening they also lost Arturo Vidal to a first-half red card. A potentially decisive evening started disappointingly for them when Eden Hazard gave Real the lead from the penalty spot in only the seventh minute; Vidal received his second yellow card in the 33rd minute, and having otherwise done well to prevent Real from scoring again, their defeat was confirmed when Achraf Hakimi scored an own goal in the 59th. Inter sit bottom of the competitive Group B with two points from four fixtures. “It was a great display," said Zinedine Zidane. "They were three crucial points. The team showed great spirit from beginning to end and never let their focus drop. We knew how important the game was." His opposite number, Antonio Conte, said: "It was an uphill battle from the get-go. We went behind and it was then difficult to get back into it, also because Vidal was sent off, something which knocked the wind out of us. Despite everything, the lads worked hard against a great side." 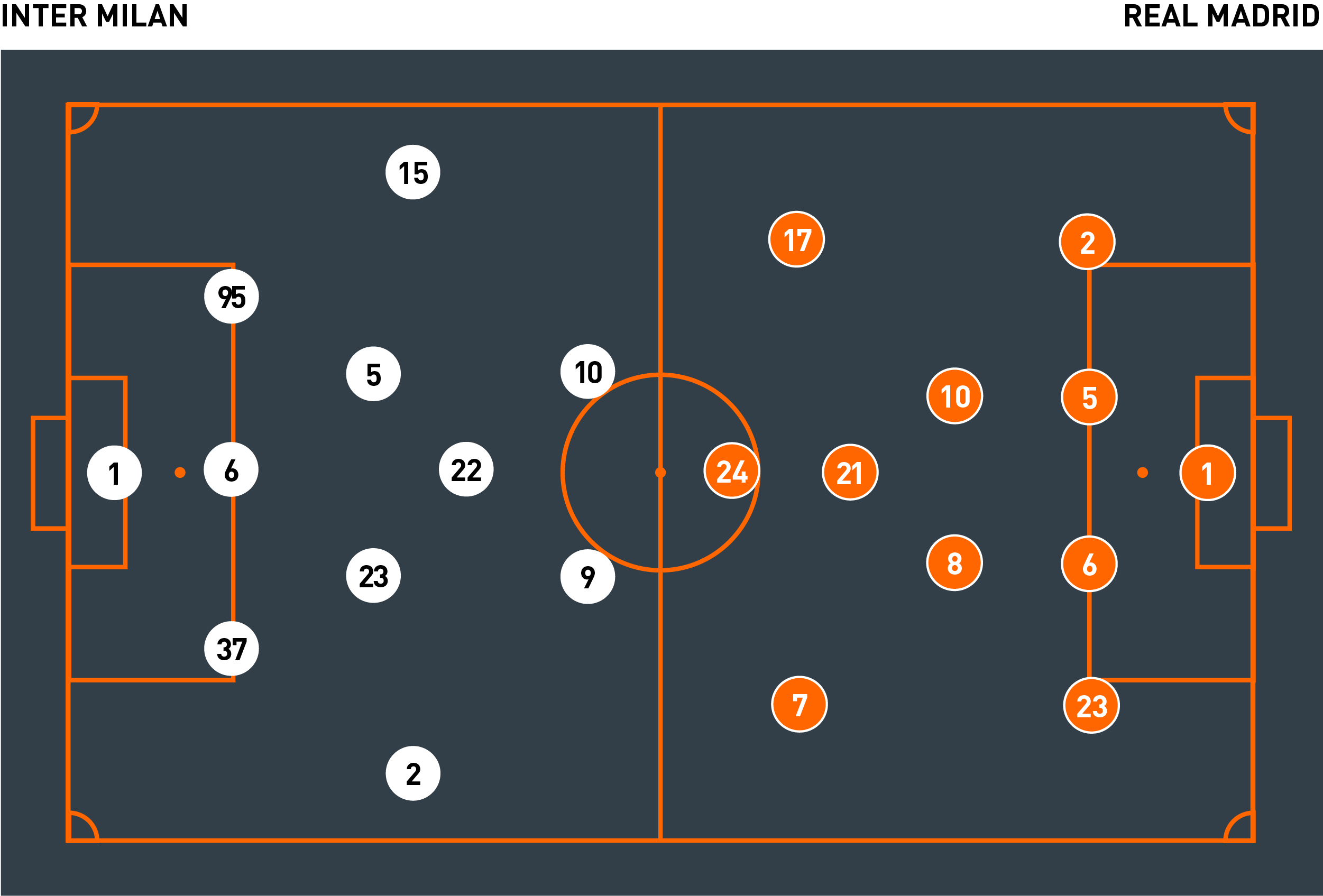 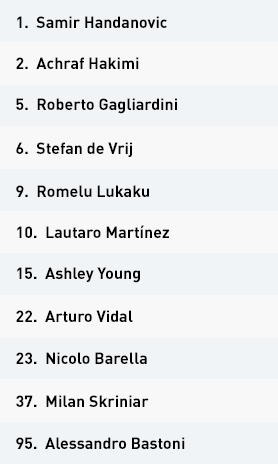 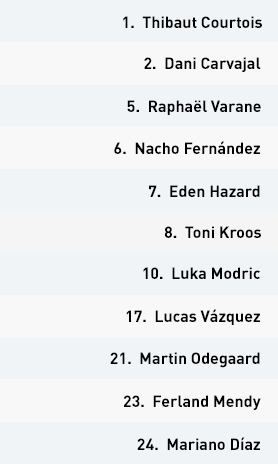 Inter Milan were organised by their manager Antonio Conte into his favoured 3-5-2 formation, which on this occasion was led by the front two of Romelu Lukaku and Lautaro Martínez. Their visitors, Real Madrid, defended with a 4-4-2, via Martin Odegaard advancing from midfield to alongside Mariano.

Conte's team sought to build from the back, and encountered opponents who operated with either a mid-block or a high press. Both teams' formations – during the periods Inter had possession – presented the hosts with a three-on-two overload in midfield, and it was that that Real attempted to nullify, via Odegaard and Mariano prioritising Arturo Vidal, and Toni Kroos and Luka Modric taking Nicolò Barella and Roberto Gagliardini, in turn somewhat freeing Inter's defence from pressure.

Real were content for Milan Skriniar or Alessandro Bastoni, Inter's wider central defenders, to receive possession, and when they did so Eden Hazard and Lucas Vázquez moved to press them; until then they retained narrow positions to remain compact with the central midfielders between them. When one moved, the three remaining midfielders took Inter's three central midfielders, their ball-side full-back would move to close down Inter's ball-side wing-back, and their three remaining defenders worked to remain compact.

That positioning made them difficult to play through, when Inter were already attempting to progress beyond Real's front two via switches of play between Skriniar and Bastoni, to encourage progress into the half-spaces and wide areas having drawn their opponents to one side of the pitch. But if they proved capable of beating the first, and often second, line of Real's shape, thereafter their options were limited; balls to the feet of Lukaku and Martínez, in the hope of combination play, came to little because of a lack of runs in behind, and therefore the absence of penetration.


An alternative approach involved direct passes to Lukaku, whose strike partner Martínez would make diagonal runs in behind while he competed aerially with the defender who had vacated the space Martínez was running into. A further tweak to their build-up came through Stefan de Vrij advancing to alongside Vidal to create a double pivot and maintain their desired overload in midfield, but their execution was again unsatisfactory, and meant that that overload wasn't taken advantage of.

After Vidal's red card they remained in a 5-3-1, through Martínez withdrawing into midfield, until half-time, when Danilo D’Ambrosio and Ivan Perisic were brought on and they reorganised to use a 4-2-3 led by Achraf Hakimi, Perisic and Lukaku, and with D'Ambrosio and Ashley Young at full-back. They continued to attempt to attack; balls into Lukaku were supported, creating the potential for combinations.

If their switch in formation represented their best chance of earning at least a point without being reckless, it also invited Real to press Inter with greater aggression. The hosts remained in contention, but continued to struggle to create quality goalscoring chances.

Real Madrid adopted the 4-2-3-1 formation that has so often been Zinedine Zidane's preference, and that on this occasion was led by Mariano. Inter Milan used a 5-3-2, through Achraf Hakimi and Ashley Young withdrawing from midfield and into defence.

Inter sought to press their visitors; Romelu Lukaku and Lautaro Martínez closed down their central defenders and, with their three central midfielders taking Real's, Real sought to test them by moving into positions intended to undermine their desired compactness. Toni Kroos, most commonly, withdrew into central defence, often when a full-back or wide midfielder also moved to draw their opposite number. Via Arturo Vidal moving to follow Kroos, Real were capable of finding the player Kroos' movements had freed up; if Vidal resisted doing so, a three-on-two existed against Inter's front two. Luka Modric and Martin Odegaard, similarly, adopted positions in wider areas, and Eden Hazard was given a level of freedom that meant him often moving far enough to offer an additional option on the far side of the pitch.

Antonio Conte's team attempted to adapt by passing on their defensive responsibilities as their opponents moved, but the frequency of those movements made doing so difficult, contributing to Real regularly feeding free players, often as a consequence of the overload that existed in midfield. Inter's priority was to protect the spaces behind their defence, and their wing-backs were therefore largely cautious.


Real also sought to progress beyond Inter's midfield by drawing the relevant three players to one side of the pitch before switching play to the relevant full-back. After Vidal's dismissal, they impressively managed possession, therefore ensuring that Inter struggled to build a sense of momentum or to dictate play, and that they instead adopted a 4-4-1.

The hosts sought to negate the underload they faced in midfield through their wide midfielders adopting narrower positions, and with two lines of four they were also capable of defending the wide areas with two players, reducing Real's potential there. Their back four was also largely preserved; for all of Real's effectiveness in their defensive and midfield thirds, they struggled to progress through the last line of Inter's defence, and required a set-piece before they could double their lead.