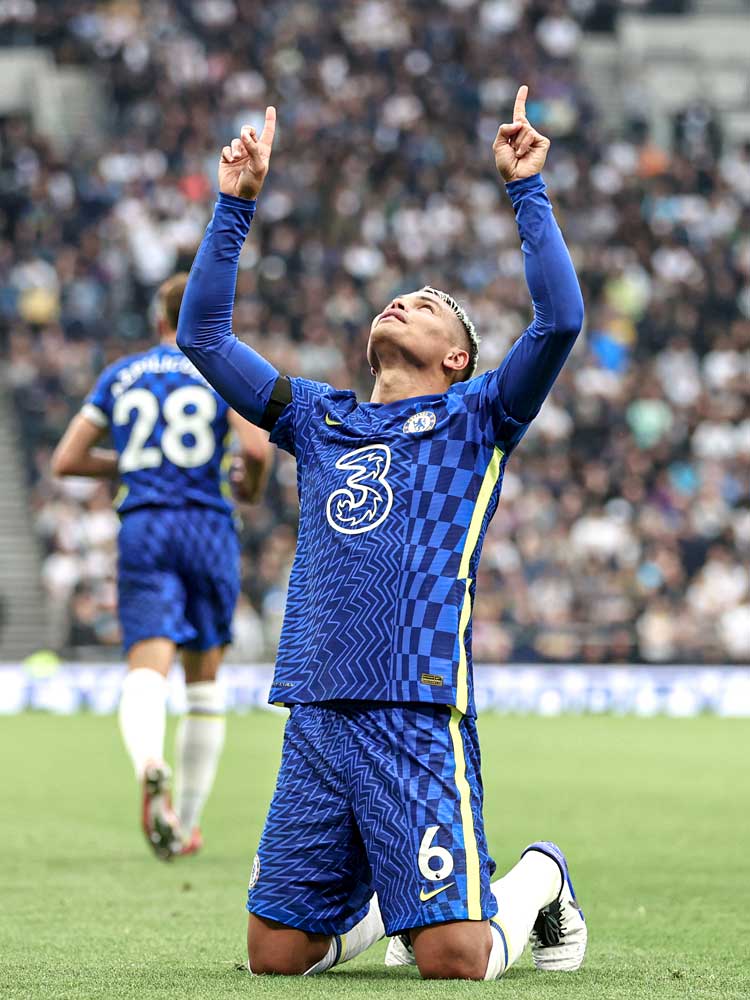 Chelsea ensured they ended the weekend top of the Premier League by easing past Tottenham on an occasion when both teams paid tribute to Jimmy Greaves, who died earlier at the age of 81. Greaves started his career at Chelsea before establishing himself as perhaps England's greatest ever goalscorer and also excelling for Spurs. Chelsea wasted opportunities to build a bigger lead than they ultimately secured through second-half goals from Thiago Silva, N'Golo Kanté and Antonio Rüdiger, as Tottenham struggled throughout the second half, largely because of Thomas Tuchel's introduction of Kanté at half-time. "We relied too much on skills, but it's not just about skilful play – we also have to impress with work rate and intensity and we had to step up to earn a better result," Tuchel said. "That is what we did, we played a better second half." His opposite number, Nuno Espírito Santo, said: "The second half, the set-piece and goal changes the game. Then it becomes much harder; the game totally changed and Chelsea took control and were the better team in the second half."

Tottenham were organised by their manager Nuno Espírito Santo into a 4-3-3 formation led by the narrowly positioned front three of Giovani Lo Celso, Son Heung-min and Harry Kane. Their visitors, Chelsea, defended with a 5-2-3.

Spurs' attacking width was provided by their full-backs Emerson Royal and Sergio Reguilón; against them and the energy with which Spurs started, Chelsea's wing-backs withdrew into their defensive line to form a back five. Son, who remained in a central position when Spurs defended, became their leading target when they sought to counter – particularly when regains were made in the attacking half. Supported by Kane and Lo Celso, his pace posed a threat against Thiago Silva.

During periods of more sustained possession, Spurs' full-backs advanced – their midfield three built patiently to provide time for their full-backs to advance – Kane withdrew into the left inside channel, and Lo Celso moved infield from the right. Chelsea pressed from their 5-2-3 via Kai Havertz and Romelu Lukaku taking Spurs' two central defenders, and Mason Mount their deepest positioned midfielder. If Spurs adopted a double pivot, Mateo Kovacic would then advance to suport Mount, and Jorginho would remain withdrawn to offer cover. Both of Chelsea's wing-backs, regardless, took their opposing full-backs, and their back three prioritised Spurs' front three. On the occasions Chelsea were defending from inside their own half, they did so with a 5-2-3 and a mid-block, via Mount advancing to alongside Lukaku and Havertz.

Spurs posed their greatest attacking threat via runs from a third man when they played into Son and he quickly bounced possession into an overlapping full-back – usually Reguilón, as Kane withdrew – or a narrow run from central midfield when Son drifted towards the left. By Lo Celso withdrawing to draw Antonio Rüdiger, and Kane moving to take Andreas Christensen with him, combinations stretched the two central defenders and contributed to Spurs progressing through the inside channel. Only an accurate final ball undermined them.

For the second half, for which N'Golo Kanté was introduced, Chelsea defended with a 5-3-2. Kanté and Kovacic covered in wide territory, prioritising Spurs' full-backs, and their narrow front two worked to negate Hojbjerg, ultimately forcing play wide, where Chelsea worked to trap their opponents via a combination of a central midfielder and wing-back. When Hojbjerg was therefore forced into deeper territory, a three-on-two existed in central midfield, giving Kanté and Kovacic increased freedom to press wide.

The hosts' front three was therefore forced to move deeper to receive where once Hojbjerg would have, reducing their attacking presence and, with Chelsea's midfield covering the wide areas of the pitch, they had the numbers in defence for a defender to follow them without sacrificing their defensive security. Switches of play and patient passes across the pitch gave Spurs an alternative means of progressing possession; Kane's willingness to drop and link also proved relatively effective when Son moved infield from the left, but against Chelsea's compact mid-block they continued to struggle to create.

Thomas Tuchel set Chelsea up into a 3-4-2-1 formation led by Romelu Lukaku. Their hosts, Tottenham, defended with a 4-3-3.

Spurs' front three pressed Chelsea's three central defenders; Harry Kane did so from the left, Son Heung-min through the centre, and Giovani Lo Celso from the right. Tanguy Ndombele and Dele Alli respectively took Mateo Kovacic and Mason Mount, and Pierre-Emile Hojbjerg remained central, but braced to move to take Jorginho when he moved away from the partial cover offered by Son.

Chelsea's wing-backs advanced to provide their attacking width. Lukaku drifted across to occupy Eric Dier, so Cristian Romero had to advance to take Kai Havertz, who regularly adopted positions beyond Spurs' midfield three to capitalise on the space created by Ndombele pressing Kovacic and was therefore close enough to Lukaku to support direct passes into him and to provide a secondary passing outlet over Spurs' high press.

When Tuchel's team advanced into the attacking half, Havertz remained close to Lukaku and Mount remained slightly withdrawn to connect with their attacking line from the right inside channel; Kovacic performed similarly towards the left, and Jorginho remained central. Havertz also sought to move across and through the spaces between the lines, and between Spurs' central defenders.

N'Golo Kanté replacing Mount for the second half meant Chelsea attacking with a 3-5-2, and their wing-backs adopting more advanced starting positions to keep Spurs' full-backs in deeper territory. With Havertz joining Lukaku to form a front two, their midfield three supported attempts to build play; Kanté and Kovacic also occasionally moved wide to draw their opponents with them.

Increased access to Jorginho – Hojbjerg couldn't always advance to take him – at the base of Chelsea's midfield and their front two helped them to build through or around the first two lines in Spurs' structure. Rotations towards the left between Marcos Alonso and Havertz contributed to that.

When Timo Werner later replaced Havertz in their front two Chelsea offered an increased threat in behind during moments of transition, particularly given their willingness to withdraw into a mid-block. It was that mid-block that contributed to Spurs building forwards and risking leaving space in behind them to counter into, which Chelsea also capitalised on.