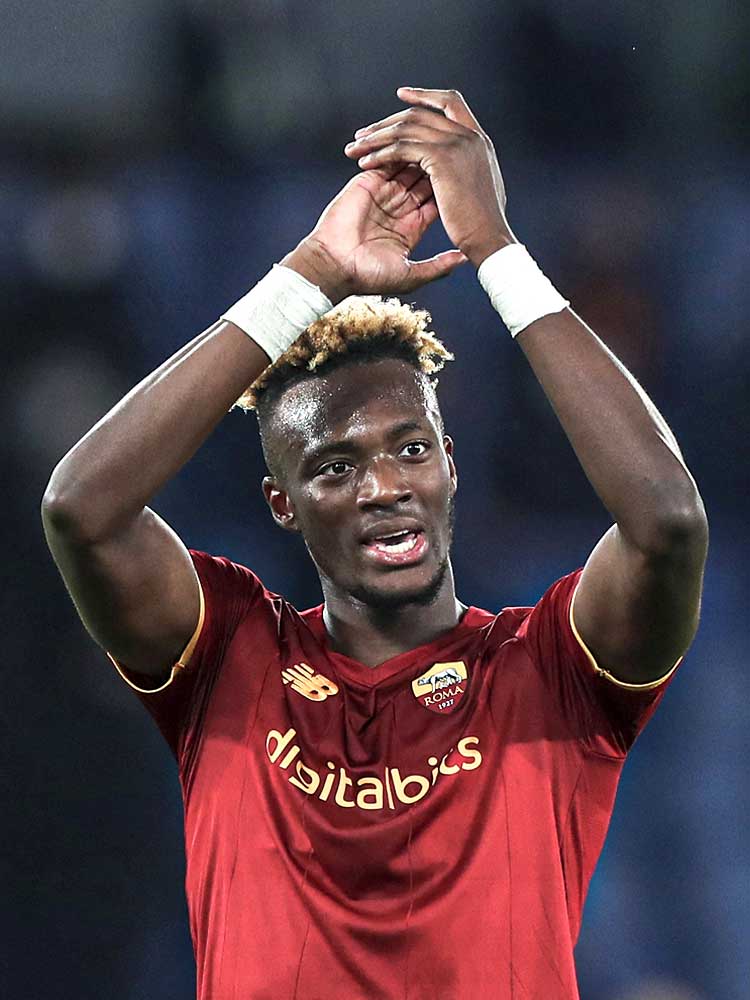 Profile
In joining José Mourinho at Roma for a fee of £34m, Tammy Abraham followed Fikayo Tomori by moving to Serie A to further his career away from Chelsea. Aged 23 when he signed a five-year contract in August 2021, there is the potential for a return to Chelsea in future, with a buy-back clause of £68m written into the deal.

It was Romelu Lukaku's move back to Stamford Bridge, seven years after he was sold to Everton, that nudged Abraham towards the exit door. "Tammy will always be welcomed back at Stamford Bridge as one of our own," said Chelsea's influential director Marina Granovskaia.

Tactical analysis
Abraham makes a variety of movements to aid his team's attacks. His main threat is targeting the space in behind an opposing defence to chase through balls. Direct, penetrative and clever runs lead to regular goalscoring chances, though his finishing when one on one still needs to improve.

Abraham tends to score most of his goals from instinctive efforts, either inside or near the penalty area, and he excels when he has limited time and space. He has an impressive eye for goal, and he adapts his body shape and the type of finish he uses to get his shot off early and give himself the best possible chance of scoring.

He can therefore score when there are players between him and goal, and will capitalise on a goalkeeper being unsighted (above). His height and aerial ability also offers teammates an alternative route to finding him in the area.

In a crowded penalty area, he can shift the ball away from a defender, and doing so can create an angle for him to shoot. He also has good enough close control and strength to hold off an opponent when he has his back to goal, before attempting to roll them and shoot.

Further from goal, Abraham is far more limited. He is good playing off one touch, and can set a pass to a teammate (below), but he struggles when he needs to take several touches while under pressure.

His ability close to goal ultimately compensates for any deficiencies when in deeper positions, though. However, if he is to compete to be England's starting striker, his overall game will need to improve. Like Harry Kane, the world's best strikers have a better all-round game than Abraham currently does.

Role at Roma
Throughout his time in the Italian capital, Abraham has either played as the lone striker in Roma's 4-2-3-1 (below), or as one of two up front in a 3-5-2. In the former shape he is supported by a fluid, attacking trio – their wide forwards attack infield to encourage their full-backs to overlap. Abraham will operate on the last shoulder of the opposition's defensive line. Doing so creates more opportunities for him to get in behind, or simply force the opposition's central defenders back and create space for the attacking midfielders to operate in.

When he is the lone striker, Abraham is the main target of crosses delivered by Roma's advancing full-backs. Meanwhile, unless the three attacking midfielders are all in central positions, he will also link play by withdrawing into deeper positions.

The 3-5-2 shape (below) encourage him to drift across the pitch and draw his marker out of position. The opposition's remaining defenders will then narrow to close the gap left by the centre-back following Abraham. This will then create more space for the wing-backs to attack into.

Rick Karsdorp particularly benefits from this movement on the right, and he regularly delivers crosses. Abraham has had some success from crosses in Serie A, using his  intelligent movement and height to get on the end of balls into the box.

In the 3-5-2, he receives direct passes from Roma's defenders more often. When this happens, Abraham will look to find one of Roma's attacking central midfielders who has made a forward run. After doing so, he is likely to spin and sprint into a central attacking position to threaten goal and attack crosses.

Abraham has also benefitted from the central midfielders' forward runs. When those runs are tracked by a central defender, Abraham will look to exploit the space they have vacated.

Nicolò Zaniolo, Lorenzo Pellegrini and Henrikh Mkhitaryan are the likeliest starters behind Abraham in the 4-2-3-1 and as attacking midfielders in their 3-5-2. Each is effective when timing a forward run and looking to get on the ball between the lines. Abraham has proved capable of combining with those players and making runs that help each other find space.

Abraham had needed a chance away from Chelsea to reignite his career and it seems Roma may be just the place for him. Time will tell if he can fulfil the potential he showed under Frank Lampard in London.