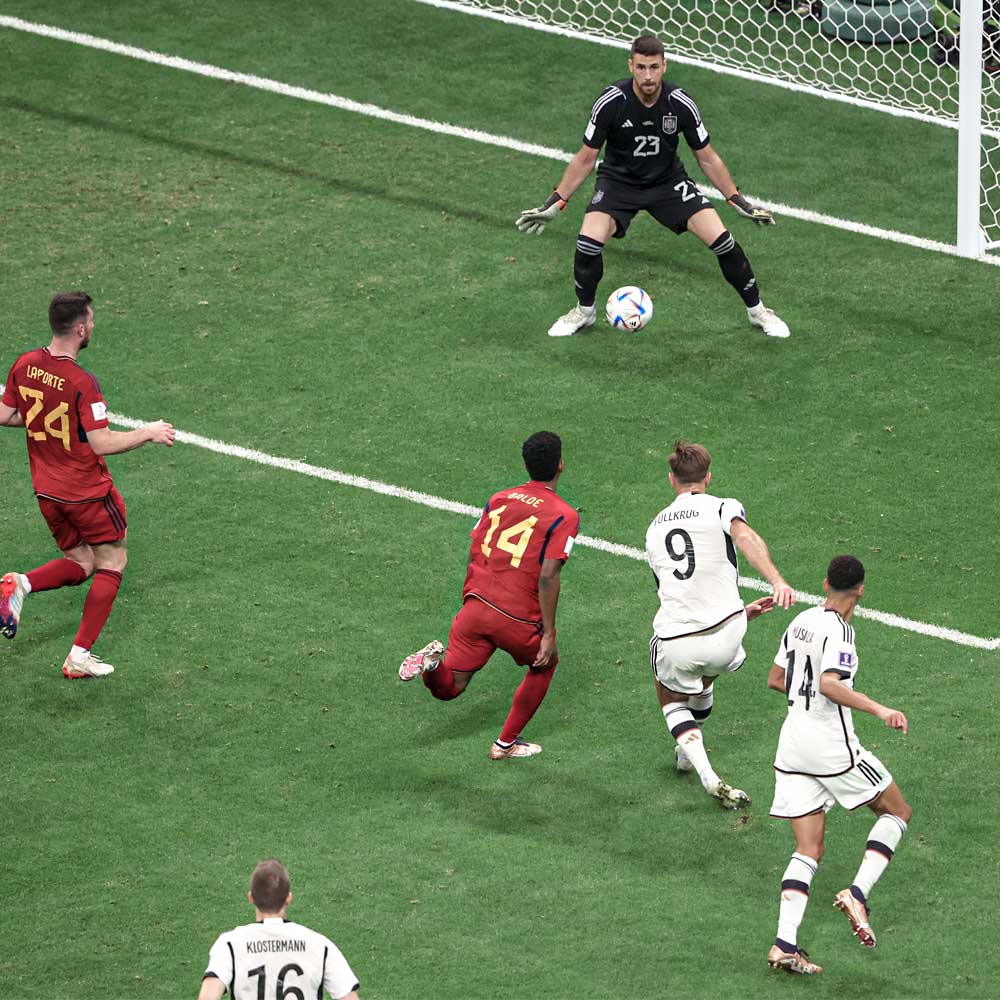 The 2010 and 2014 world champions played out a draw that will just about suit both teams as they head into their final World Cup group-stage games this week. Germany could really have done with a win after their shock defeat to Japan in their opening match, but after Álvaro Morata put Spain ahead on the hour mark, Hansi Flick's side were in danger of losing a second game and giving themselves a huge task if they were to make it out of Group E. Instead, Niclas Füllkrug's equaliser earned a point that means Germany are now likely to qualify with a win over Costa Rica as long as Spain do not lose to Japan. Given what Germany were facing after 80 minutes of this game, the draw will give the team an important morale boost.

“Things start to develop when you start to win," said Flick. "So maybe this will give us a boost to give us the self-confidence to score goals. We know that this was just the first step. In the next match against Costa Rica, we want to create the conditions so that we can go through to the round of 16.”

Spain used a 4-3-3 structure and built play patiently from the back, despite Germany pressing aggressively from their 4-2-3-1. Luis Enrique's team moved the ball around the back line to isolate Thomas Müller, before a centre-back stepped out with the ball into midfield (below). This helped free up Sergio Busquets, who dropped slightly to create a new angle to receive before looking to connect into the front three or a number eight. Dani Olmo moved inside to receive between the lines, as Spain’s young and energetic number eights occupied the inside channels. Olmo hit the bar from the edge of the area after moving inside to receive, as he fired Germany an early warning.

With Germany’s adapted press limiting Spain’s deep build-up, Pedri dropped out of midfield to the left side and Jordi Alba pushed up higher. Olmo continued to move inside and centre-forward Marco Asensio dropped deep, in the process pulling Niklas Süle well out of his position in Germany’s back line. This helped Spain to build out from the back and get around Germany’s increasingly effective high press. Further forward, more space opened up for Spain to work the ball through or around Germany’s remaining three defenders. Purposeful forward runs from wide forwards Olmo and Ferran Torres proved threatening (below).

In the second half, Germany continued to press aggressively, and Asensio proved key to Spain’s progress by dropping towards the ball. He moved into the space behind Germany’s double pivot, who tightly marked Spain’s number eights, Gavi and Pedri, to limit the chances of the two talented youngsters receiving and playing forward (below). However, with Asensio adapting his movements and finding pockets of space between the lines, Spain were able to break through Germany’s press with vertical balls into the Real Madrid man. He was also helped by wingers Olmo and Torres pinning the German full-backs with their high and wide positioning. The other advantage of this was that the wide players were available to receive a switch of play if Spain needed to change the point of attack quickly.

Álvaro Morata was introduced up front for Spain early in the second half. As a more natural centre-forward, he could drop short to link like Asensio but also threatened Germany in behind. Left-back Alba pushed forward much earlier than Dani Carvajal on the right, with Pedri happy to drop in and cover for him, while Gavi was more advanced on the right, ready to overlap around the right midfielder (below). Morata gave Spain more presence inside the penalty area, and he opened the scoring with a neat finish from an Alba cross. Spain’s left side still was the more threatening throughout the game.

Germany were set up in a 4-2-3-1 shape by manager Hansi Flick. They initially posed a threat on the break, with Ilkay Gündogan dropping to link play with the midfield runners. Once they managed to established spells of possession, Gündogan again dropped away from his number 10 slot, rotating with Leon Goretzka to maintain the double pivot ahead of the back four (below). Left-back David Raum advanced, and Serge Gnabry held the width on the right side (below). Thomas Müller was the highest central attacker, though he was rarely able to affect the space in behind Spain’s high line. Jamal Musiala moved inside early from the left to act as another central passing option, with Germany attempting to overload Spain's midfield three. When the middle of the pitch was too congested, Germany looked over the top for Raum’s forward runs from left-back.

High press on the left

Germany pressed high. Musiala jumped out to Spain centre-back Rodri, and in doing so formed a front line of two with Müller. This allowed Müller to focus on Aymeric Laporte and try to limit the Spain centre-back's opportunities to step into midfield with the ball (below). Raum was then forced to leave the back line, pushing very high to press Dani Carvajal on Germany’s left, while they went man for man in central midfield. This meant Germany stopped Spain’s best passing route out from the back, but it also led to some high turnovers and chances. That said, in the rare moments when Germany didn’t win the ball and Spain broke the press, Spain then had much bigger gaps through which they could penetrate Germany’s structure. With Raum consistently high to support the press on the left, there was plenty of space for Spain to exploit.

In the second half, Germany went more attacking by pushing both full-backs forward, while the double pivot provided cover underneath the attacks (below). Both wide midfielders moved inside, with Musiala often drawing several Spanish players towards the ball with his dribbles inside off the flank. Gnabry provided a similar attacking threat by moving inside from the right with runs both on and off the ball, while Gündogan remained as the main central link between the two wide players.

However, Germany still lacked a threat in behind the Spain defence, with Müller most effective when operating between the lines. As a result, Spain’s defence could be bold with their high line, and individuals could press into midfield to create local overloads around the ball. This meant Germany’s creative players struggled for time and space and could not consistently get the ball under control between the lines.

Gnabry was moved to the left after Leroy Sané was introduced on the right, with Musiala moved to the number 10 position. Niclas Füllkrug was introduced as a more traditional number nine, and he was able to pin the Spanish centre-backs far better than Müller had before. Sané linked well with Musiala in central areas, and Goretzka pushed forward from the double pivot to provide even more of a central threat (below). This led to a big chance for Musiala that Unai Simón saved, before Füllkrug smashed home an equaliser following an almost identical set of movements from the players on Germany’s right. The equalising goal could prove huge if Germany are to have any hope of making it out of this group.