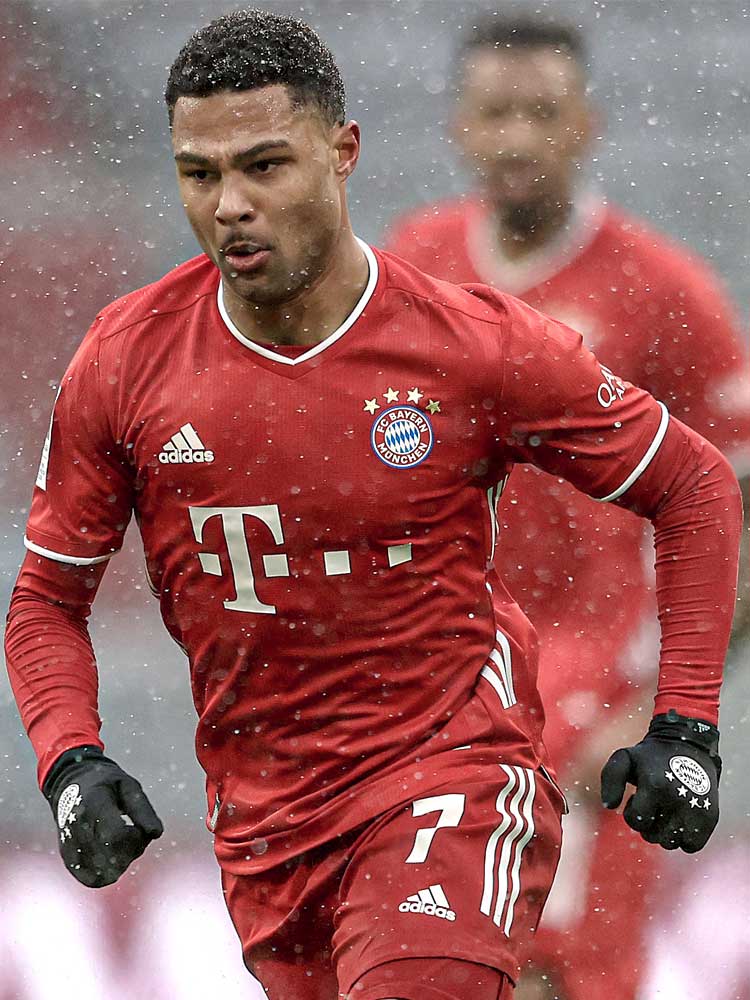 Profile
Serge Gnabry's four goals in Bayern Munich's 7-2 victory at Tottenham was perhaps only the catalyst for his reputation growing to the point he is considered one of Europe's leading wide forwards. As consistent a figure for Bayern as he is with Germany, perhaps even the Arsenal supporters most relishing those goals against their rivals would have done so with a sense of regret. Aged 21, in 2016 he was allowed to leave their club for Werder Bremen for only £4.25m, and having spent much of the previous season barely featuring while on loan at West Brom; once, Arsenal would have been considered the perfect environment for his undoubted potential.

It took only a year at Bremen for Bayern to be sufficiently impressed that they paid a similarly inexpensive £7m to sign him permanently, before loaning him to Hoffenheim to work under the respected Julian Nagelsmann for the following campaign. He returned for 2018/19 – a season Bayern often found difficult as they underwent a transition – and impressed to such an extent as they won the Bundesliga, DFB Cup and German Supercup that his six assists and 13 goals in 42 appearances meant he was voted the supporters' player of the season. That Nagelsmann has since joined him at Bayern also means that he is expected to continue to impress.

Tactical analysis
Gnabry has proven an extremely versatile attacking player, owing to his ability to use both feet and to be effective in a variety of attacking situations. If his stronger foot is his right, he can also accurately and powerfully shoot with his left (below). His first touch away from pressure creates the best positions from which to shoot, when he can then finish accurately, often into the corners of a goal.

His single-mindedness when attacking in central areas is regardless a weakness and a strength. His desire to score can lead to him overlooking teammates who may be better positioned but, because of his ability to finish with both feet, there are times when he is justified in doing so. If his goals return continues to improve – and he often seeks to shoot as early as possible – he may even establish himself among the finest in the world.

Gnabry is both fast and strong. He can surge past opponents when one-on-one, and he can also hold and protect possession away from physical defenders before using his power to aggressively turn and potentially shoot on goal, but he continues to struggle aerially, often losing out and therefore failing to secure possession for those attempting to support him.

It is during transitions that he is perhaps improving most. His positive movements create spaces for the ball carrier or for him to receive beyond the final line of pressure (below), and his sense of timing and changes of direction during forward runs make him difficult to track. While counter-attacking he is also less selfish, and more aware of when to combine with teammates.

Role at Bayern Munich
Throughout his time at Bayern, Gnabry has been used in multiple attacking positions, often in support of the prolific Robert Lewandowski. He impressively supports a lone striker – Lewandowski’s position in Bayern’s 4-2-3-1 – when his desire to attack through inside channels draws defenders from that striker, or when he moves into spaces if defenders remain with the most advanced attacker.

Arjen Robben once excelled at Bayern with a similar role, and though he sought to drive infield from a much wider starting position, Gnabry can be similarly assertive when in possession; because of his ability to play with both feet, he can also be used as effectively from the left as he can from the right, and around Lewandowski. In either role his low crosses delivered to in front of goal (below), cut-backs, and powerful efforts across goal towards the far corners make him a consistent threat.

He also complements overlapping full-backs, and in Joshua Kimmich, Benjamin Pavard, Alphonso Davies and Lucas Hernández, Bayern possess some of Europe’s finest. With Gnabry often carrying possession diagonally into the inside channel, space is created for the relevant full-back to advance and provide quality deliveries or incisive forward passes from wider positions. In their 4-2-3-1 Gnabry is also increasingly linking with the other wide forward after moving infield with possession.

The presence of a number 10 – usually the classy Thomas Müller – around their lone striker creates a space between those two wide forwards. With Bayern capable of changing the speed of their attack, and opposing defences attempting to retain numbers in central areas, spaces open up in wider areas for switches across to, most commonly, Kingsley Coman or Leroy Sané  to attack from the opposite wing (above).