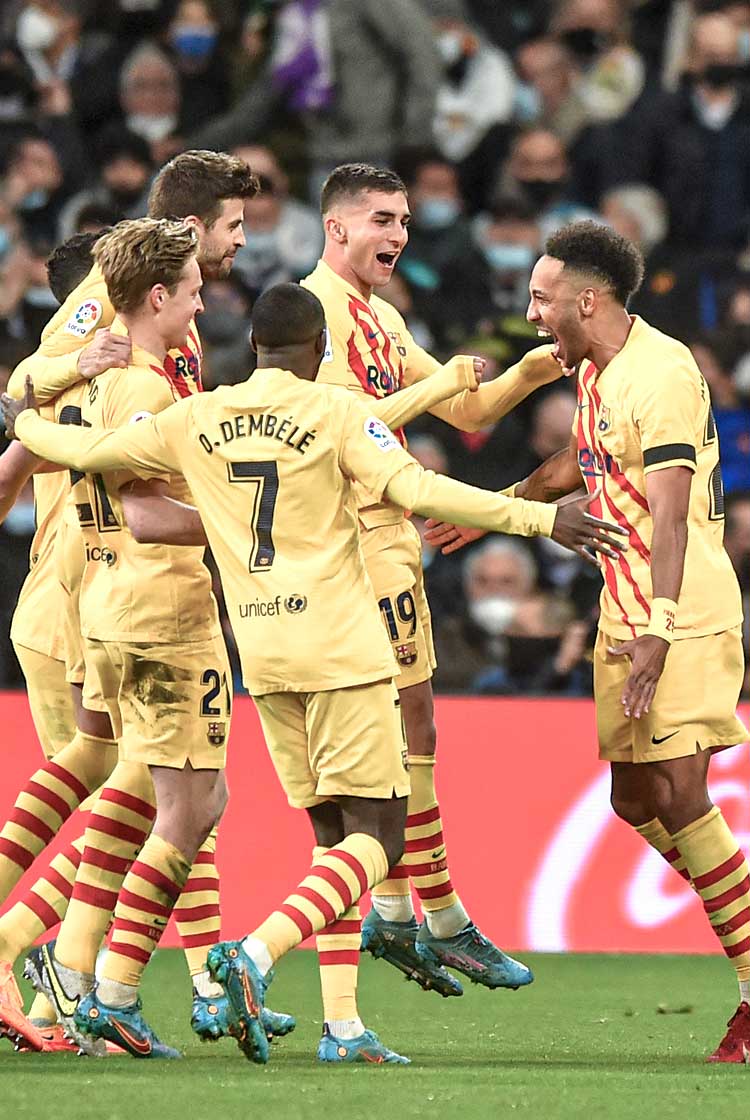 In what might have been the most inconsequential Clásico in modern times, given Real Madrid's lead at the top of La Liga, Barcelona sent a statement to their greatest rivals with a resounding 4-0 win at the Bernabéu. Real had already built up a nine-point lead at the top of the table with just 10 games of the season left going into this match. Barcelona, meanwhile, were fourth and far from certain of Champions League qualification, but Pierre-Emerick Aubameyang starred as they secured a memorable win. Although the title race for 2021/22 is still more than likely over, the manner of this win away to Real will have given Xavi and his team the belief that their post-Lionel Messi rebuild will eventually bring results, and a return to past glories.

“It reminded [me] of the 1-2 of 2004 a little, but there is work to be done,” Xavi said. “This is not a trophy. We have to work with solidarity. There’s a long way to go. We still have goals of the season to achieve. We have to continue.”

Real Madrid used a 4-4-2 shape when in possession, and came up against a Barcelona team set up in a 4-4-2 defensive shape. With no recognised centre-forward, Carlo Ancelotti set Real up with a box central midfield during build-up, with Luka Modric and Federico Valverde as two number 10s between the lines (below). Wingers Rodrygo and Vinícius Júnior held the team’s width, attacking around and beyond Barcelona’s full-backs. Rodrygo drifted inside from the right to add an extra body close to Madrid’s 10s; Vinícius stayed wider for longer, looking to receive near the touchline and then cut back inside with the ball.

Back three to build

Madrid converted into a temporary back three to build, with Nacho taking up a reserved position from left-back, allowing Vinícius to isolate his opponent for as long as possible. On the right, Rodrygo moved into a narrow position and Dani Carvajal pushed forward to provide the width (below). Although Madrid progressed around Barcelona’s block consistently on the right, Vinícius was often too isolated on the left. Their midfield four rotated in an attempt to pull Barcelona’s central players out of shape. However, Barcelona’s front two screened central access into Madrid’s double pivot effectively, which meant it was difficult to find their number 10s. Play was repeatedly forced around the outside, as Real struggled to get the ball between the lines.

Two goals down at half-time, Real changed to a 4-3-3 for the second half, with David Alaba moving to left-back and supporting inside Vinícius with aggressive forward runs. Eduardo Camavinga came on in a central midfield three to overload Barcelona’s two. He dropped into the back line to allow Alaba to push forward earlier, pinning Ousmane Dembélé back deeper (below). Mariano also came on at centre-forward, with Nacho moved to right-back to support Rodrygo. Nacho again failed to offer much attacking potential, with Madrid’s play predictable on his side of the pitch. Despite the formation change, the hosts conceded a third goal moments after the restart. The game was effectively lost at that point.

Once the game was over as a contest and Barcelona dropped back to protect their lead, Madrid had more comfortable possession. They used diagonals to find Lucas Vázquez and Vinícius, who provided their width (below), while Alaba and Marco Asensio moved infield to get close to Mariano. The midfield three of Modric, Camavinga and Valverde guarded against counter-attacks through Barcelona’s wingers, who had earlier caused plenty of problems.

Barcelona were set up in a 4-3-3 in possession, and they came up against a Madrid team in a 4-4-2 defensive block. Jordi Alba pushed forward from left-back, with Ferran Torres moving inside to support centre-forward Pierre-Emerick Aubameyang (below). Number eights Frenkie de Jong and Pedri widened to support through the inside channels, with Sergio Busquets left as the single pivot ahead of the two centre-backs. Xavi used a more conservative right-back in Ronald Araújo, who held his position to guard against Madrid’s best counter-attacking threat in Vinícius. Ousmane Dembélé operated slightly wider on the right side, before cutting in to combine or shoot – or working around the outside of Madrid left-back Nacho to cross, as he did for Barcelona’s first goal.

As the first half progressed, Barcelona quickly recognised they didn’t need to focus on wide build-up play, and could easily play through the centre of the pitch. With the home side using a 4-4-2 to defend, Barcelona had a three-on-two overload in central midfield, with a free man always available. Busquets dropped into defence to draw one of Madrid’s central midfielders up, and Pedri drifted wider to drag the other out. This often left De Jong as the free man to receive in the inside channel when Barcelona’s back line could access him (below). With Madrid’s full-backs and wingers marking their direct opponent, Aubameyang's movement out to Madrid's left centre-back Alaba proved crucial. This stopped Alaba from jumping out to press, again leaving De Jong free.

Width in the front line

With Madrid using a 4-3-3 in the second half, Barcelona no longer had a central midfield overload. Aubameyang also found himself underloaded against Madrid’s two centre-backs, and his team were not able to progress centrally as they were in the first half. However, the extremely high and wide positioning of their wingers, Dembélé and Torres, created significant gaps in Madrid’s back line, especially when their full-backs decided to mark the opponents tightly. Passes over and around then exploited these gaps, with Torres particularly effective when running beyond Nacho (below), who had switched to right-back. Gerard Piqué’s accurate long passing from right centre-back was hugely effective, and led to the visitors’ fourth goal.

To access the wingers’ movements beyond the Madrid defence, Aubameyang dropped in to connect with the midfield (below). As Busquets, De Jong and Pedri were still man-marked, they could only receive to play forward as part of a third-man combination. So, Aubameyang would only drop to combine once one of those three – usually Pedri – had moved out of midfield. Aubameyang’s movement dragged one of the hosts’ centre-backs out of the back line, and the Barcelona winger on that side could then bend their run inwards and look to penetrate in behind. Torres’ movements were particularly effective, especially as Pedri often moved out to the left.