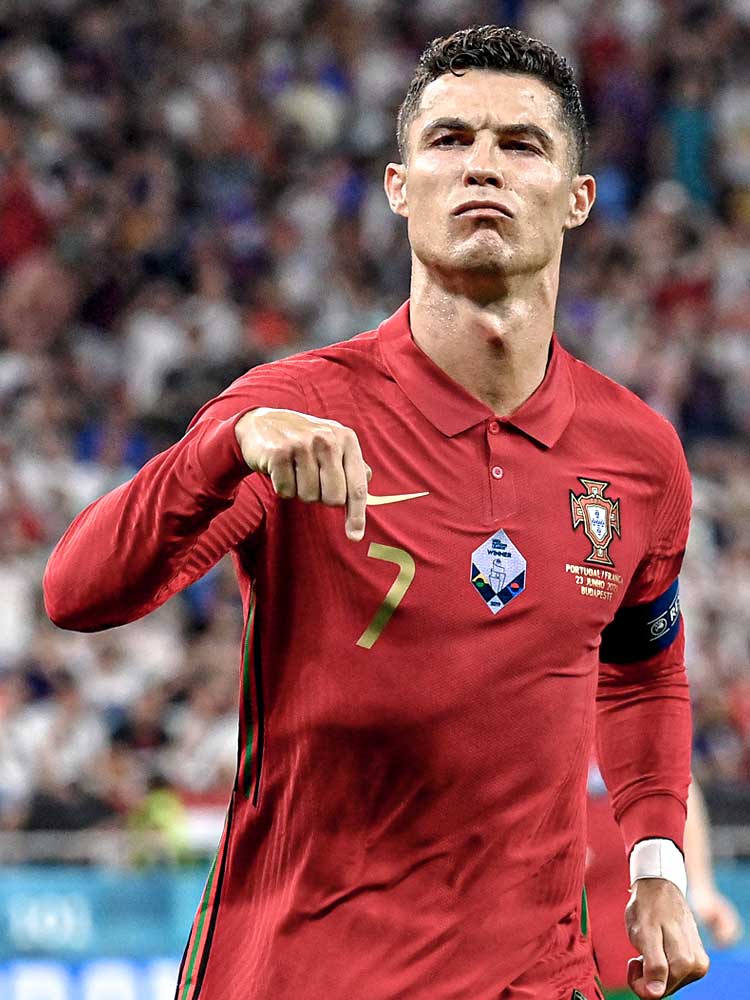 Reigning European champions Portugal progressed to the knockout stages of Euro 2020 after recovering from a losing position against world champions France. Cristiano Ronaldo twice scored from the penalty spot, to first give them the lead and then secure a point, and in doing so also equalled Iranian Ali Daei's record of 109 goals in international football. In between Ronaldo's two goals, his former Real Madrid teammate Karim Benzema also scored twice, doing so first time around from the penalty spot. Each of his goals, incidentally, was recorded at 46 minutes and 44 seconds, having been separated by the half-time interval. "It was an insane match that went in all directions," said France's manager Didier Deschamps. "I am really satisfied." His opposite number, Fernando Santos, said: "We want to recuperate the players and have them fresh for the next match. We have to eliminate the fatigue."

Portugal manager Fernando Santos organised his team into a 4-3-3 formation built on the midfield three provided by Danilo, João Moutinho and Renato Sanches. Their opponents, France, defended with a 4-4-2, via Antoine Griezmann advancing to alongside Karim Benzema.

In their earlier attempts to build possession, Sanches withdrew into the left inside channel to contribute to the three-on-two that existed in midfield; against France's mid-block their efforts  remained patient, and when possible involved both full-backs advancing. Griezmann adapted to adopt a more withdrawn position to challenge that overload, so Sanches and João Moutinho responded by both moving deeper.

Bernardo Silva retained his wide position on the right even when Nélson Semedo advanced from right-back – Moutinho provided defensive cover from behind them – contributing to the close combinations that unfolded there and the space behind Presnel Kimpembe that Cristiano Ronaldo had to make direct runs into.  Towards the left Raphaël Guerreiro offered overlaps, Diogo Jota moved infield, and Ronaldo withdrew to deeper territory. Jota struggled to exert an influence from there, however, because France aggressively pressed from their mid-block to that side of the pitch – Griezmann and Paul Pogba both contributed to doing so around Koundé and Corentin Tolisso – so switches of play to the right quickly took possession away from that pressure.

Hugo Lloris conceding a penalty at a routine set-piece delivery presented Ronaldo with the chance to give his team the lead from the penalty spot, and Portugal attempted to build on that by continuing to attack towards the right, where they offered their greatest potential. Moutinho and Semedo alternated in offering support to Silva, who targeted playing crosses and balls in behind for Ronaldo and, potentially, Jota.

When France recovered to take the lead, they dropped into a deep defensive block that encouraged both of Portugal's full-backs to advance further to where Jota continued to rotate with Ronaldo and Silva remained wide on the right. Sanches and Moutinho, as a consequence, moved wider to continue to cover from behind them.

On the occassions Ronaldo drifted towards the left, Jules Koundé became stretched; he succeeded in winning, and scoring, their second penalty. An injury to Lucas Digne meant that Adrien Rabiot was required to deputise out of position at left-back, so Portugal continued to attempt to isolate France's full-backs and to attack them one-on-one, particularly via direct dribbles following switches of play.

When Bruno Fernandes and Rúben Neves were introduced as substitutes, their potential via dribbling was reduced, but against France's mid-block their control of midfield was increased. With a draw enough to take them into the knockout stages, that control was essential in them managing momentum and avoiding defeat.

Didier Deschamps set France up into a 4-2-3-1 formation led by Karim Benzema. Their opponents, Portugal, defended with a 4-1-4-1 via Diogo Jota and Bernardo Silva withdrawing into midfield.

Portugal's defensive block was drawn by the ball; towards the right, Corentin Tolisso connected with Paul Pogba and Antoine Griezmann drifted into the right inside channel, so Kylian Mbappé held his width towards the left, where he was targeted by direct passes and switches of play. Those towards the right adapted slightly whenever Benzema or Griezmann adopted deeper positions; Tolisso moved wider to stretch Raphaël Guerreiro, in turn creating increased space for Benzema to rotate with Griezmann. Complemented by Pogba's forward passes, Mbappé increasingly offered France's most central, penetrative threat; the rotations and movements made in the final third also drew Portugal's midfield three sufficiently for Pogba to play the penetrative passes he desired.

When France had possession for lengthier periods, Portugal withdrew into a lower block. Jules Koundé overlapped around Tolisso from right-back, and Tolisso moved infield, presenting Benzema with a further number 10 with which to combine. At 1-0 down, they continued to offer those rotations between the lines in the centre of the pitch, but lacked the penetrations and combinations required to progress through that lower block.

Beyond more direct passes for the runs of Mbappé, France struggled to penetrate through Portugal's midfield three when they remained in that lower block. There were even occasions when the space in behind they required for their direct passes didn't exist. With both Pogba and N'Golo Kanté remaining behind the ball, they also offered fewer numbers ahead of it when they were perhaps required.

Benzema scored from the penalty spot when a penalty was won via Mbappé's run being blocked when he was pursuing a direct ball. Benzema then gave France the lead early in the second half, when a superbly timed run in behind was complemented by an equally impressive pass from Pogba as they took advantage of the minimal space that existed behind Portugal's mid-block.

When Mbappé adopted more central positions when France built possession, Benzema moved into the right inside channel or withdrew into a deeper position, and Griezmann, Pogba and Kanté moved towards the left to support around Adrien Rabiot, playing out of position at left-back. When the latter began to drift infield and to advance from left-back, he was covered by either Pogba or Kanté.

Kingsley Coman's introduction as a substitute then meant France offering similar threats towards both the left and right, and Griezmann remaining central to rotate between the lines with Benzema. When Griezmann and Benzema rotated at the same time, Coman and Mbappé threatened in behind, until Portugal withdrew into an even more compact lower block.