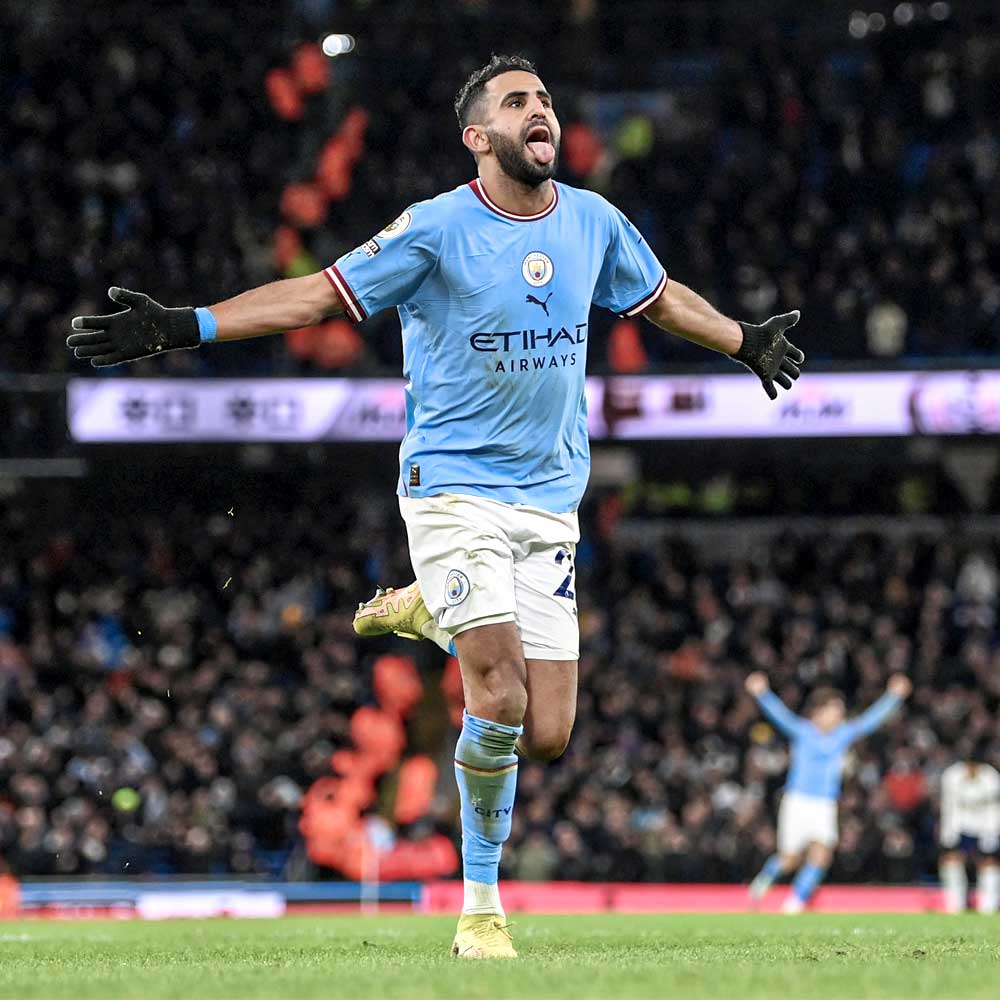 When Manchester City were staring a third successive defeat in the face at half-time of this Premier League meeting with Antonio Conte's Tottenham Hotspur, their season was threatening to unravel. Boos had greeted the referee's half-time whistle at the Etihad, after Spurs had scored two goals in the three minutes before the break to race into a 2-0 lead. Pep Guardiola was far from happy with his team, but they came out firing on all cylinders for the second half and produced an astonishing comeback to win the game remarkably comfortably in the end.

City remain five points behind Premier League leaders Arsenal. After the game, Guardiola said he needs more from everyone related to the club if they are to overturn the deficit in the second half of the season and retain the title.

"I cannot deny how happy we are [with the win], but we are far away from the team that we were," he said. "I want a reaction from the whole organisation. Not just the players. I want our fans to push us. Demand more. Say: 'Come on guys.' Show us more. We are a happy flowers team, all nice and good. I don't want to be a happy flower. I want to beat Arsenal. If we play that way, Arsenal will destroy us."

City initially lined up in a 4-3-3 shape, but youngster Rico Lewis moved inside from right-back to create a double pivot with Rodri. This left a three-man defence, with Lewis and Rodri offering passing lines in the gaps on the inside of Tottenham’s wide forwards Son Heung-min and Dejan Kulusevski. One of Spurs’ central midfielders, Pierre-Emile Højbjerg and Rodrigo Bentancur, was then forced to aggressively jump out to press the hosts’ double pivot (below). Whenever City then managed to access the space behind the Spurs midfield, they progressed into the final third with purpose, with number eights Julián Álvarez and Ilkay Gündogan particularly effective receiving in this space. However, with John Stones and Nathan Aké, who are naturally centre-backs, the only wide players providing support underneath wide midfielders Jack Grealish and Riyad Mahrez, City struggled to create much out wide.

Exploiting the space in behind

In the moments when Tottenham’s back line left space in behind, the hosts looked to play balls over their 5-2-3 block. Erling Haaland’s movements in behind were a constant threat, and City tried to find him with direct balls into space created by, for example, Gündogan dropping short to drag Cristian Romero away from the Spurs defence (below). Ben Davies and Eric Dier then tried to double up on Haaland, but this left Álvarez free to make penetrative runs through the right inside channel. City’s passing lacked its usual tempo and quality, though. Mahrez had to check back on to his left foot consistently in the first half, which slowed their progress down the right  and meant they struggled to find Álvarez’s runs.

In the second half, Lewis and Aké supported the wingers more consistently by providing overlapping or underlapping runs out wide (below). City still created a double pivot, with the far-side full-back moving infield. This helped limit any counter-attacks through the middle of the pitch from Spurs, and also meant they could work the ball from one side to the other efficiently – as was the case for their third goal, scored by Mahrez. The full-backs’ supporting runs now meant Grealish and Mahrez could isolate Tottenham’s wing-backs and dribble at them, as Son and Kulusevski had to track Aké and Lewis rather than doubling up on the wingers.

Although City improved in the second half, it was Mahrez’s individual brilliance that proved the difference. Lewis’ role should not be underestimated, though, with the youngster providing constant runs to help Mahrez isolate Ivan Perisic, who he got the better of time and again. Son was then forced to track back even deeper, which negated his threat on the counter – but even this wasn’t enough to stop Mahrez. City committed lots of players into the penalty area as they looked to overturn Tottenham’s lead, and Mahrez’s dribbling and combination play (below) proved key. He pulled City back into the game with a big role in each of his side’s three goals in 12 minutes early in the second half, before adding a fourth after Clément Lenglet’s error.

Playing out from the back

Tottenham operated in a 3-4-2-1 shape with the ball, and built short against City's high press. City went man for man from their 4-3-3 shape, with Bentancur and Højbjerg often receiving under pressure from Álvarez or Gündogan (below). Whenever Spurs’ defenders managed to penetrate with passes between City’s number eights and wingers, they found Son and Kulusevski, or occasionally a widening Harry Kane, to bounce the ball outwards to their wing-backs. They did this relatively well in the first half, with their their play down the right particularly effective. Nathan Aké often started too deep, leaving himself a bigger distance to cover, which gave Tottenham right wing-back Emerson Royal more space and time to receive.

Spurs also attempted to press City high up the pitch, but the hosts consistently managed to play through or around this pressure for most of the first half. When Højbjerg or Bentancur jumped out to City’s double pivot, they bounced the ball out to Aké or Stones, or set a pass back before then penetrating forwards to find a number eight. However, Son and Kulusevski started to block these passes out wide, which forced Ederson to play straight into Rodri and Lewis in the double pivot, and Spurs were rewarded for being so bold with their press. Under pressure from Bentancur (below), Rodri misplaced his pass and Kulusevski pounced to score. With City reeling, Emerson then doubled Spurs’ lead after an incisive break from their own half.

Kulusevski’s movements towards the ball on the visitors’ right side helped penetrate in behind City’s back line, particularly when Aké jumped forward to press with the aim of stopping his opponent from receiving and turning. The Swede made clever double movements, though, to exploit the space in behind Aké and get in behind. A pass into Kane and a third-man run from Kulusevski (below) led to Tottenham’s best chance of the second half, with Perisic missing a golden opportunity to put Spurs 3-2 up from Kulusevski’s delivery across goal. Spurs were made to pay for that profligacy.

Kane was typically effective in finding forward runners. He did a great of job pinning Manuel Akanji and setting into Son or Kulusevski, who moved inside when a pass went to Kane. However, after Richarlison was introduced, Kulusevski moved to right wing-back, so he was forced to drop deeper to defend, and thus lost any impact in the final third. Kane’s hold-up play provided crucial time for Tottenham’s two 10s to push forward, but with Kulusevski deeper the visitors lacked the same threat close to goal. City put the result beyond doubt as Mahrez broke up field to score, as they kept up the pressure on Arsenal at the top of the table.