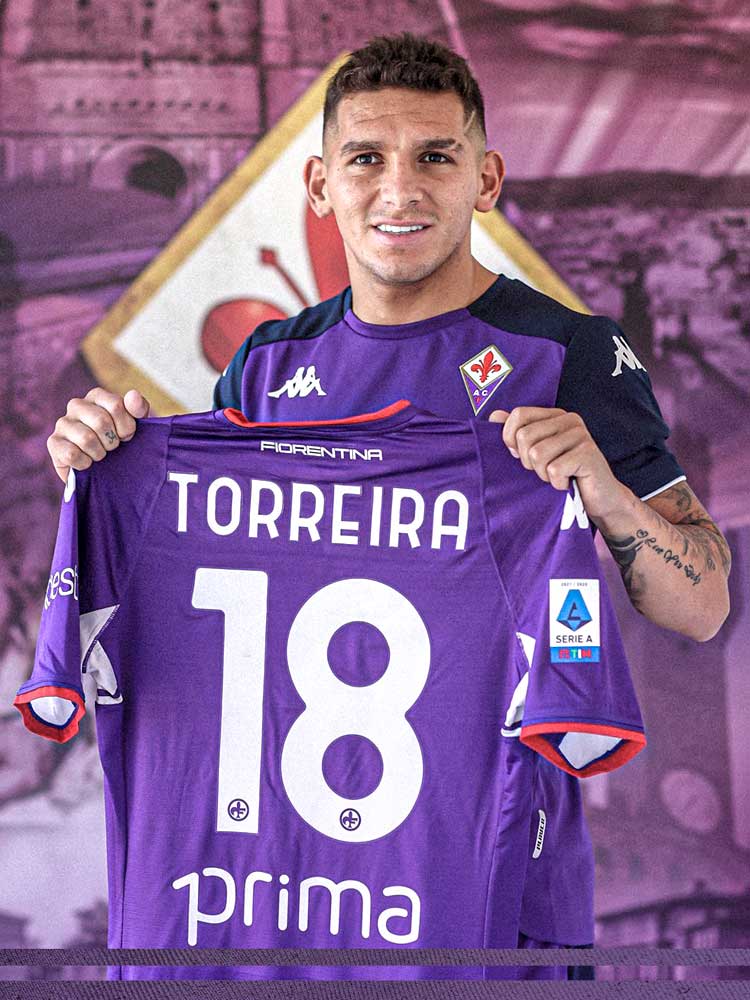 Profile
For all that Lucas Torreira appeared suited to a role under Diego Simeone at Atlético Madrid, he returned to Arsenal after the conclusion of 2020/21, and therefore his loan. Before being loaned out by Mikel Arteta he had also made a promising start at Arsenal, but the recruitment of Thomas Partey as Arteta shaped his team after succeeding Unai Emery made him peripheral there, contributing to him returning to Serie A – where he once made his name with Sampdoria – this time on loan to Fiorentina.

"I still have a two-year contract with Arsenal and obviously when I finish with the national team I will have to return to Arsenal and then we will see," said the Uruguayan, 25 at the time of his return to Italy in August 2021. "But I have to make it very clear that I was very happy at Atlético. I became a champion, so I am very proud."

Tactical analysis
Torreira is comfortable in possession, at his best making passes with his stronger right foot, and is effective when playing forwards through or over lines in the opposition’s structure. He has the ability to split opponents with pinpoint passing, but does not dominate and control matches with the volume of passes that Andrea Pirlo or Sergio Busquets would make.

Although he has the technical qualities to do that role and to provide the link between defence and attack with lots of short passes, he often remains static after releasing the ball. Torreira’s game is therefore far more suited to a direct playing style, rather than sustained periods with the ball. He is also occasionally guilty of holding on to the ball for too long and can be a target for counter-pressing. Getting caught in possession has had an effect on his decision making, and he consequently looks to quickly move the ball out of his feet to make a pass to an advanced teammate, or to players positioned in the spaces to the sides of central midfield.

He is constantly alert to any potential loss of possession and is always ready for a defensive transition, which may explain why he rarely follows his passes forwards and risks leaving a gap that can be exploited by the opposition. He displays good reading of the game, and as well as making lots of interceptions, Torreira is quick to support a teammate when they collect a loose ball, offering a fast, safe passing option away from pressure that can secure possession for his team. By maintaining a position behind the ball, he often blocks off any central counter-attacks, at the very least discouraging the opposition from progressing through the middle of the pitch merely through his positioning.

His ball-winning ability is extremely useful when he plays in a side that presses aggressively and requires a combative central midfield unit; he is incredibly tenacious in trying to win the ball back. If he is beaten, Torreira will hunt his opponent down and do his utmost to get goal side of the ball to slow their attack.

That quality is most evident during defensive transitions, when he acts in a similar way to Chelsea’s N’Golo Kanté, pressing with both intelligence and aggression (above), and curving his run to reduce the options for his opponent to pass their way out of trouble.

Role at Atlético Madrid
Torreira had played as half of the central midfield pairing in Simeone’s flat 4-4-2, in which his primary function was defensive. He made movements out of their midfield line to press his direct opponent and delay their progress (below) – Simeone’s side is well-drilled in narrowing its midfield line when an individual jumps out. Constant pressure on the ball carrier and compactness is maintained, also creating more opportunities for his team to win the ball.

When Torreira didn’t win possession in that kind of situation, he usually forced play wide, encouraging opponents to attack around the outside of Atlético’s compact structure, which is exactly what Simeone wants from his team. Torreira was then quick to retreat and recover back into central midfield, allowing their wider midfielders to spread and, if necessary, push out to press the new ball carrier.

Sometimes Torreira will needlessly go to ground in an attempt to win the ball too hastily, and that can jeopardise his entire team’s set-up. Although that doesn’t happen at all often, one player out of sync in a low block like Atlético’s could create enough space for an opposing attacker to progress centrally, even if that rarely happened against Simeone’s side.

During their own spells of possession, Atlético’s centre-backs and central midfielders often create a box (below), and from his position Torreira played a key role during transitions. With both full-backs allowed to move forwards, he and his midfield partner were required to cover both central and wide threats when Atlético lost possession. It is in those situations when Torreira is arguably at his best, when his energy and dynamism is crucial to him being able to quickly negate an opponent's counter.

It appeared as though Torreira had been instructed to pass the ball wide, with Atlético generally building around opponents. Due to the advanced positions of their full-backs, many of Torreira’s forward passes were directed wide, either for their full-backs to run on to, or to feet if they had already made their move. He did not follow his passes upfield, and remained in front of their centre-backs, when his central midfield partner – often Koke – was more willing to move forward and support attacks.

Torreira rarely played vertical passes, and often looked to find Koke with a short pass; the two had a good understanding with which Torreira indicated the type of ball that Koke should play with his passes to his midfield partner. Both knew that switches of play to their full-backs were often options, and Torreira tried to play his passes to Koke in a way that demonstrated that option.

Although one of their centre-forwards often drops to between the lines to receive a pass from central midfield, Torreira didn’t played many of the vertical, opposition-splitting passes that were seen in abundance at Sampdoria. Instead he tended to play far less adventurously, which was likely the influence of Simeone.