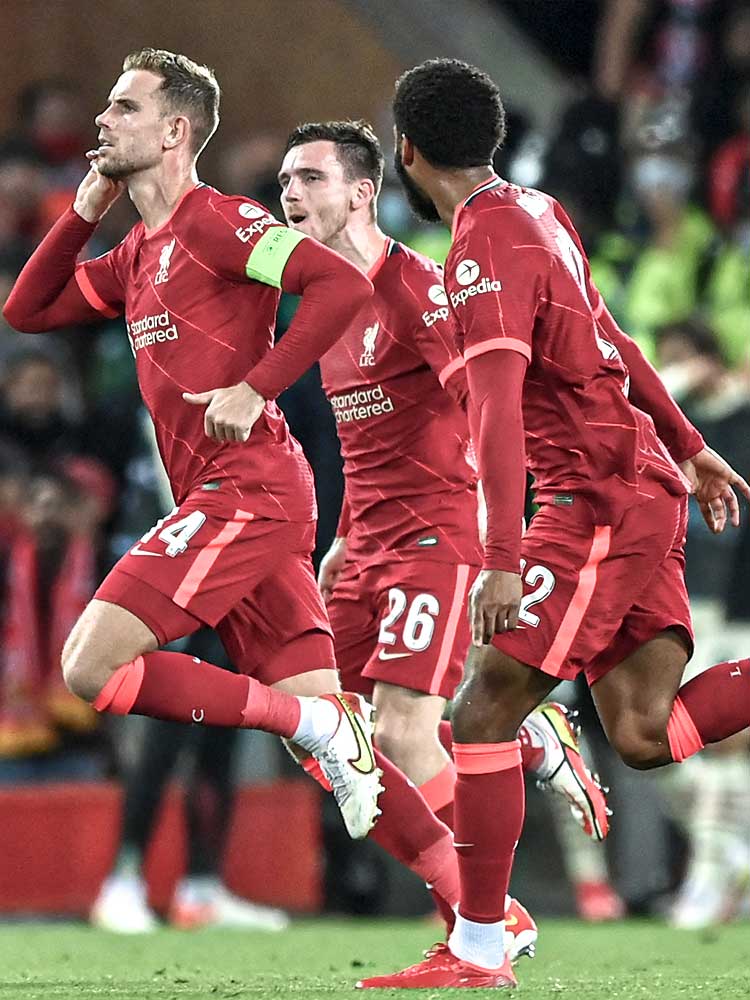 Liverpool repeated history by recovering from a losing position to beat AC Milan in the Champions League. In the opening round of Group B fixtures, an own goal from Fikayo Tomori gave the hosts a deserved lead, but after Mo Salah's penalty was saved by Mike Maignan, two goals in the space of three minutes from Ante Rebic and Brahim Díaz ensured it was Milan who led at half-time. Salah's equalising goal early in the second half brought Liverpool level, and Jordan Henderson then scored his first Champions League goal for seven years to secure all three points. "It was a brilliant game, very exciting and very entertaining with 10-15 minutes where we lost a little bit of the plot," said their manager Jürgen Klopp. “We were not compact any more and got carried away with our own football. We complicated matters. Our defensive line was too deep, the midfield was not closing the gaps any more and so they could pass through us and score a few goals. But we adapted at half-time and played again really good football." His opposite number, Stefano Pioli, said: "They played a game of high quality and high intensity and in certain situations we weren’t up to it from a physical point of view. We tried to withstand all of that and maybe not as well as we could have done."

Liverpool were organised by their manager Jürgen Klopp into a 4-3-3 formation led, on this occasion, by Divock Origi. Their opponents, AC Milan, defended with a 4-4-2, via Brahim Díaz advancing to alongside Ante Rebic.

Liverpool's full-backs advanced to build and progress around Milan's mid-block; Naby Keïta withdrew to alongside Fabinho, and Jordan Henderson advanced through the right inside channel. From the left, Andy Robertson sought to cross as early as possible; from the right, Trent Alexander-Arnold both provided crosses and combined with Henderson and those around him, and largely because Mo Salah occupied Theo Hernández. It was when Alexander-Arnold provided an underlapping run and cross that that cross was deflected in by Fikayo Tomori to give Liverpool the lead.

Diogo Jota, from the left of Liverpool's front three, withdrew into deeper territory as they built possession. He was aggressively followed by one of Milan's back four when he did so; with Milan's 4-4-2 shuffling across, Liverpool capitalised by switching play to the right, into the feet of either Alexander-Arnold or Salah. In doing so, increased passing options were also created around Robertson, who had increased support through the inside channel.

On the occasions Salah drifted to a central position closer to Origi, the hosts posed an increased threat in the final third. Alexander-Arnold retained their width, and instead of advancing through the inside channel, Henderson supported from behind the ball and when Jota moved infield to preserve their overload in midfield. It was via that altered shape that Salah scored their equalising goal, after he combined with Origi around Milan's central defenders.

When Jota then moved to operate as Liverpool's central attacker and Sadio Mané came off the bench to feature towards the left and attack through the left inside channel, Mané resisted making the same movements into central midfield. Rebic's more advanced position on the left gave Liverpool increased space on the right, and there also existed more space in central midfield to control possession and build play. While they therefore had to remain wary of Rebic's positioning, they offered more numbers further forwards. Even with fewer rotations, Milan's midfield line simply struggled to cover in the middle third.

Curtis Jones replacing Jota meant Mané taking a more central role and Jones instead featuring towards the left. With Salah and Alexander-Arnold continuing to relish the increased space towards the right, and supported by those in central midfield, Liverpool continued to control what unfolded and to be covered during potential moments of transition, and against Milan's attempts to counter and link into runners via direct passes into Olivier Giroud.

Stefano Pioli set AC Milan up into a 4-2-3-1 that featured Simon Kjaer and Fikayo Tomori in central defence. Their hosts, Liverpool, defended with the same 4-3-3 with which they attacked, and when doing so for lengthier periods adopted a mid-block.

The double pivot formed by Franck Kessie and Ismaël Bennacer was aggressively marked by Jordan Henderson and Naby Keïta, in an attempt to negate Milan's attempts to build play in central midfield, and Fabinho prioritised Brahim Díaz. That there existed an overload between Kjaer and Tomori against Divock Origi gave them a method of building and progression possession, and movements into wider territory from Ante Rebic and Díaz created a passing lane from central defence through the inside channels and away from the aggressive counter-press being applied in central midfield. It was when Liverpool's wide forwards moved infield to cover the inside channels that Milan struggled to build.

When their full-backs advanced further forwards, those same wide forwards were forced to take wider, and deeper, positions, reopening the inside channels, where Rafael Leão and Alexis Saelemaekers sought to receive passes and to either combine with their front two or set possession to their overlapping full-backs. Their support around Rebic invited Díaz to withdraw into deeper territory and draw Fabinho out of position, in turn creating increased space between the lines; if Fabinho instead retained his position, Díaz was instead capable of receiving with freedom, and playing into their front two. Quick combinations between Leão and Saelemaekers, operating infield, and Rebic led to their equalising goal, and with a counter they then took the lead.

Milan, regardless, thereafter struggled to advance out of their defensive half. Their attempted counters were covered by Liverpool's central defenders and aggressive shape in central midfield. Díaz often became isolated when attempting to receive between the lines, and struggled to find Rebic or retain possession long enough for Leão and Saelemaekers to move to offer support. Liverpool superbly covered against potential counters throughout the second half.

When Olivier Giroud came off the bench to feature as their striker, Rebic moved to the left, which meant that when they attempted to counter Díaz drifted into the right inside channel, and Giroud withdrew to link into those making forward runs. They risked leaving increased space for Liverpool to attack into, but did so to create an increased counter-attacking presence – potentially directly into Giroud – should regains be made.

If they instead had an increased grasp of possession, they offered a narrower front three and relied on their full-backs to provide their width. One defensive midfielder then withdrew into central defence, and the other advanced to support their front three. Direct passes or crosses into Giroud, regardless, ultimately came to little.