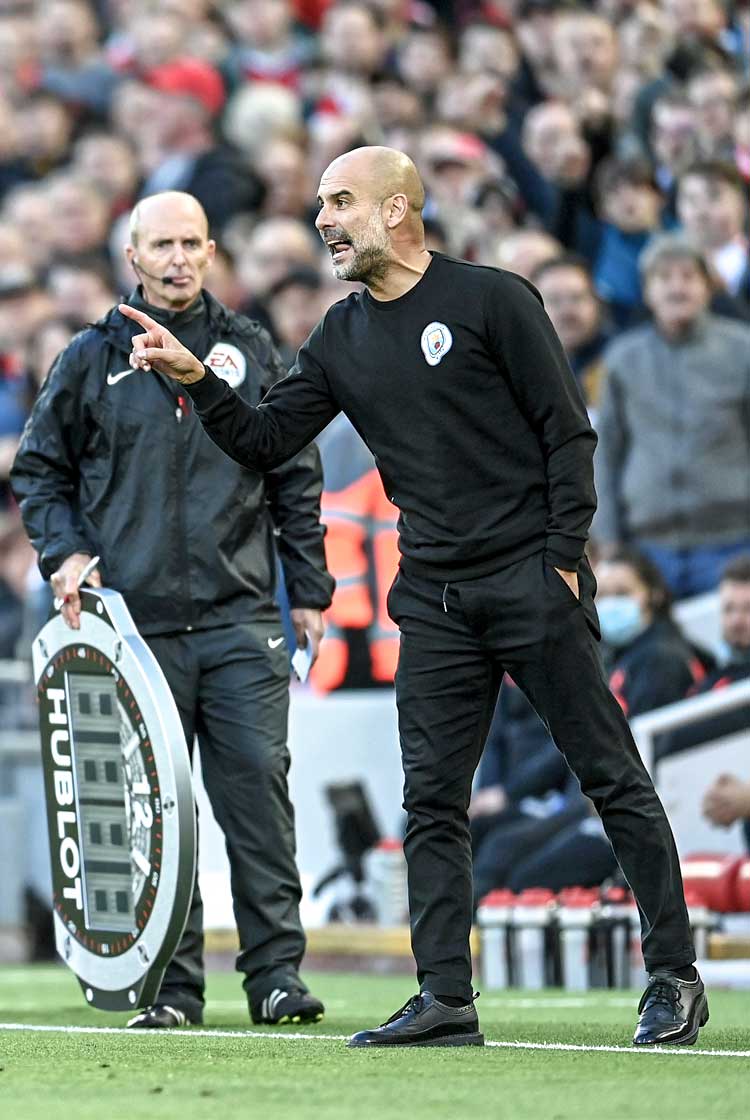 Manchester City came from behind twice to take a point in what was a hugely entertaining affair at Anfield. After a goalless first half, the game came to life in the second; Sadio Mané's opener was cancelled out by Phil Foden, and Mo Salah's brilliant individual goal was not quite enough to secure victory, with Kevin De Bruyne equalising nine minutes from time via a big deflection. City manager Pep Guardiola was left enraged by two big refereeing decisions – first when Foden went down in the penalty area but a penalty was not given, and secondly when referee Paul Tierney decided against handing James Milner a second yellow card for a foul on Bernardo Silva. Guardiola's remonstrations ended with him earning a yellow card. “It's a yellow card. It's a yellow card. It's clear,” Guardiola said of the Milner incident. “But it's Anfield. In our situation a City player is sent off. It's clear. It was a second yellow.”

Liverpool were set up in a 4-3-3 shape by their manager Jürgen Klopp, and they faced a Manchester City side who played in an out-of-possession 4-3-3 block.

Some crucial early movement came from Liverpool’s single pivot, Fabinho. He was initially being marked by Jack Grealish, but then moved to one side to create a central space for Joël Matip to drive into from defence. One of City’s attacking midfielders then had to move out to cover Matip, which left Jordan Henderson or Curtis Jones free to receive and connect a pass into the front line. If Matip was not pressed, he would step out through the right inside channel, before playing a forward pass into the front line himself.

Mané was also supported by Jones in Liverpool’s left inside channel, but City’s narrow defensive block frequently recovered the ball in this area of the pitch, having effectively crowded out their opponents.

The visitors changed their set-up slightly to defend either with Gabriel Jesus in a narrower position to support Grealish or Kevin De Bruyne jumping forward from midfield to make a 4-4-2 block inside Liverpool’s half. This helped to stop Liverpool driving through the centre of the pitch, and Matip had to step into midfield from a much wider position.

As Liverpool spent considerable periods defending, their wingers were often very narrow, which might have been ideal for when they regained the ball and launched counter-attacks. However, with City’s full-backs narrowing quickly to support Rodri in central midfield, and their attacking midfielders counter-pressing effectively, Liverpool struggled to find a consistent route into their opponents’ half.

When Liverpool had sustained possession, Mané and Salah held wide positions, which led to space being created centrally for vertical passes into Jota, with Henderson and Jones making supporting runs. Mané and Jota rotated on occasion, but Liverpool were sure to attack with more width after struggling initially.

Whenever City narrowed to cut off passes to the centre-forward, Liverpool built out to their wide players, and it was Salah and Mané who combined for the opening goal. Mané made a run across the City back line to receive in behind and finish past Ederson.

Roberto Firmino then replaced Jota, but Liverpool continued to focus on playing around their opponents. Underlapping runs from their full-backs were used as a decoy, and play was switched out to Salah or Mané as often as possible. Once Liverpool had pushed City back into a lower block, Salah and Mané then narrowed to attack through the inside channels. Salah later put the hosts 2-1 up after a superb individual goal having come in off the flank.

When Liverpool’s midfielders dropped into defence, their full-backs moved forward to support Mané and Salah out wide, and when the full-backs were more reserved, Henderson and Jones pushed higher. However, Liverpool could not break through City for a third time and, after being pegged back by De Bruyne’s equaliser, they could not find a winner.

Pep Guardiola set Manchester City up in a 4-3-3 when in possession, and they came up against Liverpool’s 4-3-3 block. Jack Grealish started as City's centre-forward, supported by Phil Foden on the left, and Gabriel Jesus on the right. Attacking midfielders Bernardo Silva and Kevin De Bruyne widened as City moved the ball to their full-backs, and they were able to connect the full-backs to the wingers. Grealish dropped centrally to add another number in central midfield, and Jesus and Foden offered direct runs in behind Liverpool’s defence. The midfielders or full-backs then played forward passes around the hosts’ back line to find these runs in behind.

When Grealish dropped, Jesus stayed wide on the right, and De Bruyne did not make a forward run, City lacked threat on their right, but the combinations on their left involving Silva, João Cancelo, Foden, and sometimes Grealish, provided a more effective route forwards. Ederson’s range of passing further helped on this side, with the goalkeeper making some outrageous passes from deep.

Once De Bruyne and Silva positioned themselves in the inside channels to receive off the shoulder of Liverpool’s far-side central midfielder, their attacking play carried much more threat. When this happened, they no longer required Grealish to drop from centre-forward, as the midfield could link into their wingers. Out wide, Foden was particularly threatening up against James Milner.

City continued to look to play around Liverpool’s narrow 4-3-3, and overlapping runs from right-back Kyle Walker played a big role in increasing their threat down that flank. One of these runs from Walker helped Jesus drive inside from the right, and he play Foden in on the left, who finished well across goal to equalise.

City continued to build into the attacking midfielders in the inside channels, before working the ball wide for the wingers, but their wide players also dropped deep on occasion, with the closest attacking midfielder – usually De Bruyne on the right side – running through the inside channel. De Bruyne’s high and narrow position on the right throughout the second half meant City were much less reliant on their left side. This gave them a better overall attacking balance in the second half, and each of their two goals stemmed from play on opposite sides of the pitch.