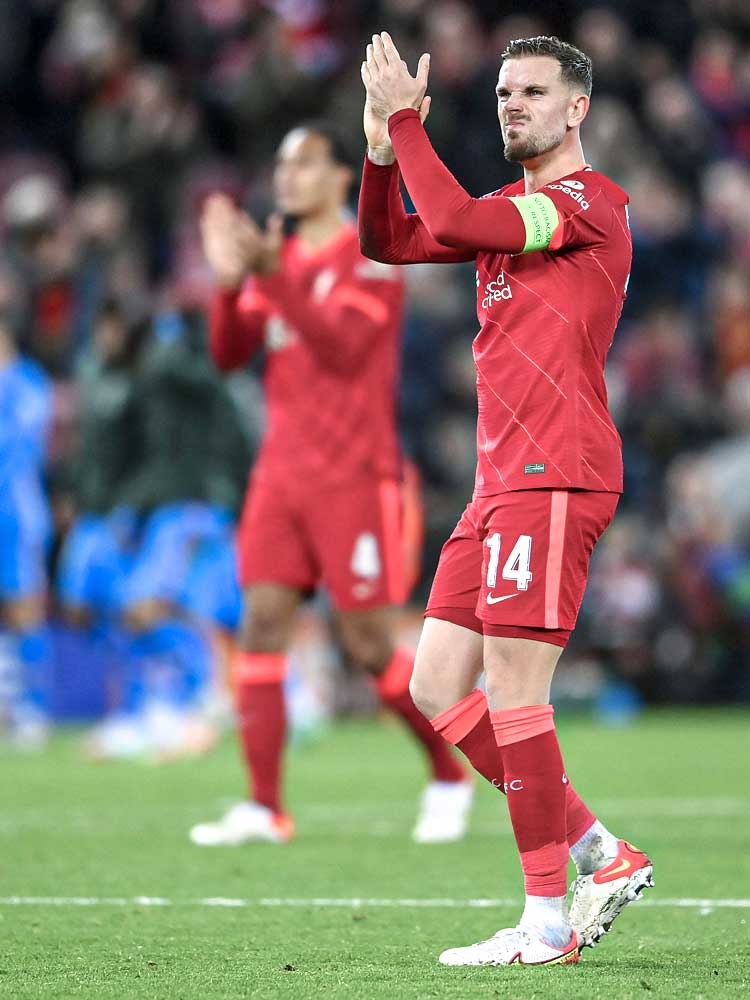 Liverpool secured their place in the Champions League's knockout stages with another convincing victory over Atlético Madrid, this time at Anfield. Diogo Jota and Sadio Mané had already given them a two-goal lead when, in the 36th minute, Atlético defender Felipe was sent off, undermining their chances of staging a comeback. Diego Simeone's team are third in Group B, with four points – eight behind Liverpool – from their four fixtures, but remain favourites to advance ahead of second-placed Porto, who are on five points. "We scored the goals in the right moments," said Jürgen Klopp. "They were much more on the front-foot with how they started than the home game but we started well. They were fantastic finishes." His opposite number said: "I liked the way we were able to suffer in the second half. The second half served the purpose in showing us that when we press we can defend better."

Different use of the number eights
In Liverpool’s 4-3-3, their number eights offered different movements. On the left, Alex Oxlade-Chamberlain moved wide, Konstantinos Tsimikas overlapped (below), and Sadio Mané moved infield. On the right, Mo Salah held Liverpool's width, and Jordan Henderson pushed forwards via either underlapping runs through the inside channel or overlapping runs around Salah, who dribbled infield. Trent Alexander-Arnold was then positioned slightly deeper, and Diogo Jota dropped from centre-forward, creating space for his teammates to make runs through the centre of the pitch and Mané to often become Liverpool’s main central threat.

Liverpool’s right side created gaps
With Liverpool’s greatest creative threat often coming from their three players towards the right, Atlético’s left-sided centre-back was often forced to step out and engage, creating gaps for both Mané and Jota to run through (below) and chase balls played in behind. Tsimikas and Oxlade-Chamberlain then squeezed inside, helping to restrict Atlético to a deep defensive block. Alexander-Arnold put balls in from a deep position on the right; both of the hosts’ goals came from his deliveries across goal into the well-timed runs of Jota and Mané.

Building with a back three
Once Atlético were reduced to 10 men they sat off Liverpool and formed a 5-3-1 block for the entirety of the second half. In Liverpool’s build-up phases, Henderson dropped back to form a back three with their central defenders (below). Their wider central defenders were then able to step into midfield and work around Atlético’s isolated striker, and their width was then provided by their full-backs. Liverpool – Fabinho remained their defensive midfielder – ensured they had passing options both through the visitors’ midfield line and around the outside of their block, usually via Jota moving wide and Oxlade-Chamberlain advancing.

Late switches of play
With Atlético retaining their low block for most of the second half, Liverpool dominated possession. The visitors’ midfield three remained compact throughout and rarely jumped to press the ball. Liverpool then placed two permanent centre-forwards against Atlético’s back three, and others joined to help combine through the inside channels and wide territory. With Fabinho replaced by Thiago Alcântara as their pivot, Liverpool constantly switched play. In an attempt to draw the visitors' back line out of shape as the ball was switched across, one centre-forward rotated with a teammate in the inside channel – as was best demonstrated by Firmino moving to the left. Jota also did so on occasion, when Salah drifted infield from the right.

Attacking with a 3-4-3...
Atlético attacked with a 3-4-3 led by Luis Suárez – who was supported by Ángel Correa and João Félix – from which their wing-backs Kieran Trippier and Yannick Carrasco provided their attacking width, and Koke and Rodrigo de Paul formed their double pivot and therefore provided protection from in front of their back three. On the occasions Félix was positioned closer to Alexander-Arnold, Carrasco had more time and space in which to receive passes – particularly those played directly from Koke, De Paul, or their back three – and to attack Alexander-Arnold one-on-one when he had numerous options in the penalty area. Salah or Henderson were later forced to support Alexander-Arnold by limiting Carrasco's space, but by working possession back into Koke or De Paul, Atlético proved capable of switches of play or of delivering crosses from deeper territory into the runs made by Trippier or Correa.

... and threatening towards the left
It was towards the left that Atlético posed their greatest threat, and largely because of Carrasco's advanced positioning. Mario Hermoso advanced from his position as their left-sided central defender to support him, and Félix withdrew to towards the ball and to link play from Koke and De Paul. Félix sought to combine with his teammates around Liverpool's increasingly compact block – their back four and midfield lines sought to prevent Atlético from progressing through central territory – and, as he did so and Carrasco continued to move in behind, Joël Matip was drawn out of position, making combinations into Suárez or Correa more possible.

Forming a midfield box
As Atlético's influence grew, Koke and De Paul, from the base of midfield, and their two number 10s – while slightly withdrawn – formed a midfield box that enhanced their potential for combinations. Suárez positioned himself towards Matip and, with Carrasco occupying Alexander-Arnold, Tsimikas moving out to press Trippier and Van Dijk holding his position, Félix and Correa had increased time and space in which to move and receive and progress possession. Only a lack of movement further forwards, and the red card that soon followed when they were already two goals down, stopped them from building on the threat they posed.

To learn more from the professional coach of The Coaches’ Voice, visit CV Academy