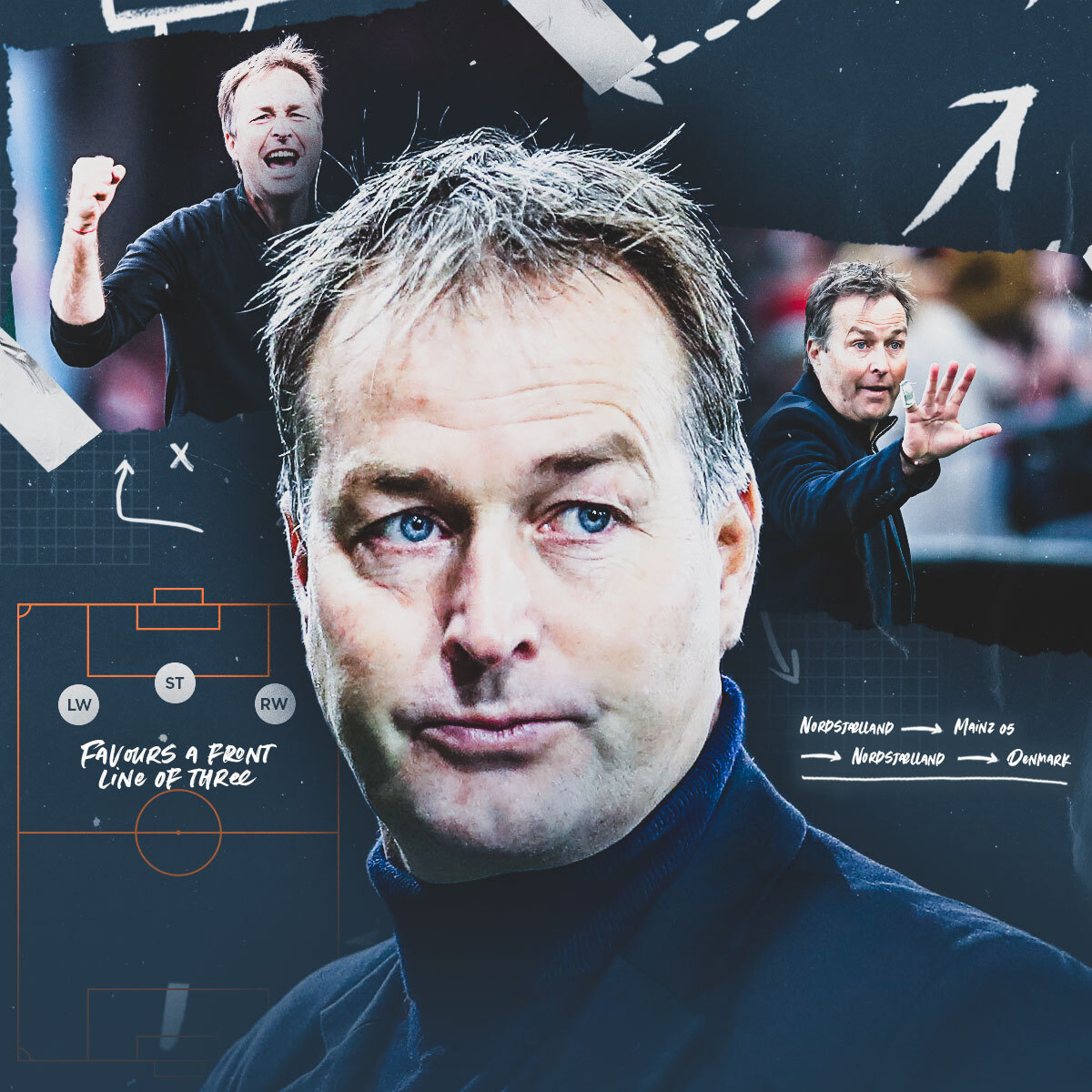 It is not often that an assistant succeeds their manager and then goes on to outshine them, but Kasper Hjulmand did just that early in his coaching career. After three years as Morten Wieghorst's number two at Nordsjaelland, Hjulmand was handed the reins at the Danish Superliga club in the summer of 2011. Then, in his first season in charge, Hjulmand led Nordsjaelland to their first ever league title – and with it a foray into the Champions League group stage, where they faced Chelsea and Juventus.

Hjulmand then had a brief spell at Mainz, where he succeeded Thomas Tuchel, before another impressive – albeit less successful – stint at Nordsjaelland between 2016 and 2019. Then in 2020, he was given the Denmark manager's job; after Euro 2020 was delayed by a year, he led his nation to the European Championship semi finals, where they were defeated by England.

His work has now been recognised on the world stage, and there are suggestions that he is destined to work in a top European league before long. We've taken a detailed look at the football Hjulmand likes his teams to play.

Hjulmand has often used a front three in possession, usually as part of a 4-3-3 shape. He has also used back-three systems as well, but even then he maintains the front line of three in a 3-4-3, or a slight variation in a 3-4-2-1, as was the case in his second spell in charge of Nordsjaelland. He favours a possession-based style of play, with his Nordsjaelland side consistently among the highest-ranking sides in the Danish league for possession across his three full seasons between 2016 and 2019.

In that 4-3-3 shape, the team’s width is provided by the wingers, with Hjulmand then giving those players licence to move inside with or without the ball. During his second spell at Nordsjaelland, he used a pair of teenagers – Mikkel Damsgaard and Andreas Skov Olsen – as wrong-footed wingers. Both now play a key role in the front line of the Denmark national side under Hjulmand.

Whenever the number eights held their positions and the inside channels remained unoccupied, these wingers would move inside to receive between the lines, and look to link midfield with the lone centre-forward. Hjulmand’s number eights would usually push forward, though, and look to move inside the opposition’s full-backs. Here, the wingers would try to draw the full-backs out of position by holding a wide position (below).

When playing with a back three, Hjulmand often looked to his centre-forward to drop into midfield during build-up, with the the rest of the front line narrowing. This formed a central midfield three, with two number eights now operating in a similar fashion to in his 4-3-3 shape.

Alternatively, one of the wider forwards can narrow and drop to become a 10, with the other winger also moving inside but staying higher to become a second centre-forward. Either rotation creates a midfield three and makes space for the wing-backs to exploit out wide.

Hjulmand encourages his full-backs to advance beyond the three in midfield, who try to dominate the ball with short passing combinations. When Hjulmand uses a 3-4-3, the wing-backs start very high and form a front line of five alongside the narrowed front three.

Hjulmand has shown impressive adaptability within games during his time as Denmark manager, with structural changes allowing his side to build attacks according to the opposition’s weaknesses. At Euro 2020, he changed his side’s structure at least once in every match. Some games featured several formation changes, as he switched between a back three and a back four regularly.

With Denmark, midfielders such as Pierre-Emile Højbjerg, Thomas Delaney, Mathias Jensen and Christan Eriksen are all comfortable taking up a position underneath the ball while the full-backs advance, but can also join attacks with delayed forward runs. Therefore, if the wingers maintain the team’s width and the number eights hold their positions, the spaces a number 10 would normally take up can be briefly filled by the advancing full-backs.

Hjulmand likes mobile players to move into and then quickly out of the number-10 spaces between the lines. Atalanta left-back Maehle has gained experience playing in a very fluid attacking system under Gian Piero Gasperini. Leeds defender Rasmus Kristensen and Trabzonspor’s Jens Stryger Larsen are also both effective as flexible full-backs. They are comfortable going forward, while also working off the movements of players ahead to support the lone centre-forward.

Both with Nordsjaelland and Denmark, Hjulmand has used a mid-block out of possession, only consistently pressing with aggression once his team is set into a compact block. Transitioning from a 4-3-3 attacking shape, the full-backs recover into the back line, with the single pivot in a screening position ahead of the centre-backs. The wingers also recover back into the second line, with the centre-forward alone at the top of the block. This shape becomes a 4-1-4-1.

When pressing from this block, the two numbers eights individually press from the second line, aggressively jumping forward to press the ball (below). As long as the closest winger narrows to cover the inside channel, and the single pivot pushes across, Hjulmand’s mid-block with Nordsjaelland was effective at preventing the opposition from playing through the team.

The winger on the far side of the pitch narrowing off would help create a compact second line that would shift from side to side to limit the impact of any switches of play by the opposition. If there was a lack of cover underneath the number eight who jumped out, or if the far-side winger did not tuck in, opponents could often work the ball through Hjulmand’s second line too easily.

When Hjulmand plays with a back three, his team defends with five at the back once they’ve dropped into their mid-block, either in a 5-3-2 or a 5-2-3. When playing with a 5-2-3, they set pressing traps in the wide areas, as the wing-back and closest centre-back jump out to press when play is forced wide (below). The nearest of the three forwards will then press the ball from behind, aiming to lock the ball near the touchline. The central midfielders move across the pitch to aid this.

This 5-2-3 block also means Hjulmand can retain his favoured front line of three on transition. Three players will be up the pitch – or at least ready to break up the pitch – to latch on to quick and incisive forward passes on the counter. However, if Hjulmand’s team needs to defend for longer periods, it can also convert into a flatter, more defensive 5-4-1 mid-block.

A 5-3-2 block provides an extra presence in central midfield, but Hjulmand’s sides are more exposed out wide, at least initially. The number eights are then required to work hard to press in the wide areas, aiming to force the play away from the centre of the pitch. Out wide, the wing-backs are required to press aggressively and may even start slightly higher than they would in a completely flat back five, largely because there will be no wide forward to press the ball from behind.

Hjulmand’s style of play has brought plenty of success and has also caught the eye of many clubs around Europe. Plenty expect him to be managing in one of Europe’s major leagues before long. It will be fascinating to see where, once his time with Denmark has come to a close, he ends up.