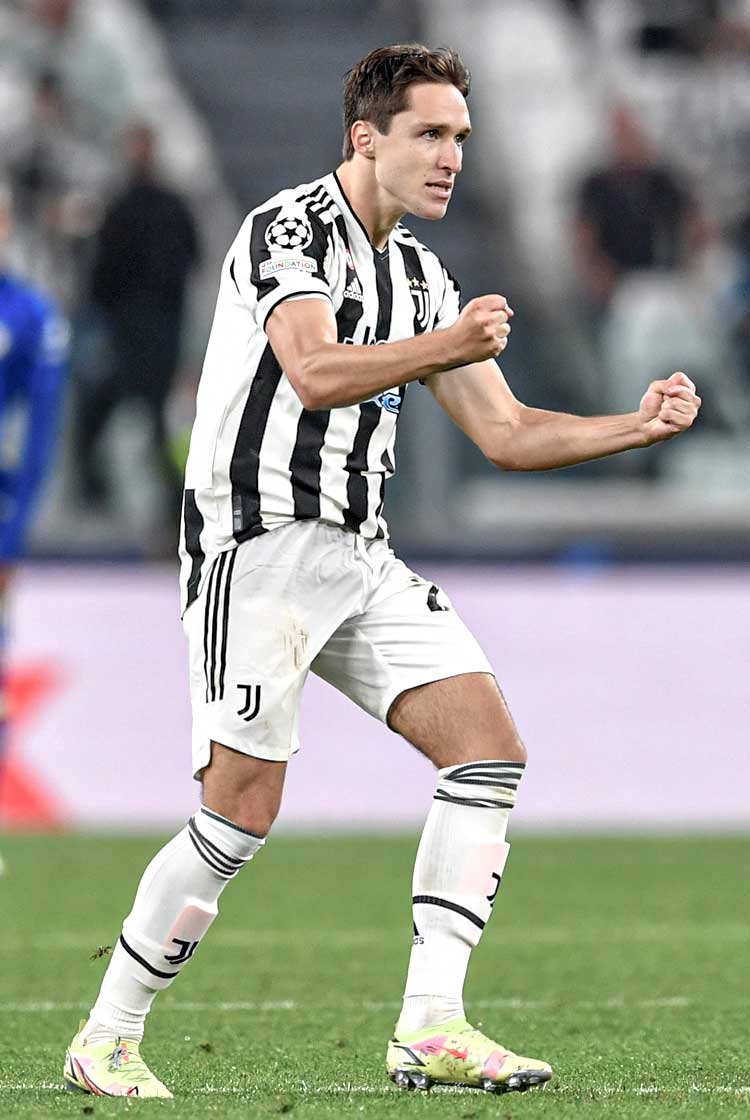 Reigning European champions Chelsea fell to defeat at Juventus after a fine defensive display from the Italians. Juventus took the lead just 11 seconds into the second half through Federico Chiesa – a goal Chelsea manager Thomas Tuchel later desrcibed as “cheap” – before dropping back into a low block to defend their advantage. Chelsea's expensively-assembled attack could find no way through, and Massimiliano Allegri's side took all three points to go clear at the top of Champions League Group H. “Technically we could have played better,” Allegri said afterwards. “But we suffered a bit and we missed a couple of counter-attacks. Two games, six points, zero goals conceded, another step towards qualification, a good step forward.” Tuchel was disappointed with elements of his side's display. “I felt we were a bit slow and tired, mentally slow in our decision making,” he said.

Juventus were set up by Massimiliano Allegri in a 4-3-3 attacking structure, and they came up against Chelsea’s 5-2-3 mid-block defensive shape. Hakim Ziyech moved into the centre as a defensive number 10 behind Romelu Lukaku and Kai Havertz to cover Juventus’ single pivot, Manuel Locatelli. Jorginho and Mateo Kovacic, as Chelsea’s double pivot, held their positions to occupy Juventus’ two number eights.

With Juventus tending to show play into the centre of the pitch where they pressed, whenever they regained the ball the front line and central midfield were very compact. When they counter-attacked, they had a narrow set up, and looked to use the pace of the wingers through the inside channels around the outside of Chelsea’s three centre-backs. However, they often attacked underloaded, and they struggled to assert themselves deep in opposition territory. Chelsea’s three centre-backs dominated in the air when Juventus attacked with direct balls and the defensive midfielders in front of them were ready for any second balls.

During the rare moments when Juventus built up in a slower manner, Rodrigo Bentancur dropped alongside Locatelli to form a double pivot, increasing the passing options behind Chelsea’s front line pairing. Centre-forward Federico Bernardeschi then dropped into midfield, while right winger Juan Cuadrado moved into a narrow position. Federico Chiesa then moved across the front line, attacking centrally to threaten the space in behind Chelsea’s back three. With one of Chelsea’s double pivot following Bentancur, and Antonio Rüdiger then pressing into midfield to cover Bernardeschi, Juventus found some joy in looking for Chiesa’s runs into the space Rüdiger vacated on Chelsea’s left.

Juventus took the lead moments after the second half restarted, as a direct ball was flicked into Bernardeschi, who then put Chiesa in behind to finish first time as he ran across goal. Chiesa remained as Juventus’ highest threat throughout the game, and they defended in increasingly deep territory but remained ready to counter-attack. Bernardeschi pushed forwards from his central position where possible, but Juventus’ counter-attacking was relatively limited for the rest of the game, with Cuadrado dropping deeper to defend.

In the moments where Cuadrado could did break forward, Juventus looked to release him or Chiesa following Bernardeschi dropping into a withdrawn, central position. However, due to the depth of their low-block defending, Juventus failed to put together any further noteworthy attacks.

Chelsea were set up by their manager Thomas Tuchel in a 3-4-2-1 formation when in possession, while Juventus initially defended with a 4-1-4-1 mid block. The hosts’ two number eights – Adrien Rabiot and Rodrigo Bentancur – pushed forwards to press Chelsea’s double pivot, with wingers Federico Chiesa and Juan Cuadrado pressing from out to in, often moving out to press Chelsea’s widest centre-backs with what was a very narrow front line. Chelsea’s wing-backs held a very wide position, which proved a key outlet they could use to play around or over Juventus’ pressure. The home side gradually retreated into a lower block as the game wore on.

Chelsea focused on passing into the inside channels when Juventus’ full-backs jumped out to press Chelsea’s wing-backs, Marcos Alonso and César Azpilicueta. Penetrative runs beyond the Juventus defence from number 10s, Hakim Ziyech and Kai Havertz, helped Chelsea progress into dangerous areas, where they then looked for early crosses or cut-backs. They also progressed play via diagonal passes from their widest centre-backs into centre-forward Romelu Lukaku, but Juventus adapted their defensive structure in response.

Initially, Juventus’ central midfielders screened passes into the forward line, keeping an eye on forward runs beyond from Havertz or Ziyech. However, this freed up Mateo Kovacic or Jorginho in Chelsea’ central midfield. So, Juventus’ wingers worked back into very deep defensive positions, which subdued their opponents effectively but almost totally nullified their own threat on the transition.

Juan Cuadrado dropped so deep that Juventus ended up in a 5-4-1 with a diamond midfield, which stopped Chelsea finding their way into the inside channels, and forced play out wide. Any resulting crosses were dealt with well by Juventus’ back line.

Chelsea responded by pushing one of their pivots forward to act as a link between the two number 10s. Chelsea's wider centre-backs also pushed much higher to add an extra body in midfield. This gave Chelsea better access to those between the lines, stretching the hosts’ central midfield to open better passing lanes centrally. Juventus dropped into a very low block as the game neared its end.

Chelsea attempted to break through via central combinations, with Ruben Loftus-Cheek as a central number 10 just underneath a front two of Lukaku and Havertz. Ross Barkley then ended the match as a second central midfielder, with Kovacic dropping back as the single pivot. Barkley helped create Chelsea’ best chance of the half with a dribble through the centre of the pitch, before finding Lukaku, who rolled his opponent but shot over the bar.

Despite all of their efforts, Chelsea could not break through the stubborn Juventus low block. Whether using quick, central combinations or wider build up around to cross, they could not find a way through.