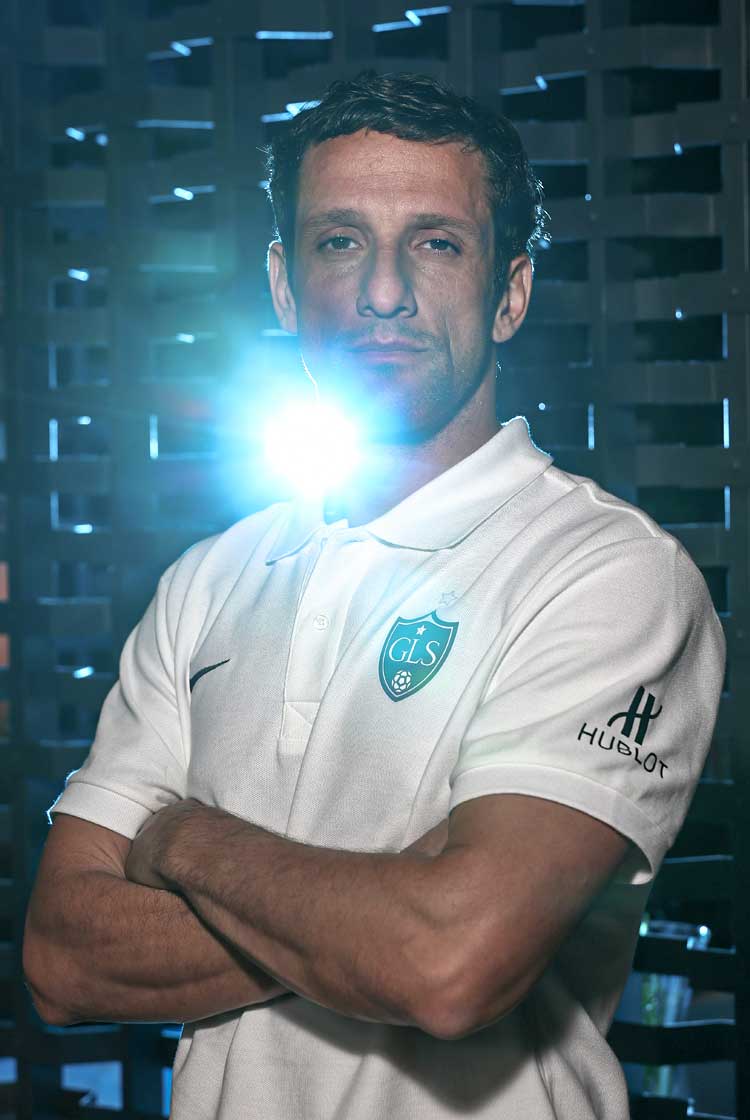 That match in Paris is never far from my thoughts.

In the 34th minute of the second half, I passed the ball to Henrik Larsson, who took a touch towards the corner flag. His marker, Sol Campbell, followed him. So did other Arsenal defenders, who were covering behind Campbell.

That left a huge space, and one of football's magical moments took place: two players thought the same thing at the same time.

I ran into that space, imagining that Larsson might think to control the ball and play me in. That's exactly what happened. It was raining a lot at that moment of the match. The ball picked up speed, but I could still control it with my left foot.

The ball went a little too far forward. I had practically no angle left, and Mathieu Flamini was hot on my tail, ready to make a sweeping tackle. There was no other option. I had to shoot (above).

I fell to the ground after finishing. When I realised the ball had gone in, I stood up to celebrate, but it didn't work. I got overwhelmed with emotion. In disbelief, I brought my hands to my face and collapsed again, trying to take it all in. Suddenly, a mountain of humans piled on top of me (below).

Those were unforgettable moments.

I played in six Champions League campaigns. That goal in the 2006 final, which Barcelona won 2-1 against Arsenal, was my only one in the competition.

"i became the guy who scored the goal that won the champions league. people expected more"

I had the privilege of playing for Barcelona for three seasons. That was my only official goal for the club.

Arsenal had had a player – Jens Lehmann – sent off in that final, but we had still gone 1-0 down. It didn't cross my mind that I would play such an important role in the match. After all, until the 60th minute, the coaching staff hadn’t even asked me to start warming up.

But then Oleguer, who had started at right-back, got a yellow card. That's what changed Frank Rijkaard's planning. I came on with about 20 minutes to go. Rijkaard's instruction was clear: “Be offensive. We need to attack down the flanks.”

There were many moments during that season when I was on the bench. And I often asked the coach if I should be more defensive when I did get an opportunity to play.

“No! I want you to play your way,” said Rijkaard. "Be a Brazilian right-back!"

I always took my defensive responsibilities seriously but, at the same time, I liked to attack. I enjoyed being a secret weapon in attack.

At the moment of the substitution, I remembered those conversations. The spirit of the Brazilian right-back, which Rijkaard had asked for, led me to the goal.

Arriving back in Barcelona the following day left me in no doubt about the importance of our achievement (below). The reaction of the fans when they saw me was unforgettable. I'd never been responsible for anything like that goal before.

"I didn't let any obstacles get in my way; it was a chance I couldn't let pass me by"

I was about to turn 30, and I'd never experienced anything like it. My career had always been about playing for the team – helping the best players on my team. Suddenly I found myself in the middle of the crowd, as if I were the star of Barcelona.

That goal allowed me to experience something unimaginable until then.

After the celebrations, I realised how the goal would transform my career. Not in the way I approached my job – that didn't change – but in the way people, fans and journalists looked at me. I became the guy who scored the goal that won the Champions League. They expected more from me.

The following season turned out to be my last at Barcelona. I had just renewed my contract, and I thought I would stay at the club for many years. But I was no longer getting as many minutes as I would have liked. Gianluca Zambrotta was the starter, and Oleguer still played at right-back from time to time.

Despite that, in pre-season for the 2007/08 campaign, I stood out. I was close to regaining my place in the team.

Suddenly, overnight, I heard about Chelsea's interest. José Mourinho wanted me. That's the kind of thing you can't pass up. I didn't let any obstacles get in my way; it was a chance I couldn't let pass me by. Playing in the Premier League, living in London, working with Mourinho and wearing the Chelsea shirt.

"Leading is hard work, But Ancelotti made it look easy"

It proved to be the right decision; I was very happy in England. Chelsea had a great team, and I enjoyed a successful period at the club. I also worked with great coaches over the years that I wore that famous blue shirt.

Mourinho hardly ever repeated training sessions. He was very creative in the art of motivation. After him came Avram Grant, a quieter and more observant manager. Then Luiz Felipe Scolari (below) arrived, with his own unique way of motivating the players.

All these coaches had exceptional ability.

Another one who surprised me in a positive way was Guus Hiddink. The confident way he talked to the players was fascinating. He knows how to convince a group of his ideas.

We're talking about elite football, where the level is very high. So, the technical part of the game – the player already has it. Often, it is more important to find a way to keep him focused on training and motivated to keep on achieving new goals.

In my last season in London, I worked with Carlo Ancelotti (below). He was the coach I spent the most time with at Chelsea. His ability to keep training exciting with new tactical exercises, and to manage the squad to keep everyone integrated, feeling like an essential part of the project, was incredible.

Leading is hard work. But Ancelotti made it look easy.

"Belletti, you're wasting your time. You were one of the most tactically astute players I had"

I learned a lot during my three years in English football. It was an extraordinary time. To be honest, I achieved much more than I could have imagined. I also got to know fantastic coaches and players.

I've already named a few managers I worked with in Europe, but I cannot forget to mention some great leaders I had back in Brazil: Carlos Alberto Parreira, Mário Zagallo, Levir Culpi, Ênio Andrade, Muricy Ramalho, Carlos Alberto Silva, among others.

The funny thing is that, during my time as a professional footballer, the idea of becoming a coach did not actually cross my mind. I stopped playing in 2011, and it took me about eight years to decide to take the step.

Carlo Ancelotti had a big influence on that decision. In 2019, we met by chance in the United States. He was Napoli manager, and I was an ambassador for Barcelona. The teams played a pre-season friendly in Miami. After the game, I went to the dressing room to see him.

Ancelotti looked at me and asked if I had already become a coach. I said no, but I couldn't even finish my explanation.

“Belletti, you're wasting your time,” he said. “You were one of the most tactically astute players I had.”

Those words lit me up. It was another decisive moment in my career. I left the dressing room determined to become a manager.

Long before that conversation with Ancelotti, I had already taken the CBF's A-Licence coaching course. But I did that course intending to become a better football commentator, a job I did for four years.

"Luxemburgo and his assistant were sent off. I was next in line, so I had the chance to lead the team in the next match"

When I did tactical analysis on television, I realised I had a lot of passion for interpreting the game. And I heard from lots of people that I managed to convey my ideas clearly. My father, who was immensely proud of my football career, would always tell me: “You have to find a way to pass on the knowledge you have.”

I looked for several ways to do it in this long hiatus between retiring as a player and deciding to become a coach. One of them was the creation, in my country, of Arena Belletti, a franchise network of sports complexes.

The project includes the Belletti Soccer Academy, with categories ranging from Under-5 to Under-17, and then an 'evolution' section for adults.

I designed the training programme for the children. We want the teachers to understand that the application of skills is more important than the drills they do with the kids.

At the football academy for the adults, the training sessions are basically identical to those I experienced at Barcelona and Chelsea.

Recently, I had the pleasure of returning to the club where I made my professional debut as a player.

At first, Cruzeiro invited me to be the director of international business. Then they proposed a change of role. I would become one of the club's assistant coaches.

I accepted it immediately.

"Today, as a coach, I don't dream of recreating those emotions. What I do is work hard to lead great clubs and players"

After all, I was looking to get out on the grass again. It was a great learning experience working with professionals like Felipe Conceição, Mozart and Vanderlei Luxemburgo.

Under Luxemburgo, something unusual happened. There was a match in which he and his first assistant, Maurício Copertino, were both sent off. I was next in line, so I had the chance to lead the team in the next match, against Vasco da Gama.

All the planning, strategy, system – everything – was of course decided by Vanderlei. But the feeling of being on the bench was enough to tell me what I wanted. I felt comfortable. I was convinced that my future was leading in the dugout.

Up to this point, I have taken a slow and steady approach. I've studied. I've spoken to many coaches, and I've been an assistant. Now I'm ready for the next step: to become the head coach of a club. I don't know if it will be in Brazil or abroad, but it's the correct next step in my journey.

A manager should adapt his ideas to the squad he has on his hands. I don't believe that the exact same methods would work in two different teams.

Adapting to the context is as important as having conviction. A good coach creates tools and strategies to take advantage of what he has at his disposal. A good coach is always looking for a way to win.

Today, as a coach, I don't dream of recreating those emotions. What I do, though, is work hard to have the opportunity to lead great clubs and great players.

So, who knows? Maybe one day I will be able to relive another special moment that will last forever.