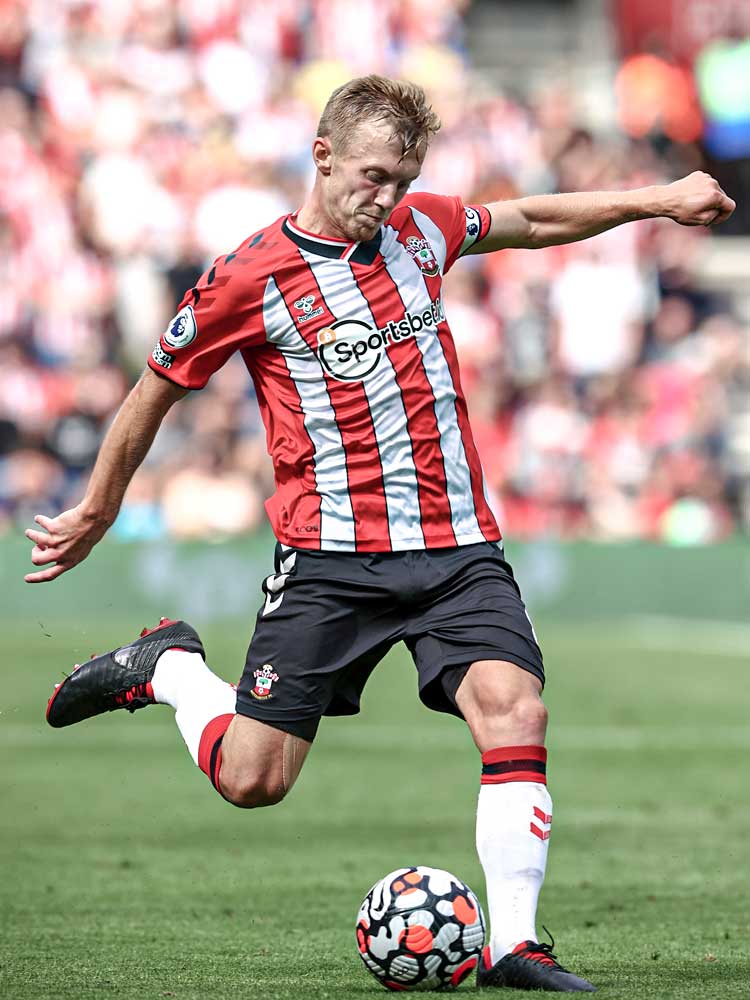 Profile
James Ward-Prowse is yet another player on a very long list of Southampton Academy graduates to make it at Premier League level. He hasn’t been sold for big money like so many of the club's other youth products, but there is an argument that he is the most successful of all. Ward-Prowse, who has been at his boyhood club since the age of eight, has made more first-team appearances for Southampton than any other player to come through their academy.

Since his debut at 16 in 2011, Ward-Prowse has played under seven different permanent managers, yet it is as part of Ralph Hasenhüttl’s high-octane team that he has come into his own and earned the captain’s armband. “He is one of the best midfield players in the Premier League,” Hasenhüttl said. “He is not only fantastic at free-kicks, but he also displays a massive workload every game. He can run more than any other player. He is robust. He is gifted. He is technical. He is very, very smart.”

Tactical analysis
Ward-Prowse is a technically gifted player with a vast passing range, vision, and the ability to play high-quality final balls to attackers. In the earlier stages of his career that meant he was a useful midfielder when his team were in possession, but he also needed support behind him. He was often shunted to the right side of midfield as managers tried to make best use of his exceptional crossing.

In his mid-20s, however, he has added defensive intelligence to his game, improving his awareness to the extent that he can play as part of a two in central midfield. He is a more complete midfielder who provides attacking threat, defensive solidity, creativity, and passing ability all at the same time. He has clearly worked extremely hard – as he does on the pitch – to add to his game, and it has been no surprise that he has become a regular fixture in the England squad. Gareth Southgate has shown a preference to play with two in midfield and, alongside Jordan Henderson, Kalvin Phillips and Declan Rice, Ward-Prowse is one of very few English midfielders who can do that and provide forward thrust with powerful, supporting runs as well as defensive cover.

However, Ward-Prowse is most comfortable coming deep to look for the ball, and he is progressive with his passing once he receives it. He often looks for a quick, direct ball forward to runners in behind, or passes to an attacking midfielder between the lines with a swift, vertical delivery. It isn’t generally in Ward-Prowse’s game to move to between the lines to receive the ball himself, and it is rare that he ever moves ahead of the ball. Instead, he sparks attacks into life with daring passes.

When play is being built with longer passing sequences, Ward-Prowse can ignite an attack with his exceptional crossfield passing to find a runner from deep – usually a full-back or a winger making a run in behind (above). To get into a position underneath the ball and in space to receive facing forwards he times his movement cleverly; that movement can create opportunities for first-time through balls to be played through the middle of the pitch by him drawing a central opponent out of position and a teammate identifying a chance to run through on goal.

Without the ball he is an aggressive presser, and capable as either the first defender to engage the ball or as part of the second wave that supports the first line of the press. He defends on the front foot, and despite his relatively modest stature is able to compete physically with most opponents. His assertiveness means he can both secure loose balls and dispossess opponents with tackles; in that sense he is an ideal holding midfielder. A potential weakness, however, is that his aggressive approach can be exploited by a sharp opponent who jinks away from his sometimes over-eager attempts to win the ball (below).

His dead-ball ability is regardless comparable with the best; he has worked on his technique since a very young age, having studied the likes of David Beckham when he was growing up. He achieves real whip on his crosses, making them inviting for teammates to attack, and he is capable of getting the ball up and down with accuracy from free-kick attempts on goal. The power he gets on his shots is impressive, but what stands out more is how much he kicks across the ball to generate the spin needed to curl it away from the goalkeeper and ensure it dips after going up over a wall (below). He uses a similar technique at corners, meaning his crosses have pace on them and often just need guiding towards goal. The player who attacks it often doesn’t need to generate much extra power on their header.

Role at Southampton
Ward-Prowse is integral to the way Hasenhüttl wants his team to set up. They defend in a 4-4-2 formation, with Ward-Prowse in a midfield two alongside the more defensive-minded Oriol Romeu, and they break at speed at attacking transitions. Their front two split to run into the channels and their wide midfielders make runs infield, either into space between the lines or directly towards goal. Ward-Prowse is key to finding the forward runs of those teammates with accurate passes that set them on their way.

His energy in midfield means he can play in a two, through being able to get up and down the pitch to keep up with play. He is also suited to Hasenhüttl’s pressing game, supporting the front four’s press and getting himself into a position to pounce on any passes into midfield if the opposition manage to beat the first line of Southampton’s press (below). His reading of the game and anticipation means he is suited to that role, following up the press and ready to sweep up passes that are misplaced as a result of the pressure their attackers put on defenders. He is consistently among the very best in the Premier League for recoveries – the total number of times a player regains possession – largely due to the fact he is so regularly in the right place at the right time to collect a loose ball.

In possession, Hasenhüttl likes his players to rotate positions frequently, with Ward-Prowse dropping into a full-back position on either side of the pitch, the full-back pushing high, and the wide midfielder – a player Hasenhüttl has selected specifically because they are comfortable in central positions – coming infield to add a body between the lines. Ward-Prowse will look to find either the full-back or the wide midfielder with a pass; it is combinations between those players that help Southampton move up the pitch.

His history as a right-sided midfielder also means he sometimes moves on the outside of the full-back to receive a pass. When he moves wide and does so, the moment he lifts his head to see where his teammates are acts as a trigger for those ahead of him to run beyond the opposition's back line.

Ward-Prowse then looks for their runs with a whipped ball in behind or a drilled ball into the channel (above). Southampton are not afraid to play direct balls forward as they have so many willing runners in attacking positions – and Ward-Prowse is key to that tactic.

He has developed from something of a luxury player into a genuinely top-class midfielder who provides the foundation for his team’s attacks with his passing, but one who is also both tenacious in his tackling and positionally aware. Hasenhüttl is right – Ward-Prowse is a wonderfully balanced, complete midfielder, and he is among the best in the Premier League.