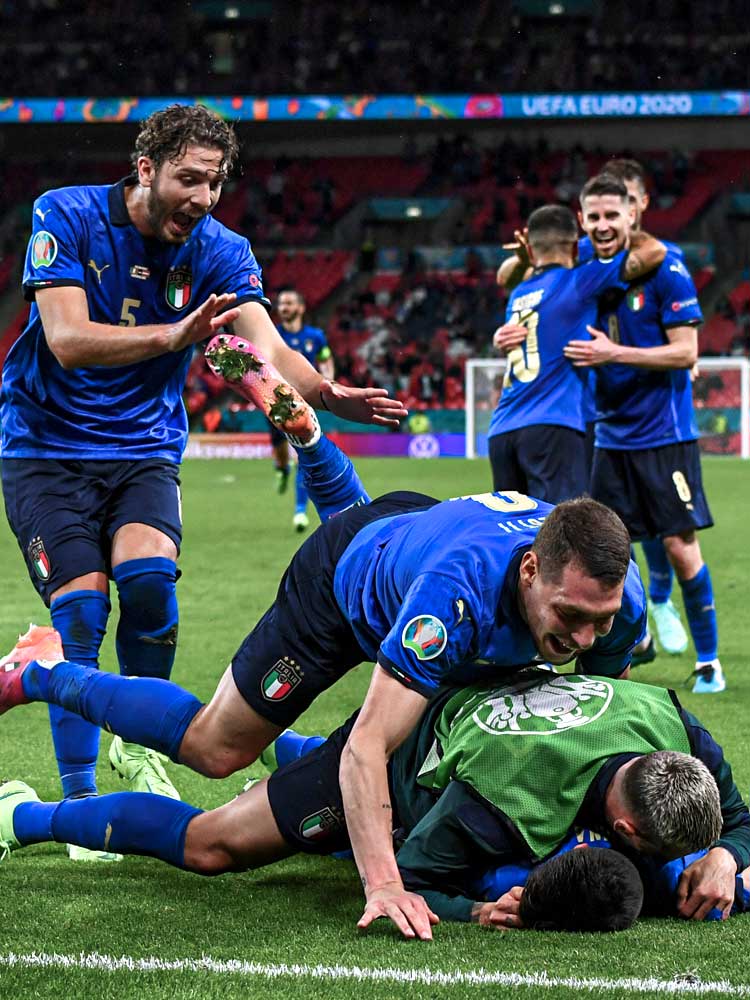 After storming through the Euro 2020 group stage with three wins from three, Italy were made to wait until extra time to find a way past the impressively dogged Austria in their round-of-16 match at Wembley. Both teams remained goalless at the end of 90 minutes – Marko Arnautovic had come closest to scoring in normal time when he had a goal ruled out for a marginal offside call from the Video Assistant Referee. As their evening wore on and fatigue started to have an influence, Italy manager Roberto Mancini changed what was unfolding with his substitutions; Federico Chiesa and Matteo Pessina came off the bench to score the goals that sent Italy into the quarter finals. “The fact we have players who can step up and change the game on the bench is a major advantage,” Mancini said. His opposite number, Franco Foda, said: "We can all be proud of our performance over 120 minutes. We were close to reaching the quarter finals against one of the title favourites."

Italy set up in a 4-3-3 formation in possession. Giovanni Di Lorenzo, Leonardo Bonucci, Francesco Acerbi and Leonardo Spinazzola formed their back four; Nicolò Barella, Jorginho and Marco Verratti were in midfield, and Domenico Berardi and Lorenzo Insigne flanked Ciro Immobile in attack. Austria initially defended in a 4-5-1 but changed to a 5-3-2 in response to Italy’s positioning. Konrad Laimer, Stefan Lainer, Aleksandar Dragovic, Martin Hinteregger and David Alaba formed their defensive line of five.

Italy looked to build from the back with a first line of three players – Di Lorenzo, Bonucci and Acerbi. Spinazzola pushed up high and wide from left-back to play more like a winger and to provide width on the left, the main cause of Austria switching to a 5-3-2, and Laimer moving back.

Centrally, Italy used Jorginho and Verratti in deeper central positions and Barella in a more advanced role on the right side of central midfield. Jorginho and Verratti playing deeper meant they could take the ball and dictate play while also providing security against counters in the event of a turnover. Austria’s intention was to restrict play through the centre of the pitch, and they looked to maintain compactness while directing Italy’s play into the wide areas, moving across as one unit as the ball was transferred from side to side.

Austria occasionally pressed Italy high up the pitch, via Marcel Sabitzer marking Jorginho and Marko Arnautovic trying to force play out to Italy’s right, where Christoph Baumgartner waited, ready to press Di Lorenzo when the ball was played to him. Florian Grillitsch moved across to affect Barella, and Xaver Schlager picked up Verratti. Naturally, Italy responded via Berardi dropping into deeper positions and Immobile or Insigne moving away from goal to receive between the lines. Austria were happy for Dragovic or Hinteregger to follow the Italian players when that happened, however.

Italy looked to threaten in behind Austria's defensive line by sending passes from deep for a forward to run on to. The timing of those runs was generally good, but their passes lacked consistency and accuracy, and Daniel Bachmann was relatively untroubled.

Owing to Austria’s compact defensive shape, Italy used a five-point attack, comprised of Spinazzola, Insigne, Immobile, Berardi and either Barella or Di Lorenzo, as much as possible. Doing so offered good coverage of the width of the pitch, and would either stretch Austria's compact shape and create gaps centrally to play through, or offer good options to switch play – as they demonstrated with their opening goal five minutes into extra time.

Austria manager Franco Foda did not make a change until the 90th minute, despite the fact that his players had to work extremely hard, when out of possession, throughout. In contrast, Roberto Mancini’s subs came earlier in the game, and injected fresh energy into the Italians against tiring opponents. Both of Italy’s goals came from players introduced from the bench in the second half.

Austria set up in a 4-3-3 formation in possession with Stefan Lainer, Aleksandar Dragovic, Martin Hinteregger and David Alaba forming their back four. Florian Grillitsch, Xaver Schlager and Marcel Sabitzer were in midfield, and Konrad Laimer, Marko Arnautovic and Christoph Baumgartner formed their attack. Italy defended with a 4-3-3.

Austria looked to build from the back and, where possible, to play through Italy. Grillitsch would often look to receive the ball from their centre-backs and would occasionally drop to between the two of them so that they could build with a back three. Sabitzer and Schlager were often joined by an attacker in midfield as they sought to overload Italy’s.

The Italian midfield dealt well with the players in front of them but, for large parts of the game, didn’t defend the space behind them particularly well, which meant Austria regularly broke their midfield line with passes to their front three or between the lines to Sabitzer or Schlager. As the game progressed, Italy responded and reduced those spaces, so it became harder for Austria find players in central areas.

Austria posed an occasional threat on the counter, particularly in the first half, but Italy recovered to defend against them before they became too much of a concern. Austria consistently struggled to create clear shots on goal. Out of 16 shots, only three were on target, and Gianluigi Donnarumma wasn’t tested to a great extent, beyond one good save from Louis Schaub’s effort from outside of the penalty area and him being spared by the Video Assistant Referee when Arnautovic had a goal disallowed.

When Italy were set up defensively, there was little threat to the space in behind their defence, and little was done to disrupt their positioning or compactness. Austria often clipped balls into the area from central and wide territory, but Italy were comfortable in dealing with them. Credit is due to Italy's defenders, who did well to block attempts and to prevent shots from being taken by winning most of their individual duels.