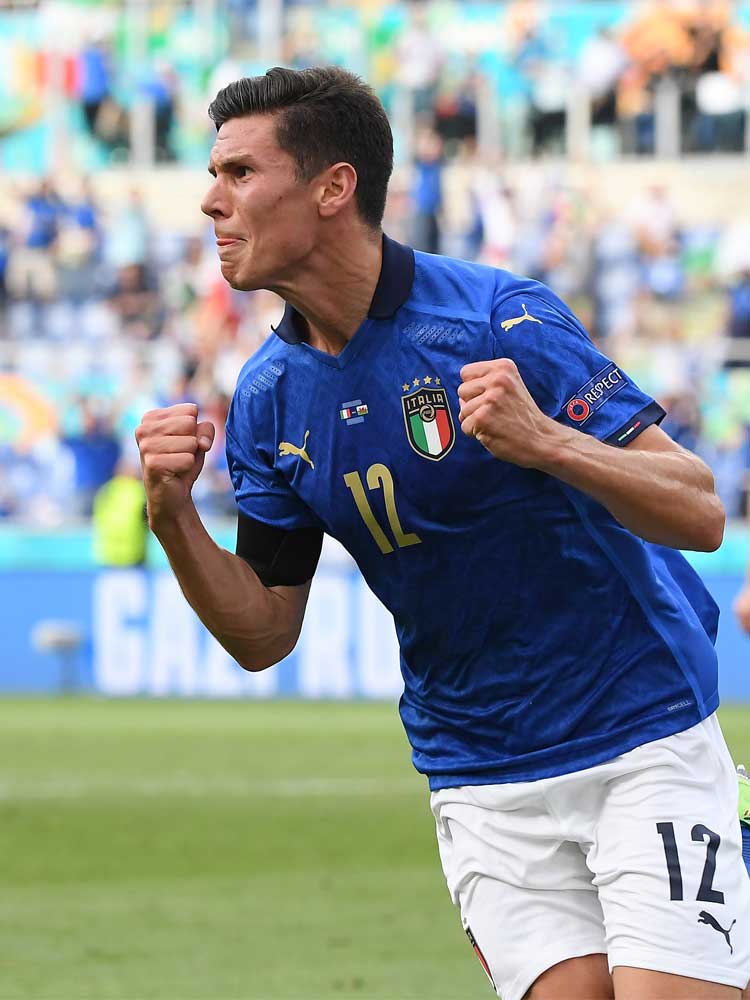 Wales joined Italy in the knockout stages of Euro 2020 despite losing to the Azzurri. Finishing second ahead of Switzerland on goal difference, they resisted intense pressure and the dismissal of Ethan Ampadu to reach the last 16, as they also so memorably did in 2016. Matteo Pessina rewarded Italy's dominance shortly before half-time, but the Italians – who have won three from three so far – will know that they should have won by a wider margin. "After the group stage, it is a new competition," said their manager Roberto Mancini. "We changed eight, but played a very good game.” Robert Page, his opposite number in the absence of Ryan Giggs, said: "I’m really proud of the group and I’m looking forward to the last 16. It’s phenomenal, the character we have."

Italy were organised into a 3-3-4 formation by their manager Roberto Mancini, who after successive victories made eight changes to his starting XI. Federico Chiesa, Andrea Belotti, Federico Bernardeschi and Emerson Palmieri formed their front four, against opponents who defended with a 5-2-3.

It was their goalkeeper Gianluigi Donnarumma, as well as Leonardo Bonucci and Jorginho, who retained their starting positions. Italy largely controlled the first half because of the four-on-three that existed in their defensive third, where Jorginho or Marco Verratti dropped in to contribute to the Italians outnumbering  Gareth Bale, Aaron Ramsey and Daniel James. With Ramsey instructed to follow Jorginho, when it was instead Verratti who withdrew, Joe Morrell had to follow him, leaving a space behind Wales' midfield that Bernardeschi or Matteo Pessina moved into; the wider positioning of Rafael Tolói and Alessandro Bastoni also provided Italy with an outlet when possession was being circulated in defence.

The intelligent movements of  Belotti and Pessina, and the attacking outlets provided by Bernardeschi and Chiesa, provided further options with which to progress beyond Wales' pressure. With Verratti and Jorginho positioned inside Wales' midfield block to draw pressure and increase spaces between the lines, Pessina moved behind Joe Allen and Morell to receive in front of Wales' defence. The Welsh central defenders were discouraged from pushing up by Belotti's advanced positioning and by Belotti and Bernardeschi making runs in behind. Chiesa regularly threatened on the right when one-on-one with Neco Williams, and was supported by Pessina, with whom he rotated to move in behind Williams if Chiesa was followed.

Ethan Ampadu's dismissal actually led to increased rotations between Chiesa and Pessina; the latter started in the right half-space, off the shoulder of Allen, and moved wide so that Chiesa could move infield when the ball travelled to Tolói at right centre-back. Wales' numerical disadvantage also meant Italy could create overloads towards the right and left, because of the reduced defensive cover they offered; Emerson or Bernardeschi moved infield behind Bale, and Pessina behind Morrell, forming a box with Jorginho and Verratti – who also increasingly adopted a significantly more advanced position.

In addition to the threat they posed from crosses from the right, Italy offered potential when crossing from the half-space on the left. When moving the ball to the right and drawing Wales' midfielders with them, they then transferred possession back to the left to, as quickly as possible, take advantage of their opponents' loss of shape. They penetrated into the penalty area from the left half-space; crosses from Verratti and Bastoni demonstrated that when they led to goalscoring chances for Pessina and Belotti.

Wales were set up by Robert Page into a 5-2-1-2 formation led by the front two of Gareth Bale and Daniel James. Their opponents, Italy, defended with a 4-5-1 during the rare periods they were without the ball.

Page's team struggled to build possession throughout. They attempted to make short passes towards one side of the pitch before transferring it and clipping it wide to the wing-back on the other, but though doing so occasionally led to possession being progressed to Wales' three most advanced players, it was more common for Italy to win the aerial duels and then capitalise on winning the ball by playing an aerial pass.

Ethan Ampadu advanced from central defence into midfield to create a two-on-one against Andrea Belotti, but Wales struggled to feed him once possession had travelled wide. There were regardless moments in the second half when he had lengthier periods with the ball at his feet, but his red card then left them a player down and shorn of his ball-playing abilities, essentially leaving Wales incapable of building possession.

The introduction of Kieffer Moore as a substitute, and Wales then reorganising into a 4-4-1, meant them successfully reducing the pressure they were under via his ability to secure long balls and win free-kicks. One led to Bale receiving a pass inside the penalty area that might have led to their best goalscoring chance, but he struggled to get the ball under control.