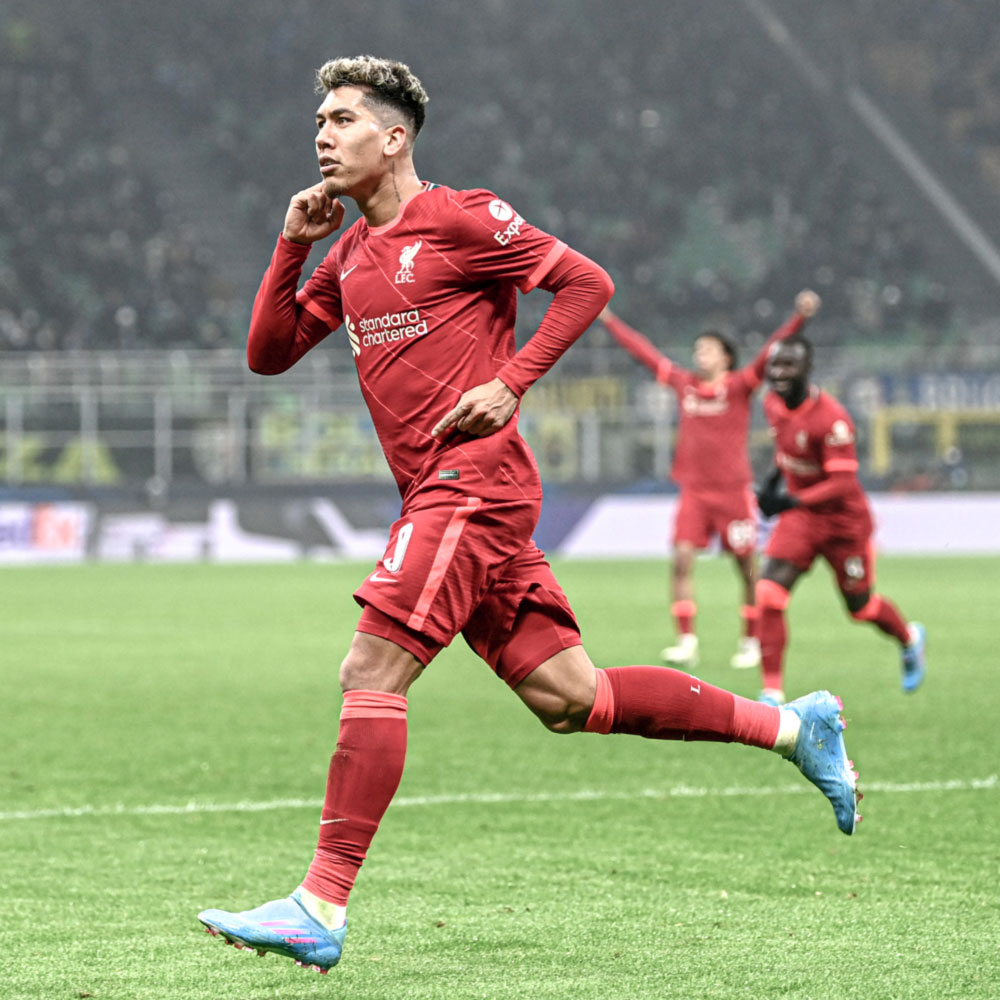 Liverpool registered their seventh straight win in this season's Champions League with a hard-fought victory against Inter Milan in the San Siro. Jürgen Klopp's team had already secured one win in one of football's most iconic stadiums this season, defeating AC Milan 2-1 during the group stages, but they were made to work for their second by an Inter team intelligently set up by manager Simone Inzaghi. Half-time substitute Roberto Firmino finally broke the deadlock with 15 minutes to go, heading in from an Andy Robertson corner. Almost inevitably, Mo Salah struck a second eight minutes later, as Liverpool scored with their only two shots on target and took control of the tie ahead of the second leg in three weeks.

"“It’s still dangerous,” Klopp said after the game. “It’s half-time, nothing else. That’s how it is in the knockout stages. We don’t feel like we’re halfway through. It will be tricky and we have to be ready. It’s 2-0 at half-time. I wouldn’t tell the boys it was job done if it was 2-0 at half-time in any other game here, so I won’t think any different here.”

Inzaghi was pleased with his team's efforts, despite the result. “I am happy and proud of the team," he said. "Unfortunately, during our best period of the game we were not rewarded with the goal we deserved, then Liverpool scored at the first half-distraction we had. Liverpool are one of the two best teams in Europe, in my view – but we held out well and deserved more. We know these evenings can be like this, but it has to give us a self-esteem boost, because it was an excellent performance."

Building in a back four

Simone Inzaghi set his team up in their usual 3-5-2 formation against Liverpool’s equally familiar 4-3-3 defensive structure, with a back three consisting of Alessandro Bastoni, Stefan de Vrij and Milan Skriniar. The visitors pressed high and narrow, so Inter often converted into a back four when building. Midfielders Marcelo Brozovic and Arturo Vidal remained central, almost as a double pivot, while Hakan Calhanoglu drifted left (below) and the back three shifted so Skriniar looked more like a right-back. This allowed Inter to push both wing-backs – Ivan Perisic and Denzel Dumfries – into much higher starting positions, which pinned the Liverpool full-backs deeper and prevented them from covering the wide spaces around the front three. Inter were thus able to exploit these spaces during their build-up play.

Using the back three to penetrate

When Liverpool chose to defend deeper, Inter reorganised into their more recognisable 3-5-2 shape. The midfield trio remained central, with one – here, Vidal (below) – pushing forward to support the front two of Lautaro Martínez and Edin Dzeko where possible. The wing-backs held their high position, often creating a front line of four; the home side then looked for diagonal passes from the back three into these wide areas, which worked to bypass the narrow first two lines of the Liverpool block.

Calhanoglu crashed one shot against the Liverpool bar in the first half, but the hosts enjoyed more dominance in the second half – thanks mostly to their rotations in midfield. Vidal drifted right, enabling Dumfries to push even higher and pin Andy Robertson back (below). Calhanoglu drifted left, but often into the back line; this enabled Bastoni to push on and mirror Vidal’s position on the Inter left, which in turn allowed Perisic to force Alexander-Arnold deeper. Brozovic held his position as the single pivot, looking to receive between the Liverpool lines and progress his team forward.

Leaning to the left

Although Vidal continued to move out towards the right, it was Inter’s left flank that proved the most progressive. Further rotations and combinations between Bastoni and Perisic proved effective when attacking around Alexander-Arnold in the final third, with Calhanoglu always supporting underneath. Inter’s wider movements increased the distance the Liverpool number eights had to cover to press (below), meaning defensive support ahead of the visitors’ full-backs took longer to arrive. Inter worked well to exploit this, but they lacked the crucial final touches in and around the penalty area and ultimately failed to register against a defence led superbly by Virgil van Dijk and Ibrahima Konaté.

Jürgen Klopp set Liverpool up in their instantly recognisable 4-3-3 attacking shape against Inter’s 5-3-2 defensive block. Wide forwards Mo Salah and Sadio Mané took up narrow positions through early movements, while Diogo Jota dropped between the lines. Inter maintained good central coverage, so Liverpool often looked to build around them – but with their wide attackers inside and their central midfield condensed (below), they struggled to gain any significant penetration. Instead, with Jota trying to drag one Inter centre-back out of shape, they proved most effective when playing over and in behind the back line in search of direct runs.

Inter looked to employ an aggressive man-marking system out of possession. To combat this, Jota increased his dropping movements, sometimes bringing Stefan de Vrij all the way into the Liverpool half (below). From here, the visitors looked for direct passes into the spaces in front of the other two Inter centre-backs, and accompanying runs from one of the number eights into the space that Jota had vacated.

Roberto Firmino replaced the injured Jota at half-time, but it was Klopp’s triple substitution on the hour – introducing Jordan Henderson, Naby Keïta and Luis Díaz for Fabinho, Harvey Elliott and Mané – that swung the momentum of the game after a period of Inter dominance. The home side continued to man-mark, but the timing and fluidity of Firmino’s movements into midfield enabled Liverpool to gain central overloads against the Inter midfield three. This forced Inter into a deeper, more compact block that prioritised central areas, which opened up space – finally – for the Liverpool full-backs to advance (below) and support Salah and Díaz in the front line.

Although Liverpool won the game through goals that came from the first and second phase of set-pieces, their attacking structure helped lock Inter into a much deeper block. Trent Alexander-Arnold started to move infield, which allowed Salah to isolate his marker and create space for runs across Inter’s back line. Robertson and Díaz combined well on the left, with Henderson covering underneath as the pivot. Keïta and Thiago were then able to move into more advanced positions between the lines (below), especially with Alexander-Arnold so narrow, where they offered additional support and cover. They also connected well with the influential Firmino, as Klopp’s changes served to help his team secure a vital first-leg victory against difficult opponents.