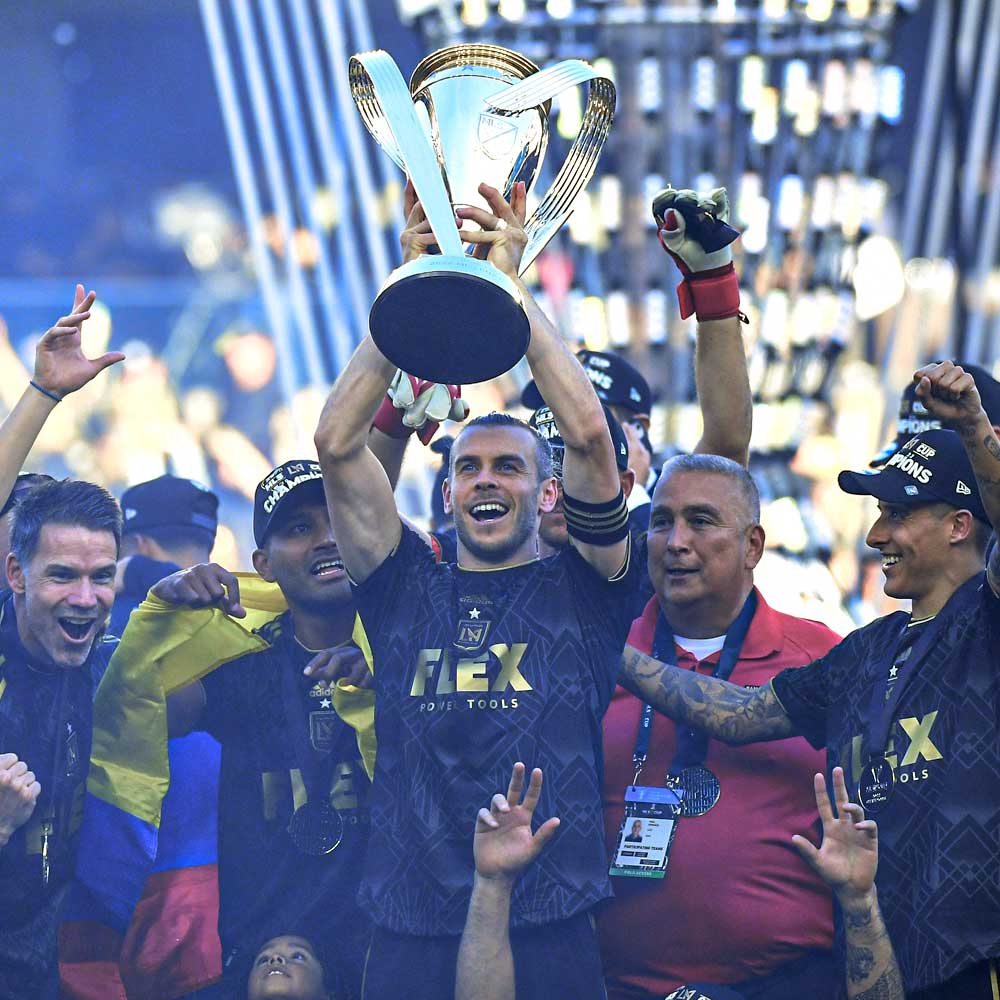 Profile
Gareth Bale’s return to Real Madrid after a season on loan at Tottenham did not quite prove what he needed to revive his career. After a decent year at Spurs in 2020/21, there were some hopes that, under the the management of Carlo Ancelotti, Bale could play an  important role.

It was not to be, though, and while Bale added winners' medals in both La Liga and the Champions League to his already packed trophy cabinet, he barely played in either competition. And so, the end of the 2021/22 campaign brought an understated close to his glittering Real Madrid career, and with it a move to Major League Soccer side Los Angeles FC. In America, Bale quickly added to his three La Liga titles and five Champions League medals, as he helped his new club to the MLS Supporter's Shield, and then scored a dramatic equaliser to send the MLS Cup final to penalties, which LA FC won. He is already among the most decorated British footballers of all time, and there may be a few more years in him yet.

Tactical analysis
It is only natural, when considering what kind of player he is, for the mind to drift back to the hat-trick at Inter Milan in 2010 with which Bale announced himself on the world stage. The reality, however, is that the explosive acceleration and searing pace that defined the eye-catching, early days of his career are no longer quite what they were. Bale has therefore had to adapt his game. He still has a wand of a left foot, and his greatest threat is coming off the right to get into a shooting position. He is no longer able to receive to feet and beat an opponent to create his own shooting opportunities by shifting the ball with the outside of his left foot a few yards infield, so he has had to improve his movement to get into positions to score.

When play moves towards the left, Bale will drift into a centre-forward's position to attack a ball into the penalty area. Though he is not a natural number nine, in that he does not like playing with his back to goal, he does like to join attacks from a wide position and often shows the penalty-area instincts of a true goalscorer. He tends to make intelligent runs off the back of a defender to find space close to goal (below) rather than by beating an opponent in a direct duel for the ball, or by outmuscling a defender. When he does get a good chance, more often than not he finishes it.

He has always liked to move with the ball from wide and into central positions, and he increasingly does so to create with chipped balls towards the back post. However, he does not get much power or whip on those kinds of crosses, and they are too often easily dealt with by opposing defences. He has regardless developed an eye for a through ball as his career has progressed, and is happy to drop into midfield before sliding a pass forwards to a runner in behind (below). No longer the main figure at club level, Bale has had to work hard to add to his team’s threat on goal.

The threat he provides on the ball means that he draws a lot of attention from defenders. He is capable of using that pressure to his team's advantage, by drawing opponents away from their positions for others to make forward runs into, particularly his team's right-back. Bale then offers his opponent a pressing trigger – by receiving with his back to goal, for example – and sets the ball back to a teammate to create an up-back-through movement.

The role Bale played at Tottenham
Bale largely played towards the right of Spurs' attack in an in-possession 4-2-3-1 that became a 4-4-2 when they do not have the ball. Throughout 2020/21 under José Mourinho, a player in Bale’s position had to do a lot of work without the ball; Mourinho wanted his wide attackers to break whenever there was space to attack, but he was extremely wary of his side being left too open at defensive transitions and so did not like committing too many players forwards.

Against strong opponents that meant his wide players having less freedom to advance, and with Bale no longer possessing the fitness to get up and down the wing – like Lucas Moura, Steven Bergwijn, Son Heung-min or indeed the Bale of old – he found it difficult to have quite so much impact in those games. Once one of the best counter-attacking talents in the world, Bale had to find different ways to exert an influence.

Playing from the right, his inclination is to cut infield when he gets the ball, but opponents tend to defend against him with that in mind, leaving more space on the outside with the aim of preventing him from cutting inside and shooting. The memory of his final season at Tottenham before his move to Real may play a part in that, because Bale scored 21 Premier League goals, nine of which came from outside of the penalty area. His tally of nine long-range goals in 2012/13 still remains a record by any player in any Premier League season before or since; opponents are thus reluctant to let him have any sight of goal on his left foot, no matter how far out.

Instead of taking a touch across a defender and bursting past them as he used to, when moving on to his left foot, Bale instead takes those touches diagonally away from goal. Doing so makes it easier to retain possession as there is less immediate threat on goal, so defenders put less pressure on the ball – but it did mean he was then facing away from goal, and his next action was often a pass to the right-back or a central midfielder rather than a progressive one. He sometimes attempted crosses from those positions, but they could be difficult to execute.

Bale has therefore had to work on going around the outside and crossing with his right foot, which was not previously a particular strength. He has improved significantly in that regard, though, and has had some success after working the ball on to his right. After a run of games and plenty of time to get sharp again, Bale proved he still has the five-yard burst of pace needed to create space to put a cross in, and his delivery with his weaker foot was adequate.

When further from goal, Bale’s ball-striking ability was useful in playing long balls either to switch play or to play teammates in from deep (above). After cutting on to his left foot from the right, he accurately switched play with a low-trajectory ball across the pitch. Quick switches of play were vital to stretching opponents, and complemented Harry Kane providing long, raking balls forwards for Son to chase. Bale played more of a wide quarter-back's role when he dropped deep, and when he did so, Spurs were able to commit Kane further forwards and therefore have an added element to their attack. Perhaps crucially, there was also less pressure on Kane and Son to score or create every goal.