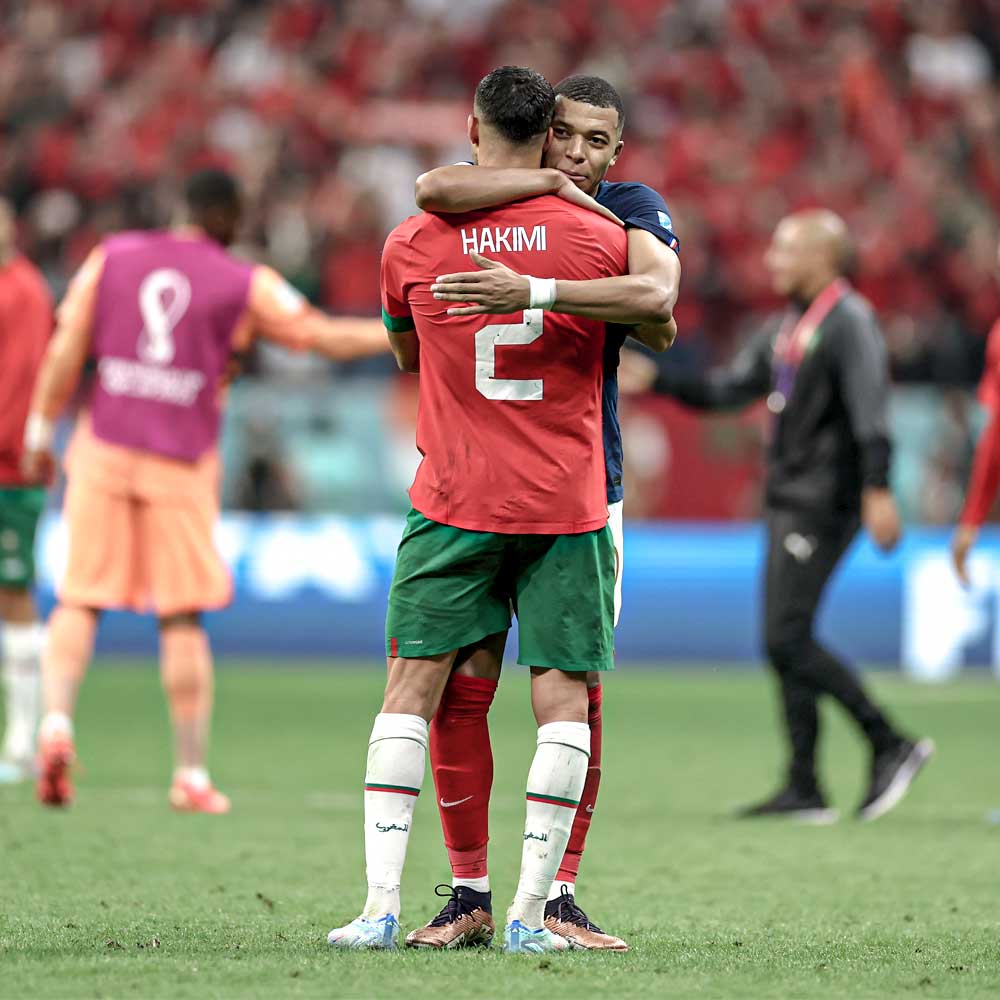 Defending world champions France made it to a second consecutive World Cup final – and their fourth overall – with a hard-fought win over an enduringly impressive Morocco at Qatar’s Al Bayt Stadium. Didier Deschamps’ men were quick out of the blocks, with Theo Hernandez taking advantage of rare uncertainty in the Morocco defence to finish athletically after only five minutes. Despite losing captain Romain Saïss to injury midway through the first half, and then star left-back Noussair Mazraoui at half-time, the Moroccans always carried a threat. They came close to equalising when Jawad El Yamiq saw his overhead kick tipped on to the post by France captain Hugo Lloris. It wasn’t to be for the first African nation ever to reach the last four of the World Cup, however – France substitute Randal Kolo Muani tapped home 44 seconds after coming on, after some typically excellent work by Kylian Mbappé, to secure his team a meeting with Lionel Messi and Argentina in Sunday’s final.

“It’s never easy, but it’s been such a joy,” said Deschamps, who is now one win away from joining Vittorio Pozzo in a very small club for coaches who have won two World Cups, after the game. “We’re going to go after the title on Sunday. We’re going to enjoy the time. I tell this to my staff and players. Take every moment in the day to really appreciate and savour the moment. In four days, we are going to play for a world title.”

“At a World Cup this was perhaps one step too far,” said Morocco head coach Walid Regragui. “Not in terms of quality or tactics, but physically we came up short tonight. We had too many players at 60 or 70 per cent. With all our squad fit, we could have caused them a lot of problems.”

Griezmann between the lines

Didier Deschamps set his France team up in a 4-3-3 shape with the ball. Aurélien Tchouaméni started as a single pivot behind Antoine Griezmann and Youssouf Fofana, who played as number eights in the inside channels. Kylian Mbappé and Ousmane Dembélé held the team’s width, and were supported underneath by full-backs Jules Koundé and Theo Hernández. With Morocco set up in a 5-4-1 defensive block, France looked to penetrate centrally through line-breaking passes. Koundé and centre-back Raphaël Varane in particular looked to find Griezmann between the lines (below) – and it was a superb roll to receive in behind from Griezmann that ultimately led to Hernandez’s opener in the fifth minute. Another error in the usually rock-steady Moroccan defence led to a chance for number nine Olivier Giroud, but his effort struck the outside of the post.

France’s mid-block created counter-attacking opportunities that focused on exploiting the wide areas, especially as the injury to Romain Saïss forced Morocco to switch to a back four midway through the first half. The full-backs jumped out into an aggressive press, with one of the central midfielders then covering them as they did so (below). Upon a regain, France immediately and inevitably searched for Mbappé, who was often the highest attacker when Morocco had possession. Dembélé drifted inwards from the right, as Griezmann dropped deeper to cover for whichever central midfielder had dropped to cover the full-back. As a result, France relied heavily on their left side in attack, with Mbappé’s pace a constant threat.

Changes to the front line

Deschamps moved to replace Giroud with substitute Marcus Thuram midway through the second half. Thuram operated on the left of the front three, where he had the responsibility of limiting the dangerous Achraf Hakimi’s attacking runs on the Morocco right, while also bringing fresh legs to any French counter-attacks. Mbappé moved into the centre (below), where he still offered a constant transitional threat whenever France regained the ball deep. Griezmann’s defensive output alongside Fofana’s covering helped France remain compact and resilient in their own half, from where they then looked to release the pacy front trio upon any regain. The defending champions grabbed a second when Mbappé’s deflected shot landed perfectly for substitute Randal Kolo Muani, who had been introduced for Dembélé less than a minute earlier. Ultimately, it was this quality in the final third, from the relatively few chances they created, that saw France through to a fourth World Cup final in the last seven tournaments.

Effective movements down the left

Morocco initially set up in a 5-4-1 structure, but they converted into a 3-4-3 once they progressed towards the final third. Movements on their left side helped break through France’s block, with runs from central midfield through the left inside channel (below) working particularly well. Wing-back Noussair Mazraoui was aggressively pressed by Jules Koundé, and Sofiane Boufal’s forward runs were tracked by one of France’s deeper central midfielders. Penetrative runs from Azzedine Ounahi then helped break into the final third, as he exploited the space that was created by his teammates’ movements.

Change to a back four

Morocco converted to a back four after Romain Saïss was forced off through injury and with France having taken an early lead. Selim Amallah was added in attack, and he dropped away from the France centre-backs into midfield, which allowed Sofyan Amrabat or Ounahi to drop alongside the two centre-backs if needed. Morocco’s left side continued to rotate well, while the width on the right was provided by winger Hakim Ziyech (below). He dribbled back inside onto his stronger left foot to cross, shoot or combine, and right-back Achraf Hakimi took up a narrowed position inside – probably with Mbappé’s threat on the transition in mind. However, despite their dominance of possession in the first half, Morocco’s best chance actually came at a corner, when Jawad El Yamiq hit the post with an acrobatic overhead kick.

Morocco also lost left-back Mazraoui to injury, which meant they were severely weakened down that flank. They started to focus more of their attacks down the right as a result, and they began the second half on the front foot, with their moves down the right looking especially promising. Hakimi and Ziyech helped progress into the final third (below), but they were let down by the detail of their final ball across goal on several occasions. Morocco took advantage of the fact that Mbappé did very little defensive work, but France’s talisman was happy to stay high up the pitch with bigger spaces to exploit on the transition. Morocco looked even more dangerous when Ounahi came across to the right from central midfield to join in with the close combinations around Theo Hernández and Ibrahima Konaté. France defended the width of their six-yard box really well, and even cleared one shot off the line in added time. Morocco had the better of the second half, and at times it certainly didn’t look like France were the reigning champions and Morocco the brave underdogs.

Due to the success Morocco were having down their right side, France were forced deeper and deeper as the second half wore on. Youssouf Fofana was forced to cover in the inside channel and help Hernández out on this side (below). This helped protect Konaté and reduced the frequency with which Morocco penetrated into the penalty area on this side of the pitch. Antoine Griezmann dropped deeper with Aurélien Tchouaméni, and even Olivier Giroud and Mbappé were forced into much deeper positions than they would have liked. Deschamps eventually pulled off Giroud – who is not a counter-attacking threat – and brought on Marcus Thuram. Morocco piled forwards but just could not grab they goal they deserved, and they were hit by a late France sucker punch on the counter to end their World Cup dream.