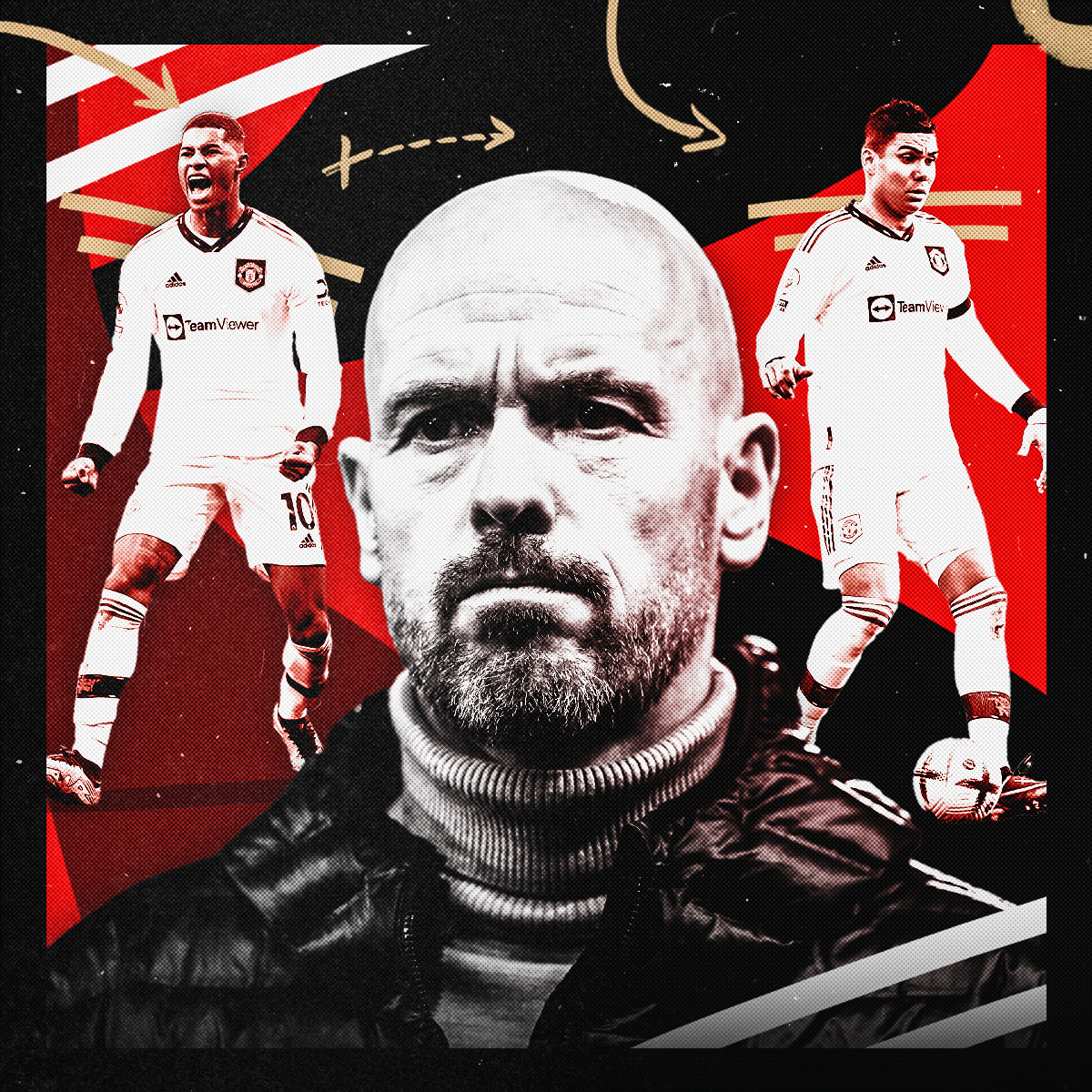 Defeats to Brighton and Brentford to kick off Erik ten Hag's Old Trafford reign back in August hinted at the size of the job facing Manchester United's new manager. After those results, with the team bottom of the Premier League, many wondered if the Dutchman was up to such a big task, particularly given this was his first foray into one of Europe's top five leagues. His impressive work at Ajax had earned him the top job at United, but this was a giant of football that had been lacking direction ever since Sir Alex Ferguson retired in 2013.

Five months into his first season at the club, however, United are in the top four and only four points off rivals Manchester City in second as we approach the midway point of 2022/23. They are still fighting on four fronts, and Cristiano Ronaldo has been moved on. This is a team looking like Ten Hag has stamped his mark on it.

So, what exactly has he changed, and what's working in particular? Here, we look at five improvements Ten Hag has made in his short time at United.

Casemiro has proved an outstanding addition to the double pivot in Ten Hag’s 4-2-3-1, where he has usually been paired with Christian Eriksen. Since the Brazilian’s first Premier League start – against Everton in October – United have only lost one league game. They've conceded only six goals in 10 matches, and three of those came in the 3-1 defeat to Aston Villa. Casemiro ranks sixth in the Premier League for duels per 90 minutes, and 20th for interceptions. By way of comparison, no United player was in the top 30 in the league for duels or interceptions in 2021/22. His impact cannot be underestimated.

Casemiro's ability to break up play, hold up opponents and delay their progress, protect the centre of the pitch, stop counter-attacks, make tactical fouls, and win the ball back have all made a huge difference to United out of possession. He has a wealth of experience at the highest level, and he shows it in his decisions to move across to cover the inside channels and protect the space on the inside of his full-backs (below).

Something else Casemiro does well is pick the moments to pass his direct opponent on and instead jump out to the ball-carrier. Where others might dive in and get beaten, leaving their centre-backs exposed, Casemiro slows down as he approaches his opponent. In doing so, he slows the opposition’s attack down, allowing others to recover back into shape. Eriksen will generally push forward from the double pivot when United attack, so Casemiro plays an important role in helping him recover and get goal-side of the ball. Casemiro’s presence also allows United’s full-backs to advance more often. On the left, Luke Shaw or Tyrell Malacia overlap into attacking positions, while right-back Diogo Dalot more often inverts. The full-backs on both sides have shown improvement as a result of Casemiro’s signing.

A different kind of centre-forward

Cristiano Ronaldo was left out of the team by Ten Hag and then moved on in January 2023, and United’s front three has been adapted as a result. Marcus Rashford has been used through the middle, providing penetrative runs in behind and an ability to lead a high press or counter-press. It’s a stark change from life with Ronaldo up front.

Anthony Martial has also been used through the middle, but he drops in to link with midfield more often than Rashford (below). The timing of his movement towards the ball has proved effective, and Bruno Fernandes has been the main beneficiary, taking advantage of the space created to make forward runs beyond the opposition from deep.

Ten Hag has clearly asked his players for more movements in behind the opposition’s back line in general, but these are especially noticeable from players other than the centre-forward. His wingers, midfielders and even their full-backs work beyond the dropping centre-forward consistently. The main difference when United have someone like Martial or Rashford dropping from centre-forward, compared with Ronaldo, is that these two players can threaten in behind with their pace, whereas Ronaldo could not at this stage of his career. That in itself gives opposition defenders more to think about than when they faced the veteran Portuguese forward.

When Rashford is used, he also adds to United’s counter-attacking threat, with his pace and direct running reducing the need for backward passes or sets to build moves. He has the ability to exploit a high line and then link with runners from out wide. When up against a more set block, he rotates with one of United’s wingers rather than just staying in a central position. This makes Ten Hag’s front line much more flexible and unpredictable.

With the double pivot of Casemiro and Eriksen, United’s deeper build-up has improved markedly – even in comparison to the beginning of the 2022/23 season. Ten Hag is, for the time being, seemingly content with his side not dominating possession, but he has ensured they are more efficient with their build-up so that they make more of the time when they do have the ball. In the opening two league games of 2022/23, United had 62% possession at home to Brighton and 65% away to Brentford, but lost those games 2-1 and 4-0. In the following four games, they had no more than 52% possession and won each time. They have only properly dominated possession of the ball in two league matches since the defeat at Brentford, in which their build phase was torn apart by Brentford's high press.

Casemiro has added a much-needed security blanket in situations when United lose the ball during their deep build-up. His reactions to a misplaced pass or a heavy touch from a teammate have meant far fewer in-possession mistakes have been punished.

The relationship between Casemiro and Eriksen has also been key to United’s improved build-up play. They understand when to drop and invite pressure, and are showing a better grasp of what Ten Hag wants from his team. This has meant players can pre-empt the movements of teammates, and play passes into zones where someone should be. The result is that the centre-backs, most commonly Raphaël Varane and Lisandro Martínez, have improved when playing into midfield. They also know when to skip central midfield out and play a more direct pass further forward. Dalot moving inside has also worked to create a midfield four. With Fernandes in there as well, United can overload an opposition midfield three (above). In short, they are now a far more cohesive unit when playing through midfield.

The flexibility of Fernandes and Eriksen

Although Eriksen will drop back alongside Casemiro in the double pivot, when United have the ball he will also play more like a number eight at times. This creates more room for Casemiro and also gives his deeper teammates another forward passing option in the central spaces. The result is that Ten Hag’s United play more vertical passes and move from back to front more quickly and efficiently. The front three will stay high and stretch the opposition, while Fernandes drops in to receive to feet. When Fernandes drops deep like this, Eriksen can then become a temporary number 10 between the lines – especially when Rashford is playing up front, or if Martial hasn’t yet dropped.

Once in the final third, Fernandes and Eriksen have been crucial to United’s improved attacking play. Their understanding of when to adopt number-eight positions simultaneously and convert the team into a 4-3-3 has been very useful, while Erisken also recognises when he is needed in the double pivot.

Fernandes and Eriksen both possess the ability to connect into runners in behind the opposition, both when there is space to play into and when crossing from a narrowed position against a lower block (above). Having two players with their ability, vision and understanding of the game is a luxury most other managers are not afforded, but Ten Hag seems to be getting the best out of both.

Rashford has been reinvigorated by Ten Hag's arrival, with his energy and relentless running helping his team out in several ways. His high position and runs in behind force the opposition’s defence back and create space for Eriksen and Fernandes to operate in.

What's more, his diagonal runs from wide – mainly the left, though he has played on the right as well – have sparked rotations with a dropping Martial and Fernandes, who likes to move out to the left. The co-ordination of Rashford’s runs and a pass played by his teammate have improved, and he is getting into better goalscoring positions more frequently as a result. Only once before has Rashford scored more than 11 Premier League goals in a season; he is already on seven in 2022/23.

With so many other players making penetrative runs beyond the opposition, there are more foils for Rashford. He is also making supporting runs to back up the highest player up the pitch. He is adding goals from cut-backs and crosses (above) to his game as a result, and is clearly a more rounded player overall.

There are still improvements to be made, but there are plenty of reasons for Manchester United to be optimistic about how the first half-season of Erik ten Hag’s reign has played out. They appear to be going in the right direction.