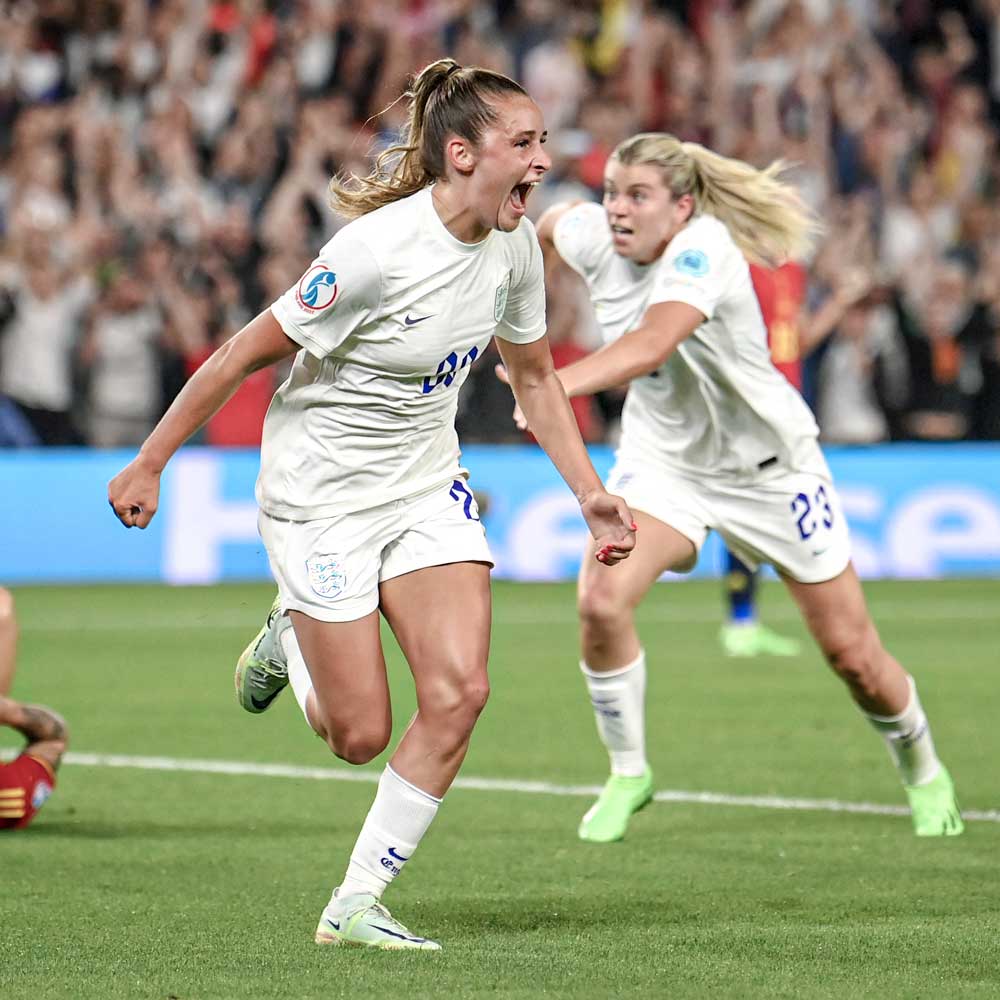 With just seven minutes of this Euro 2022 quarter final remaining, England were staring defeat and early elimination from a home international tournament in the face. Spain had dominated much of the game, and deserved the 1-0 lead they held through Esther González's 54th-minute strike. England were pushing hard for an equaliser, but had not created much of note – a stark change from their dominant performances in the group stage – and Sarina Wiegman's three substitutions had not changed the game as she had hoped. Then, up popped Ella Toone with a goal to send the Amex Stadium into raptures and the game to extra time.

There was no caution to England's approach, though, and they went for the win. Just six minutes into extra-time, Georgia Stanway strode through midfield confidently, before unleashing an unstoppable strike from 25 yards to give England the lead. The hosts then held on to secure their passage into the last four. The dream for Wiegman's much-fancied side lives on.

“Today showed that in this stadium, what the fans did for us, that was really a home advantage," said Wiegman. “The whole game was a test. The level of this game was so high. I haven’t experienced that too much. We know Spain are a very good team, especially in possession. I’m so proud of the team.”

England played in a 4-3-3 formation, with Keira Walsh at the base of the midfield three, behind Georgia Stanway and Fran Kirby (below). Full-backs Rachel Daly and Lucy Bronze frequently drove forward with the ball to support England's attacks, while wide forwards Beth Mead and Lauren Hemp played predominantly in the wide channels. England persisted with that same 4-3-3 formation throughout the game, although Chloe Kelly was encouraged to drive infield more frequently than Mead, who she replaced in the second half of normal time.

Spain set up in an out-of-possession 4-5-1, with their two more defensive-minded central midfielders, Patricia Guijarro and Teresa Abelleira, making it as difficult as possible for Stanway or Kirby to get on the ball between the lines.

Integral role of the midfield three

Number eights Stanway and Kirby were largely unsuccessful in their attempts to get on the ball beyond the Spanish midfield line. Both players took it in turns to move high enough to play alongside centre-forward Ellen White, which meant both of Spain’s centre-backs were occupied.

When building attacks, England’s midfield three played a crucial role in central areas. Walsh adopted a position just behind – and on the blind side of – the pressing Spain centre-forward, Esther González, with Stanway and Kirby then creating clear passing lines to move play forward. A typical picture was centre-back Leah Williamson finding the feet of Kirby, who then bounced the ball back to Walsh. England had the quality to play off no more than two touches in these situations.

England were dynamic with their forward play, with rotations in the midfield and attacking lines. With the aim of occupying spaces between Spanish players, wide forward Hemp moved inside to join the midfield, which then allowed Kirby to move forward and play as a second centre-forward alongside White (above). Kirby looked to position herself between a centre-back and full-back. With Mead maintaining width on the right, this flexible shape made it challenging for Spain to protect the space and affect the England player on the ball.

Attempts to play around or through

England aimed to play around or through the compact Spain defensive line. Walsh was instrumental in helping England switch play, and would often play the decisive forward pass. If the Spain defensive unit was narrow and protected central areas around the penalty box, wide forward Mead took up a position on the outside to receive to feet. This strategy aimed to pull the Spanish defensive unit apart. If the Spain back four was out of shape – for example, if left-back Olga Carmona was not behind the ball – England opted for a pass through the Spain block, playing into the gap between the centre-back and full-back.

Stanway frequently occupied the right inside-channel half-space. If the ball was on the left side of the field, Stanway moved across to the central channel, but she maintained a distance that meant she could provide support to the midfield unit but also create space to exploit when receiving the ball. Her clever positioning played a part in England’s winning goal, as she was able to position herself between the Spanish defence and the holding midfield players (below), who became disorganised as the game dragged into extra-time.

Set up by manager Jorge Vilda in a 4-2-3-1 formation that they adapted depending on the context of the game. Spain were a disruptive force. They pressed the ball with intensity and drove at the England defensive line from wide areas whenever possible. Key partnerships were formed between the full-back and wide forward on both sides of the pitch. Ona Batlle and Marta Cordona on the right (below), and Olga Carmona and Mariona Caldentey on the left, aimed to isolate the England full-backs and pull the retreating England wide forwards into deeper positions. This would then limit England’s potential when transitioning into attack – a key aspect of their success in the group stage.

Spain made England work hard off the ball

England withdrew into a 4-5-1 when out of possession, with their wide players dropping back to help even out the wide overloads (below). In the first half in particular, Spain dominated the ball, and England's attempts to lock play near the touchline were unsuccessful. What's more, Spain moved the ball effectively from side to side across their back line, meaning number nine Ellen White had large distances to cover. This may well have played a role in Wiegman's decision to take her off before the hour mark.

Second-half substitute Athenea del Castillo caused frequent problems, skilfully manipulating the ball and making right-footed left-back Rachel Daly look very uncomfortable. When she got on the ball, Del Castillo drove towards the goal line at pace and pushed the England defensive unit deep. Spain then exploited the depth of the back line with cut-backs to supporting attacking players, who had space to receive. This was precisely what led to Spain’s opening goal from González. Del Castillo received the ball wide, beat Daly with ease, drove towards goal and cut the ball back. Even if González had not been waiting, Mariona Caldentey would have been there to fire home as Spain's ploy worked wonders (below).

When transitioning to attack following a regain in central areas, centre-forward González withdrew to receive to feet. This movement drew England centre-back Millie Bright out of her position alongside Leah Williamson, with Spain then looking to bounce play back into midfield and play wide (below). When executed quickly, this temporarily changed England to a back three, with space to exploit centrally. As a result of this movement, Spain looked very dangerous at times, but the execution of their final ball let them down too often and they failed to take advantage.

Composed Spain play out from the back

England’s high press was frequently beaten by Spain’s impressive play out from the back. Spain used their two defensive midfielders to counter England’s press. They did not bring both players towards the ball, with the furthest defensive midfielder maintaining a central position, which allowed the other Spain players more space to play out. Technical precision and a calmness to play under pressure helped Spain execute their tactical plan and play through the thirds despite England pressing high. As the game wore on, England did not use their high press as much, and chose to conserve their energy in a mid-block, before dropping back into a low block for the final stages of the game. England ultimately held on to make it through to the last four with a historic win.