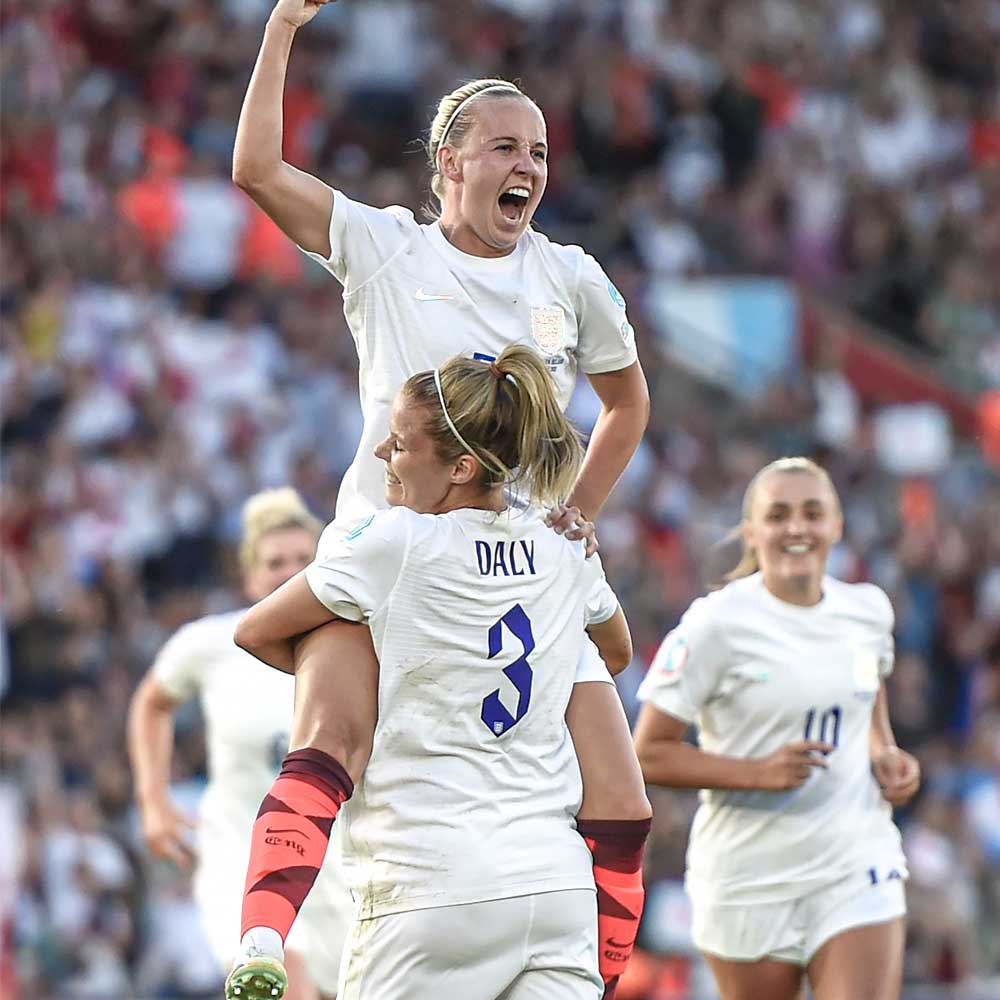 With three wins from three, and two of those wins hugely convincing, England have come through Group A of Euro 2022 in style. Sarina Wiegman’s team scored 14 goals and did not concede any in beating Austria, Norway and Northern Ireland to set up a potentially tricky quarter-final tie with Spain.

The fans in the packed home stadiums have been treated to some fantastic goals, including Beth Mead’s composed finish against Norway, and Fran Kirby’s strike and Alessia Russo’s second goal against Northern Ireland. At the other end, meanwhile, England have rarely been troubled, with three consummate and confident performances at the back resulting in three clean sheets.

After top spot was wrapped up, we’ve taken a closer look at the tactics employed by England so far. What have they done well, and where is there room for improvement?

England have set up in a 4-2-3-1 in each game so far, with the same 11 players making up the starting line-up.

In possession, Wiegman has asked her full-backs to join the attacks out wide simultaneously. Both right-back Lucy Bronze and left-back Rachel Daly have consistently supported attacks by adding wide presence in the final third of the pitch. Bronze has tended to support on the outside, with right-sided wide attacker Beth Mead keen to drift inside (below). If Mead held her position out wide, however, Bronze would support inside, adding another body in midfield.

Bronze has the vision and ability to split the opposition with through balls to find Mead. In the below example, Mead plays a square ball to Bronze, who returns the ball to Mead with a brilliant pass in behind. Mead gets into the penalty area and squares for Lauren Hemp to score.

The way Bronze and Mead have combined has give England a great deal of threat out wide on the right.

Another impressive aspect of England’s game has been the forward runs from Georgia Stanway and Fran Kirby. Although England have been playing with only one centre-forward, penetrative runs from midfield have added central presence close to Ellen White. Both players have been given plenty of freedom to make forward runs, often targeting the space between the opposition full-back and centre-back (below).

With Hemp and Mead wide and high, space has opened up for England’s central midfielders to make runs between and beyond opposition back fours. It’s not as if those wide players have been consistently hugging the touchline, but Stanway and Kirby have been smart in their decision-making. By co-ordinating these forward, penetrative runs through the middle of the pitch with the wingers staying wide, England have created several good chances.

Improvement needed in the build-up phase

England will need to be more consistent in the knockout stages when playing out from the back. There have been plenty of positives with their bold passing out of defence, but at times they struggles against the high pressure Austria put on their defenders. Risky passes against stronger nations may be punished if they aren’t quite perfect.

England like to move the ball across their back four to encourage the opposition to jump out of their defensive shape. Their aim is mostly to find playmaker Keira Walsh at the base of midfield (below).

However, when Walsh is marked and England cannot progress through her, there can be issues. In the below example against Northern Ireland, with an opponent close to Walsh, Millie Bright’s poor pass into midfield is easily cut out. Northern Ireland raced up the other end and forced a save from Mary Earps, so they got away with it on this occasion. But England will need to cut out such errors against stronger opponents.

When England have pressed high themselves, they have done a good job of preventing their opponents from playing out from the back, and winning the ball after forcing the opposition to go long (below). Ellen White's clever, angled pressing has been key to the success England have had in this regard.

England’s third goal against Norway featured a similar high press, with a narrow front three pressing with intensity. White and Mead doubled up, won the ball, and White went through on goal to score.

England have been well organised out of possession, their narrow and compact shape preventing the opposition playing forward passes that split them. This has seen their wide midfielders drop in alongside the double pivot (below).

England have coupled this with speed and direct running on transition after a regain, with the players breaking out of their defensive shape extremely quickly.

Beth Mead has been England’s stand-out performer in the group stages. Having been dropped from the Team GB squad for the Olympics last summer, she looks like a player with a point to prove. Against Norway, she scored three goals and was largely unplayable.

Able to go around the outside and cross or cut in and threaten goal, she is a constant menace down the England right. Her superb individual goal against Norway, when she danced through the heart of the opposition's defence (above), was one of the highlights of the tournament so far.

With five goals in the group stages, Mead is a contender for the tournament's golden boot. Many more goals from Mead, and England could also be in with a decent chance of going one step further than the men could manage at Euro 2020. They could win the European Championship.