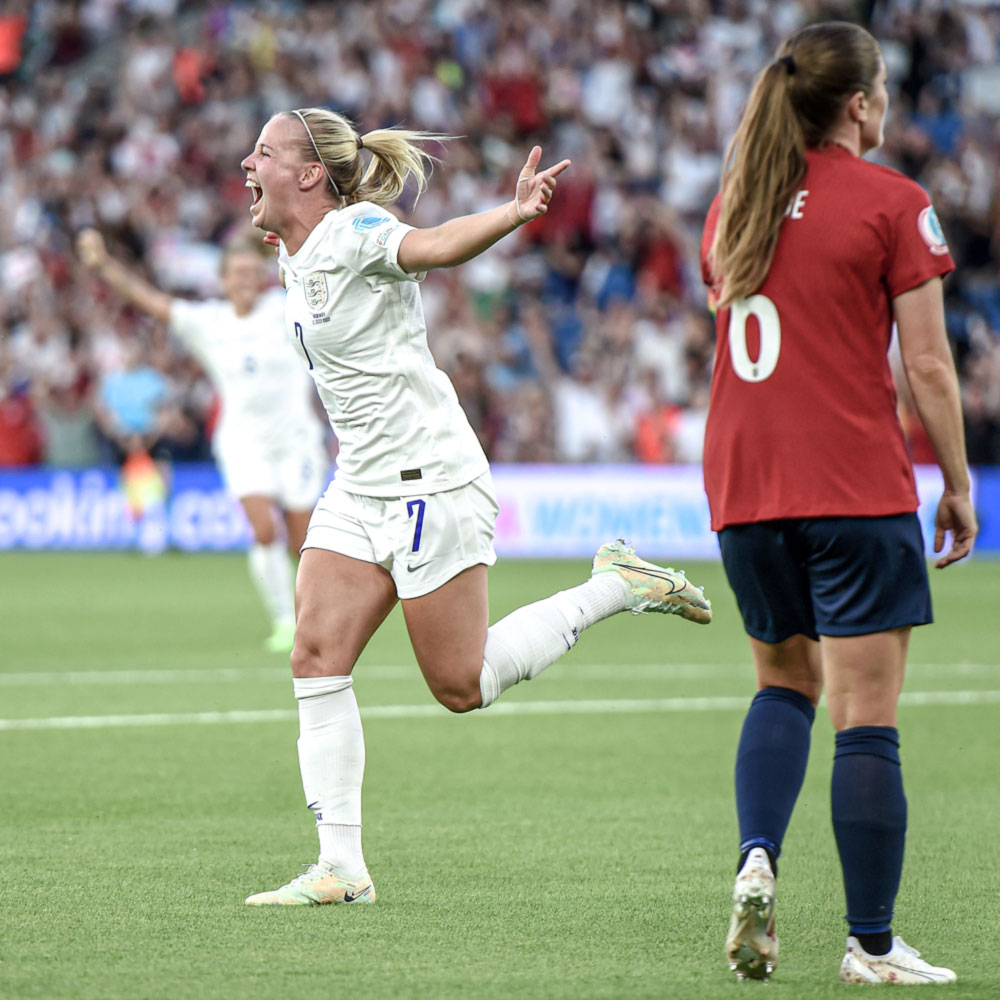 England Women roared into the quarter finals of the Women's Euro 2022 with a stunning 8-0 hammering of two-time winners and four-time runners-up Norway at Brighton's AMEX Stadium.

Beth Mead was again the star of the show after her match-winner against Austria in the Lionesses' first group game, scoring three and making another in a devastating display of wide-forward play. Ellen White added another two to take her record total of England goals to 52, while Georgia Stanway, Lauren Hemp and Alessia Russo were also on target against a shellshocked Norway.

"I think I can be very satisfied tonight," said head coach Sarina Wiegman after the game, while urging restraint. "We try to play our best game and today we did, but it’s just three points. If you win 1-0 or 8-0, it doesn’t make a difference. We didn’t win anything yet.”

Sarina Wiegman set her England team up in a 4-3-3 formation, with wide forwards Beth Mead and Lauren Hemp providing width either side of centre-forward Ellen White. Full-backs Rachel Daly and Lucy Bronze were expansive when England were in possession, occupying space in the wide channels and frequently joining in attacking play. The midfield three rotated their positions, sometimes playing with Keira Walsh as a single deep-lying midfield player, and occasionally withdrawing Georgia Stanway to form a double pivot while Fran Kirby operated as a number 10. In possession, Stanway looked to drive forward with the ball, occupying the right inside channel and drawing the Norway mid-block. This acted as the trigger for Mead to occupy the space outside Norway left-back Julie Blakstad (below) or move infield.

On the ball, Mead offered flexibility in the attacking third. If space was available in the inside channel, she would move infield, across the front of the full-back. As she did this, right-back Lucy Bronze would advance to occupy the space in the wide area and create a passing option for Mead to move the ball back wide (below). If opting to cross, Mead looked to deliver the ball into a second six-yard box and target the forward runs of the dangerous White.

Norway adopted a 4-4-2 formation out of possession, with wide players Karina Saevik and Guro Reiten withdrawing to support the midfield line. They attempted to play in a mid-block, moving as a team to screen space and stop forward passes. But they afforded space to England in wide areas, which gave the hosts the opportunity to cross the ball early, before the defensive line was set. Central midfielder Ingrid Engen had the responsibility for dropping to deal with the wide threat of Mead, (below) but due to the speed of England’s play she struggled to adopt an effective position quickly.

When building out from the back, the England defensive unit looked to utilise the full width of the pitch. Walsh offered a central option to play forward, adopting a position just behind and out of sight of Norway forward Aga Hegerberg (below). Walsh would rotate her position, offering to receive the ball on the back foot. Captain Leah Williamson, playing as the left-sided centre-back, looked to move forward with the ball into available space if she was not pressed, joining and creating an overload in midfield. Further forward, wide forwards Hemp and Mead would hold their positions outside their respective full-backs, creating more space in the midfield for England to play through.

Varied attacks against the low block

Norway played in a low block for large periods of the second half, which encouraged England to commit more players forward. Williamson played in a more advanced position, often combining with Kirby in midfield (below) in an attempt to draw Norway out of their deep position. England varied their attacking strategy, too – they crossed more from the inside channel, took more shots from outside the penalty area and looked to exploit the second phase following any rebounds or deflections. Kirby and Stanway in particular played between the lines, finding pockets of space that attracted a direct pass, withdrawing deeper to connect play or combining with the wide forward when the ball went wide.

How Norway looked to attack down their left

Head coach Martin Sjögren set Norway up in a 4-2-3-1 formation, with Aga Hegerberg as the number nine and Caroline Graham Hansen playing in behind her. Central midfielders Ingrid Engen and Vilde Risa looked to change the point of their attacks through the midfield, while left-back Julie Blakstad in particular aimed to join in attacks and drive forward on the outside of Lucy Bronze (below). During these moments, the right-sided wide attacker Karina Saevik would adopt a position on the outside of England left-back Rachel Daly; when the ball then moved into the penalty area, Saevik would look to make runs towards goal from Daly’s blind side. Norway too rarely managed to disrupt the England defensive line, however, and under sustained pressure never committed enough players forward.

How England used the aggressive press as an attacking weapon

Norway struggled against England’s effective and aggressive high press, which was designed to reduce any available space for their opponents – particularly when Norway had the ball on one side of the pitch in their own half. As an example, if Norway had possession on their right, both Mead and Bronze looked to move into the central channel from the opposite flank (below). That enabled the central midfielders to get involved in a disruptive press as soon as an opponent received in an area where they were isolated or had limited options. From these situations, England could transition into possession and counter-attack at pace against a disorganised defensive line.

When out of possession for any sustained period of time, England would withdraw into more of a 4-5-1 formation. Wide forwards Mead and Hemp dropped to support the midfield three and narrow their position to play in the inside channels (below). Keira Walsh occupied a position just in front of and between centre-backs Leah Williamson and Millie Bright, while the defensive line would play no wider than the width of the penalty area. This allowed the Norway wide forwards plenty of space, but England’s strategy to force their opponents wide and away from the goal was successful in reducing entries in to the penalty area.