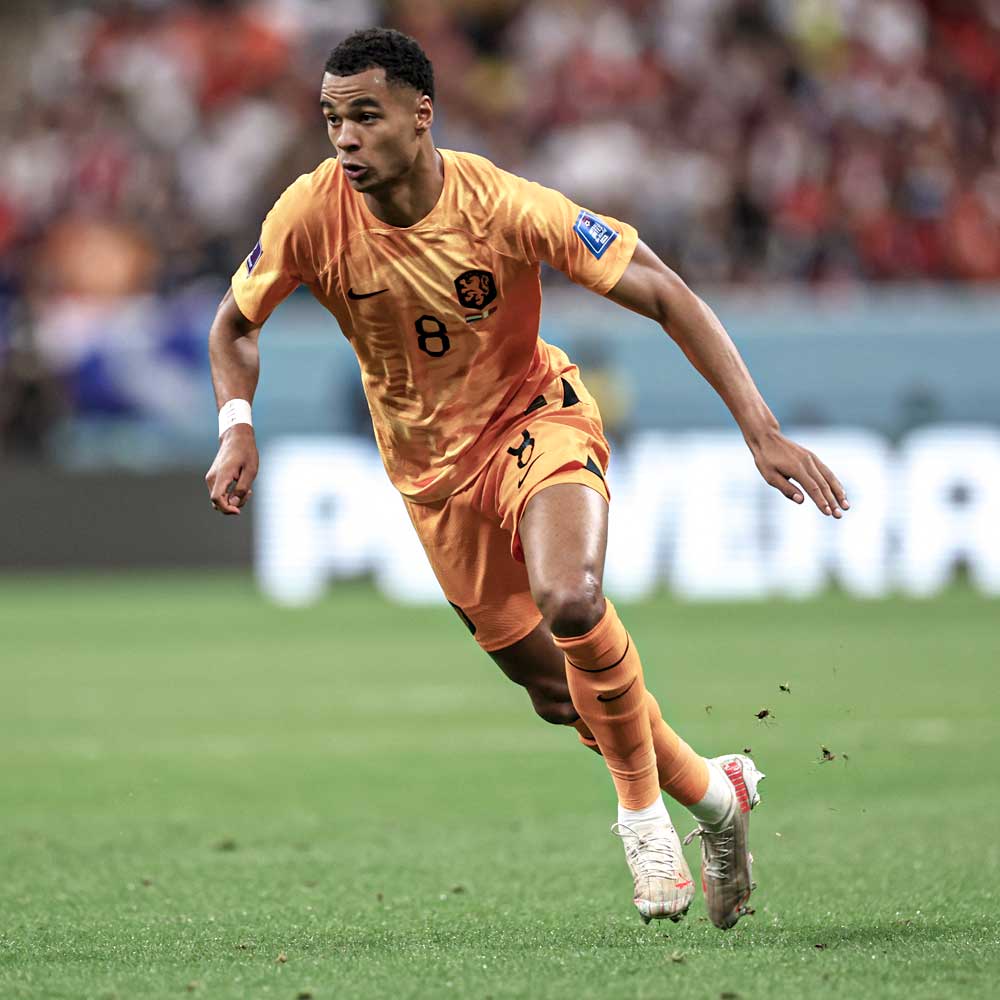 Cody Gakpo's Eredivisie form in 2022/23 led to a huge amount of speculation about his future and links to a vast number of Europe's top clubs. Then, a string of electric performances for Netherlands at the World Cup in Qatar – where he scored three goals in three group-stage games – made it almost certain he would be on the move. Manchester United had appeared most likely to sign him, but in the end it was Liverpool who paid the £37m required to prise him from PSV Eindhoven's grasp and confirm a January 2023 move. Jürgen Klopp has a strong track record of signing and improving exciting, young forwards, and Gakpo will be in safe hands when it comes to his ongoing development.

“There is a lot to like about Cody,” said the Liverpool manager. “He is still only 23 years old but he already has a lot of experience. “He was the captain of PSV, he was the Player of the Year in Holland last season and, as a lot of people have just seen, he also had a great World Cup with his national team. So, it is clear that he is already a really, really good player but his age also means he also has the potential to become even better. Offensively, he is very versatile and on top of this we know he is a smart footballer and also a smart person, so we are really excited to be able to work with him.”

Gakpo is a right-footed attacker who has tended to play on the left for PSV, though he has also played the occasional game for them at centre-forward. This led to more consistent game time through the middle for his country.

The strongest aspect of Gakpo’s game is his ability to find shooting opportunities, which he does particularly well when moving inside from a wide starting position. He follows his passes infield after cutting in, using his front foot to knock the ball forwards and then offering to receive a return pass, often in a shooting position. From these inside-left positions, he also has the ability to continue his run into into the space between the opposition’s right-back and centre-back. Here, he can receive on the move in an even more dangerous position.

Gakpo is an agile attacker who adjusts his body shape well inside the penalty area to finish on the run or control the ball while moving at pace before shooting across goal. He likes to open his body up to bend a shot across goal with the inside of his right foot (below), while he has also shown an ability to drive through the ball with his laces.

The young attacker also often works himself a shooting opportunity by shifting the ball quickly from his right foot to his left before getting a shot off. He has superb balance, which allows him to shift his weight from one side to the other and then strike the ball without his technique wavering. Defenders often try to force Gakpo on to his left foot, but he has improved with his weaker foot so much that opponents can no longer show him to one side. They often double up against him, but that then frees up one of Gakpo's teammates and creates space elsewhere.

He makes explosive movements to create space to shoot, and uses those same powerful muscles to generate lots of power in his shots with very little backlift. After pushing the ball past an opponent with a larger touch, he can break past them in the blink of an eye, and he is particularly effective at doing so from a standing start. He uses this individual ability to help his team progress up the pitch, break lines and draw fouls in dangerous positions.

When opponents send an extra player towards Gakpo to double up on him (above), they usually focus on trying to stop him him driving inside. In these situations, the Dutchman has the ability and speed to use a knock-and-run on the outside, before driving the ball low across goal. This is far from the best side of his game, however, and he usually targets an area rather than a specific player. His ability to push the ball forward and drive into space past a defender also makes him a threat in transition.

When creating from wide areas, Gakpo is far better when he stands an opponent up before moving the ball inside on to his right foot and delivering an inswinging cross. He currently lacks the vision or ability to pick out a specific teammate, so the effectiveness of these crosses tends to rely on the timing of his teammates’ runs. When they are in unison, however, they are extremely difficult to defend, as he targets the space between the centre-backs and just in front of the goalkeeper (below).

Gakpo has played on the left for most of his career so far. He has played much of his best football at PSV under head coach Ruud van Nistelrooy in 2022/23, lining up on the left in a 4-2-3-1 or 4-3-3. Before the break for the World Cup, he ranked top of the Eredivisie in 2022/23 for both goals and assists, as well as shots attempted and chances created.

Gakpo’s movements inside from the left complement the overlapping runs made by left-back Philipp Max. Much of his job is to help take opponents away from Gakpo and help him isolate an opponent. Gakpo will then look to beat that opponent either around the outside before crossing, or on the inside before getting a shot off. Youngster Xavi Simons plays at number 10, getting between the lines and providing the option of a bounce pass for Gakpo as he drives infield. When the ball’s on the left, Simons will often remain close to Luuk de Jong, PSV’s centre-forward – in contrast to the rotations on their right, which will often see Simons rotate out to the flank. With him central alongside De Jong, Gakpo will remain wide and then drive inside into the space that has been created (below). This tactic also ensures numbers inside the penalty area to compete for Gakpo’s inswinging crosses.

As well as providing a direct threat on goal from the left, Gakpo also has the ability to beat his opponent consistently. He had the second most dribble attempts in the 2022/23 Eredivisie before the World Cup break. Even if he doesn’t actually look to beat his opponent, the threat of his dribbling means that opponents might double up. In those instances, Gakpo has shown good vision to slide the overlapping left-back in towards the byline, before bursting into the area to attack a cut-back or any second balls.

Gakpo’s ability to drive with the ball is also evident at transitions, when PSV burst forward with their wingers making runs inside, the centre-forward holding their position and the full-backs overlapping around the outside. These movements allow Gakpo to find space to exploit in transition by carrying the ball at pace, usually through the left inside channel.

Playing through the middle

Gakpo has played both up front and in a withdrawn position underneath two centre-forwards in a 3-4-1-2 shape for Netherlands. When he plays as a number nine, he will spend much of his time as the highest player, attacking the space in behind. As he then starts in the centre of the pitch, he no longer needs to move in from the left to threaten goal. He receives to feet less often, and even when he does he has shorter distances to travel, so he dribbles less frequently. As a result, his attacking movements are usually off the ball.

Other attackers such, as Steven Bergwijn, Memphis Depay and Davy Klaassen, all like to drop towards the ball to receive between the lines. If Gakpo is playing up front in a two, this movement then gives him licence to move into the left inside channel (below). If he is playing as a number 10, he pushes forward in a simple rotation with the player who has dropped out of the front line. This means Gakpo can receive on the last line of the opposition’s defence, and on the run. He can accelerate so quickly that he can explode away from the last defender and get in on goal.

From a central position, Gakpo has had to learn to vary his movements, developing his ability to pin a defender, drop towards the ball to receive at feet and then spin in behind. This is very different from his job on the left, when he holds his position wide and waits for the ball to come to him. In the penalty area, he uses double movements to lose his direct opponent, and is always on the hunt for space close to goal.

He is a brilliant poacher when in those positions, but he also has many more strings to his bow. Liverpool are getting a very good attacker with many, many strengths to his game.