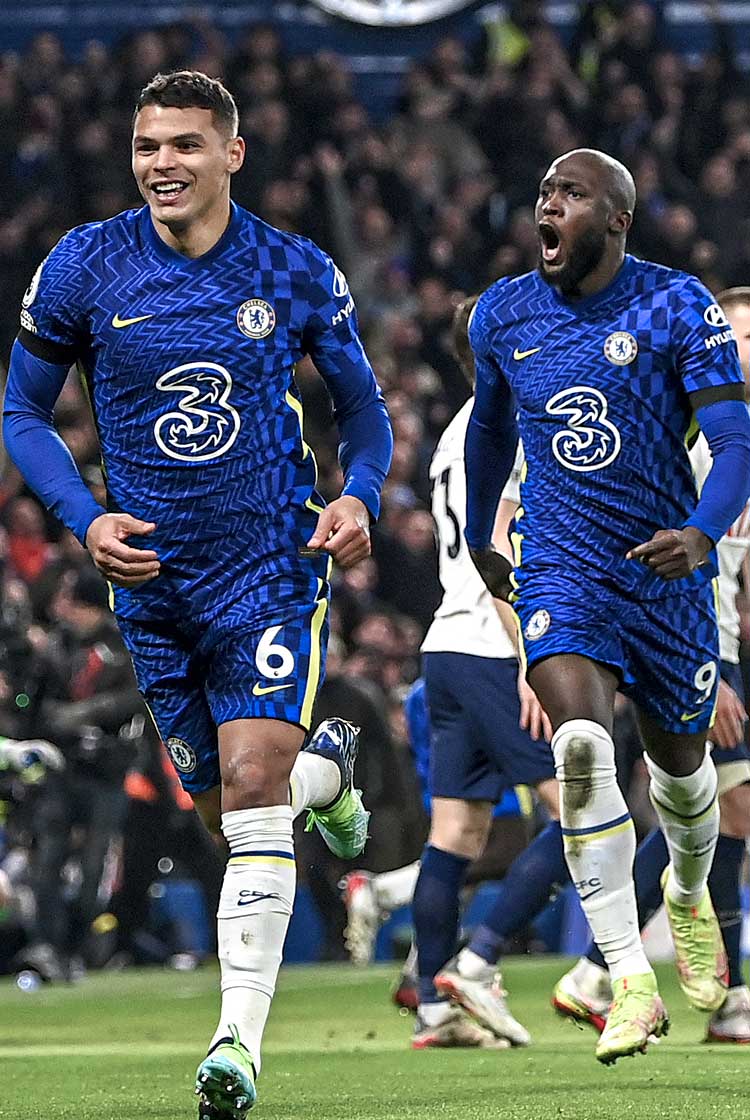 Antonio Conte bemoaned the gulf in quality between his current and former teams after Tottenham suffered a fourth defeat to Chelsea of 2021/22. Having beaten Spurs at home and away in the recent two-legged Carabao Cup semi final, Thomas Tuchel's Chelsea won at Stamford Bridge thanks to second-half goals from Hakim Ziyech and Thiago Silva. Harry Kane had a goal disallowed a 0-0, but ultimately Chelsea were comfortable winners. The victory ended a run of four league games without a win for the European champions, who will hope the result can reignite their title push.

This was only the second occasion in top-flight history that two clubs have met four times in a season, and one team has won all four games without conceding a goal. Conte insists recent results show the gap between the teams remains substantial. "My feeling is always the same of the last games; the gap is very large between us and Chelsea," he said. "I said this before, and when you lose three games in 10 days it means your opponent is better than you in every aspect."

Tuchel said the win was a big one for Chelsea. "[It was] very important for morale – it changes everything, the mood, the belief," he said. "We played the game we deserved. A lot of good stuff, we were patient and kept on believing and attacking in the second half."

Movement of the two number eights
Thomas Tuchel set Chelsea up in a 4-3-3 in-possession shape, up against Tottenham’s 4-4-2 block. The home side initially progressed play by finding runs through the inside channels from number eights Mason Mount and Mateo Kovacic. By doing so, they were able to penetrate the space inside the Tottenham full-backs, especially when those defenders had moved out to close down Chelsea wide midfielders Callum Hudson-Odoi and Hakim Ziyech. Further rotations between the number eights and wingers allowed the wide players to move inside on to their stronger foot and connect with Romelu Lukaku or Jorginho. The number eights then moved wide to provide support on the outside; this created space in the inside channels for Hudson-Odoi and Ziyech to move into, either with or without the ball (below).

Switches of play from left to right
As the first half progressed, Chelsea had plenty of joy down their right side. Tottenham had attempted to match up Chelsea's wide pairs by bringing their wide players very deep to support the full-backs. However, Tottenham’s midfield four were underloaded against Chelsea's five, and Jorginho was often left free in central midfield (below). Chelsea switched play effectively through Jorginho, and they looked particularly threatening when moving play from left to right to look for the advancing César Azpilicueta. His movements around the outside allowed Ziyech to dribble inside on to his stronger left foot, and Mount to make penetrative runs through the inside channels. These movements on Chelsea’s right eventually brought the first goal – a superb curling strike from Ziyech who found space thanks to the movement of Azpilicueta and Mount.

Central midfield overload
The home side dominated possession comfortably for the majority of the game. Whenever Tottenham’s front line narrowed to screen passes into Jorginho, Chelsea played around them and found their full-backs. From here, they worked the ball back inside to Jorginho, with full-backs Malang Sarr and Azpilicueta then moving higher to join in with the next phase. Should Tottenham’s midfield remain narrow and compact, Chelsea found their wingers and continued to play around Spurs. Whenever gaps appeared in the visitors' second line, though, Jorginho fed the ball through to number eights Mount and Kovacic in the inside channels (below). Tottenham’s midfield four simply could not cover both options at the same time. Chelsea's three-on-two overload in central midfield meant they not only dominated the ball, but could progress forwards consistently.

Transitions from a mid-block
Tottenham converted into a 4-3-3 shape after going two goals down, and Chelsea dominated possession less. However, this was largely because, at 2-0 up, the home side did not press as much and often dropped into a mid-block. When they won the ball, Chelsea transitioned play forwards quickly to find the front three, exploiting the fact that Spurs were pushing their full-backs up as they chased the game (below). Chelsea’s midfield three remained very compact without the ball, and only pushed one player forward to support Lukaku, but they were happy to keep sufficient numbers behind the ball.

An unfamiliar 4-4-2 shape
Antonio Conte set Tottenham up in a 4-4-2 attacking shape with Harry Kane and Steven Bergwijn up front. Kane dropped into midfield whenever possible, in an attempt to make it three on three in central midfield. When he moved to the left, Pierre-Emile Højbjerg moved out to increase the distance his direct opponent had to travel to press him. This movement also created a passing lane through the inside channel into Kane (below). Ben Davies then pushed forward to support Ryan Sessegnon, as Tottenham focused most of their play around the outside of their opponents.

Bright signs on the right came to little
Bergwijn looked to stretch the opposition with runs in behind, and Kane dropped into the space he created in midfield (below). The two full-backs on Tottenham’s right side – Japhet Tanganga and Matt Doherty – rotated positions regularly, while Harry Winks and Højbjerg supported underneath the ball. However, Chelsea often locked the play in wide areas, with the central midfield denying Spurs access back inside to the double pivot or Kane, which limited their progress significantly.

Change to 4-3-3
Conte changed to a 4-3-3 shape in the second half, with Lucas Moura and Oliver Skipp introduced for Tanganga and Sessegnon. Skipp and Højbjerg played as number eights, and dropped out of midfield to allow the full-backs to move much higher (below). Kane was no longer required to drop as deep, because wingers Moura and Bergwijn moved inside to offer central passing options. Tottenham enjoyed more possession in this shape, but this was largely because Chelsea had dropped back to deal with Tottenham’s greater attacking presence.

Struggling to break down Chelsea's block
Despite Tottenham having more possession and moving higher up the pitch, Chelsea’s compact block proved highly effective. Chelsea's wingers dropped deep to track the runs of Tottenham’s full-backs, and sometimes even formed a back six in the process. The hosts' central midfield three then blocked any attempted passes into Tottenham’s front three (below). Whenever Spurs managed to progress play around the outside of Chelsea's shape, the home side dealt effectively with crosses. They had sufficient numbers in the centre of the pitch and, given they didn't need to commit players forwards, remained largely untroubled.