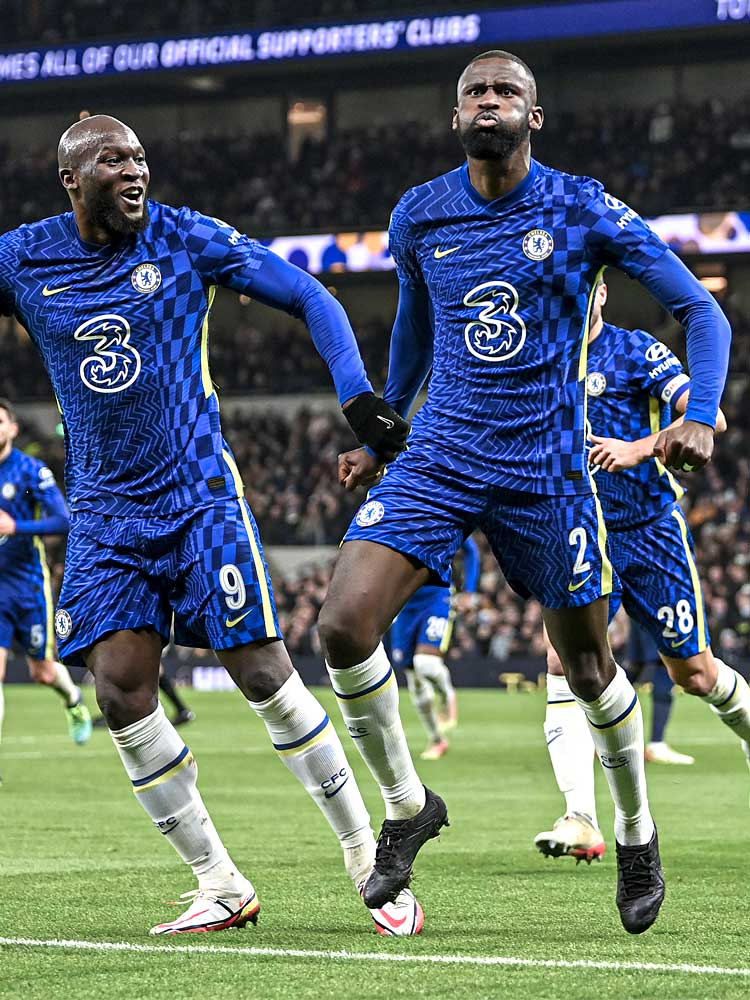 Chelsea reached yet another final, this time in the League Cup, as Antonio Rüdiger's first-half header secured a 3-0 aggregate victory over Tottenham. The hosts had two penalties correctly ruled out by the Video Assistant Referee (VAR), while a strike from Harry Kane was disallowed for offside. Chelsea manager Thomas Tuchel, who has led his team to the finals of all three cup competitions they have been involved in since his appointment in January 2021, said: "In the first half, we were the better team and we deserved to be up. But we lost concentration and lost focus in the last 15 minutes of the first half, and again in the second half. We were almost punished for a lack of focus. We played at 90 per cent and that's not our style – we shouldn't do this."

Progressing beyond the Chelsea midfield
Tottenham were organised in a 3-4-3 formation against opponents who defended in a 5-3-2 shape. The hosts regularly prioritised working possession around Chelsea's midfield three, often through one of their number 10s dropping into the relevant inside channel. Wing-backs Emerson Royal and Matt Doherty provided their width, and were supported by their closest central defender. Lucas Moura's willingness to dribble (below) was particularly useful when he was the one to drop. It often took him beyond the Chelsea midfield, from where he could play into wide runners or the advanced Harry Kane.

Creating easier access into Harry Kane
Chelsea's wider central defenders started following the Tottenham number 10s, in an attempt to prevent them from dropping to receive. As a result, Spurs were forced to adopt a new pattern of movement. Harry Winks, who started alongside Pierre-Emile Hojbjerg in the double pivot, started drifting left; this drew Mason Mount with him, and created a passing lane for Ben Davies (below) into Harry Kane. A lack of runners between the lines and in support of Kane undermined their efforts in these advanced areas, however.

Lacking the final ball
During the second half, the Spurs wing-backs adopted significantly more advanced positions (below) in an attempt to occupy their opposite numbers. One of the number 10s – in this example, Giovani Lo Celso – continued to withdraw to support Winks and Hojbjerg, which helped them progress through Chelsea's shape. The other number 10 supported Kane, giving them greater potential further forward. Too often, though, the final ball – particularly into Kane – was short on quality. This prevented them creating goalscoring chances.

Attacking with greater numbers
Spurs ended with one of their two defensive midfielders also making forward runs to join the two number 10s around Kane. Against what became Chelsea's 5-4-1 – only Romelu Lukaku remained in an attacking starting position – both of the hosts' wider central defenders could also advance. With Chelsea limiting space in the centre of the pitch (below), Spurs used quick combinations, or their wider central defenders and wing-backs, to progress possession. Again, though, their final ball inhibited them.

Controlling the game from a 4-2-2-2
Tottenham started with an out-of-possession 5-3-2, but they were quickly forced to reorganise into a 4-4-2 block in an attempt to contain the 4-2-2-2 shape Thomas Tuchel started with. Callum Hudson-Odoi played alongside Mason Mount as a second number 10, with Timo Werner and Romelu Lukaku forming the front two. During the first half, Werner drifted to the left (below) while Lukaku stayed more central and looked to advance in behind. From the base of midfield, Jorginho and Mateo Kovacic controlled possession superbly, often for lengthy periods.

An orthodox front two and wide advances
After Spurs became settled in their 4-4-2 block, Werner rejoined Lukaku in a more familiar central front two. Both looked to threaten in behind, but they were also able to drop and link with the central midfielders. The more Jorginho and Kovacic dominated the ball, the more consistent Chelsea's attacks became – particularly as Spurs' 4-4-2 lacked the necessary numbers in central midfield to effectively cover them. With Hudson-Odoi still looking to come infield, Malang Sarr readily advanced from left-back. César Azpilicueta was more reserved on the right of the Chelsea attack, where Mount drifted wide to support combinations into Werner and Lukaku.

Effective movements
Werner and Lukaku continued to adopt advanced positions during the second half. With Werner now attacking more from the right, Mount and Hudson-Odoi attacked from more central positions, almost as a pair (below). When this drew Spurs' wider midfielders infield, the Chelsea full-backs had increased space to advance into. Mount and Hudson-Odoi could also receive between the lines if Winks and Hojbjerg moved to press Jorginho and Kovacic.

Adopting their 3-4-2-1
Chelsea finished the game in Tuchel's long-favoured 3-4-2-1 shape, in an attempt to disrupt any momentum Spurs might have built. Azpilicueta and substitute Marcos Alonso provided their attacking width from wing-back (below), while Hudson-Odoi and Hakim Ziyech, another substitute, supported Lukaku. Both number 10s combined infield and together to progress beyond the Spurs midfield, while Lukaku attacked as a lone striker looking to capitalise on these combinations or crosses from the wing-backs. The visitors ultimately saw the game with relative ease.