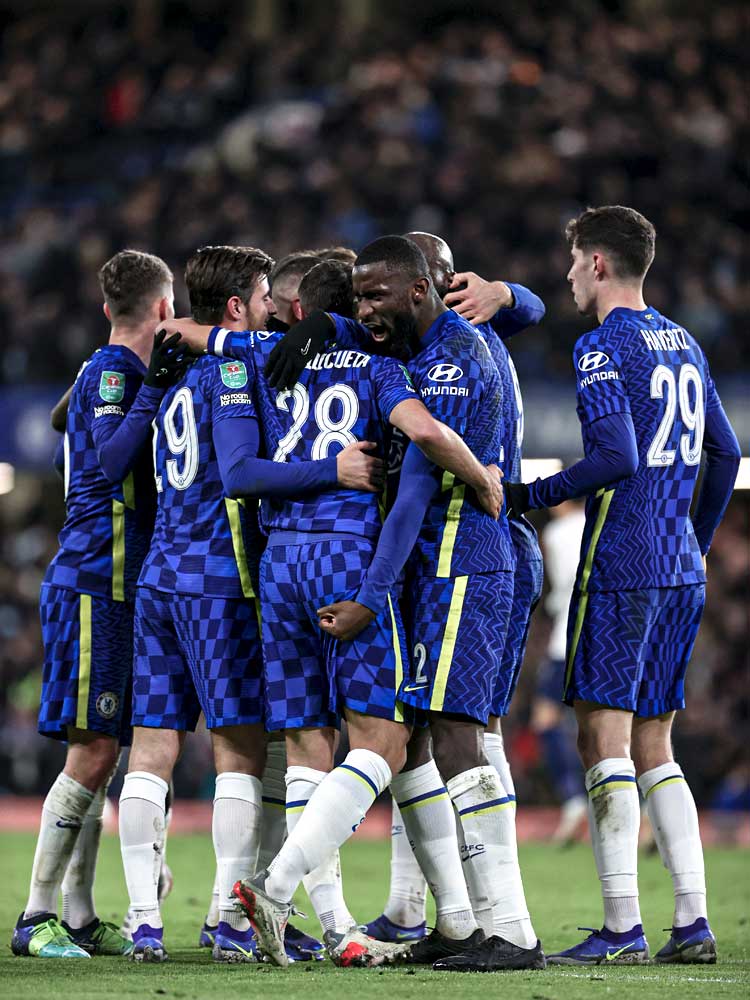 Antonio Conte's return to Stamford Bridge as manager of rivals Tottenham ended in a one-sided defeat in the first leg of their League Cup semi final. The Italian remains in contention to lead Spurs to their first trophy since 2008, when they beat Chelsea in the final of this competition, but he could only look on as his team conceded two poor first-half goals to Kai Havertz and an own-goal off Ben Davies.

"It is very difficult to understand which part you take to improve because there is a lot of situations to improve," Conte said afterwards. "We need time, and patience. Everyone has to have patience, because Tottenham in the last years, the level has dropped a lot and now we have to fight to win every game."

His opposite number, Thomas Tuchel, said: "It seems like a deserved win, an excellent result because it reflects the game. We could have scored more, but it is hard to score against Tottenham. We played 4-4-2 when we had the ball, because there was no one left to play with a back five. We had some moments in defending where we created a back five. The team was very focused, very open-minded."

Attacking pairs
In a departure from his usual 3-4-3 set-up, Thomas Tuchel started without the wing-backs who typically provide Chelsea's attacking width. Instead, he initially set his team up in a 4-2-2-2 formation featuring a number of pairs. When Hakim Ziyech moved infield as they attacked, César Azpilicueta advanced from right-back to form one pair. On the left, Marcos Alonso and Mason Mount rotated (below) as another. Jorginho and Saúl Ñíguez formed the double pivot, which was used to switch play and protect against counter-attacks. Further forward, Kai Havertz advanced alongside Romelu Lukaku in a front two. Havertz and Lukaku also moved, as individuals, to link with teammates on either flank.

Reorganising into a 4-2-3-1
During the first half, Tuchel shifted to a 4-2-3-1 in which Ziyech and Havertz adopted wider starting positions, with Azpilicueta and Alonso providing support from deeper positions. Mount then operated as the number 10, drifting in both directions to link with the full-backs and wide attackers. Lukaku regularly moved into the inside right channel, from where he could make runs in behind or across Tottenham's out-of-possession back five. There, he could also link with Ziyech, in the knowledge that Mount preferred drifting to the left (below).

Introducing Werner
Timo Werner replaced Havertz for the second half, and his movements, complementing those of Mount and Alonso, regularly drew Spurs' double pivot across. This in turn created space to play into the feet of the more central Lukaku. Tottenham defended with a 4-2-3-1 throughout the second half, which meant the wide forwards – and Werner in particular – had more space to drive infield (below).

Strength on the left
Chelsea's greater threat came from the left throughout the 90 minutes. In the second half, Mount's willingness to move wide and provide cover for Alonso encouraged the Spaniard to advance and provide overlaps (below). This in turn helped Werner to move infield earlier and work closer to Lukaku. With Emerson Royal advancing to press Alonso or Mount, Werner was able to attack the Spurs central defenders; this worked to forced the visitors' double pivot deeper, in turn giving Jorginho and Saúl increased space to move into.

Encountering Chelsea's press
Tottenham set up with an in-possession 3-4-2-1 shape, against which Chelsea defended with a back five. Mason Mount worked back to support the double pivot at the base of the hosts' midfield, while Kai Havertz and Romelu Lukaku pressed the central defenders. With Chelsea's full-backs covering the Spurs wing-backs, the high press troubled the visitors – particularly when possession was with one of their wider central defenders. Here, the closest passing options were aggressively cut off, as seen in the build-up to Chelsea's opening goal (below).

Creative struggles
The Chelsea press meant that Spurs struggled to progress into the final third during the first half. They rarely penetrated into the penalty area or found central striker Harry Kane in advanced areas. On the occasions they did reach the attacking third, it was because Son Heung-min and Lucas Moura drifted wide from their starting positions as the supporting number 10s and drew a wider central defender with them. With Matt Doherty cutting infield from an unfamiliar position as left wing-back, and Emerson Royal making similar movements from the right (below), a passing lane back into Kane was created. The visitors lacked the quality of final pass they required, however.

Adopting a 4-2-3-1
Like his opposite number, Antonio Conte shifted to a 4-2-3-1 for the second half, with Tanguy Ndombele introduced to play behind Kane as the number 10. With Emerson and Ben Davies attacking from full-back, and Oliver Skipp and Pierre-Emile Hojbjerg forming a double pivot, Lucas Moura and Son Heung-min continued to attack infield from narrow positions to encourage overlaps from the full-backs. Ndombele's presence as the 10 encouraged Kane to stay more advanced; this increased the combinations they could offer in central midfield to work through and around the hosts' midfielders.

Suffocated by man-marking
Having converted to a back four, the visitors continued to be tested by Chelsea's high press as they built possession. Lukaku sought to restrict play to one side of the pitch and to prevent the two central defenders from finding each other, while the Spurs midfield three were all marked by their direct opponents (below). Ndombele thus moved wide to receive possession and create a passing lane into one of their front three. Emerson and Davies continued to be pressed by their opposite numbers, so the visitors remained reliant on succeeding, one-on-one, to progress forwards.