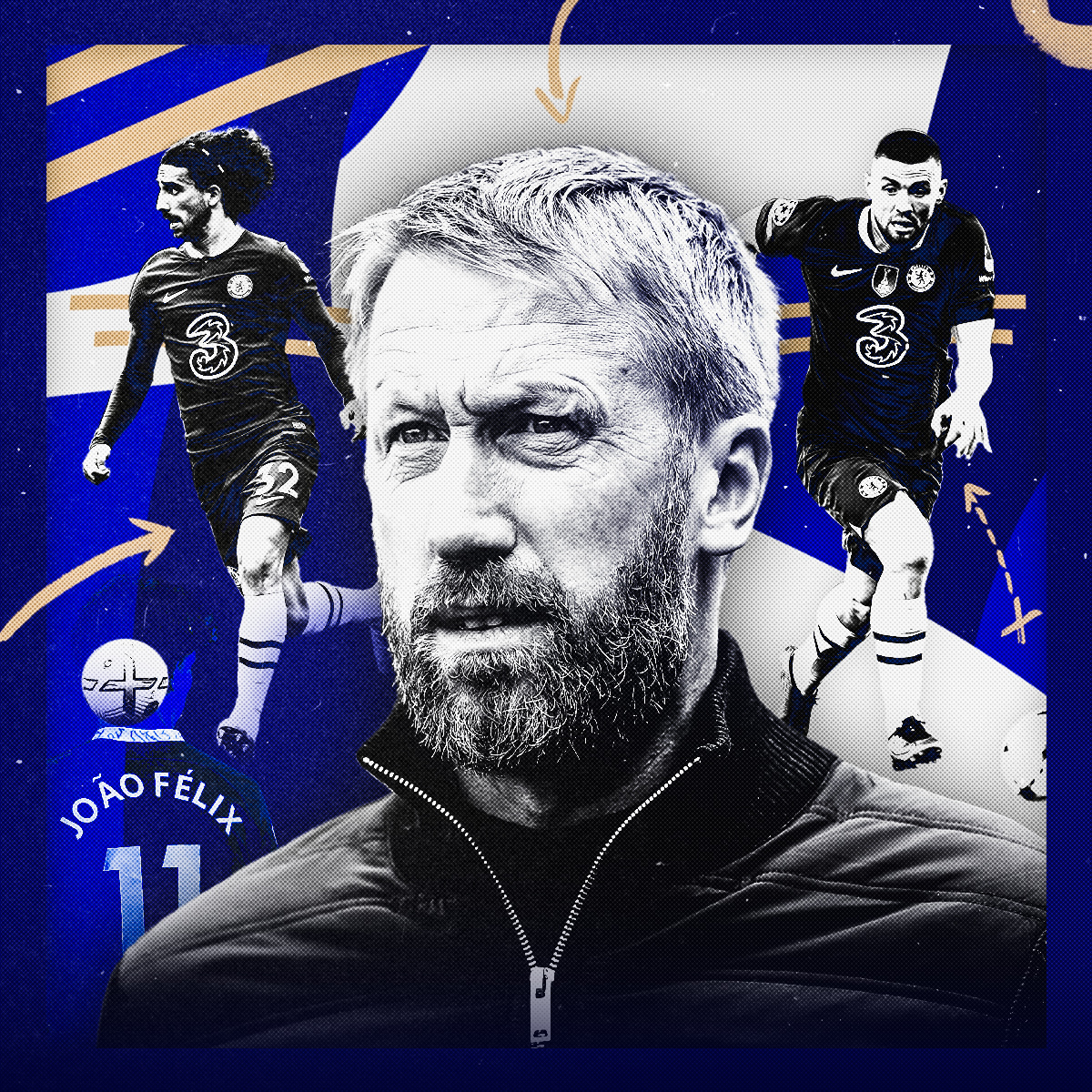 It has been an eventful year at Chelsea. From the sale of the club to Todd Boehly, to Graham Potter's appointment and a vast number of big-money signings made along the way, the scale of change has been vast. On the pitch, there have been plenty of changes, too.

One year ago, on January 19 2022, Chelsea were third in the table, hot on the heels of Liverpool in second, and on their way to the final in both the FA Cup and League Cup. Today, in 2023, Chelsea are 10th in the table and already out of both domestic cup competitions.

There has, however, been progress. Potter has started to get his ideas across and, despite injuries having decimated the squad, Chelsea have put in a number of performances that will have pleased their manager. They are starting to look like a Graham Potter team.

So, what exactly has he changed on the pitch? Here, we've taken a look at Chelsea's tactics this season, and offer some reasons for optimism heading into the second half of the 2022/23 campaign.

At Brighton, Potter used a huge variety of structures and systems. He changed from game to game, or even mid-game if he wanted to create new problems for the opposition, or if he was forced to adapt to the other team. He is an incredibly pragmatic coach who is also extremely imaginative with his tactics.

For the most part, however, Potter used a back three – usually in a 3-4-3 with two number 10s behind one striker, in or a 3-4-1-2 with one 10 behind two centre-forwards. He developed his Brighton team so that they could swap between a 2-1 and a 1-2 up front during a game, depending on what the specific moment or match required.

So far at Chelsea, Potter has flitted between back-four and back-three systems, usually with two number 10s supporting a single centre-forward. When he plays with a back three and wing-backs – as was the case at Brighton – there have been times when Potter has used attacking players in the wing-back positions. Players such as Raheem Sterling, Christian Pulisic or Ruben Loftus-Cheek in these roles means improved one-on-one ability out wide. Because these players are always keen to get forward, they add an extra attacker into the front line, especially when play is built on the opposite side (below).

Chelsea’s central midfielders rarely move ahead of the ball, so wingers playing at wing-back can make runs inside the 10s to support the number nine. Marc Cucurella has also been used as a wide centre-back on occasion – as he was under Potter at Brighton – with the freedom to push forward and become a wing-back during build-up. This pushes the wing-back ahead of him even higher, or frees them to rotate and move inside. Chelsea will often convert into a back four mid-game, just like Potter’s Brighton side did.

When Potter has instead started with a back four, he has usually used a 4-2-3-1. The full-back-and-winger pairs on each side then have the freedom to rotate, make runs beyond the opposition’s last line and disrupt the defence. The number 10 will then support wider build-up on both sides, with a dropping centre-forward playing a key role in switches of play by moving away from the opposition centre-backs to receive and move play out to the opposite wing.

At first glance, there are few problems with the Chelsea defence: only three teams have conceded fewer goals in the Premier League so far this season, and they rank among the division's top teams for duels, tackles and interceptions per minute of opposition possession. They have only kept six clean sheets from 19 games, however, and their wastefulness at the other end – they are the lowest scorers in the top half by a mammoth 10 goals – means the goals they do concede are particularly damaging.

Potter’s league defeats have come against Fulham, Manchester City, Newcastle, Arsenal and Brighton – all of whom are currently in the top seven. In these games, they have conceded both chances and goals from wide areas, with defenders in central areas often losing track of runners when the opposition build play out wide. The gaps between the centre-backs in these situations (above) has also given cause for concern, with Thiago Silva often dragged out from his position as the middle of the three centre-backs.

Under Potter, Chelsea have mostly defended their own half in a 5-3-2 shape. In this formation, the three in central midfield naturally protect the space between the lines well, and force the ball wide. From here, though, they need to be more aggressive in supporting inside the wing-backs to limit the crosses, cut-backs and combinations that are causing the back line so many problems.

Despite Potter going nine unbeaten at the start of his Chelsea tenure, and getting Chelsea into the knockout stages of the Champions League, there has been a persistent problem with a lack of goals. Kai Havertz is their top scorer in the league with five goals, and Chelsea are particularly toothless when playing away from home. They’ve scored nine goals in 10 away league games; by way of comparison, Brighton have 19 in nine, Tottenham 16 in nine, and both Manchester City and Newcastle are on 15 from nine.

Chelsea’s goals – and a large portion of their chances – under Potter have come from quick and incisive wide combinations, followed by penetrative runs in behind (below). These don’t necessarily come on the counter-attack, but they do involve an obvious change of tempo to their play. They aim to draw the opposition into the wide areas and then slide runners in behind to cross or cut the ball back. Getting the ball out to their wingers more quickly will help create more one-on-one situations for their most dangerous dribblers, while Mason Mount or Havertz moving wide to create overloads near the touchline will make it easier to find opportunities to put crosses into the box. The only issue here is that, when Havertz moves wide, Chelsea lose one of their best aerial threats.

The return of players like Ben Chilwell and Reece James will help Chelsea create more and better chances. Both players are fantastic attacking assets in the wide areas with their crossing, and they also move inside to help overload the spaces between the lines. Defenders and wing-backs scored a large number of Chelsea’s goals under Thomas Tuchel. Potter could do with their contributions now.

When Potter took over, he went unbeaten in nine, won Chelsea’s Champions League group and, with nearly a fully fit squad to choose from, had Chelsea starting to look like his team. However, injuries have led to a big dip in form.

That said, most of their defeats have come by a single goal, with their performances demonstrating – at least in periods – that they can still compete against the league's best, even with a depleted squad.

Returning players will help Potter establish his playing style fully, particularly the back-three system he likes to use. James, Chilwell and N'Golo Kanté are just three of the important players who Potter has been without for a long time. James and Chilwell are particularly crucial to Chelsea establishing effective pairs out wide (below).

Then there are the new additions. João Félix is an exceptional player to have doing work between the lines, which should help Chelsea create more. He rotates effectively, moves wide to find space, and links brilliantly with wider runners – whether an overlapping wing-back or a winger or number 10 who has penetrated inside. He and Mount can play as two versatile and hard-working 10s in Potter’s 3-4-2-1 formation, and they should provide similar rotations to those we saw at Brighton. Sterling, Pulisic and new signing Mykhailo Mudryk love making penetrative runs in behind, as well as dribbling at their opponent.

Obviously these actions alone are useful, but they also have the added benefit of creating space between the lines for Félix and Mount to operate in. Once Potter has a fully fit squad to select from, and when the recent arrivals have settled in, Chelsea should have the quality to compete against just about any opponent.