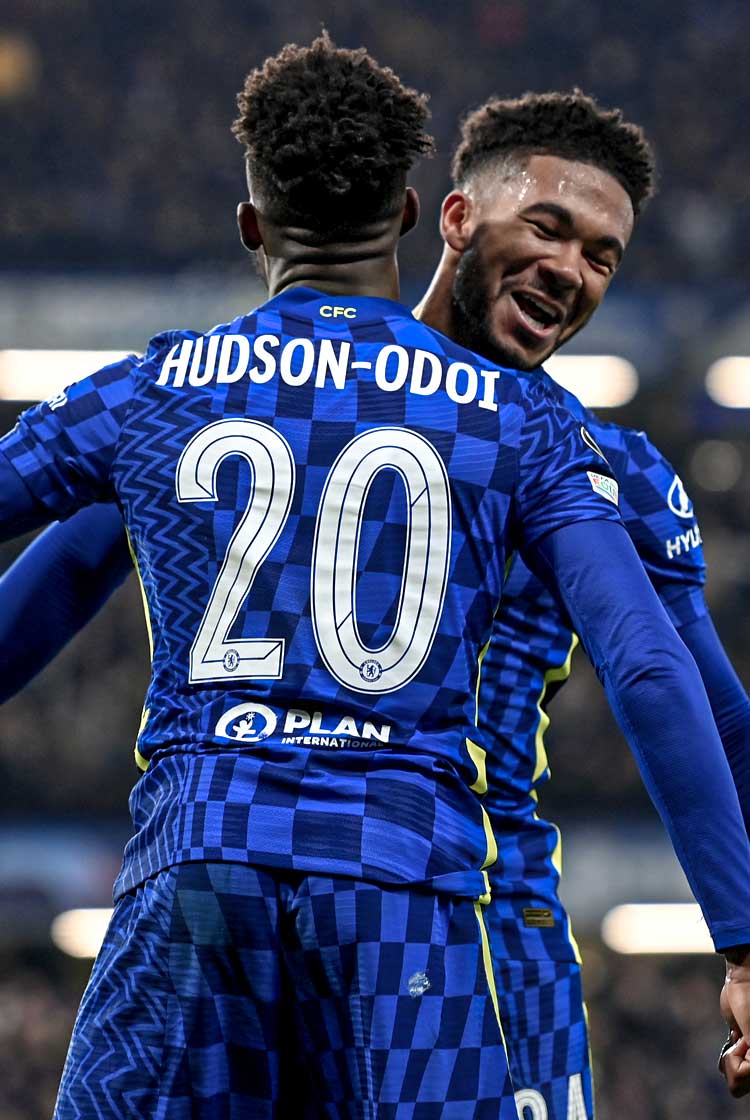 Chelsea stormed into the Champions League knock-out stages with a convincing win over Juventus at Stamford Bridge. It was their goalscoring defenders who once again set Thomas Tuchel's side on their way in his 50th game as Chelsea manager. Trevoh Chalobah opened the scoring from a corner, before the in-form Reece James slammed home another to double the hosts' lead. A third academy graduate, Callum Hudson-Odoi, added another shortly afterwards, before Timo Werner got in on the act late on to wrap up a win that takes Chelsea top of Group H with one game left to play.

With the clean sheet, Tuchel set a new English top-flight record for the fewest goals conceded in any manager's first 50 games in charge. Chelsea have let in just 24 goals since he took the job in January 2021. "Fantastic match – 50 times already," Tuchel said. "It's a pleasure to be at the club every single day. It's a pleasure to be part of this team. The team has a fantastic attitude, is determined and hungry. We want to keep this energy and atmosphere in the group."

Clever build-up to access Ziyech
Chelsea used a 3-5-2 structure with two high number eights in N’Golo Kanté and Hudson-Odoi. Hakim Ziyech acted as a number 10, often moving away from Christian Pulisic, who stayed high as the main centre-forward. Jorginho took up the single pivot position ahead of the back three, and wing-backs Reece James and Ben Chilwell provided the team’s width, taking up positions around the outside of Juventus’ 4-4-2 block. Jorginho’s positioning between Juventus’ two centre-forwards helped connect from the defence into Ziyech (below). Whenever the visitors’ forwards narrowed to block off passes into Jorginho, Chelsea’s wide centre-backs stepped out with the ball. The number eights then moved higher, creating another route into Ziyech between the lines.

Left-sided rotations
As the first half progressed, Hudson-Odoi and Chilwell rotated well, with Ziyech moving over to provide support on the left. Here, he proved more difficult for Juventus to pick up – not just because he was receiving on the move, but also because Juventus’ midfield line often narrowed to prevent direct access into Ziyech between the lines. Chilwell then made narrower runs inside, often attacking into the penalty area, with Hudson-Odoi moving around the outside (below). On the other side, James held the team’s width and rarely rotated with Kanté, who stayed inside. When Loftus-Cheek replaced Kanté, however, rotations became more common on Chelsea's right.

Space for Rüdiger
Chilwell and Hudson-Odoi were aggressively marked by the players on Juventus’ right after the visitors changed to a 4-2-3-1 shape in the second half. Ziyech then made more movements out to Chelsea’s right, and the home side found space to attack in the left inside channel, with Rüdiger frequently stepping out of defence to progress around the visitors’ midfield three (below). Hudson-Odoi also dropped towards the ball, drawing right-back Juan Cuadrado away from the back line. He then managed to penetrate beyond the Juventus defence following combinations with either Ziyech or Pulisic, or through his own individual play. With Juventus posing little to no counter-attacking threat down Chelsea’s left, the rest of Chelsea’s back line could concentrate on stopping Juventus’ left side when required, allowing Rüdiger to advance even further with the ball.

Left-sided build-up, right-sided penetration
With Chelsea constantly breaking into the final third, Rüdiger’s high position almost made him a second pivot alongside Jorginho. Juventus defended extremely deep, leaving only one player high in the attack. This meant Chelsea’s two remaining centre-backs had an overload, while the team was still able to commit players forward to the attack. Pulisic was supported in close quarters by both number eights, while Ziyech moved freely between the lines (below). Ultimately, though, it was Rüdiger’s high position on the left that was key to the build-up before Chelsea’s second and third goals, which came in quick succession. In both cases, left-sided build-up helped create runs and movements from Chelsea’s right, with James and Loftus-Cheek influential once Chelsea had penetrated into the penalty area.

Converting from a 4-4-2 to other shapes
Against Chelsea’s 3-5-2 shape, Juventus manager Max Allegri moved Adrien Rabiot inside from the left of their out-of-possession midfield four to create a temporary midfield three (below). This allowed one of the two initial central midfielders to drop back and support the centre-backs during deeper build-up, and also to help combat Chelsea’s higher pressing. On the left side, full-back Alex Sandro had more space to push forward, but was often isolated and had to wait until one of the attackers moved across to support him. On the right, Weston McKennie held his position with support from right-back Cuadrado. As the higher of the two original central midfielders, Rodrigo Bentancur also pushed forward though the right inside channel when possible, helping create triangles and third-man combinations with Cuadrado and McKennie. When this happened, Rabiot moved infield to operate as the second central midfielder. Due to a lack of numbers on the left, Juventus’s attacking play was fairly limited, but they looked more dangerous down the right early on.

Improving play in possession
Leonardo Bonucci often helped Juventus break into midfield from a central position in defence. With Rabiot coming in off the left, one of the centre-forwards dropped in to add another player to the midfield unit (below). As a result, Chelsea were forced back into a mid-block, and Ziyech withdrew into midfield. This gave Bonucci more time to pick his forward passes, and also gave him an extra option to find in midfield. Once Juventus established more balance on both sides of the pitch, they began to progress forward more consistently, with Bonucci the main link into the front line.

Struggling with Chelsea’s pressure
A change of shape to a 4-2-3-1 ultimately ensured a permanent three in the Juventus midfield. However, Chelsea responded by pressing high once again, with single pivot Jorginho jumping out to press more than before. Whenever Ziyech pressed aggressively alongside Pulisic, Juventus struggled to penetrate centrally. Chelsea’s number eights covered the inside channels around Jorginho, with the front line also pressing from behind the visitors’ central midfield when the ball was in that area of the pitch (below). The visitors then struggled to retreat following their central progression into Chelsea’s pressing trap. As a result, their isolated front line was unable to influence the game.

Changes of personnel came too late
Juventus made a string of changes, with Arthur introduced in the double pivot, and Paulo Dybala as a number 10 underneath Moise Kean as the centre-forward. Juventus’ full-backs still provided the attacking width, attempting to build around Chelsea’s converted 5-3-2 defensive block (below). Dybala and McKennie rotated on the right, searching for spaces between the lines and somewhere to receive away from Jorginho. Although this helped Cuadrado receive higher, the damage had already been done, and the visitors were unable to break through Chelsea’s back line of five. Once Juventus progressed around Chelsea’s block, they lacked the presence to challenge the visitors' three centre-backs following balls into the box.