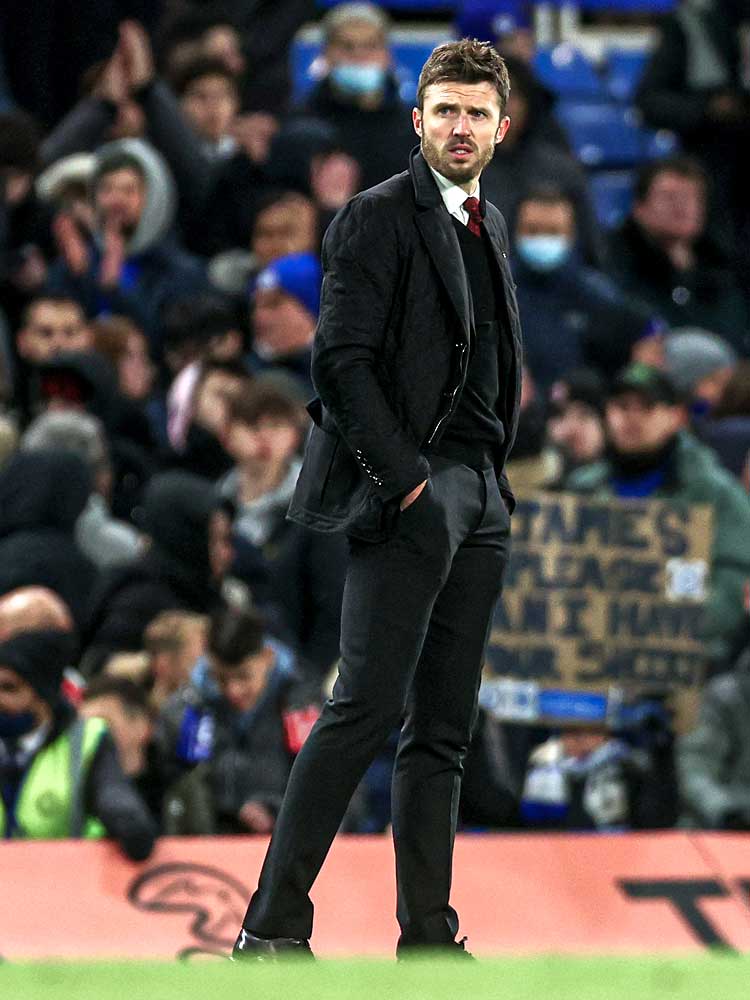 Manchester United's last match before the appointment of Ralf Rangnick ended in an encouraging draw at Chelsea. On an afternoon when they were largely forced to defend, and left Cristiano Ronaldo on the bench, they took the lead after Jadon Sancho capitalised on a dreadful mistake by Jorginho early in the second half. The Italian midfielder later struck an equaliser for the home team from the penalty spot, keeping Chelsea one point ahead of defending champions Manchester City in the Premier League table.

Chelsea's manager Thomas Tuchel, one of many modern coaches hugely influenced by Rangnick, said: "I saw a huge effort. We put the pressure up high; we were brave and courageous. While they defended deep, we needed the first goal to open up a bit. If you don't score you always run a bit behind; you feel you are the stronger team." His opposite number, Michael Carrick, said: "I'm slightly disappointed. We went ahead. We came here to win. To go 1-0 up and have it taken away from you is disappointing. That intent and that hunger summed us up today. We knew it wasn't going to be free flowing football at times, but we were prepared to dig in."

Overloads in wide territory
Chelsea were organised into a 3-4-3 formation built on a back three of Trevoh Chalobah, Thiago Silva and Antonio Rüdiger (below). Reece James, the double pivot of Ruben Loftus-Cheek and Jorginho, and Marcos Alonso formed their midfield four, behind a front three of Hakim Ziyech, Callum Hudson-Odoi and Timo Werner. The hosts prioritised creating overloads out wide, where combinations between Chalobah, James and Ziyech on the right, and Rüdiger, Alonso and Hudson-Odoi on the left, represented their likeliest source of creativity. Their commitment to playing with width stretched United's back four, creating spaces infield to play through.

Contained by the opposition
The hosts enjoyed the vast majority of possession, but found themselves limited by a determined Manchester United defensive performance. The United front three worked to engage Chelsea's back three, while Fred remained sufficiently close to them to discourage Chelsea from playing through midfield whenever one of United's forwards moved to take an opposing central defender. Nemanja Matic and Scott McTominay focused on protecting the space between the lines (below). When necessary, they would mark Jorginho and Loftus-Cheek, or follow the Chelsea front three if any of them withdrew into deeper territory. There were periods when United pressed with aggression, to some effect, and others when they adopted a mid-block. They were more effective when they pressed, but doing so to the level required proved difficult for the entire match.

Trapped by a midfield cage
United adopted a cage-like structure (below) to attempt to contain Jorginho and Loftus-Cheek, and to prevent them from playing through midfield. Where possible, pressure was applied to the ball, ensuring that Chelsea could only access their wing-backs via lofted passes that provided time for United's full-backs to move and challenge for possession. Matic often looked to withdraw into defence to maintain the visitors' compact shape and potentially target second balls.

Continued focus on wide attacks
Faced with a United block set up to prevent them from building possession through central territory, Chelsea focused on progressing the ball in wide areas. Their wing-backs and wide attackers combined to create two-on-ones against United's full-backs (below). The security afforded by the three central defenders and two central midfielders gave the wing-backs increased freedom to adopt attacking positions in the knowledge that there was protection against potential counter-attacks behind them.

Set up to contain and counter
Michael Carrick, in charge of United for the second and final time before the arrival of Ralf Rangnick, set his team up in a 4-3-3 formation that looked prepared to spend most of the game out of possession. Aaron Wan-Bissaka, Victor Lindelöf, Eric Bailly and Alex Telles formed an unfamiliar back four; Nemanja Matic, Scott McTominay and Fred represented a cautious midfield three, while Marcus Rashford, Jadon Sancho and Bruno Fernandes started in a mobile front three. Carrick's priority appeared to be to select personnel capable of applying an energetic, high press, and with potential on the counter-attack. Despite Chelsea's aggressive press, the back four positioned thesemlves further forward than usual (below) in a bid to to maintain compactness between the lines. From here, they looked for space in behind for the runs of Rashford and Sancho, with Fernandes often withdrawing to link play in what at times looked like more of a midfield diamond.

Troubled by an aggressive press
In possession, United's attempts to build out from the back were repeatedly disrupted by the hosts' aggressive press. This was man-oriented (below), and Chelsea's compact shape limited United's in-possession options, forcing them to execute longer passes that often led to Chelsea regains in the attacking half. As has come to be expected from a Thomas Tuchel teams, Chelsea's press was effective. United registered only three shots across the 90 minutes.

Threatened by swift counter-attacks
When trying to build possession from the back, Carrick's team faced a Chelsea press led by the front three of Ziyech, Werner and Hudson-Odoi (below). Behind that front line, support was provided by the relevant wing-back – Marcos Alonso was later replaced by Mason Mount – and in central territory by Jorginho and Ruben Loftus-Cheek. The quality of this press led to numerous Chelsea regains in their attacking half, with United then having to deal with the threat of swift counter-attacks. The hosts' total of more than 20 attempts on goal over the 90 minutes underlines their threat, even if they weren't at their clinical best.

Relying on Rashford and Sancho
United consistently proved limited when they had the ball, and therefore created few goalscoring chances. The aggressive press applied by the hosts frustrated United in their attempts to build momentum and pose a creative threat. That said, the presence of Sancho and Rashford in their attacking line, and the runs they made in behind (below), meant that they continued to offer potential on the counter-attack. The nature of their goal, albeit coming from a terrible mistake from the usually reliable Jorginho, demonstrated that potential.