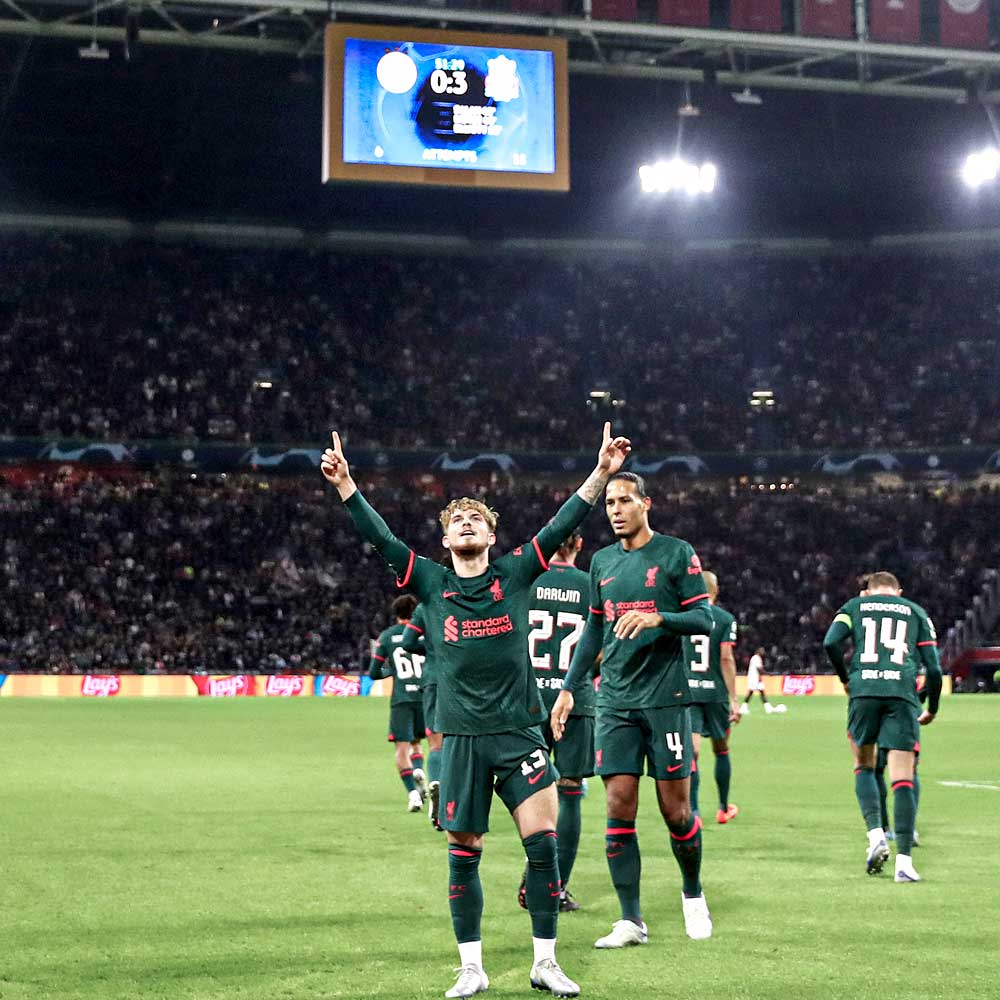 Liverpool strolled into the last 16 of the Champions League thanks to three goals in 10 minutes either side of half-time against Ajax. Mo Salah, Darwin Núñez and Harvey Elliott were on the scoresheet as Jürgen Klopp's side wrapped up a fourth successive win in Group A, but they faced a few early scares. Steven Berghuis hit the post when he probably should have scored, and only a Trent Alexander-Arnold block denied Dusan Tadic the opening goal. Once Liverpool found their feet in the game, though, they created enough chances to win comfortably and secure their place in the knockout stages. In their final group-stage game, they will need to beat Napoli by a bigger scoreline than the 4-1 defeat they suffered in Italy if they are to finish top.

Klopp was nevertheless delighted at the result. “Nobody should ever take for granted qualifying for the knockout stages of the Champions League," he said. "We did it again in a game that started off really tricky and that makes victory even sweeter. Ajax are a really good team and we beat them twice. They were the better team for the first 35 minutes, they were more settled than us. We are really happy about going to the last 16. It’s great.”

Alfred Schreuder set Ajax up in a 4-3-3 shape, and came up against an aggressive Liverpool press deep in their half. Liverpool’s wingers narrowed to press Ajax’s centre-backs, with centre-forward Roberto Firmino screening the hosts’ deepest central midfielder Edson Álvarez. The Liverpool number eights started narrow, but pressed deep into the wide areas as Ajax looked to build around Liverpool’s narrowed front line (below). They then played back inside into the dropping centre-forward, Brian Brobbey, particularly when up against Joe Gomez in Ajax’s left inside channel. This proved a decent route out from the back and into Liverpool’s half, with Steven Berghuis hitting the post from close range early on.

The hosts' left side provided a route out from the back, and chances for those on the right. Left-back Daley Blind pushed forward, supporting Dusan Tadic and Brobbey, who moved over to this side (below). On the other side, right-back Jorge Sánchez inverted, Steven Bergwijn held the width and right-sided number eight Davy Klaassen pushed forward, often filling in up front after Brobbey’s movements wide. Single pivot Álvarez helped connect the centre-backs to midfield and the advancing full-backs, while left-sided number eight Berghuis joined attacks later than Klaassen, often on the second phase of the attack.

After conceding two quick goals in the second half, wingers Tadic and Bergwijn swapped sides. Tadic provided inswinging crosses and moved inside off the ball, often taking up spaces in the centre of the pitch. Bergwijn carried the ball forwards at pace, before attempting to cut inside on to his right foot. Replacement left-back Owen Wijndal overlapped aggressively to try to create two-on-one situations against Trent Alexander-Arnold (below), while substitute centre-forward Mohammed Kudus made runs through the left inside channel to add another body here.

Central movements between the lines

Despite going three goals down, Ajax still tried to find players between the lines, bouncing the ball back to draw Liverpool’s central midfielders out of position. Single pivot Álvarez dropped into the back line and the hosts’ full-backs pushed on to provide the attacking width, with neither inverting. Tadic then moved inside to receive between the lines (below), before looking to connect into the overlapping full-backs or find Kudus’ runs in behind. However, Ajax lacked cutting edge in front of goal all night.

Liverpool operated in a 4-3-3 shape, with left-back Andy Robertson providing the width on his side. Right-back Trent Alexander-Arnold was more reserved with his positioning, with number eights Jordan Henderson and Harvey Elliott dropping into defence to support deep build-up. The number eights also pushed forward when Liverpool moved up the pitch, running beyond Roberto Firmino, who consistently dropped deep to receive. Mo Salah and Darwin Núñez narrowed two form a front two (below), and in doing so created a 4-4-2 diamond shape for Liverpool. Salah would also drift wide occasionally, creating the attacking width on the right, but he was often isolated here and would move back inside.

Liverpool’s threat in behind Ajax’s back line helped pin the hosts into their own half, with Alexander-Arnold and Robertson in particular finding more space to push forward. The increased space that was created in midfield helped Liverpool maintain longer spells of possession, and tipped the game’s momentum in their favour. Núñez occupied the spaces around Ajax’s right-back, which helped free up Robertson to join in Liverpool’s attacking play (below) and, on occasion, Henderson through the left inside channel. Liverpool took the lead after Henderson regained possession on the left and found Salah’s well-timed run in behind. Higher, more penetrative movements from the front three led to better chances. Núñez should have doubled the visitors’ lead from close range moments after the opener.

Liverpool started the second half well, with the front line high and central to pin back the hosts’ defence and set the tone for the half. Henderson helped cover Robertson’s advances down the left by taking up a withdrawn position, while Núñez moved inwards to join Salah and Firmino in the middle. Elliott had more freedom to push forward and join the narrowed front three on the right, with Salah moving inside and also dropping into deeper positions to disrupt the hosts’ centre-backs (below). Liverpool’s third goal came after Salah did just this and then fed Elliott through the inside right channel.

The visitors’ passing combinations on their right proved effective in the second half, as Alexander-Arnold repeatedly reversed balls back inside into Elliott, who then looked for Salah in behind (below). Alternatively, as was the case for Liverpool's third goal, a dropping Salah connected into Elliott who ran in behind. Joe Gomez’s incisive forward passing from centre-back was also key in allowing Liverpool to break forward, slicing through Ajax’s first line on the inside of Bergwijn. Once Ajax’s left winger narrowed to cut off this particular pass, Alexander-Arnold was free to receive on the outside. He could then step forward and draw out Ajax’s left-back, creating even more room for penetrative runs from Salah or Elliott. Liverpool were ultimately good value for their win.